Let us begin with the proviso that the Biden team is really smart. They ran the campaign as a referendum on Trump’s perceived insensitivity to CoronaVirus which was smart. But they know that one area where even their base liked Trump was the economy. And how did Trump define the economy in the minds of the people? The Stock Market.

They also know that Trump will retain his hold on a very large portion of his 73 million voters and that will represent a sizable head wind for the Biden team. So if they can keep the stock market high & higher, then they might be able to neutralize Trump’s biggest mindshare advantage next year.

So, as we see it, the Biden team has gone “Trump-er” than even Trump. That is why they selected Janet Yellen to be their Secretary of Treasury, the one who might have greater influence within the Fed than even Chairman Powell. And they have kept Lael Brainard at the Fed as a leash on Chairman Powell to ensure he remains dovish in 2021. In their determination to out-intellectualize FMOC & Fed staff, they have added Roger Ferguson, a Fed-heavyweight himself, and Ken Chennault, the Amex CEO.

This is a team with true progressive firepower that can intellectually dominate the Fed if necessary. Led by Yellen, you can depend on these progressive thinkers & credible implementers to keep the Powell Fed onto the straight & narrow dovish path. Just how progressive is Janet Yellen? Read what she said on CNBC back in April 2020:

Fast forward to late next year. By that time, the growth spurt expected from Vaccines & stuff would have been realized. That would lead to lower & lower appetite for fiscal stimulus especially if Senate remains Republican. Also the massive spurt in debt would have begun to influence rates down: 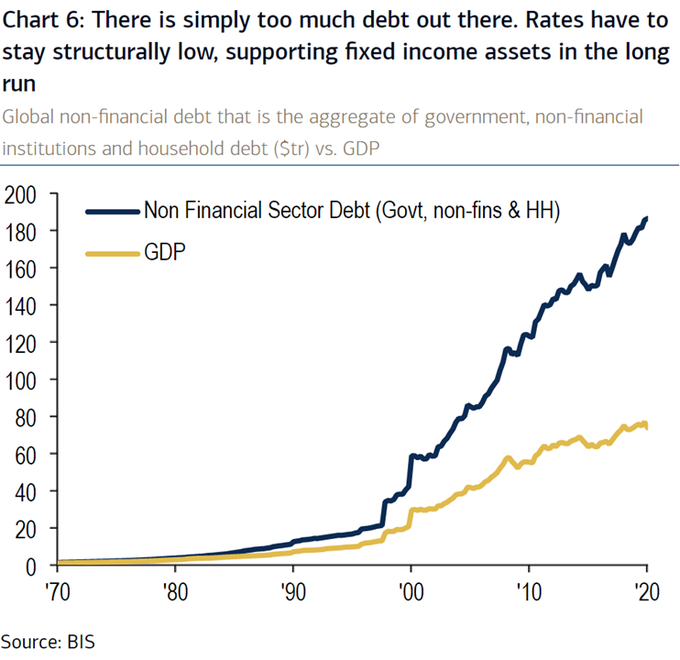 The belief that the debt load would lead to lower future growth & lower inflation has other smart adherents who have been more right than wrong on rates, including Bob Michele of JPM Fixed Income Asset Management & the decidedly un-rosie Rosenberg.

So what to do when rates are already down & going downer and you need more stimulus? Enter the highly respected progressive economist Yellen who, backed by the Bernanke school, could persuade the Congress to allow the Fed to buy broad stock market indices such as the S&P 500.

Ask yourselves. Would the Biden team love to go into the 2022 election with S&P 500 at 5,000 and Dow at  40,000? Would it give them enough firepower to negate Trump’s greatest strength, the market-determined confidence in the economy? You know the answer!

If you think this is fanciful, read Janet Yellen’s chief complaint about the Fed:

Especially far more restricted than the most progressive big central bank out there! Yes, the central bank that already owns a chunk of their own stock market: 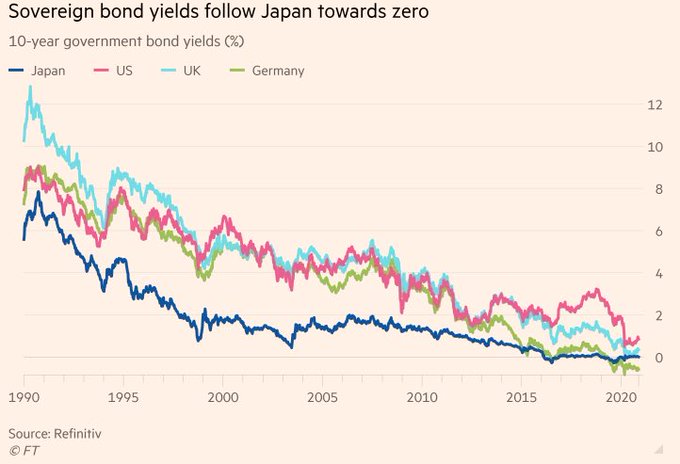 What is THE characteristic of true progressives? They wear with pride the label heaped on them as an insult by the conservatives! We have no doubt that Janet Yellen and the Biden team would be proud to convert the old-fashioned Fed into a S&P 500 buying progressive central bank that works hand-in-hand with the Yellen Treasury.

Does the above answer the question David Rosenberg asked this week?

Getting the Congress to create a Fed Unbound, free & unrestricted from its hidebound past? That would be much bigger than Rubin ever contemplated let alone did!

Is that what the stock market was looking forward to when they trumpeted the choice of Janet Yellen as Treasury Secretary?

Finally what would be another simple tactic to demonstrate that the Biden team is Trump-er than Trump? How about proposing a tax cut for the middle class & low income workers? And how about linking this deep desire of Trumplicans with a simultaneous proposal to restore the deductions for State & local taxes from Federal Taxes? Remember that the Biden team & their backers are mostly from high tax states on the two coasts such as California, New York-NJ-CT, Massachusetts.

Is that whiff the reason for a weird outperformance since the election? The outperformance of funds like  PNF, the Pimco NY Municipal closed-end fund, over the rocketing SPY in November:

Where do the majority of large money managers live? The same high tax states. Is that another reason we see happy happy investors, or as some might say excessively optimistic investors? 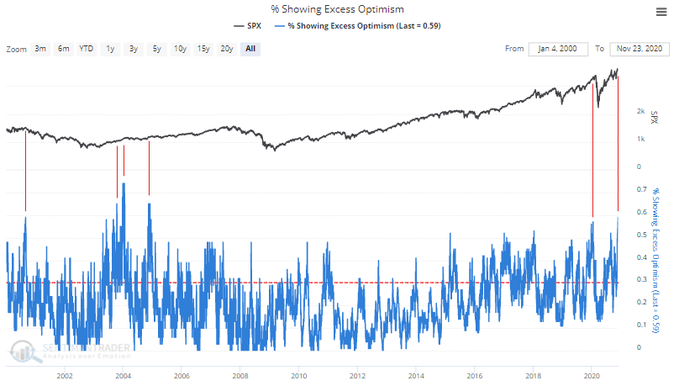 Isn’t excess optimism a Trump thing or actually a Trump-er thing? And doesn’t that work for longer than one might imagine? By the way, what is 32% higher from here? Around 4,800. Isn’t that the target for 2021 from some firm? 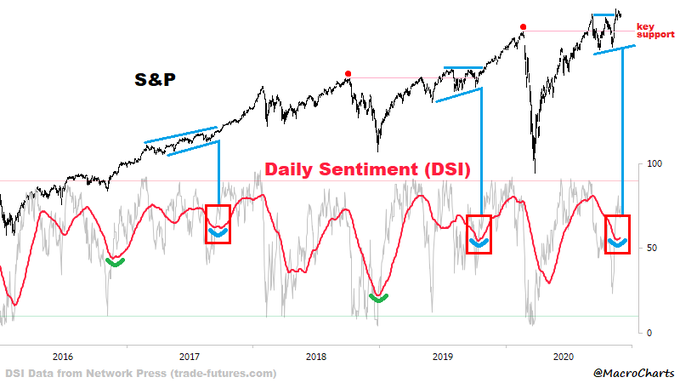 Is there a bullish contrarian behavioral indicator to support the above?

That’s fine & dandy. But is there a firm willing to predict a melt-up rally from here?

Did you notice the weird action in the VIX at NYSE open on Friday? VIX broke 20 to the downside & then reversed above 20. Then it went above 21 later in the day to close just below 21. 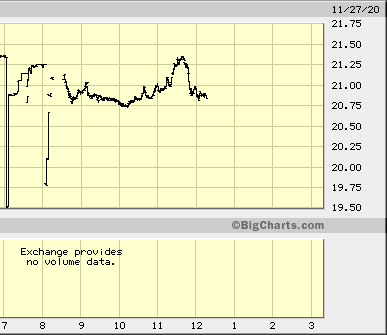 Does this VIX action jive with the DeMark 13 count below? 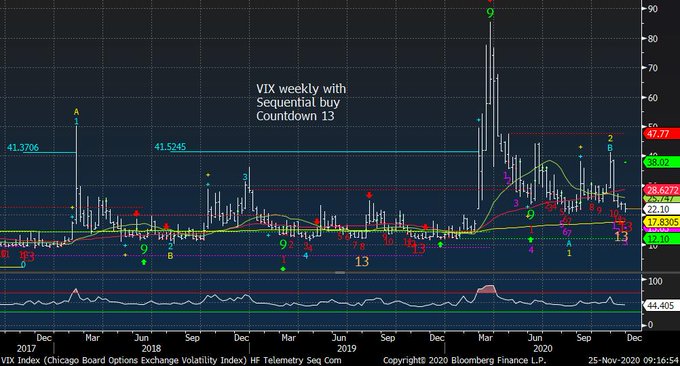 When do you see euphoria in optimism? When even the perma-bears turn positive! 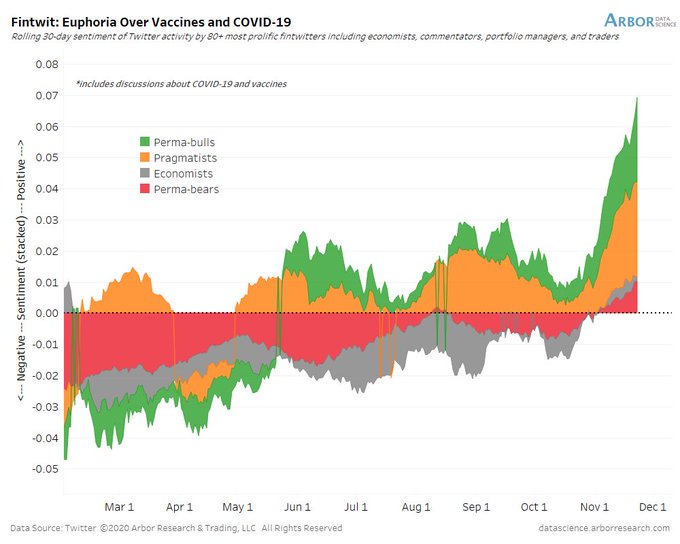 Economic optimism is contrary to owning bonds, right? So if economic sentiment is euphoric, then shouldn’t bonds be oversold? 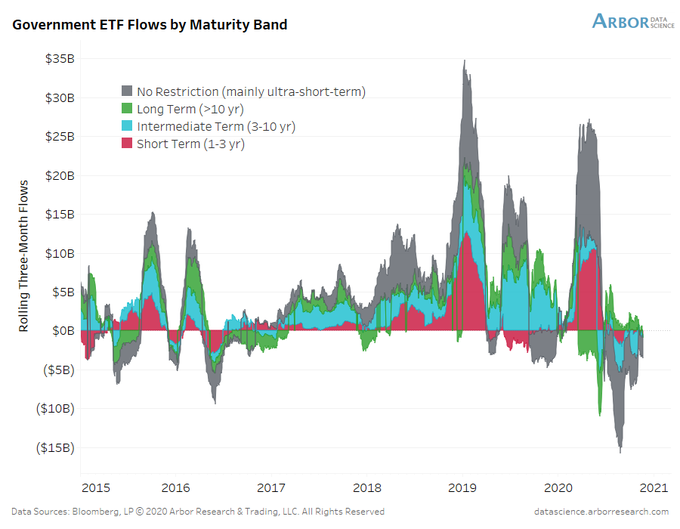 Such a contrarian move might also be suggested by weakening economic data. At least weakening data per our favorite un-Rosie:

But shouldn’t the Copper-Gold relationship also be signaling this? Or is it about to? 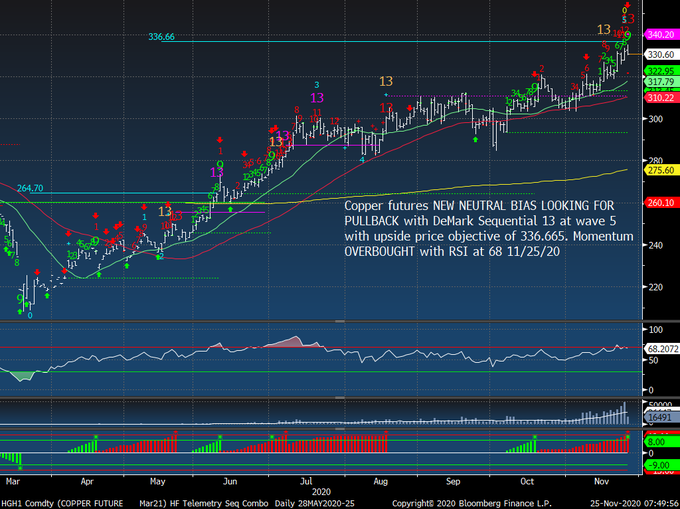 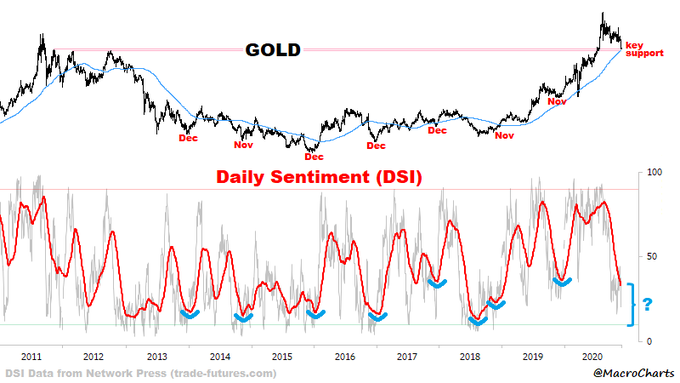 If Gold turns up & Copper pulls back, that would indeed support a lower move in Interest rates. Remember NDX PE goes higher as Treasury rates fall. And shouldn’t small cap stocks represented by Russell 2000 see a pullback as well? How stretched are small cap stocks? Look at the BAML chart below, courtesy of Market Ear: 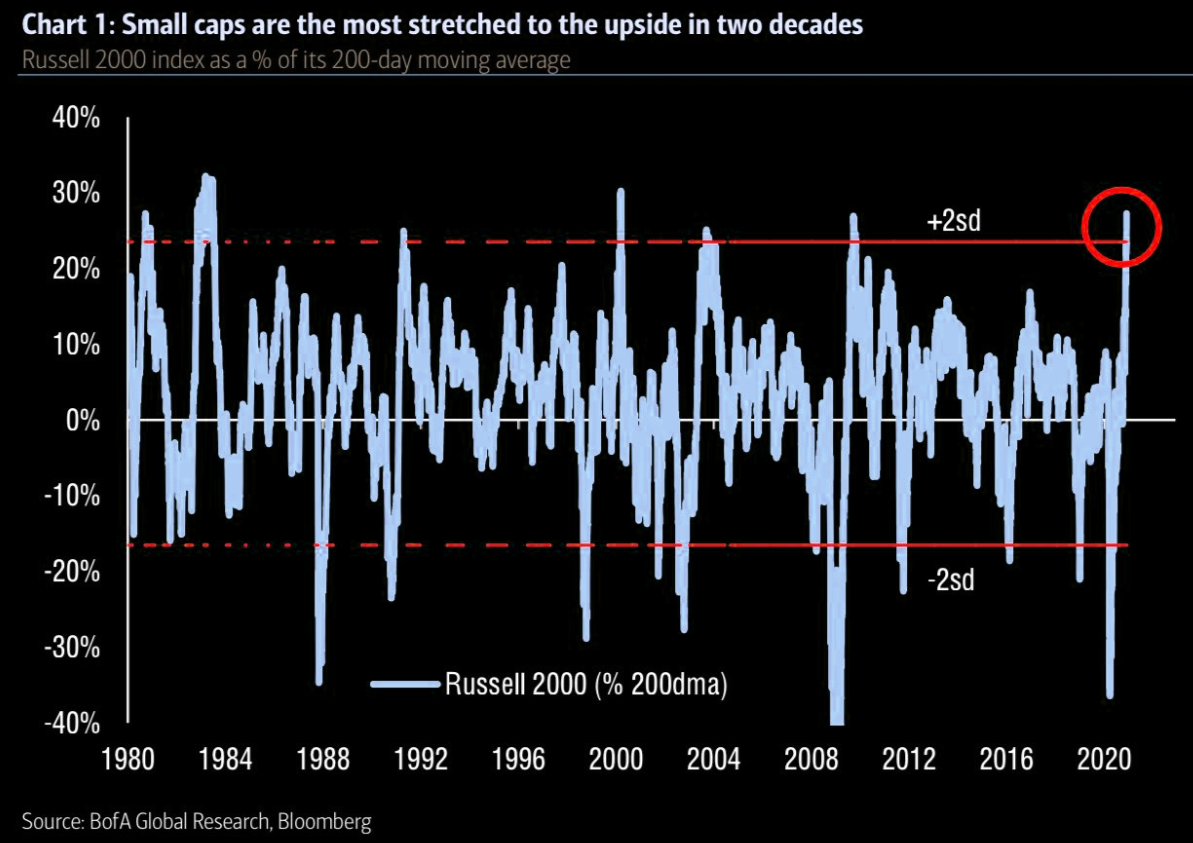 Is there a trade here? Market Ear thinks so: 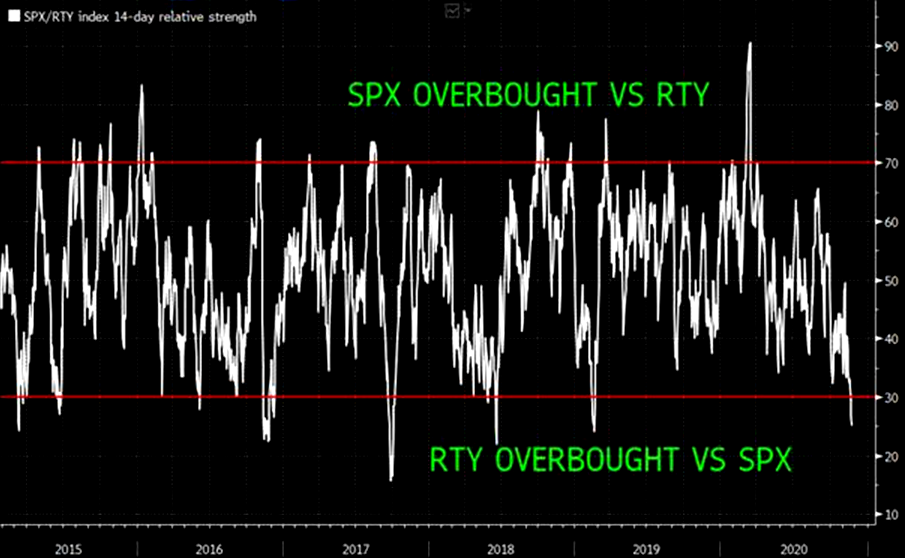 Or does the chart above only suggest shorting RTY vs. SPX? Either way, this trade would be consistent with Treasury rates falling some & Gold outperforming Copper.

Given that this is Thanksgiving Week, allow us to go from the above material to the Sublime below.

Most readers of these articles, we guess, have heard of Dara Khosrowshahi, the CEO of Uber. Almost all of them have heard of the word Shah, at least in the context of Shah (ruler) of Iran. So they might guess that Shahi, a derivative of Shah, probably means rule. That brings us to Khosrow. The first nod goes to Khosrow I (531-579), whose name became the designation of kings, at least of the Iranian Sasanian lineage (kinda like Caesar became one of Roman emperors).

With that perfunctory nod to that Khosrow, we come to a namesake to whom music lovers owe thanks. Very few remember Shah Khosrow I but there are very very few in Classical Music who have not heard of Amir Khusrau.

But before that we need to give a very big nod to Classical Music or at least the prevalent form of Classical Music pre-Khusrau. That is called Dhrupad, a colloquial term derived from Dhruva-Pad (permanent verse). This is the foundational style of Classical Music that has been documented in no less of an authority than the BhaagVat-Puraan (about 1,000 BCE), the great text which tells the tale of God & his Avataar Shri Krishna.

However, the origin of Classical Music is not derived from Shri Krishna but directly from Bhag-Vaan Shankar or Shiva. This is why the Raag Bhairav (another name for Shiva), an early morning Raag, is traditionally presented first in a concert. It is an ascetic raag, somber & serene. Below is a short recital (8 minutes) of the initial slow development of Raag Bhairav by Sayee-uddin Dagar, the 19the generation of Dagar singers of Dhrupad.

Listen to this one early morning and see what peace descends on you. By the way, his nephew Wasif-uddin Dagar (representing 20th generation of Dagar Dhrupadiye) has been a frequent presenter in New York city & his concerts are very well attended by teachers & students from NY music schools. Of course, you will hardly find any Br-Indians at these concerts.

That brings us to the great Amir Khusrau of Dehli, a great Persian scholar and a great musician from the late 12th to early 13th century. It is he who influenced the creation of a new form, a lighter & more romantic, form of Classical music which is termed as Khayal whose Persian origin means thought or imagination. He also modified the classical Veena into the Sitar which most are familiar with thanks to Ravi-Shankar.

It is this Khayal style that pervades much of today’s Classical music. And the advent of TV has also meant better looking singers wearing sadees laced with gold & adorned with ornaments. Witness the final fast phase of a romantic Raag Bhimpalasi at the Darbar Festival in London:

By the way, the yellow threads that adorn Kaushiki’s Sadi & Blouse are made of pure gold. No self-respecting woman would wear a sadi adorned by false or even lower carat gold.

The Khayal style then created lighter forms of poetry & it was sung in a light style named Thumri. Most Thumries present feelings of women towards their lovers, often sad one, Like the famous “Yaad Piya Ki Aaye” (“how I remember my lover; I can’t bear this sadness“). Men often travelled across the country & region for trade & employment. And their lovers would pine for them in their absence. Below is a presentation of this renowned Thumri. Watch the difference in Kaushiki’s facial expressions from the Khayal presentation above. That difference is not merely theatrical but reflects the difference in breathing pressure in signing the different style.

Amir Khusrau also introduced the Ghazal style (romantic poetry) and Qawali (devotional Sufi style) into India. Both remain popular to this day. Below is an example of a Ghazal by Ghulam Ali, a Napakistani singer who enjoys a large following in the Indian Subcontinent. Ghulam Ali learned this Ghazal from his teacher & won Rs. 5 three times for being the first student to learn it. In the clip below, he says he has still kept the three Rs. 5 notes with him and they mean more to him than the entire wealth of the world.

Finally, almost all of Bollywood music is inspired by the innovations introduced by Amir Khusrau Dehalvi (of Dehli).

Not many people know that India has benefited greatly from immigrants through its ancient history who brought to India their own unique culture, skills & talent. So with this section, we thank all such immigrants including Amir Khusrau who grew up in Uzbekistan & migrated to Dehli to escape. That is why he proudly called himself Dehlavi (guy from Dehli).