Look what Bob Lang, a Cramer colleague on his Real Money, tweeted on Friday afternoon:

Apparently Mark Sebastian, another Cramer colleague, agrees with the “good run” call but might disagree with choice of indices above. As Jim Cramer reported on his Mad Money show on Friday evening, Sebastian expects a “huge rally” in the Dow Jones Industrial average but not so much in SPY. Further he expects “Nasdaq to meander“. The message from Sebastian, as conveyed by Cramer, is simple – “it’s a different world now; stop being afraid, VIX in backwardation …”

Makes sense after this past week, right? Dow rallied 5.4% this week while NDX fell 1.3%.

Goldman raised their price targets substantially this week and JPMorgan raised their equity overweight to 10% from 8%. What is necessary for a buying spree? Big inflows of funds into stocks. 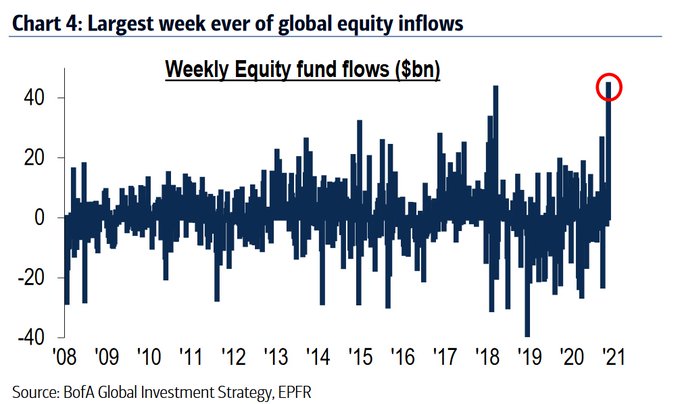 And what is necessary to support rallies from fund flows? Earnings growth, right! 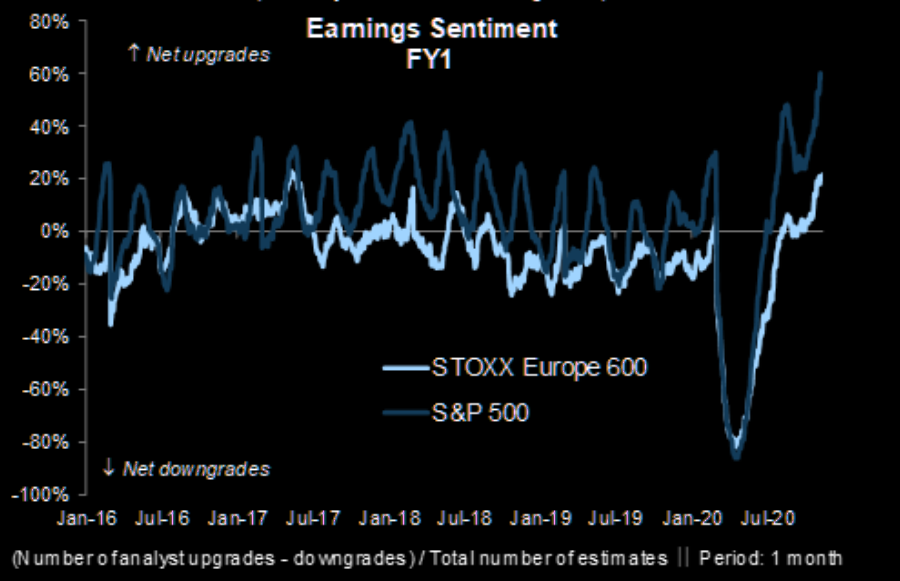 No wonder Marko Kolanovic raised his S&P target to 4,000 next year & his potential target to 4,500 by end of next year. His 7 points via Market Ear:

And the right stocks have shifted into up trends: 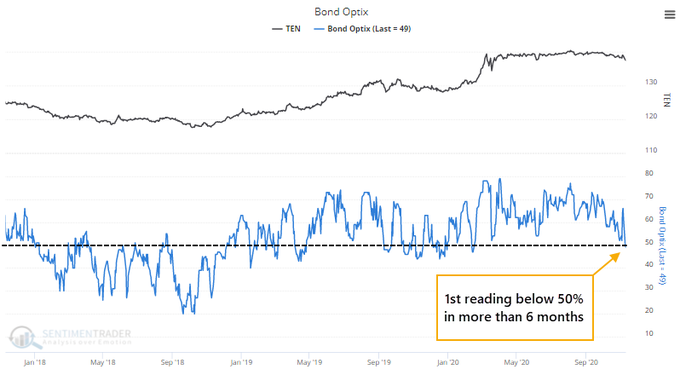 A small sour note to all the above – reportedly BAML’s Michael Hartnett points out that their Global Breadth Rule has triggered a “sell” signal with “91% of MSCI equity country indices above 50 day & 200 day moving averages“. This they say is an “early warning signal that topping process has begun“. 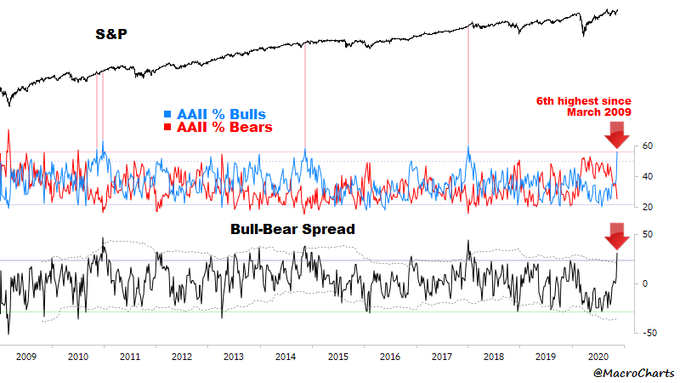 Given that all indices reached new all-time highs on Friday and BAML’s sell signal is just an “early warning”, perhaps the above series might also make important new highs into year-end.

And why shouldn’t they? Hasn’t BlackRock’s Rick Rieder said nominal GDP in 2021 will hit 5% growth?

2. On the other hand

Jim Cramer said on his show on Friday that the market has no memory. We dare to differ and say the market showed its memory on Thursday & Friday. We feel that irresponsible comments from Biden’s Covid-head about the necessity of a 4-6 week national lockdown was a catalyst for Thursday’s sell off & the 10-bps fall in Treasury yields. Friday’s rally was a given when Biden’s political advisors said no “lockdown” was being planned.

But the economy is exhibiting some signs of a slowdown in its rate of growth. Per the chart below from Market Ear, 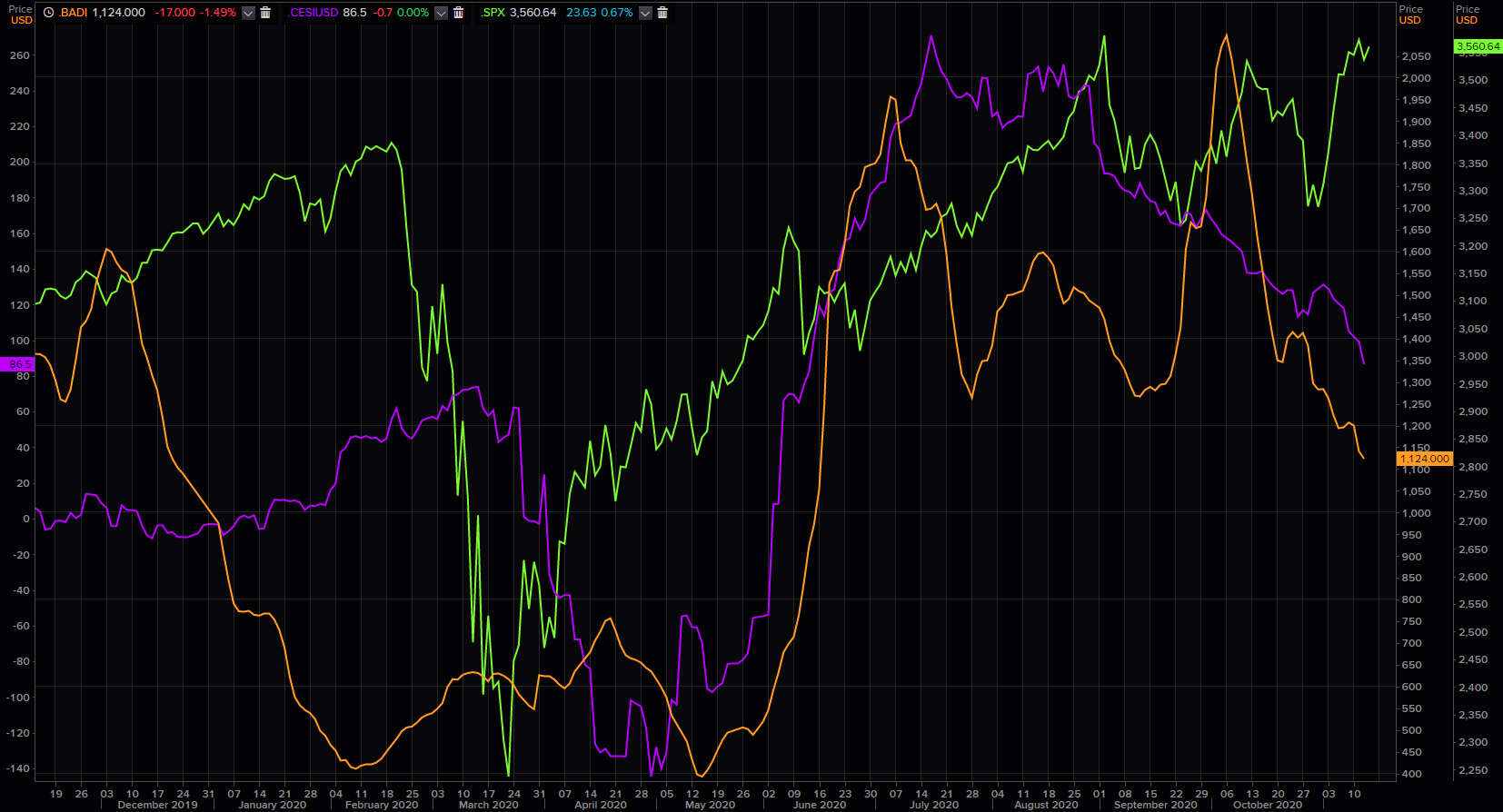 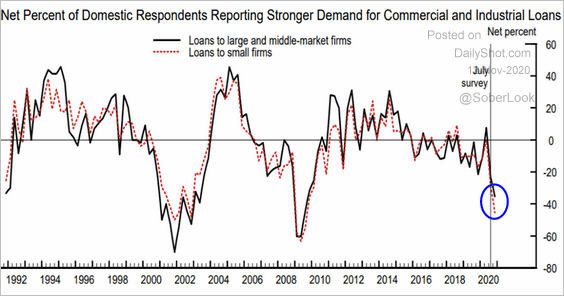 And Biden’s Covid guy wants a national lockdown into this and into the most important Senate election in recent years? Kolanovic’s 2nd bullish point calls for a “legislative gridlock” and his 4th point says “prospect for another round of fiscal stimulus has improved“. This is not an “and” but an “or” in our opinion. If Democrats take the Senate then we expect a massive fiscal stimulus. But if Republicans keep the Senate, then forget about a fiscal stimulus.

How important is a stimulus? We were surprised to hear CNBC’s Mike Santoli say on Friday after the close that the stimulus doesn’t matter to the market. That may be only true for the year-end run. Who thinks Small Businesses will do ok without a reasonably sized stimulus – a stimulus to protect tenants from eviction risk & to renew mortgage forbearance for landlords; a stimulus to protect employees from layoffs & termination?

The GOP may go along with a $500B sized stimulus that contains lower taxes for middle class but they are unlikely to spend the way Democrats want them to. This may be why even Jeff Gundlach said we could get a deflationary environment in the short run. And David Rosenberg said in their joint call that he is “in the global deflation camp; it is a high conviction call” . His blunt statement is:

His longer term suggestion is owning 25% stocks for growth & inflation hedge, 25% gold, 25% long maturity Treasuries as a deflation hedge and 25% in cash.

And both agree that this will begin playing out in the credit market & “how the credit market behaves without stimulus is going to be a very good litmus test“. That brings us to the guy who made a huge bet against credit in February 2020 and closed it in mid-late March to go long stocks around March 19-20. If you don’t remember, look at the clip below just for 60 seconds beginning at minute 3:06:

What did Bill Ackman do this week? He put on a similar short bet on in credit saying:

Ackman clarified this in his interview with FT:

Of course, simple folks can also buy an insurance policy via long duration Treasuries, as both Gundlach & Rosenberg pointed out.

Ackman does seem to mean it when it says it is different now than it was in March:

That may be why he is long stocks while buying an insurance policy in investment grade credit.

What Ackman does not address is what happens to the economy without a stimulus to tide over small businesses, landlords & tenants until we get to the El Dorado in Q2 2021? Hopefully nothing or perhaps nothing worse than a slowdown!

So what about trades or investments? Gundlach says look for closed end funds that get sold off for tax loss selling. He says the U.S. Dollar will be declining for a multi-year period & U.S. stock market may be the worst performer. He says the Eurozone is highly vulnerable & has horrible demographics. He is looking at Asia principally & thinks India over a very long term. Rosenberg also says Asia & while he says India  screens very well, he is looking at China.

We wish all a very Happy & Prosperous Diwali. In that spirit, we hope that all the negative stuff above is next year’s business and we have a wonderful continuation into year-end. And speaking of stocks, below is a lovely greeting from NSDL e-governance in India, the sister company of NDSL, the stock custody company. 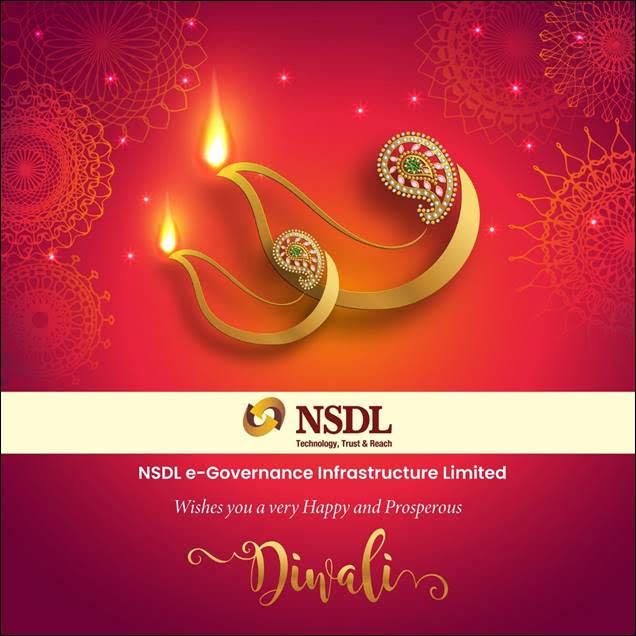