What a succinct description of this week’s stock market action from CNBC’s Mike Santoli? Was this listless action to be expected? You need energy to overcome listlessness & energy need decisiveness. That was not possible this past week because events that might create energy are on deck next week.

The Godo-lus has either to be agreed to next week or postponed to 2021. This is a binary event & might determine whether the tiring “reflationary” trade is rejuvenated or not.

Is the Treasury market the only market that seems to be moving because of stimulus news & economic outlook? Note that the Fed’s balance sheet has not even budged while Treasury yields have jumped up & down.

We hope the Fed is not waiting to see what happens on January 5 in Georgia. Perhaps they are, given that election may end up having a huge impact on Fed’s perspectives on fiscal spending, inflation & so on. But one thing we remain sure of – the Fed is absolutely & steadfastly committed to relying on the trickle-down wealth effect to stimulate spending, which may be a big reason for “resilient” action in the stock market.

Why else is December 16 important? Partly because 16th is the day the second half of December begins:

Secondly because it is the 5th day before December 23, the day the market goes into overdrive according to Larry Williams, per Jim Cramer who put up a couple of tables from Larry Williams this week in his Off the Charts segment. As we recall, Cramer said Visa is a favorite stock of Larry Williams for this Santa rally but FedEx, UPS etc should be sold because they will get “real ugly”. Also ring the register on airlines, William advised per Cramer.

The above is based on scribbled notes & on our recollection. Believe it or not, CNBC has apparently chosen to bury this clip of Cramer-Williams & not post it on CNBC.com. Those interested in watching it should contact CNBC.

IBN has exploded past JPM since the start of November despite JPM’s own big up move. Actually that has been the case since the rally began in late March. Just look at the 6-month chart below:

What about HDB, the ADR of India’s HDFC bank? Actually HDB outperformed IBN from the start of the rally until the start of December. Yet no one on CNBC, not even EM specialist Tim Seymour, has uttered a syllable about these two blue-chip banks. The reasons for the outperformance are simple. These two private banks are real growth companies that get their outperformance from banking growth; growth that is secular not only because of consumer income growth in India but also because income earners are migrating from India’s public-sector (government owned) banks to these private banks.

By the way, these two banks in particular are also the banks of choice for Indian-Americans who still have assets in India, not to mention the large number of Indian expats in the Middle East. And so is Citibank, India. This Indian subsidiary of Citi is a terrific bank. How would we love to see a spinoff stock that is 100% Citibank India?

Perhaps BAC,C,WFC, JPM got torched on Friday because interest rates fell 4 out of 5 days this week and the 10-2 curve flattened by 6 bps on the week. CNBC anchors kept talking of rates skyrocketing while Steven Major of HSBC said on BTV that “Treasury rates are probably at the top of the cycle” and said he would be “a buyer of the 10-year every time the 10-year yield gets to 1%“.

Remember Thursday, March 19, the day we noticed a turn begin in risk assets. We showed that turn in 2-day charts of various asset classes on March 19 & March 20 in our weekly article on March 20, 2020. We reproduce that 2-day chart of leveraged DPG over unleveraged ETF HYG from that article:

This has a bearing on whether the S&P is at or near a top. As J.C.Parets wrote a few days ago: 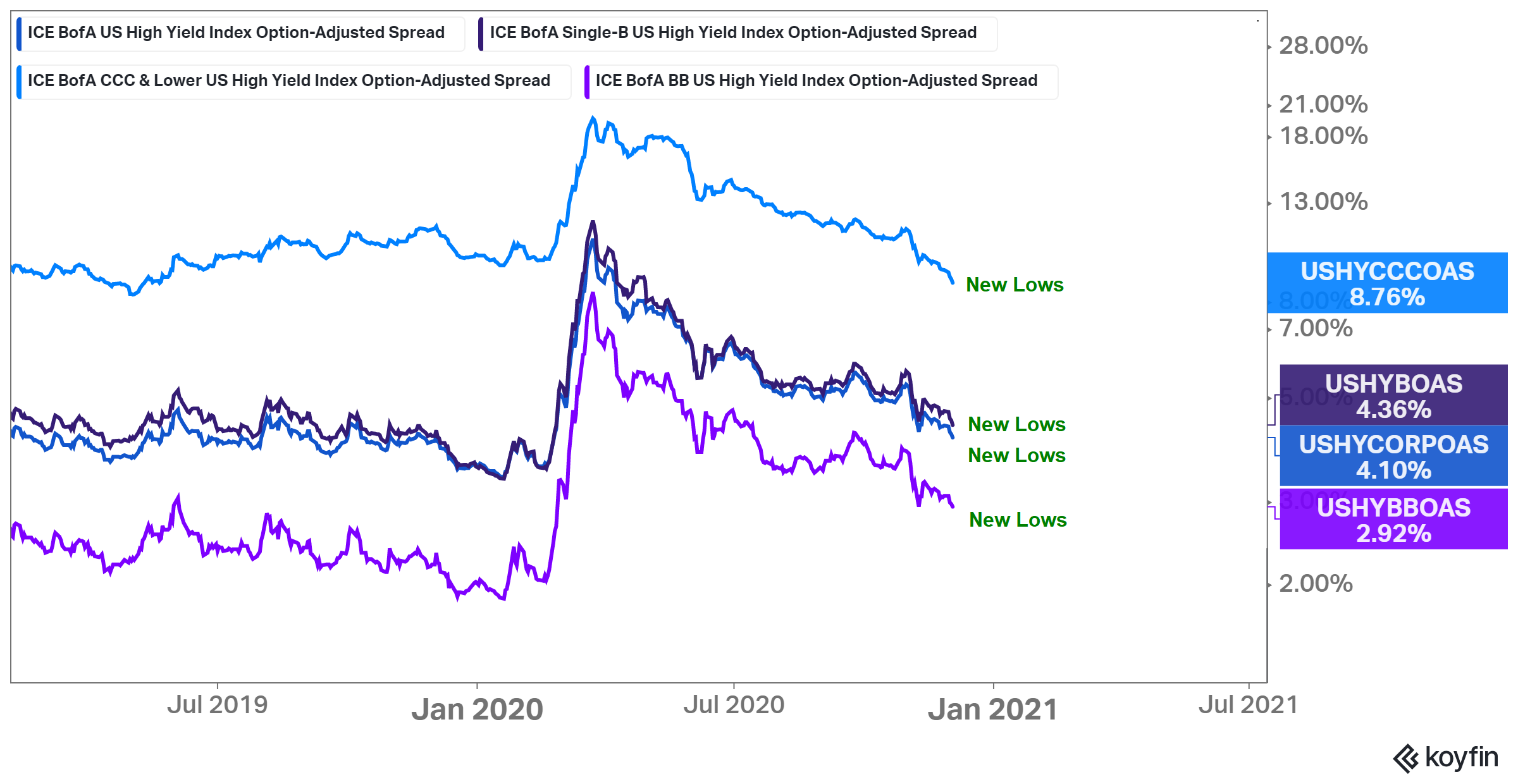 By the way, that is similar to David Rosenberg’s view that there is a bigger bubble in credit than in stocks. So we would recommend watching closed-end funds like DPG. They start going down hard before the unleveraged ETFs do & before stocks do.