This past Tuesday, on 26th January 2021, India & the Indian Diaspora celebrated India’s Republic Day, the day India formally became a Republic. The celebration is not only for that day but actually has ramifications for the entire year. And so, while slightly belated, our very best wishes to the Bhaartiya Gan-Raajya or the  Republic of India. May India’s quest for establishing its true formative, historic & future ethos, identity & stature bear substantial fruit in 2021. 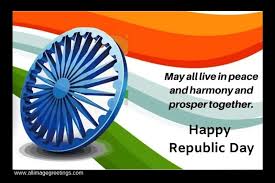 Since the beginning of time, Indian texts have begun with a Shaanti-Mantra (a Mantra for noble or celestial peace). The words in the above graphic are a subset of one of the most iconic Shaanti-Mantra of India’s formative ethos:

As we write this, the world still experiences the ravages of ill-health from CoronaVirus. In these terrible times, it is great to see that Prime Minister Modi, his Government, his Party and the entire people of India are engaged in actually implementing the message of the above Shaanti-Mantra.

India has freely & unconditionally supplied the Indian-manufactured Vaccines for CoronaVirus to poorer & less developed countries in India’s immediate neighborhood. It might well prove to be a gift of life to the poor in the Indian Subcontinent. The world has noticed and applauded.

The world must also applaud the people of India. There is no shortage of poor people in India, of people in ill-health. In fact, the majority of Indians are poor, compared to leading nations in the World. Being an electocracy, there is no shortage of politicians who make everything into a political issue. But no one in India has expressed any negative sentiments towards free shipments of made-in-India vaccines to other countries in their neighborhood & beyond. It shows today’s Indian people still believe in & practice India’s founding ethos:

This was practiced by Shri Modi not only in India’s near neighborhood but even beyond to Latin America. India airlifted 2 million doses of the made-in-India Astrazeneca vaccine to Brazil at the request of Brazil’s President Jair Bolsonaro: 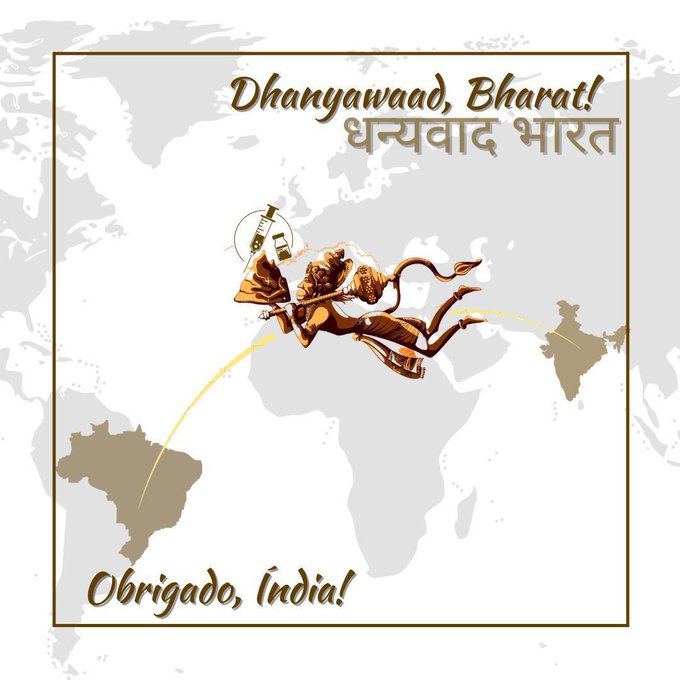 It was utterly respectful & exceedingly smart of President Bolsonaro to link his message to India’s foundational crisis & the delivery of life-saving Sanjeevani medicine from the Himalayan range to Sri Lanka. The life-saving CoronaVirus vaccine is today’s equivalent of the 6,000 old Sanjeevani medicine that was renowned for bringing back the nearly departed patients to life.

The man depicted in the image is the beloved (first & still the greatest) superhero of India, Hanu-maan (the man with a mark on his chin). Named Maaruti at birth because he was the immaculate conception of the Divine Wind Marut (मरुत), he was born in a race of tree-dwelling forest people in southeastern India. He became the true friend of Shree Ram, the Avatar of God on Earth and his people built the sea bridge to take their army to Sri Lanka to fight the evil king Raavan. During the battle, he needed to fly to the Himalayan range to bring back the Sanjeevani medicine to save the life of Lakshman, Shree Ram’s younger brother. Instead of wasting time to find the medicine, Hanu-maan sinply lifted the mountain & carried it back to Lanka. The Doctor then retrieved the Sanjeevani & treated Lakshman.

What a perfect linkage to flying CoronaVirus vaccines from India to Brazil to save the lives of the Brazilian people! Kudos to President Bolsonaro for finding the perfect way to thank the people of India.

The reality is that the defeat of the great but evil Raavan by Shree Ram and his alliance with the Vaanar, the tree-dwelling people’s army led by Hanu-maan, was a giant step towards integration of North India & South India. This 6,000 year old war remains to this day as the greatest geo-political event in India’s history and the foundational reason for its sub-continental unity.

Simply put, there is NO INDIA without Shree Ram. That is why the reconstruction of the Ram Mandir at Ayodhya has a major role in Indians regaining their mental independence from subjugation-occupation of  invaders over 1,000 years. So wasn’t it fitting to have a float celebrating the new Ram Mandir & the tale of Shree Ram in the Republic Day parade? 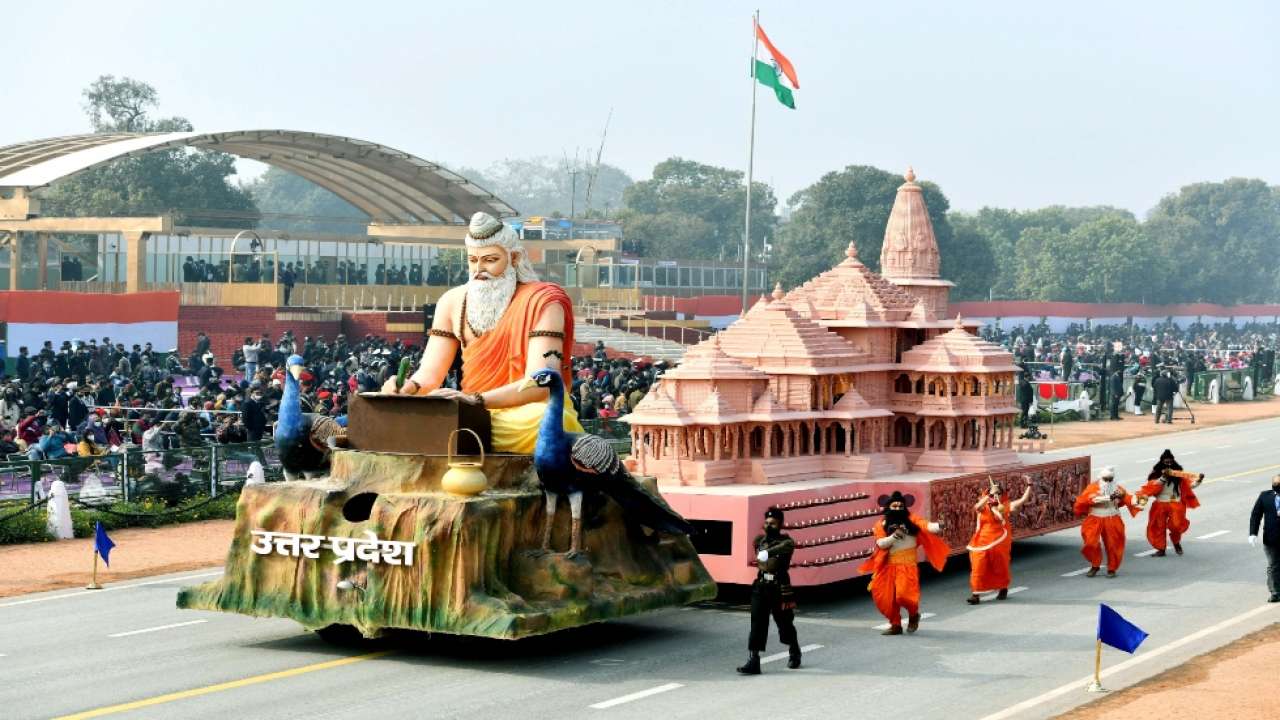 2. The Other Reality of India – Conflict & China

Look into the above story a bit more. Shree Ram travelled with his brother from Northern India over the Vindhya Mountain range that  separates South from North India. His major geo-political achievement was building friendship & an alliance with the large Vaanar people (tree-dwelling forest people) in South-Central India. The great super-hero Hanu-maan became his best friend & commander of the large Vaanar army.

South India, until then, was under the influence of the Lanka-based great but evil king Raavan. In an act of what his own advisors termed madness, Raavan committed an act that had to be responded to. So Shree Ram marched with Hanu-maan & the Vaanar army to the southern seashore; built a bridge of rocks and took his army into Sri Lanka. In a multi-day battle, Raavan’s army was destroyed & finally Raavan died in his battle with Shree Ram.

Raavan’s brother was then placed on the throne of Sri Lanka & Shree Ram returned to North India. This war & the destruction of the regime of Raavan turned out to be a huge event of geo-political significance that launched the then India.

Today Modi’s India faces a huge obstacle in his drive to make India great again. That obstacle is Chinese leadership of Xi Jin Ping. China & India together have a much easier road  towards mutual success & prosperity. But that doesn’t seem to fit into Xi’s ambitions of becoming a hegemon in Asia & Middle East. That & China’s ambitions of a land-based corridor of power through India’s Ladakh, Kashmir & Afghanistan led to China’s military adventure against India last summer.

The absence of hostility in the snow-bound winter months has neither reduced the hostility nor the prospect of military conflict post-winter. Witness two recent articles by Hu Shisheng, Director at CICIR, one of China’s most influential institutes and is directly under the Ministry of State Security (MoSS), China’s external intelligence establishment. He reportedly asserted in one of his articles that the two countries,

Another article on a PLA-maintained website on December 24 reportedly claimed,

More serious is the statement by Mr. Jaishankar, India’s Minister of External Affairs as quoted by Bloomberg:

Mr. Jaishanker is a soft-spoken man, not given to over-the-top statements. When he uses terms like “exceptional stress” and “profound repurcussions … for the entire world“, he is being extremely serious.

The end of winter may not be the only factor in China becoming more adventurous against India. The more important factor might well be the change of administration in Washington DC. Whatever you might say about Trump, both China & India knew where Trump stood.  It is not clear where the Biden Administration will stand re China-India. That lack of clarity might be viewed by China as a military opportunity.

The reality is that China cannot become a hegemon in Eurasia without subduing India and India cannot get to its historical & realistic stature without foiling China’s hegemony aspirations. That is why we termed the China-India conflict as the true Thucydides scenario of today.

If India succeeds in foiling the military ambitions of China and builds an alliance with friendly & China-fearing Asean states like Indonesia & Vietnam, it would be a major geo-political breakout for India, a true implementation of the heritage of Shree Ram.