As 2020 ends, it is important to recall and salute the Most Important Calls of 2020, calls if followed led to huge success in 2020. The first without question is the call by Bill Ackman on Monday, March 23, 2020 that he had gone long. To us that was a clarion call, perhaps because we had already noticed a turn in our own leveraged-unleveraged outperformance indicators on Thursday, March 19. Listen to that Ackman clip now to see what a fantastic call that was:

Remember how horrific the US economy seemed at that time? How could we see a sustained rally without the economy co-operating? Then, two weeks after Ackman’s call to go long, came the following tweet from the Cycle-gurus of ECRI:

This seemed laughable at that time. A couple of weeks later, Achuthan elaborated on his model of the 2020 recession and suggested that, in terms of duration, “this recession could be among the shortest on record”.

He wrote then about the 3rd D or duration of the 2020 recession:

Kudos and sincere thanks to the two AAs – Ackman & Achuthan. Without these calls, simple folks like us would have been mired in gloom in March-April.

2020 ended well. All major stock indices closed at all-time highs, except a small dip in the Russell 2000 and the microcap IWC. Treasury rates closed lower for the past two weeks. US High yield & EM Debt closed 2020 without any hiccups. And Dollar co-operated fully in this Panglossian calm.

Our friends at CNBC kept reminding us how they see smart players getting negative on the S&P 500 both physically & mentally. The action does seem to be factually true. But could CNBC folks prove wrong again true to their record? One smart observer pointed out that the only signal he saw from Volatility was a “Spike Peak” buy signal on December 21. As he, Lawrence McMillan of Option Strategist, wrote on December 31:

Going back to those smart investors going net short the S&P, we saw the below on December 30 from Nomura via The Market Ear with their accompanying chart: 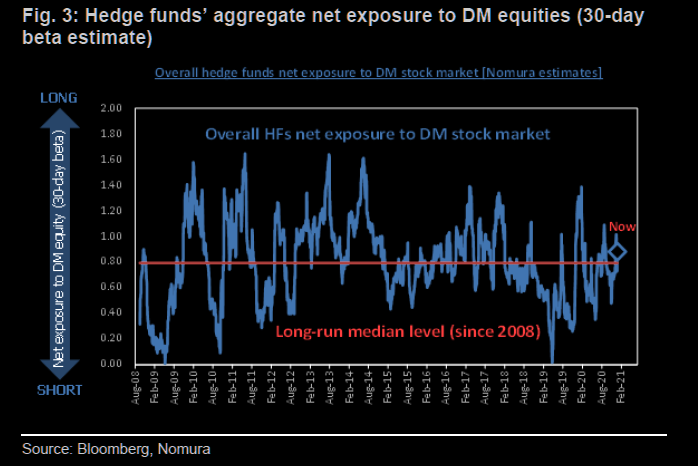 Then we saw the following semi-prognostication from Ryan Detrick:

Recall that Tom Lee expects a 10% correction in the February-April period. Could the wonderful chasers, or CTAs as they are called by many, lead a rally in January to create conditions for Tom Lee’s selloff in February? Once again, we point to what we saw from Market Ear on December 30: 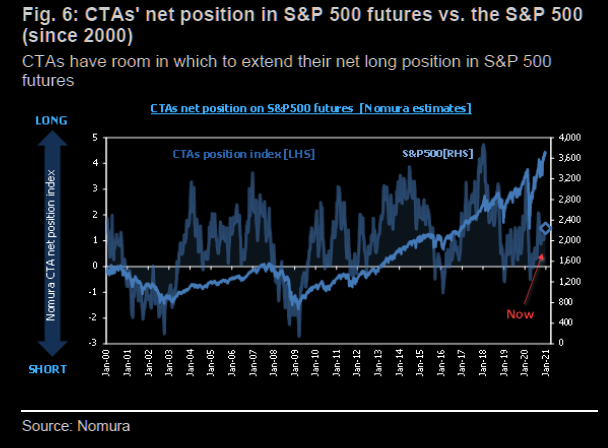 January apart, what about the comment by Ryan Detrick about “Previous times it … saw … the year higher every single time“?

No one should be surprised to hear that Fin TV is uniformly bearish on Treasuries & expects rates to shoot up in 2021. That makes sense except that Treasury rates have now fallen for two consecutive weeks from 1.696% on 30-yrs to 1.646% on Dec 31. The 10-year yield has also fallen from 94.6 to 91.6 bps. Not major declines but still suggestive of more to come at least to some: 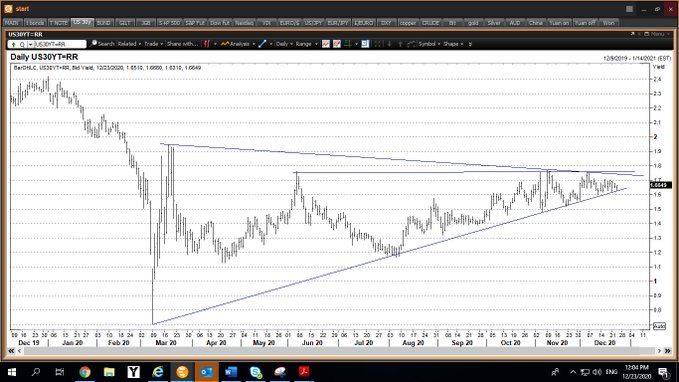 Remember Albert Edwards has been warning about Core CPI falling to zero mainly because of the rent & shelter component. Well, this week we saw the following:

What have we seen since China entered the WTO in 2002? While Service sector inflation has waxed & waned, good inflation has fallen consistently & inexorably.

We are glad that DC has finally passed the mini-stimulus that delivers $600 to needy individuals. Those $900 billion should do something to prevent a collapse in consumer spending. But it is not the $2,000 payment stimulus that President Trump was seeking. It seems clear that the Senate Republicans are back into the Fiscal Deficits concerns mode both from their core beliefs & from the need to show clear contrast with free-spending Democrats.

Regardless of what happens later this week in Georgia, the outlook for job-creation seems dim. That means we may be entering a phase of service sector disinflation or something worse if David Rosenberg proves correct. As he points out,

All this is true but we are already seeing a major change in the US economy? The tremendous surge in the shift to online has meant a multi-year surge in online commerce in America and in US companies.

But there is a flip side of that, as Steen Jakobsen of Saxo Bank, pointed out on BTV:

The real scary scenario is where both Rosenberg & Jakobsen prove right. We could get a real problem in the US economy in the next few months with core PCE going towards zero while aggressive efforts to kill the CoronaVirus end up decapacitating service-sector employment in restaurants & local merchants while focus on climate change prevents infrastructure spending in mining, agriculture & energy.

In such a scenario, we could see the Fed increasing their balance sheet to even higher levels & adding stimulus to both credit & stock markets that does nothing for industrial & commodity sector workers. We could see the Fed stimulus, because of its negative consequences on the working class, itself become a political football between AOC-regressive & core-Biden factions of the Democrat party. And Ex-President Trump himself could be a powerful voice against the McConnell Senate Republicans & closer to screw the Climate Change wings of both parties.

With all this, we could simultaneously get reduced consumer spending and high commodity & goods inflation. And what is food inflation also spikes up at that time? That might finally force Treasury rates higher, even above 2%. Wouldn’t that finally force the Fed to start raising rates at the perfectly wrong time in 2022?

On that note, our best recommendation to all is to not get arrogant into 2021 or even too sure what you know. Else you might end up feeling like what Dabo Swinney is feeling today.