Last week, we featured a couple of charts that showed almost peak positioning & almost peak risk appetite. Despite those readings, the stock market rallied strongly. The Dow was up only 59 bps, thanks mainly to huge drops in IBM and Intel. S&P 500 rallied 1.9% & Russell 2000 rallied 2.2%. Transports were actually down 69 bps. But the star on the upside was NDX which rallied 4.4% on the week led by FAANG.

Wow!! AMZN was up over 300 points by early morning Friday only to give up some and close at 3291, up 6.2% on the week. Frankly, a non-rambunctious wow, to be honest. Because the FAANG star of the week was Netflix which was 14% on the week thanks to a fantastic quarter & a promise to fund future content costs from its free cash flow. Frankly, we didn’t expect that day would come so soon.

What about the bigger “A” in FAANG? Carter Worth, resident technician at CNBC Options Action, put a buy on Apple on Friday evening saying the consolidation from September 7 was over. He even used the term “breakout” to describe what Apple would do in his opinion.

And this past week’s 10% rally in Apple came ahead of Apple’s earnings next week. Carter also said the chart of Microsoft is like Apple and Microsoft is now “fully rested” from its consolidation.

Remember our own MC/FB (Market Cap/Fed Balance sheet) indicator. So we wondered whether this rally in FAANG was in any way supported by the Fed’s Balance Sheet. Guess what we found:

If Apple, Amazon, Netflix are all so up, can Google & Facebook be far behind? They were not with GOOGL up 9.7% & FB up 9.6% this week. So now we have the megacaps all fully rested after a two-month consolidation and ready to break out!!!

That brings us to what Tom Lee said two weeks ago:

Note VIX was down 10% this week. But it still has not broken 20. And what does the Fed kill – Volatility. And FOMC is on deck for next Wednesday. And this is a Fed that is friendly to the Biden Administration, which said on Friday afternoon that “the economic crisis is deepening” and used terms like “precarious” for the economy.

So will the FOMC give a welcome present to Janet Yellen, their old friend & leader, either verbally or via increased bond buying or both? Even verbal support might send the VIX lower. Since Lawrence McMillan’s “spike peak” VIX signal is still effective, wouldn’t a fall in VIX send the S&P and especially the FAANG/NDX higher? And double especially if Apple, Microsoft, Google deliver earnings surprises?

But what if the folks that add leverage & positioning on falls in VIX are already max-in? Actually they are not max-in according to JPMorgan per The Market Ear: 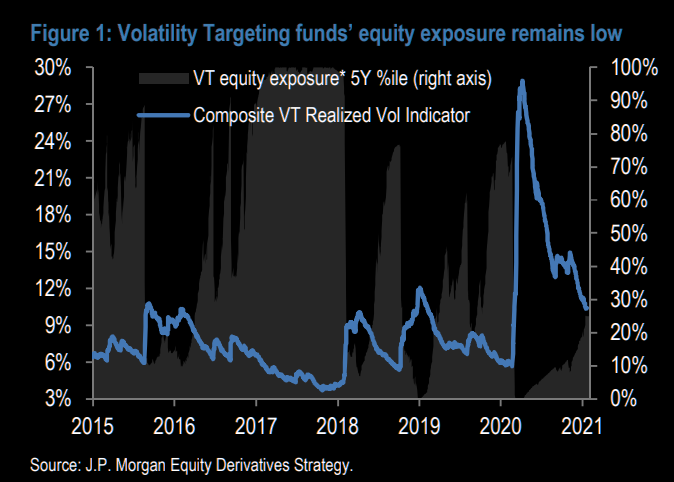 But shouldn’t Treasury Bonds behave to complete the ideal setup for FAANG/NDX to lead the S&P to a higher peak? Guess what we heard from another duo, Carley Garner & Jim Cramer* on Tuesday, January 19?

Just imagine – 1) a fall in Treasury yields; 2) Fed committing to more monetary support; 3) great earnings; 4) megacaps-FAANG fully rested after a 2-month consolidation; 5) VIX falling further leading to 6) greater leveraging in from Vol Control Funds!!! What words did Tom Lee use for the rally he forecast – Explosive?

What did Lawrence McMillan of Option Strategist write on Friday about his VIX signal?

What else does he point out & what is his positioning?

*Editor’s Note- We didn’t provide a link to the Cramer-Garner clip & instead gave a precis from our notes because CNBC appears to have “banned” even this clip of Cramer-Garner from their website. We knew that they have banned Santelli Exchange clips already. Now they have moved on to banning Cramer’s charts-based clips!. What’s the reason? We don’t have a clue.

On one hand, we see the breakout potential discussed in Section 1 above and on the other hand we see low put-call ratios, almost extreme positioning, record high sentiment etc. What does one smart guru say to that – “It’s very strange“. 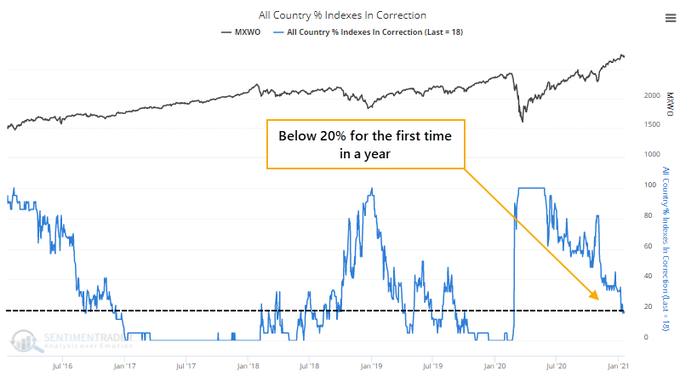 You know what is almost as strange? An Economic cycles guru using his indicators to say a double-digit equity correction is not in the cards now. Lakshman Achuthan, the business-cycle guru from ECRI, said

Achuthan used his graph above to point out that double-digit S&P corrections happen during downturns in growth cycles. He added that both the Growth Cycle and Inflation Cycle are pointing upwards and that’s why he doesn’t see a double-digit correction on the horizon.

And look what their weekly growth index did this week? 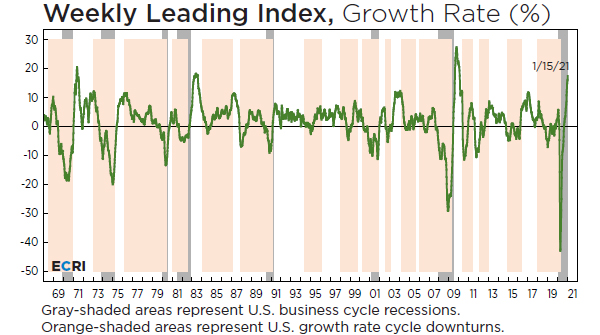 Achuthan** added near the end of his clip:

What do you think when you combine the above opinions with last week’s very bearish feedback we featured from David Rosenberg, Jeff Gundlach, Jim Bianco from the DoubleLine Roundtable? You look to the macro markets for clues. On one hand, you see 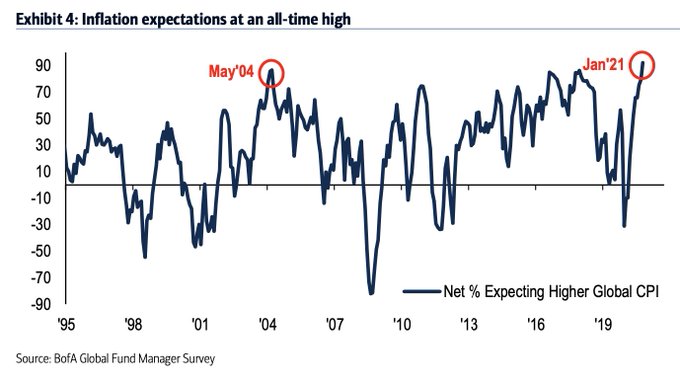 On the other hand, you also see: 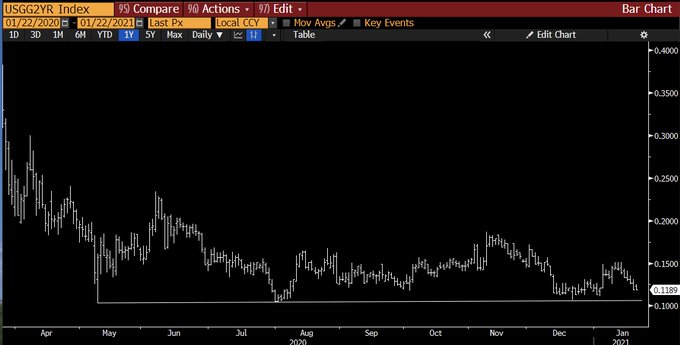 Now what? If you are like us, you agree that it’s very strange and then you turn to the Biden team.

**Editor’s PS: Sometime ago, we referred to the all-English Wilfred Frost as ironically the “most Indian” of CNBC Anchors. This week showed that was not merely in jest. Listen to CNBC’s resident “Indian”Seema Modi call Mr. Achuthan as Achumaan. This is not trivial. The term “Achut” has divine reference and “Achuthan” is a name that embodies this divine reference. That is completely destroyed by changing it “Achu-mann” that actually could be construed as a man with a sneeze. Secondly, this change in name also has an intra-Indian racial contempt. The name “Achuthan” is of South Indian origin and changing it to the “mann” suffix is typical of the racial contempt of more-fair North Indians towards darker-complexioned South Indians. This confirms what we have been saying to CNBC Media Relations people for years – that their so-called “Indian” staffers are not Indian at all and they are actually capable of creating more trouble for CNBC than the Wilfred Frost or Andrew Ross Sorkin types.

We wrote last week that,

What we saw from both a Biden team member and then from President Biden sort of added a bit of confirmation to our suspicion. The team member specifically highlighted “food insecurity” in America and even President Biden said that children cannot go hungry in America. He spoke of our “economic crisis deepening” and the need for jobs for Americans while signing an EO for $15 minimum wage for workers.

How does that sound to the most Anti-Trump economist we know?

Add to that the job losses from the closing of the oil pipeline and the continuing lockdown?

The big question to us is what the economy will look like WHEN the CoronoVirus lockdowns end & fear subsides. Until then we feel hopes of a stimulus & Fed’s increased monetary support will keep up the growth cycle. Also by then, some type of stimulus will have passed & gotten in the hands of the beneficiaries.

Then what? Will small scale businesses be able to restart, will incomes actually rise further, will consumers feel confident to spend? Based on the current Biden team proposals, we don’t think so. We think the Biden stimulus will prove to be either insufficient or wrong. The jobs picture will remain unsatisfactory to working class Americans. And, after the massive & deep economic scars from the 1-year virus mess, the future will look bleak to the majority of Americans. If so, you will see increase in “anger arising from rising expectations“. At that stage, a further stock rally could create deep anger in working class America & the Fed might become the target of this anger. If so, the Fed will again throw the ball to the fiscal side & punt.

Actually we already see a turn in people’s thinking. Bloomberg’s Tom Keene has been more fervently Anti-Trump than even David Rosenberg. But this week he began talking about his walk through mid-town Manhattan which he described as “shut”. He has also begun talking about the Democrat majority in the House resting on soft support or some words to that effect. This from a man we expected to come in every morning beaming with joy at the new all-Democrat triumvirate – Presidency, House & Senate.

If this highly prosperous & intensely Anti-Trump pair of elites is so nervous about what lies ahead, what must ordinary Americans be thinking? Our concerns are not political but intensely economic. We are truly afraid that the end of CoronaVirus may actually lead to a downturn in hope & optimism in America. Is that a recipe for increase in “animal spirits” or a spike in spending that the economic gurus are predicting? Or is that a recipe for a far worse economic inequality in America?

Our sincere hope is that the smart economist-type people in the Biden team can talk some sense into the purely political side of the Biden team and get a smart, jobs-positive, worker-positive economic stimulus passed in a bipartisan manner. And, by the way, “our sincere hope” includes a prayer that the Biden team doesn’t do anything in foreign policy this year, say something like using “human-rights” interventions in other societies. At this time, the most important human rights are right to a job, a survivable income & enough food for American workers & their families.