Wouldn’t it have been lovely & helpful to have another Andrew Ross Sorkin vs. Rick Santelli debate about last week’s youthful storming of America’s Bastille, Wall Street Power & the Fed? We don’t know what Santelli would have said but Sorkin didn’t surprise us. In a perfect replica of BrIndian inherited & assumed Brahminical* conviction of superiority, Sorkin delivered a contemptuously couched message of concern about the Redditers:

Sadly, there is nothing in common between Sergeant Phil Esterhaus of Hill Street Blues & Shaastri Andrew Ross Sorkin.

In stark contrast, we saw real anger & real understanding of what is driving the young attackers from the  most unlikely of stages – BTV’s Surveillance with Tom Keene, Jon Ferro & Lisa Abramowitz. It felt good to see & feel the real anger of the man we call Lexington Jon against the “snobbery” of the elites in considering the Redditters as misinformed, unsophisticated & dumb.

We don’t know if Shaastri Sorkin would understand it, but he should listen to Steen Jakobsen of Saxo Bank explain it on the Bloomberg Surveillance Podcast of January 28, 2021:

Steen went on to explain that Sorkin was too conceited to understand:

Look at this game of the young Von Manstein-like attackers vs. the old entrenched Siegfried line fat general defenders (WWII reference).  Actually this is an easier game for these nouveau Von Mansteiners; Why? The attackers have finite pre-calculated downside with unlimited upside while the entrenched defenders have finite upside with unlimited downside. And attackers, like the Mongols of Genghis, could concentrate their surprise attacks on whatever stock they please & when they please while the huge Hedge Fund Chinese army had to defend all their positions or all points in the Great wall at all times.

Naturally we saw a rout this week. These entrenched hedgies were helpless beached whales being ripped apart & forced to sell their good stuff, the only stuff they could find buyers for.  What was the result?

And this does go back to the intense anger that arose after the 2008-2009 financial crisis & which now found a means to impoverish the fat cats that impoverished them. To select a quote from a New York Times article:

And traditional means of legalese-based coercion are not likely to work. Look what an ex-SEC lawyer type told CNBC’s Brian Sullivan on Friday afternoon about these “true believers“, as she termed them – “ a collection of a bunch of actions is not collective action“. The SEC also feels the intensity of the wrath and will not take any steps to punish these attackers.

No wonder what we had imagined a couple of years ago is now at least possible – a coalition of left edge of Democrats & right edge of Republicans against the entrenched elite Fed-backed middle. Now we see the same anger from Ro Khanna-AOC-Jon Stewart-Ted Cruz-Donald Trump Jr.-Elan Musk-Chamath Palihaptiya against the reality:

Who are these “suits” that impoverished them? The Fed of Janet Yellen & Jay Powell. Are you now surprised why neither Treasury Secretary Yellen or Fed Chair Powell even addressed the mayhem of this week? They, like old Prince John, would rather let the arrows fall onto the fake Robin Hood now turned overnight into the Sheriff of Nottingham.

Frankly, we had no idea what we had written last week about what may come to pass after the Covid-crisis would reveal itself just a week later:

By not even addressing the issue in his Presser last Wednesday, Chairman Powell has already punted. Now  we are also getting worried about the passage of the $1.9 trillion stimulus package. This GME-triggered crisis may take all the oxygen from that effort. Already, as Jim Bianco said in Part 3 of the DoubleLine Roundtable – “20% of American’s income comes from US Government sending checks or via direct deposits into your accounts“.

And the future all the way to 2030 looks bleak for employment per Steen Jakobsen:

The reality is that the Redditter crowd understands that what was done in the name of reviving the US economy from 2008-2009 onwards was a complete failure & the main reason behind the enormous inequality in America. And now they see the same Yellen-Powell team trying to do the same again. Double And they increasingly see that Social Media & Wall Street Big Money are simply two sides of the same coin.

If this is really what they feel, then we might be in for a hot summer.  But before the summer, comes next week:

**Editor’s PS – the Brahminical reference should not be construed as anti-Braahman. The spelling “Brahmin” is a BrIndian spelling,  a dog-like slavish devotion to British-left nomenclature despite the inherent insult. In this context, we reserve the “Brahmin” for those who only claim a hereditary Shaastri status without even the barest knowledge of Sanskrut or even the most basic understanding of Sanskrut texts. It is also used to highlight the huge chasm between these BrIndian Brahmins & the real “Braahman” who have fought against the equality of all professions regardless of birth in elite or non-elite classes.

We can now laugh at our summary of last week which was predicated on the possibility of VIX breaking 20 on the downside. The VIX broke the 20s for sure but to the upside led by, per Steen Jakobsen, “the single biggest [one-day] percentage move in the VIX on Wednesday“. Frankly, to us, the action in VIX in the last hour on Friday was concerning and the S&P did break Wednesday’s low in that hour.

All the major stock indices closed down more than 3% on the week. The transports fell twice as heard , down 6%. EM indices fell harder than the US indices and US banks were torched. The real signal of de-grossing was that Treasuries hardly budged with TLT only up 28 bps despite both stock indices and material stocks being thrown out (FCX down 12%).

While this looks ugly, how much de-grossing is left?

The de-grossing shown above was after a 20%+ selloff in 2020; now we have reached the same de-grossing level after a mere 3.5% drop? Does that mean de-grossing needs to go further or that it has come down too far & too fast?

The Dow Futures were down another 680 points late Friday. So we have no clue what is going to happen on Monday. The action between 3-4 pm on Friday showed the plunge protection team was staying away with the Fed. Perhaps they need a really bad Monday to wake them back or they might be hoping RobinHood restrictions on buying 40 stocks might take down the fever.

But what then? Such an extreme de-grossing should almost by definition lead to some level of re-grossing, right? On the other hand, it might take another stampede down to shake out everybody. Our own view is that this is not the big fall. It seems too much like a flash crash driven by one event. So at some point, we might bet a rally to recover the lost ground. If that rally doesn’t get to new highs, then we might get a bad February. 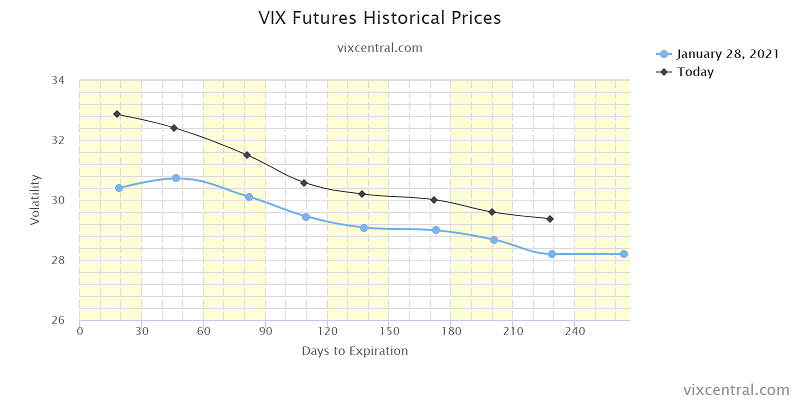 Is the above the stuff that makes for real bottoms? Or do we need to get to March 19, 2020 type VIX curve to match the March 2020 level of de-grossing? 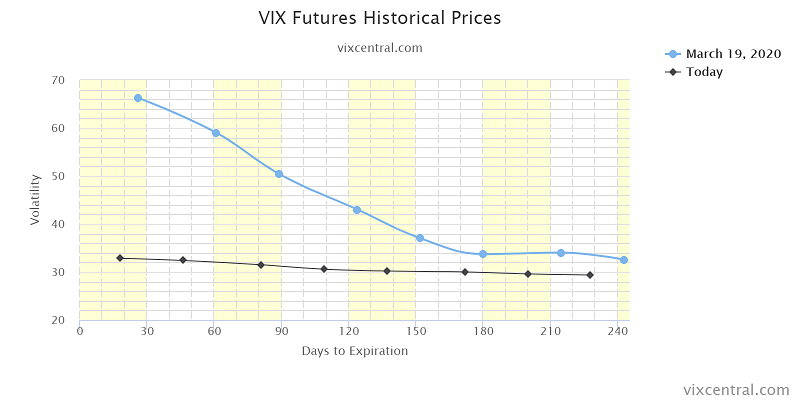 Look what Tom McClellan said in his article VIX Analog Shows Pop Was On Schedule:

We urge all to watch this clip. Besides ideas, the exchange about the economy and inflation is very helpful:

Ed Hyman was simple & clear – I am bullish on real estate, cash & tech stocks. Regarding the comparison with the Roaring 20s, he said Roaring 20s were about one thing – you had zero inflation for a decade; what made that decade was technology – electricity, automobiles, radio. Speaking about inflation prospects ahead of us, he said as a practical point if we get inflation we will see it coming; Oil prices will get to $100; bond yields will rise above 2%; and the Fed will stay on hold for awhile; so I will have 6 months or so to watch before I react to it;

David Rosenberg presented four themes for investing around “scarcity” theme. He said invest in what is scarce not around what is abundant:

Rosenberg scoffed at the idea of inflation saying we need to have 3 years of 4% GDP growth to get inflation which we are not going to get.

Jim Bianco went directly against Rosenberg & recommended shorts against 10-year Treasury or buying TBT. He also dislikes banks because he thinks they are going to turn into utilities with new companies like Market Access TradeWeb MSCI, S&P Global taking away their profitable businesses.

But one thing seems to remain constant – continued success of big tech behemoths like Amazon which Carter Worth of CNBC Options Action recommended buying on Friday.