It was like Gamestop all over again, wasn’t it? Wasn’t it whirlwind fast & furious? They were able to do it then because every one was on one side of that boat. It was an attack on large entrenched positions deemed safe. The stampede out of those safe shorts is what caused that entire 6 standard deviation (borrowing a term from Larry McDonald) move.

This week’s 6 standard deviation move resulted from the same condition of everyone being on one side of the boat, the 5-year side of the Treasury curve or, more broadly the 3-7 year part of the curve. Remember how FinTV kept crowing about the steepening yield curve. A favorite stock guest of CNBC actually expressed satisfaction on Thursday’s Closing Bell, yes on Thursday afternoon, that rates were going up for the right reasons. What an idiot? The 5-7 year yield rising 18 bps in one day because of “right reasons”?

But there is more here than meets the superficial eye. Look what you see when you compare & contrast the net moves in Treasury yields on Thursday & Friday:

In contrast, yields in 5-7 year sector rose the most on Thursday & fell the least on Friday. And the 5-year is the most sensitive yield to near-term Fed moves. Last week, we quoted Bob Michele of JPM Fixed Income saying on Bloomberg Real Yield that “Powell/Clarida/Brainard will try to stop this rise in long duration Treasury rates“. Not only did the Fed Brain Trust failed to stop long duration rates from rising but they created a massive stampede out of the belly of the curve – 5-7 year sector.

And, just like Gamestop shorts, the positioning was massive in the 5-year Treasury. It was deemed as the safest with 40 bps+ yield. Instead of reassuring them this week, Fed Chairman Powell scared them in his “cavalier” manner. That created a stampede out of that corral and it broke the deepest & largest bond market in the world. Just like the Treasury storm launched by Chairman Powell in December 2018? Guess no one can scare them like good old Jay! 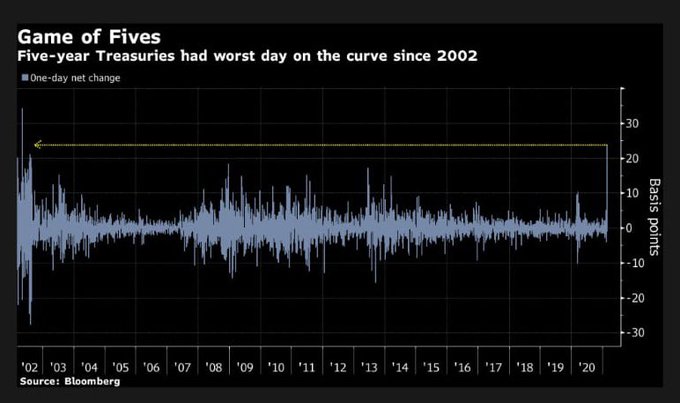 BlackRock’s Rick Rieder was pretty sanguine about the destruction in Treasuries. He said he had sold most of his Treasury & Agency positions. He also wrote an article on Friday that keeping loads of cash & refusing to invest in short duration Treasuries that pay zlich was like using the “Queen’s Gambit Declined” move in Chess. True that!

We wish CNBC’s Scott Wapner had reminded Mr. Rieder about his oft-repeated view that being able to finance at 40-50 bps (raised in about 5-year maturity) was like injecting enterprise value in to companies. But how can companies finance at 40-50 bps now when the 5-year Treasury rate is 75-80 bps? So by his own argument, this 2-day move has already exposed companies to higher financing rates and that is assuming credit markets don’t get infected by this Treasury contagion.

This storm is entirely due to Fed’s appallingly “tone-deaf” (term borrowed from BTV’s Lexington Jon) remarks this week. This 5-year Treasury stampede happened because the Treasury market couldn’t figure out how the Fed can manage or, scarily, whether the Fed will even be able to manage the relentless move in real yields ( from minus 100 bps to minus 60 bps in last 2 weeks).

The Gamestop attack was stopped by the SEC & Robinhood by banning new long positions in Gamestop. As Priya Misra said on Bloomberg Real Yield on Friday – “the Fed needs to step in or its going to get worse” especially with the 10-year auction coming in just over a week.

Forget “in over a week”. Look what ISI was quoted as saying on Friday:

Mark Cabana of BAML said on Bloomberg Real Yield at about 1:20 pm that

Now look what happened to TLT, the Treasury ETF, during the last hour of trading on Friday:

Was that furious short-covering ahead of the weekend or did some get a signal about a Fed comment on Monday, or even Sunday before Asia opens?

Now look at the above maturity-wise breakdown of yield action on Thursday & Friday and notice that the 30-5 year curve FLATTENED by 23 bps in the last 2 days. Yes, flattened, not steepened. So any surprise that the reflation trades in equities closed down horribly on Friday? 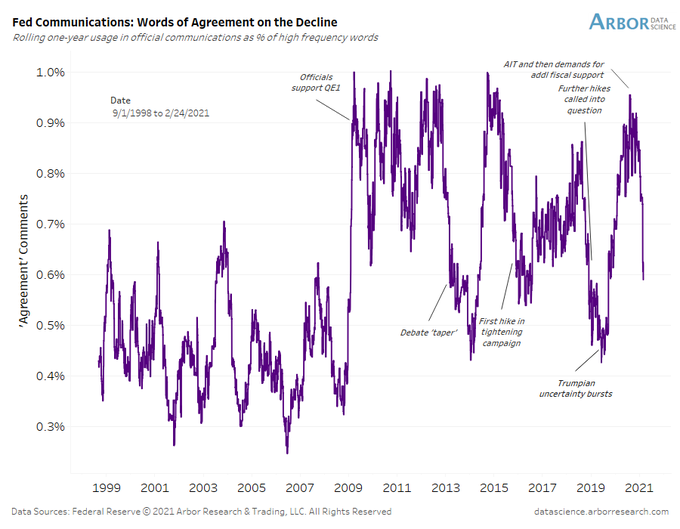 Now ask yourselves what if Fed-heads Williams, Meister & Bostic say something on Monday that confirms this intra-FOMC disagreement?

We know the Fed can’t do much for the long-end of the Treasury curve. But they may not have to given what you see below: 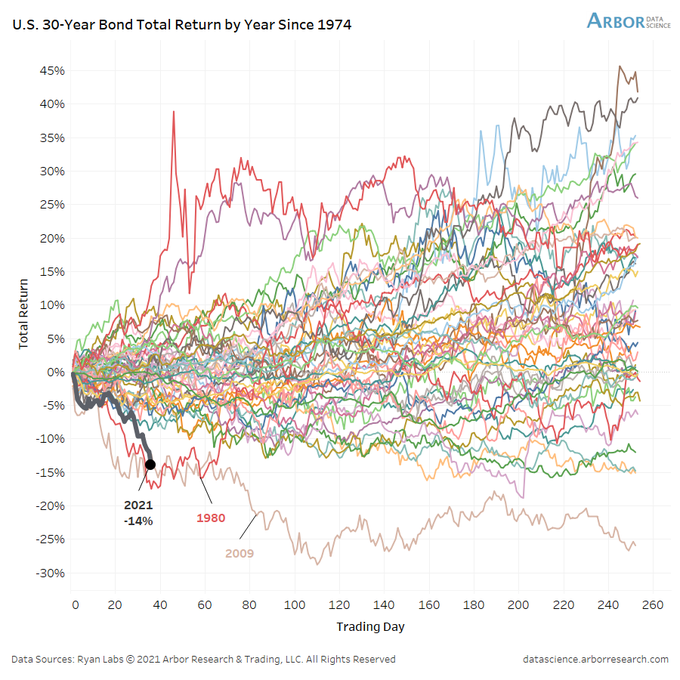 What about global bonds in general? 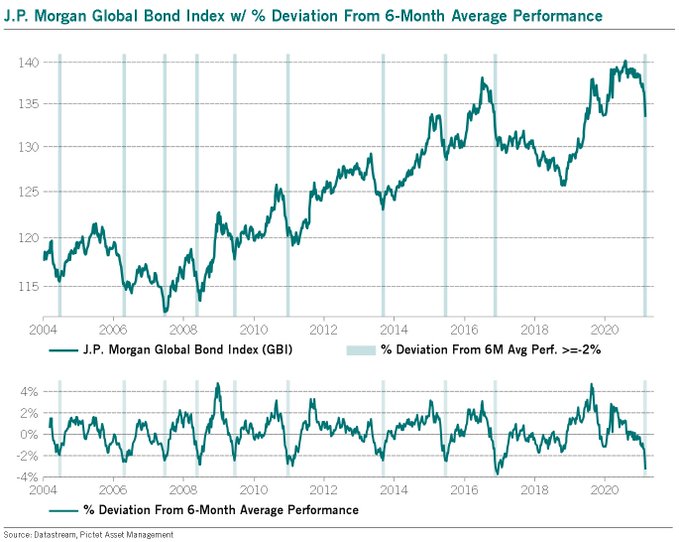 What about Relative Strength or lack thereof? 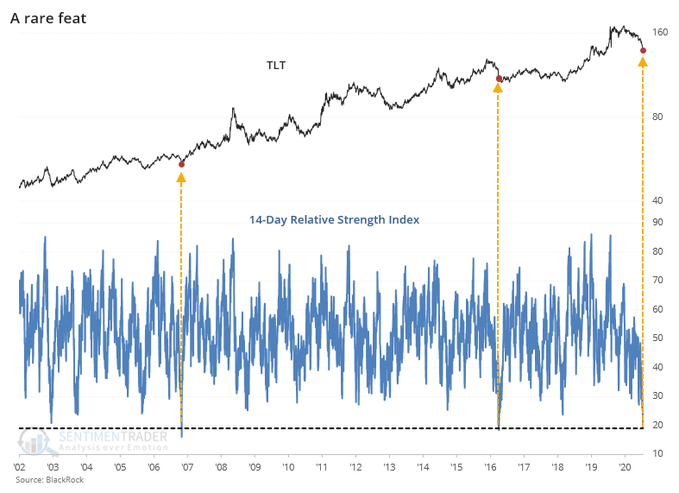 What is TLT rallies from here? What stock sectors might benefit the most? 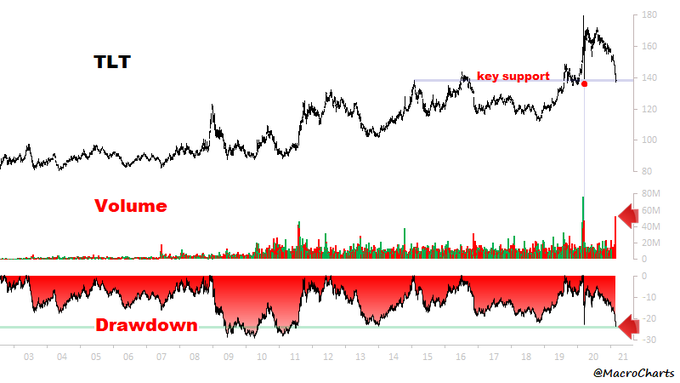 That brings us to stocks.

US Stocks have behaved relatively well in this breakdown in the Treasury market. The VIX did rally 35% on Thursday but only to 28.9. In contrast, VIX exploded up 61.6% to 37.21 on the first Gamestop de-grossing day on Wednesday January 27. But that was a 1-day peak which led to McMillan’s VIX spike buy signal. What if Thursday 35% VIX move to 28.29 also proves to be a peak?

Did Lawrence McMillan say anything about that on Friday?

JPM’s Marko Kolanovic said early this week that VIX is in a bubble and if it falls, we would see a rally. He is not the only one who argues the VIX trades way above where it should: 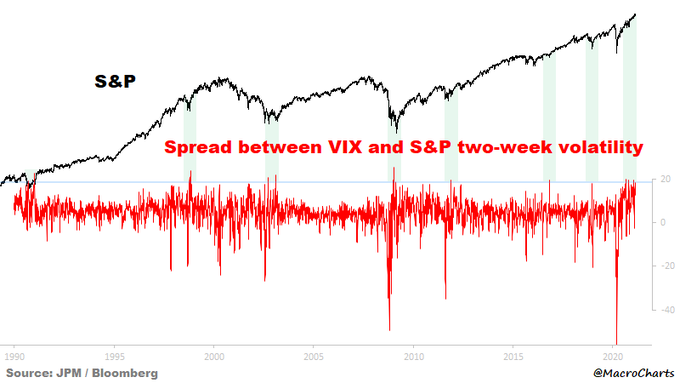 The primary focus early next week will be on the Treasury market & especially on the belly of the curve. But next week’s data will be also be important. If the data is less strong than expected, then the Treasury complex may cool down & the VIX may follow. Extreme events like the 6-sigma stampede from the belly of the Treasury curve usually do settle down in the next few days and that process might begin next week. 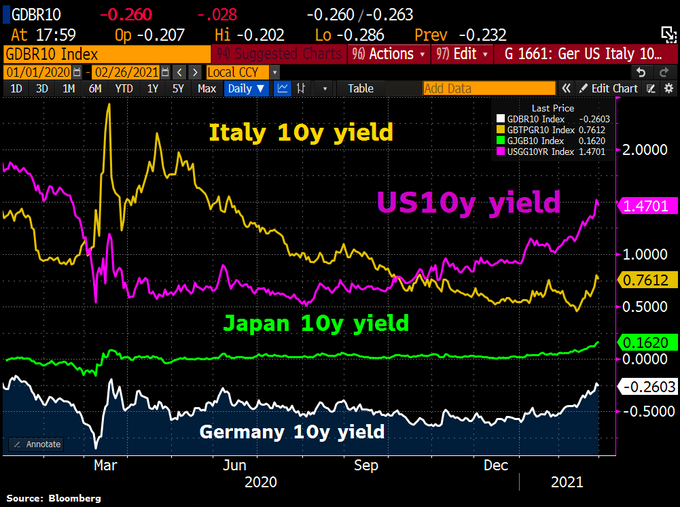 Is there one word for this? 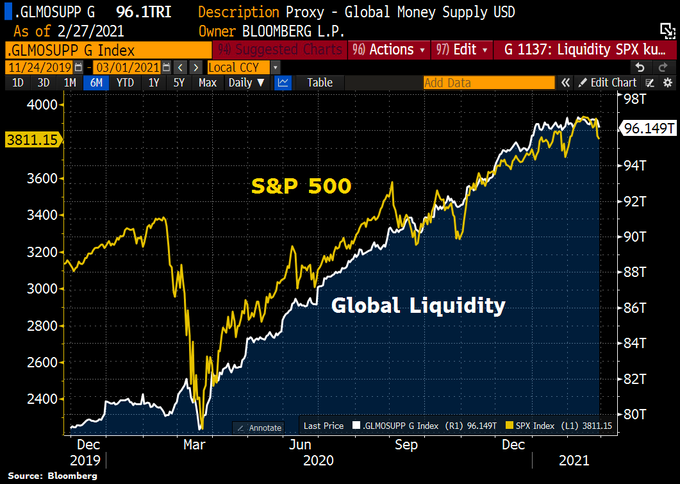 The US Dollar went up because of fear in the Treasury market. Nothing causes illiquidity & risk aversion  like fear. And who is the only player that can reduce this fear? You can call him Jay! How will you see if he is being successful? Treasury selloff reverses & VIX falls. Now that is a consummation devoutly to be wished!