As we said last week, “Guess no one can scare them like good old Jay!“. You think he would have learned from the week before. 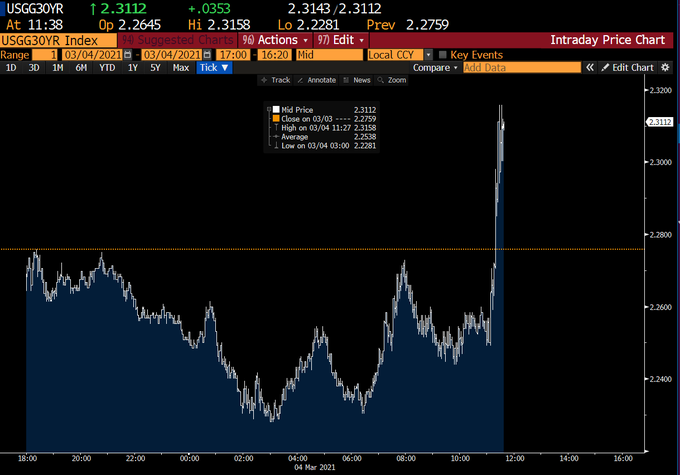 That might be par for the course for Jay:

The trouble is that Jay doesn’t fold in just a week or two, as the above cases show. Recall he began his scare- the-markets campaign in October 2018 & kept going until he finally set the proverbial house on fire in the December 2018 FOMC meeting. Then he capitulated & sealed his capitulation in the first week of 2019.

But reversing that stubborn stupidity was both easy & healthy. It was the right thing to do. In contrast, he has a bigger problem now. He really cannot go to Yield Curve Control (YCC) until the 10-year Treasury rate gets much higher. Else he will torch the Dollar and create a bigger problem. What he needed on Thursday was to channel his inner Greenspan and speak in a lingo that no one could decipher clearly.

On the positive side, Friday showed that there is a limit to puking, even puking Treasuries & Nasdaq stocks. That is why, despite a 379K jobs report (vs. 200K expected), the 30-yr rate settled down in the afternoon to close down on the day & TLT closed up a bit on Friday.

Is there a “Tums” available to prevent puking next week? The most effective one might be silence from Chairman Powell & his merry band of talkers until the FOMC meeting the following week. There is another hurdle though – 10-yr Treasury auction on Wednesday & the 30-yr Treasury auction on Thursday.  If those go through without too much damage, then rates might stabilize next week.

What might that mean for TLT? Carter Worth of CNBC Options Action, in response to a viewer question on Friday, said TLT could bounce to 150. His rationale?

Perhaps the best news for both rates & stocks was the action in VIX on Friday after the Thursday. From its peak around 32 at 1:00 pm on Thursday, it felt off its Friday cliff from 30 to 24.67:

What did Lawrence McMillan write about this action in VIX?

The Nasdaq 100 (QQQ) chart below from CNBC’s Mike Santoli is so perfect: 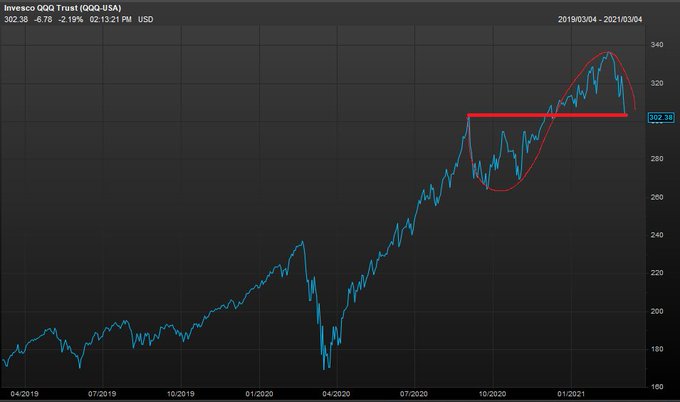 Larry McDonald (@convertbond) put numbers on the otherwise perfect symmetry above – $12 trillion market value lost & dead money for 6 Months. But another chart may suggest some life: 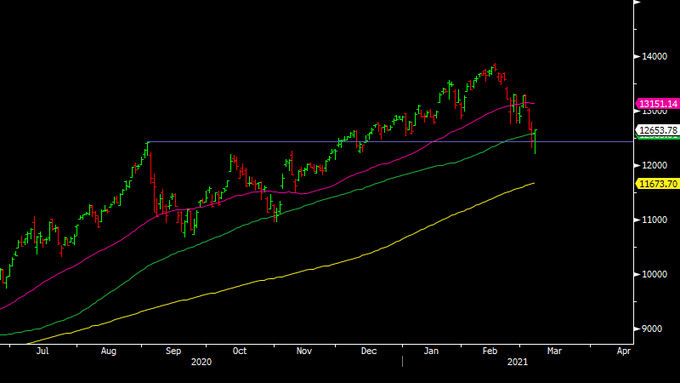 The Market Ear posted another QQQ chart with the heading – “NASDAQ, the biggest casualty post the rates panic, is down to some big “must hold” levels.  … Futures are below the 100 day moving average, which is not great, but we have seen the index trade below it and snap back before.” 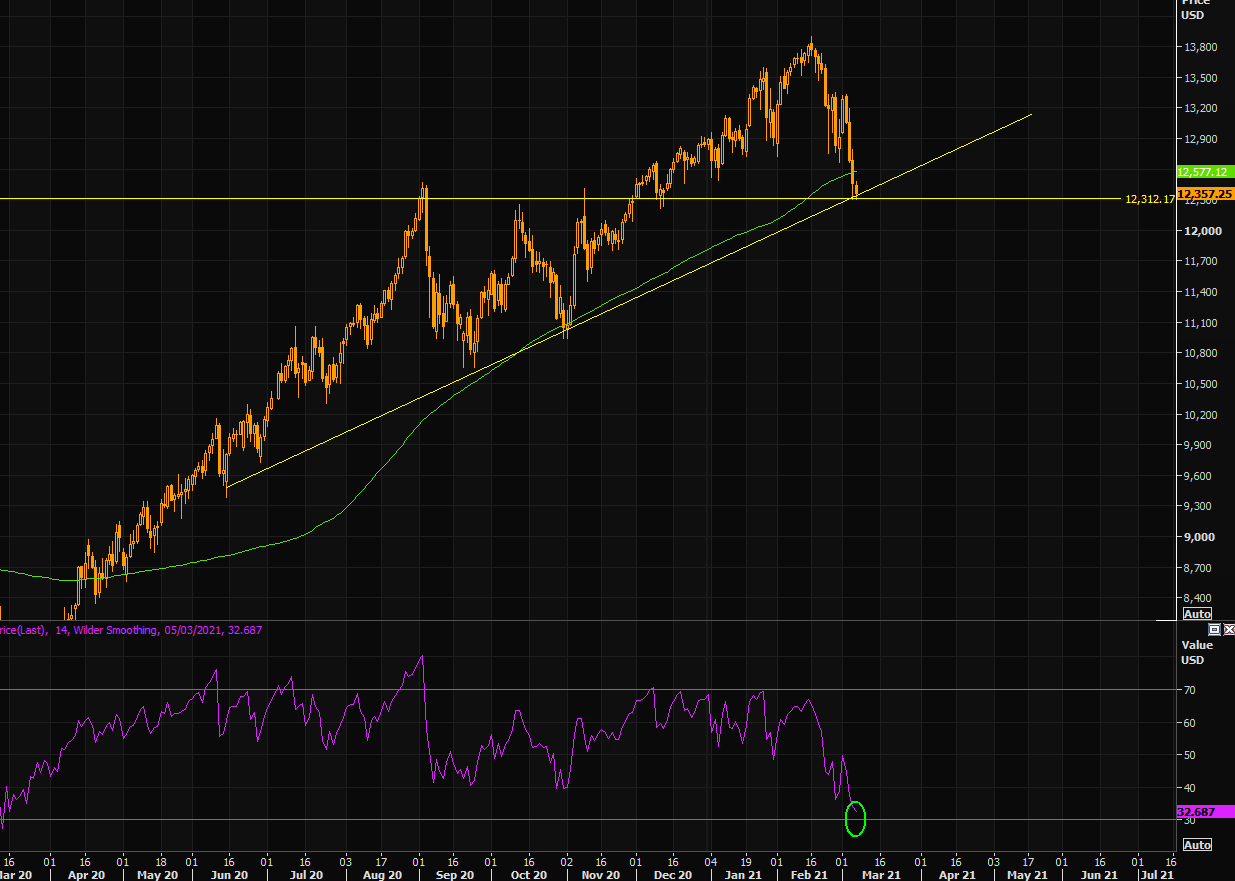 The above were posted after the fact on Friday. Did any one have the courage to tweet positively about momentum stocks on Thursday evening?

Tom McClellan had flipped from short to long on Thursday of the week before as he said on this past Tuesday, March 2:

Veteran Tech investor Dan Niles came on after the close on Thursday, March 4, and said that they “covered 70% of their tech shorts on Thursday” and pointed out GOOGL & Facebook are reasonably priced growth stocks with “a lot of runway ahead of them“. He added they will start deploying “cash over the next day or two“.

If rates have stabilized enough to spark a serious NDX rally, then perhaps some over-done trends might be on the verge of reversing? 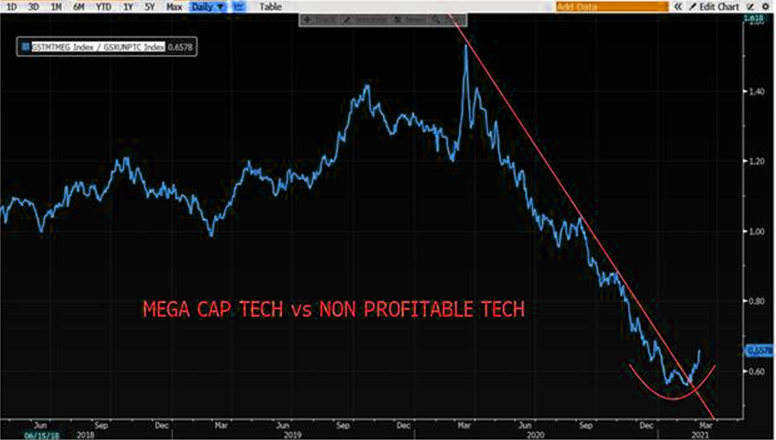 In this vein, Carter Worth pointed out on Thursday evening that the top 5 stocks (Apple, Amazon, Facebook, Google, Microsoft) as a basket were only down 0.17%, meaning “they held up very will in a tech rout“. He also pointed out that the relative performance of NDX to the Nasdaq composite had bounced off the long term trend line which was bullish.

In the above vein, is another broader turn also taking place? 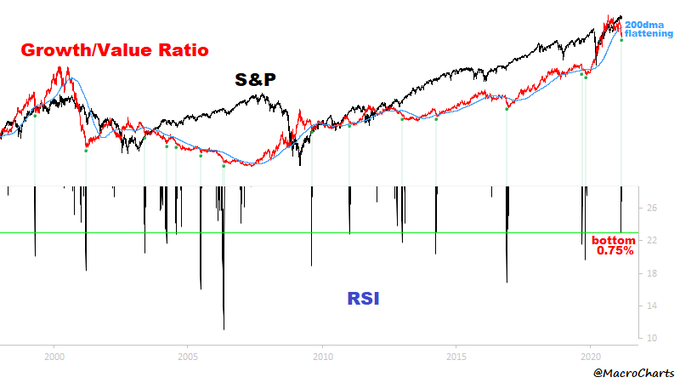 Meaning if the growth over value bounce is only a dead cat bounce that stops at the 200-day moving average, then this is a period like 2000-2006, a period in which rates went up, commodity stocks went up etc. That is the view Dan Niles expressed on Thursday saying the tech rally he expects will be a “one more surge higher” and then rates will move higher with the “10-year going to at least 2% by late this year“.  He added that the “reflation trade … like energy, like banks they have a long way to run“.

The reflation trade & the resultant 2% on the 10-year yield are now accepted consensus because of the stimulus-driven 6%-7% print in US GDP later this year. Priya Misra of TD Securities raised her 10-year rate forecast to 2% on Friday morning, mainly because of Chairman Powell’s speech on Thursday as she said on BTV.

But some smart fixed income managers are openly saying that the impact of the stimulus will be short-lived and then the old factors of demographics, high debt load etc. will again reassert their impact. Scott Minerd of Guggenheim came forward with an extreme forecast of negative yields based on his model. A more prosaic & perhaps more realistic forecast came from Robert Tipp, head of global bonds at PGIM, in a Bloomberg article.

We know how shorts have piled on the Dollar: 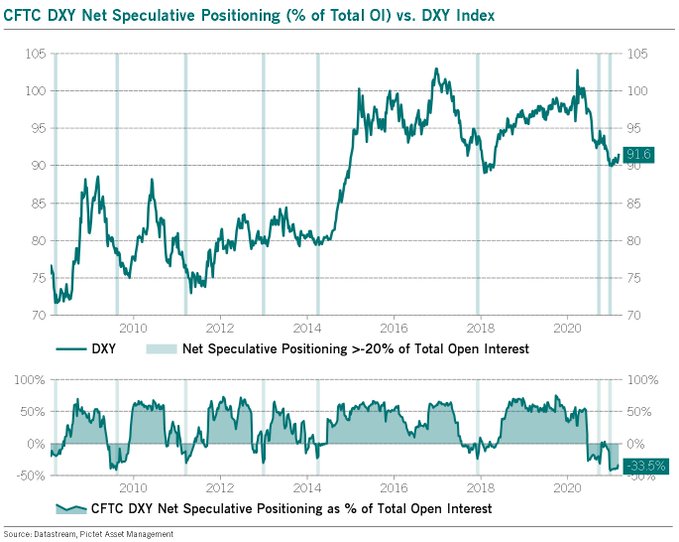 Notice that the Dollar was up 1% this week and the Dollar was the one entity that did not reverse from Thursday to Friday as VIX, Rates & Stocks did:

Is that setting up the following? 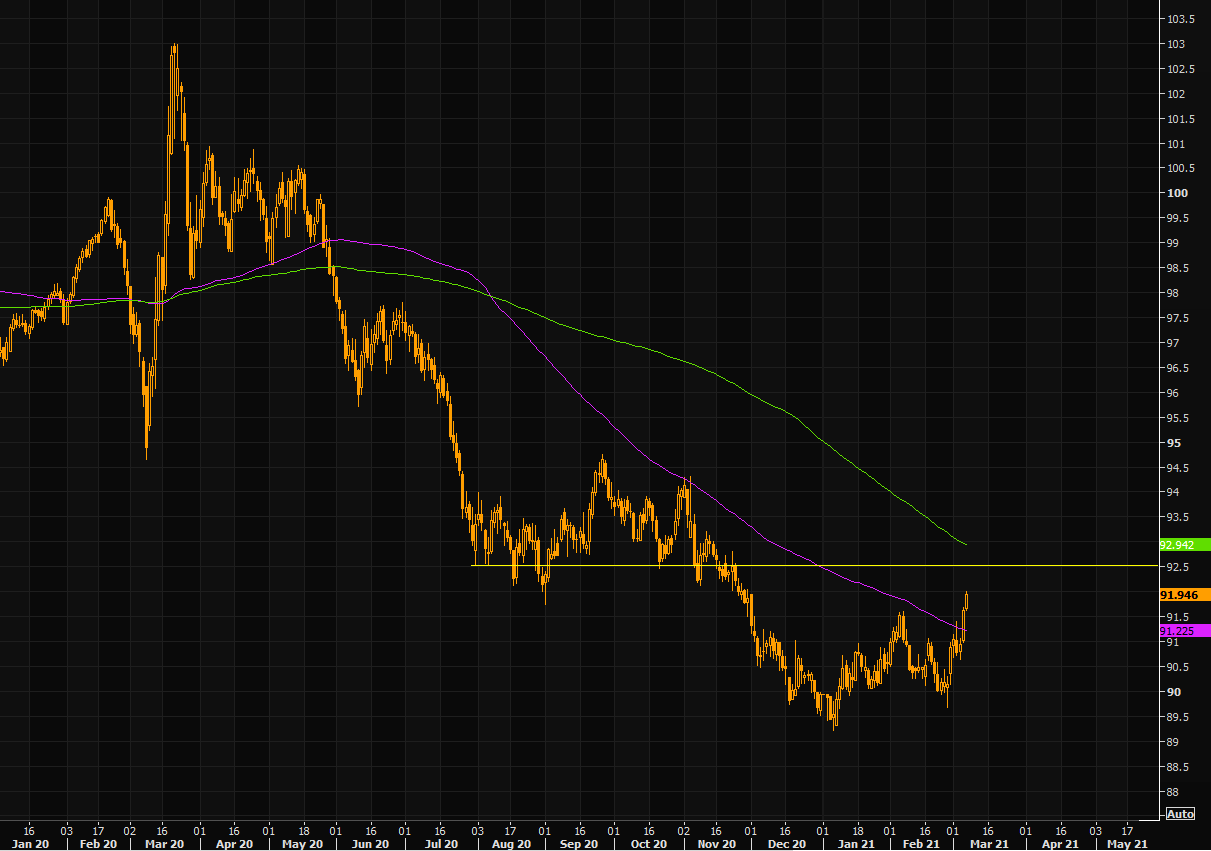 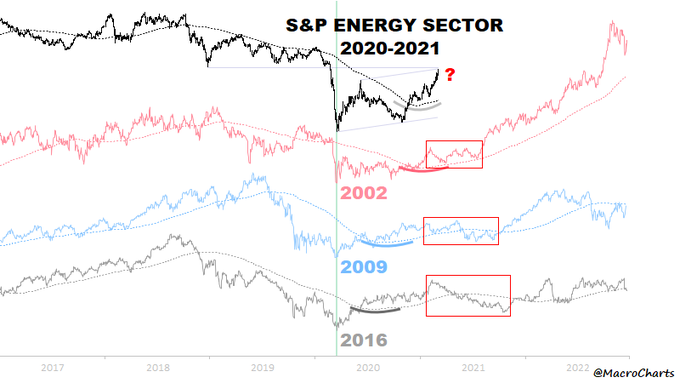 In contrast, Tom McClellan said this week, based on the signals from the action in Gold, that “there are many many more months of rise for oil to come, for grain prices & for interest rates for that matter”.

Speaking of big turns & trend reversals, Saturday March 6 2021 is the 50-year anniversary of a momentous turn. Indians have not been winners since they became termed as “Hindus”, a trait that continued even after the British left India. India has produced scintillating cricket players but the Indian team was never a winner in our early childhood. Then a 21-year old young man was selected to the Indian Team in their foray into the mighty, mighty West Indies. 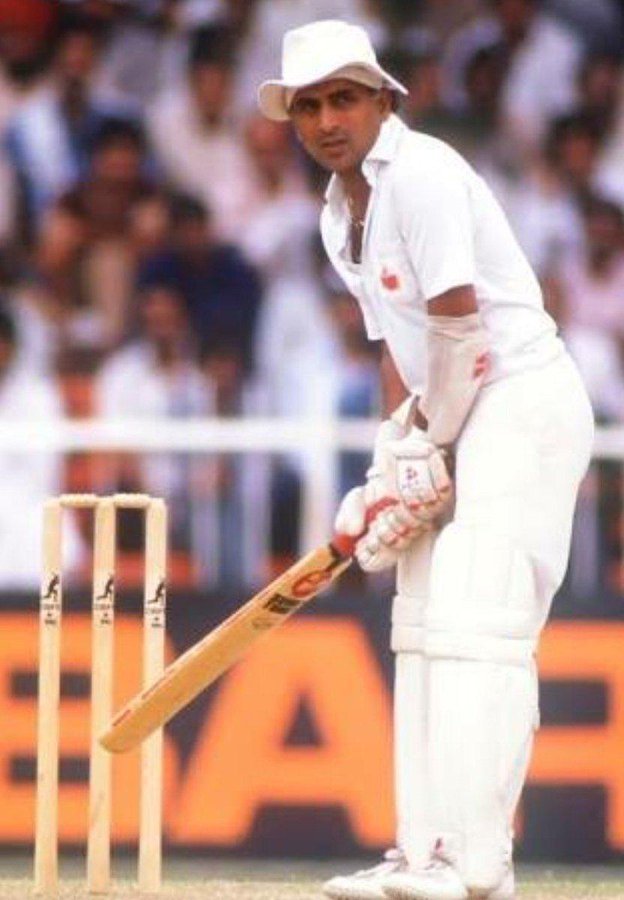 See! While Amit Paranjape praises Gavaskar’s positives, he missed the most important of Gavaskar’s attributes, the attribute that was far greater and far more unique than others. That attribute was lauded by the all-time iconic Gary Sobers, the captain of the 1971 West Indies team. Sobers called Gavaskar the GOAT of all cricket players & said Gavaskar was so special because “he just hated to lose“. Gavaskar was a winner, in contrast to Hindus who still prefer to be gracious losers just as the British taught them to be.

Sobers knows because his team handled the rest of the Indian batting easily but just could not get Gavaskar out. The result was the first ever series win by India over the great West Indies in their home ground. In fact, the West Indies produced a calypso in Gavaskar’s honor with the theme: