Last week, we featured a Tom DeMark (via Cramer) call for a trend exhaustion signal at 4139 on the S&P and 33959 on the Dow. Both were left behind this week with S&P closing at 4185 & Dow closing at 34201. So was DeMark wrong or is a correction ahead at higher levels?

That reminds us of what a fervent bull had said a couple of weeks ago. When speaking of a “face-ripper” rally, Tom Lee had said that the S&P could to to 4,200 in April and then stall there for some time. Well, 4,200 is only 15 handles away or just a day’s work.

Then we saw one of the more bullish commentators warn of a parallel move & a reminder of what we might see shortly ahead if his parallel holds true:

This week another well-known strategist, Tony Dwyer of Canaccord, went neutral to a bit bearish on the stock market & said it is “time to take some profits“.

Describing his view as “a perma-bull pulls in the horns a little bit“, Dwyer gave 4 reasons for his step-back:

Speaking of the Fed talking hawkish, we must point out that 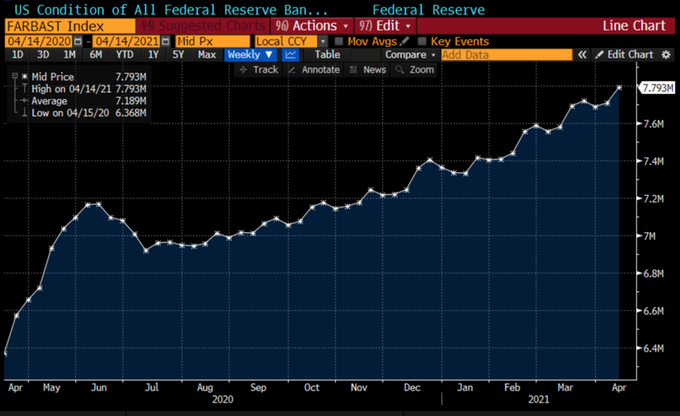 Look at the above chart & then look at below. The divergence might explain how derivatives can spoil the mood:

Remember Tom Lee talking about VIX going towards 15 as a reason for his to feel bullish? And recall that VIX “spike peak” of Lawrence McMillan was something we pointed out during the small S&P down moves this year.

Well, VIX 16 is nearly here with VIX closing at 16.25 on Friday. And now, according to the below, some “smart quants” are suggesting shorting it: 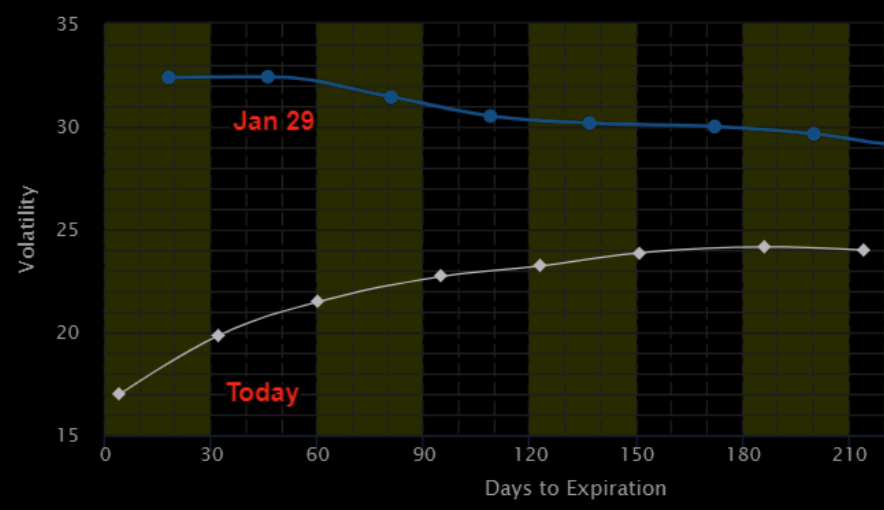 Isn’t that hate another side of the “perfect panic”? 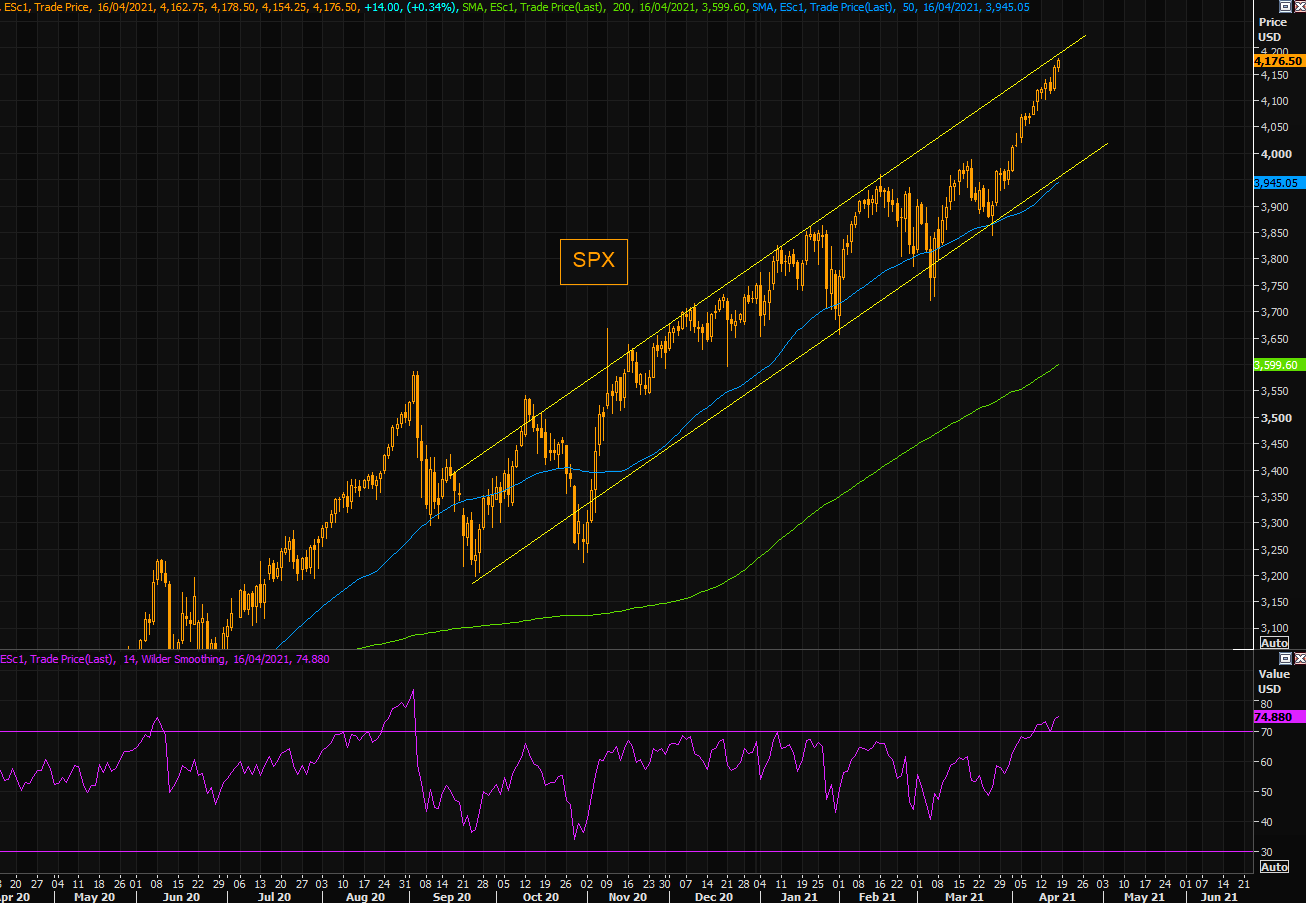 Going back to Tom DeMark, recall from last week that he said, via Cramer, that QQQ should move higher even if S&P and Dow reach their trend exhaustion. And this week QQQ did get to a new all-time high. So is there time to worry about the QQQ “uptrend faltering“? That is what Tom McClellan said this week in his article NDX Stocks Above 100MA:

But didn’t DeMark say that the up move of QQQ while S&P and Dow stall was dependent on Treasury yields falling? That brings us to:

Look what happened this week. While everyone was focused on S&P, Dow & QQQ reaching all-time highs, Treasury zero-coupon bonds outperformed all of them and even TLT matched the return of the Dow. Now if the S&P is about to falter & Treasury yields maintain their downward trajectory, then clearly the bonds will outperform. But for a short while, right? Not so argue some: 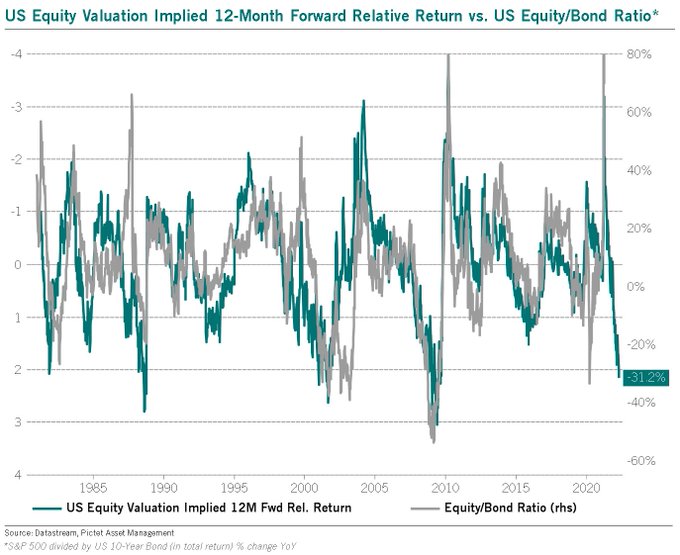 Do not forget that the 30-yr bond return in Q1 2021 was one of the worst in 2 decades. So the upside returns from bonds could surprise many. 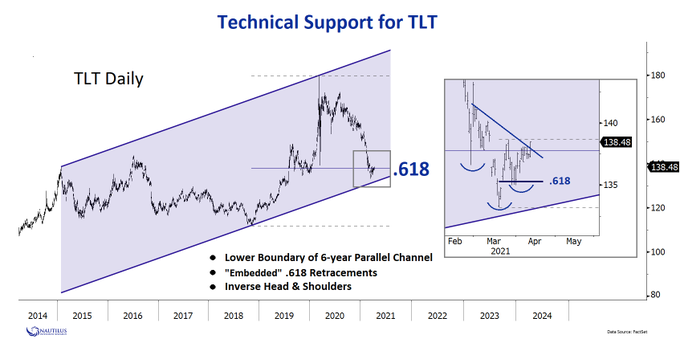 Yields fell hard across the curve with 30-yr & 20-yr yields down 6 bps and the 10-yr yield down 7.5 bps to close at 1.59%. TLT closed at 139+ already achieving the midpoint of the channel that Carter Worth had predicted last week. But is that it? Not so tweeted Carter Worth on Thursday, April 15: 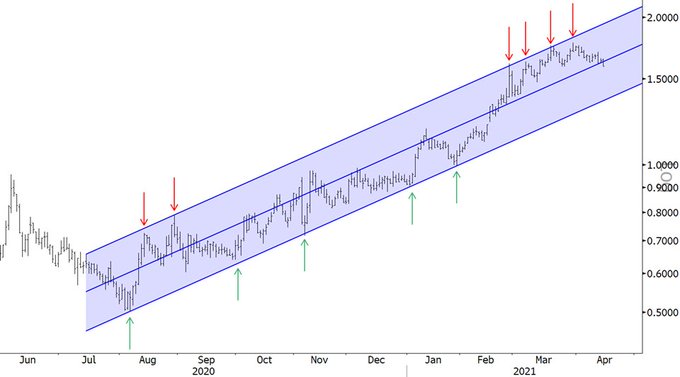 But that day, April 15, was really a big deal. The Retail Sales numbers were stunning and so was the fall in Jobless Claims. Then, instead of shooting up, Treasury rates began falling & almost collapsed. Then they rallied back in the afternoon to recover some of the fall. 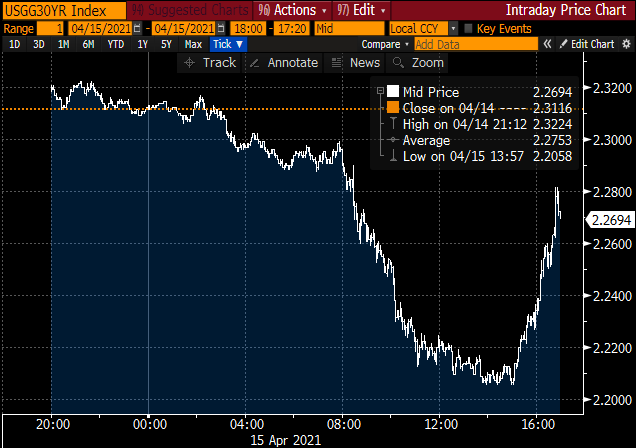 The 10-yr yield fell as low as 1.51% on Thursday & then rallied to close at 1.55%. And it rallied further on Friday to close the week at 1.59%. Will this reversal continue next week? Meaning is the 2.5 week fall in Treasury rates over for now? Ira Jersey of Bloomberg said essentially yes on Thursday and Priya Misra of TD said on BTV on Friday that she sold the 5-year Treasury position she had bought at recent high yields on Thursday afternoon.

So next week could prove important for near-term direction of Treasury yields. But what was the reason Treasury yields fell so hard on Thursday after such terrific data? Obviously short covering of massive Treasury short positions was a big factor. But so was the reverse of what Tony Dwyer said in the above clip, that no will be surprised at the strength of the economy in the next 6 months. In other words, was all that strength & more already priced in the carnage in Treasury bonds in Q1?

There might have been something fundamental as well – the increasing belief that the US economic recovery will be hot but short. Or as Lewis Alexander of Nomura said on BTV on Thursday that the peak of economic strength is likely to be Q2.

Then you have the Fed’s Beige Book released the day before on Wednesday:

Last week, we featured positive comments by @MacroCharts & Carter Worth about Gold. Good calls by both as Gold rallied by nearly 2% and miners like Newmont rallied by 6.5% on the week. Kudos especially to @MacroCharts who have been right on QQQ and Treasuries for three straight weeks. What did they say this week?

This week another smart entity joined the Gold call: 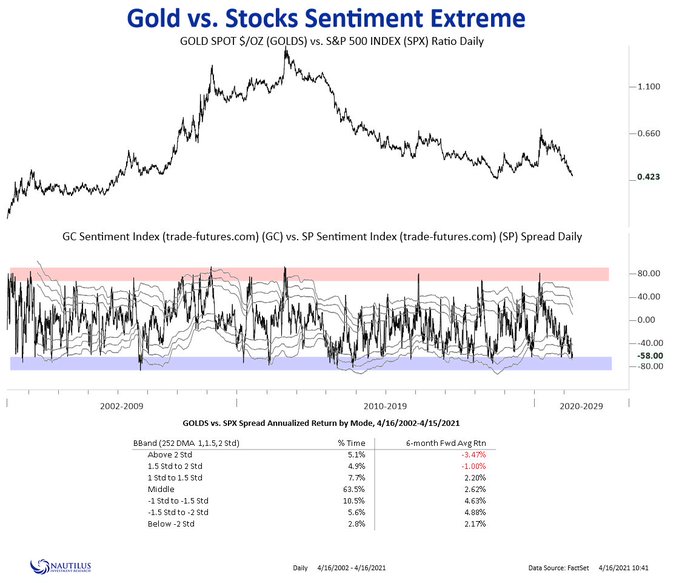 And specifically about Gold Miners: 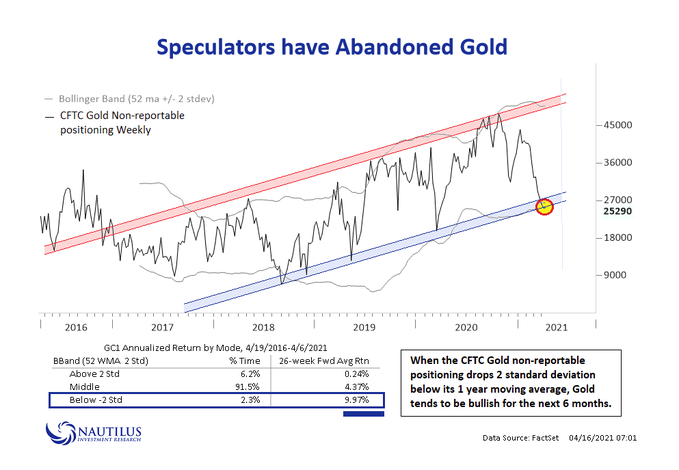