1.Out of the Blue

Out of the blue on this Friday afternoon, we saw: 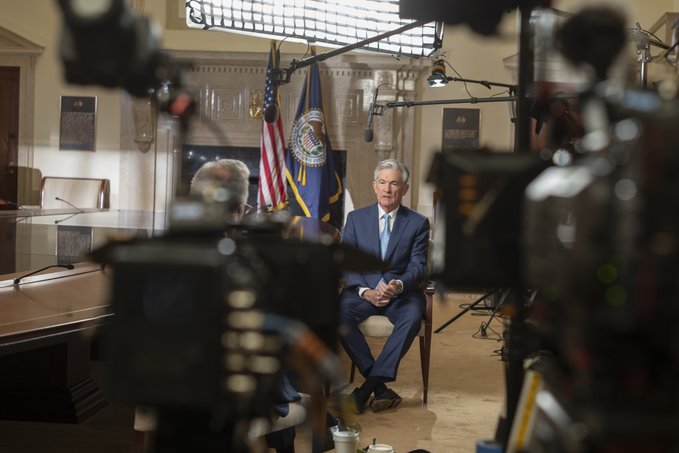 Before we could even ask why, we saw a response:

Remember what he said on his earlier 60 Minutes in May 2020 – It was simply “don’t you bet against us” couched in “you don’t want to bet against the American economy“. Recall his answer to Scott  Pelley’s question:

Will he essentially say that again arguing there is lot to be done to get to full employment & to get wages up and for that there is no limit to how patient the Fed will be? He is not going on 60 Minutes to mince words or prevaricate. Our bet is he will come across as decisive and determined to assure the American people that he is on their side.

But is he going to be speaking to the American people or to One Man (& his advisors)? That is essentially what Wharton Professor Jeremy Siegel said on CNBC on Thursday:

Professor Siegel is no simple guy. He has taught a large group of students who now have key positions. He commands an audience in financial circles & has a major following. If he was bold enough to say what he did, we feel that theme is being discussed in his network. And as a professor he can speak freely that others may not be able to.

So is it a coincidence that Chairman Powell announced he will be on 60 Minutes the day after Prof. Siegel said what he did? We have no clue but we can’t dismiss the possibility.

We remembered the above “Brainard-Yellen” comments when we saw the following on Friday: 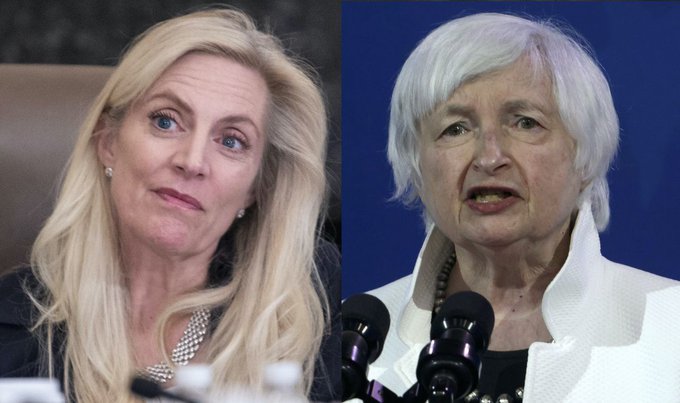 The title of Mr. Chappatta’s article is Would Punishing Panic Sellers Doom Bond Mutual Funds? The key paragraphs are:

Yellen remembers the utter mess Bernanke & she created via their 2013 taper. Brainard-Yellen recall the near disaster Powell created in Q4 2018 and they have seen the rapid sell off in Treasuries just a few weeks ago. If that was bad, they must be sleepless imagining the dreadful havoc a late 2020 or early 2021 taper might unleash.

Note when Brainard made the speech quote above. On March 1, right in the midst of the steep selloff that resulted from what Chairman Powell said. That should tell you how petrified the Fed Brain Trust is with the prospect of a market-forced taper. And they are not just petrified of the bond market’s reaction but the reaction of their political bosses.

And we just don’t mean President Biden & his team but we also mean Congresswoman Maxine Waters & the “progressive” wing.  Just imagine how infuriated they would be if a steep bond market sell-off made it hard to fund the a big infrastructure plan.

All the above apart, we hope & almost think what Powell-Brainard-Yellen should be fearing is their “fear itself“. The damage and the sell off in long Treasuries was too steep to be repeated so soon. And then second half of 2021 may have “a different look“: 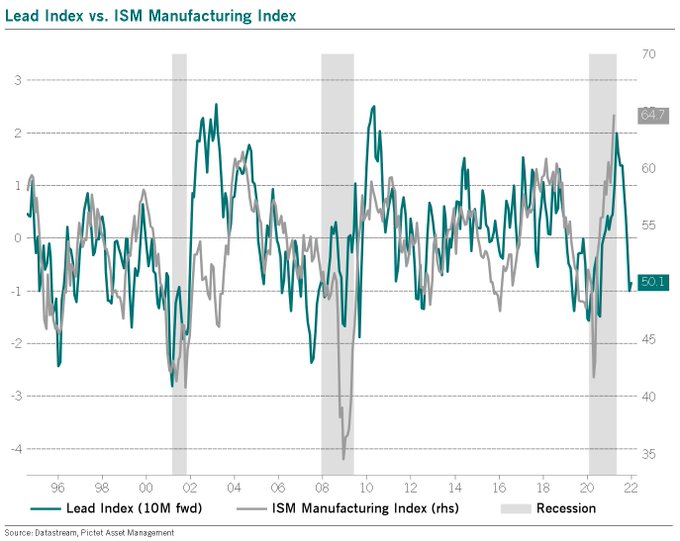 Yes, they respect Cramer, praise him, listen to him when he appears on their shows but, as this week showed again, they don’t even notice what he says on his own Mad Money show. No one on regular CNBC seemed to even know that Cramer made a big call on Tuesday, a decidedly anti-Cramer call for a top next week in the S&P and the Dow.

Well, Cramer didn’t actually make the call; Tom DeMark did. But Cramer would not have discussed it at length if he didn’t find it credible. Per DeMark as of Tuesday April 6, via Cramer: 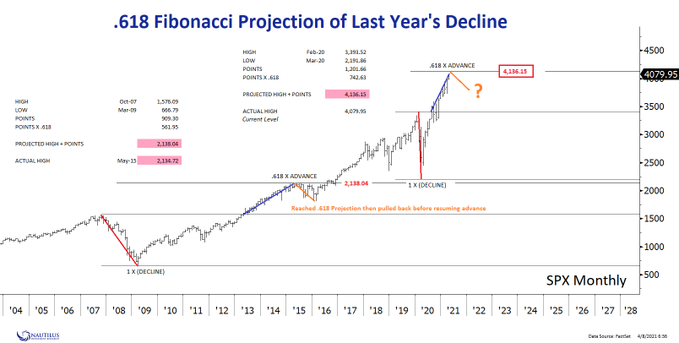 What about the idea that QQQ can go up over Dow, S&P  AND Treasury rates can fall? Guess who suggested that on Thursday?

Chartmaster @CarterBWorth of @csm_research digs into what’s behind the tech rally and if this surge can continue. $XLK $QQQ $NDX pic.twitter.com/za1Ndv1BMT

The VIX closed at 16.69 on Friday and as it happens, “The most recent $VIX “spike peak” buy signal (generated on March 5th, 2021) has “expired” per Lawrence McMillan on Option Strategist.

Interestingly, a big trade was put on Thursday a 200,000 contracts July 25-40 call spread in VIX.  And on Friday, Carter Worth of CNBC Options Action noted that VIX had filled a long unfilled gap this week and we are likely to get a pop in the VIX: 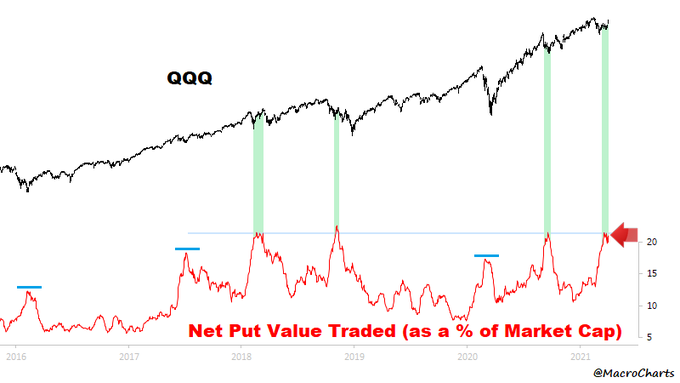 These folks have already been right on both Treasury yields & on QQQ. This week, they addressed Gold. 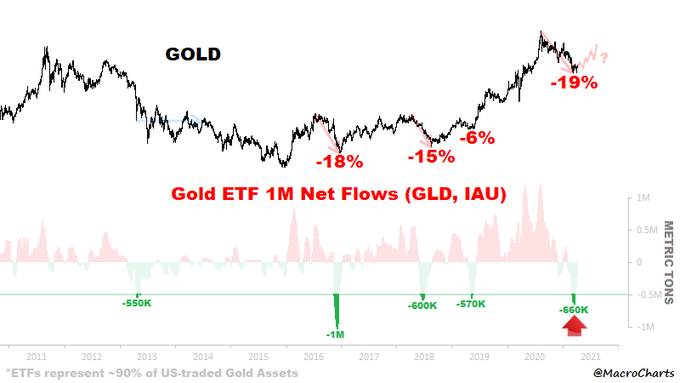 In a rare three out of three, Carter Worth agrees:

Looking for a shining opportunity? Chartmaster @CarterBWorth of @csm_research says there is a golden opportunity for one beaten down commodity. $GDX pic.twitter.com/oLARKkfQ3a