We wondered last week whether the correction in the Russell 2000 was nearly over.

Boy, did we show we have no clue how Mr. Wilson thinks? Mike Wilson did come on BTV Surveillance on Thursday April 1 morning to actually reinforce his non-positive view of Russell 2000. His message was to upgrade portfolio to higher quality because “Q2 is the actual re-opening quarter” & while “dream is always bullish“, the “execution risk goes up“. Therefore he suggested investors “move to a mid-cycle playbook” and he said that he had upgraded consumer staples over consumer discretionary.

Then came Tom Lee on CNBC Closing Bell after the close on Thursday, April 1 and commented about what the Russell 2000 contains:

What specifically was Tom Lee paying attention to?

Tom Lee also said that “institutional investors remain pretty cautious and there are a lot of things that keep them worried at night ..“. They must be a lot more worried about the Russell 2000 because, 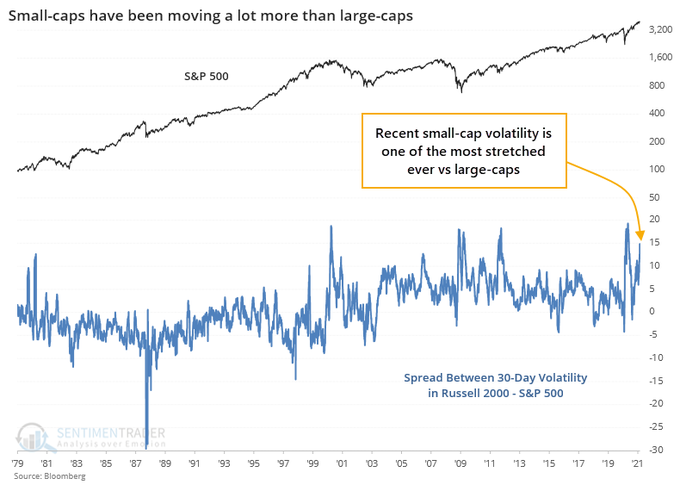 In a chicken & egg type question, what moves first – price of the Russell 2000 index or its Vol? Also would the 916,000 Non-Farm payroll number be positive for small-caps? We are not smart enough to know but we have observed that the direction of Russell 2000 prices & its volatility tend to move inversely.

During the ups & downs this year, it has paid to watch the action in the VIX as a sign, especially the action after a spike in the VIX. As Lawrence McMillan of Option Strategist reminded readers on Friday, March 26, that the “ $VIX “spike peak” buy signal of March 4th remains in effect, and the trend of $VIX remains downward.“

Again, a picture is worth lots of words:

Both Mike Wilson & Tom Lee seem unenthusiastic about Nasdaq 100 stocks. Mike Wilson said simply tech is “neutral for us”. Tom Lee said –  “to me the FAANG trade can still track the market; So I am less concerned about someone who wants Microsoft, Apple, Amazon, Netflix ” . 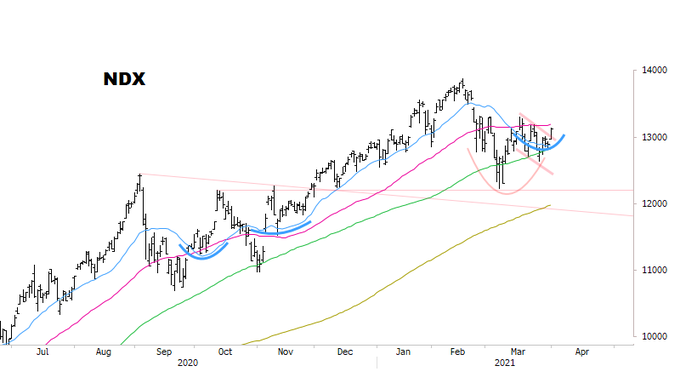 What do historicals suggest? 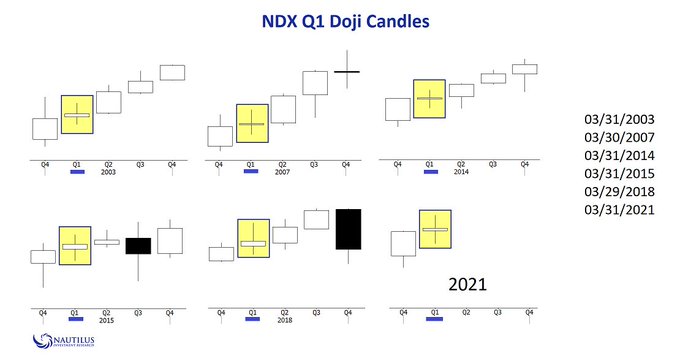 Regardless of what happens in Q3 & later, the above seems to say Q2 is fine for NDX. And isn’t a broad index usually driven by a sector with a history of leading on the upside? 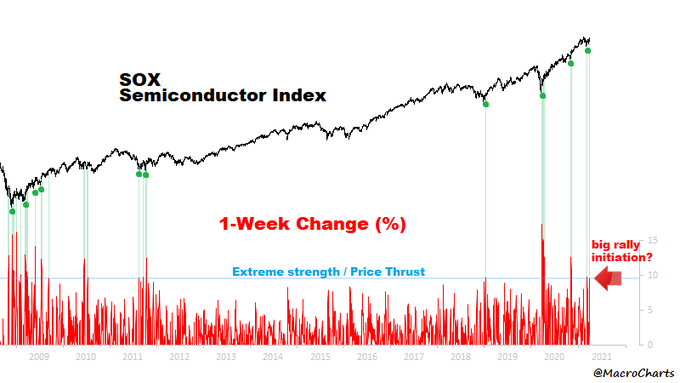 Taiwan Semiconductor (TSM) announced its plans to invest $100 Billion in the next three years to expand its manufacturing capacity and its R&D. Jim Cramer asked Micro CEO, Sanjay Mehrotra, whether this is a return to the old expand & bust practice? Mehrotra said No. Cramer must have believed Mehrotra’s explanation because Cramer said afterwards – “I think this is the golden moment for semi-conductors“

Of course, the biggest risk for NDX stocks is what Treasury rates do, especially after the 916K NFP number on Friday. More on Treasury rates later but we tend to concur with what Jon Najarian said this week that if the long Treasury rates move only within a narrow band of where they closed on Thursday, then the NDX can have a nice rally.

Before we get to Ed Hyman’s adjectives about what is going on, below is a tweet about “something special happening”:

He also showed us how much stocks love April:

But is it really over-doing it to imagine the S&P going straight to 4300-4400? Some say so & point to a lower short-term ceiling:

Actually the “turn” mentioned by Benn Maldonado may be much more than a mere “turn”; it might actually be a top for the stock market if the models of Tom McClellan prove correct. In his article this Friday titled “Clarifying Oil’s 10-Year Message For Stocks“, Tom McClellan writes:

So he moves to discuss the message of his M2/GDP shifted 1-year forward model:

Remember that Tom Lee’s call for a rally to 4400 is for the first half of 2021 & not an year-end target. Also look again at the Nautilus tweet in Section 2 (NDX) above to see that the NDX rally tends to peter out in July.

Going back to Mike Wilson’s call to move up in quality in stock portfolios, is it possible that it could be the new “value” trade? 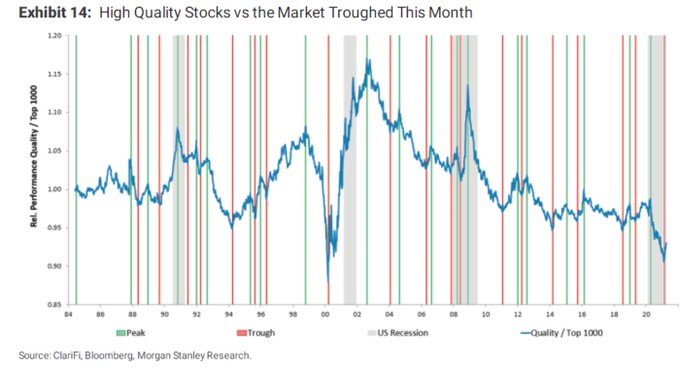 However, XLP, consumer staples ETF was down 76 bps this week, a 180 bps underperformance to the S&P this week.

Who said that? Only the guy who has been voted often as the #1 Economist by Institutional Investors. And what is he being humble about? Read & listen to what Ed Hyman said on BTV Surveillance on Thursday morning:

First his comments about the economy:

Second his comments about the stock market:

And all this was before the 916K jobs number on Friday. Brian Chappata changed his tune about the economy and wrote the following in his Bloomberg article Jobs Report Shows Gain of 1 Million and Heralds New Economic Era:

The most important chart of the week could prove to be the one below about how the 5-year Treasury yield reacted to the 916K NFP number on Friday morning: 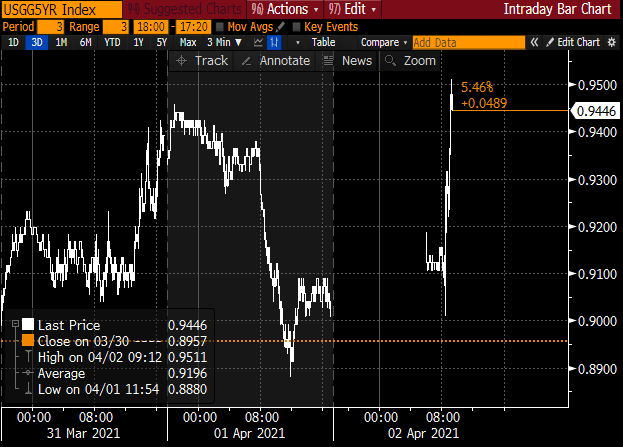 In fact, the action in rates was weird on Thursday, the day the manufacturing ISM printed a stunning number: 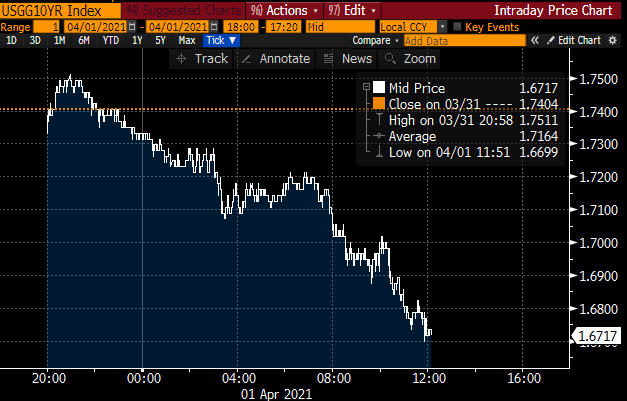 Frankly, we don’t understand what happened to Treasury rates on Thursday, April 1. Was the Treasury market playing April Fool with investors? Or was it the final stage of the Treasury buying as a part of Q1 rebalancing? After all, the rebalance had to be huge given the worst loss in the 30-year Treasury since 1976: 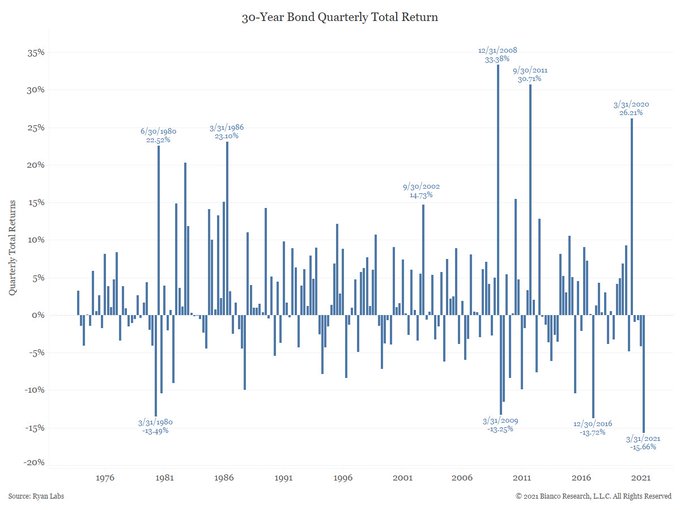 Discretion being the better part of valor, we prefer to wait to see how the long end of the Treasury market reacts next week to Friday’s big NFP number.

How the Dollar reacts to the 916K NFP number will be interesting as well. After all the Dollar is still heavily shorted & now the fundamentals of the US economy should provide support to the Dollar. And the 39-month Trough cycle has already bounced: 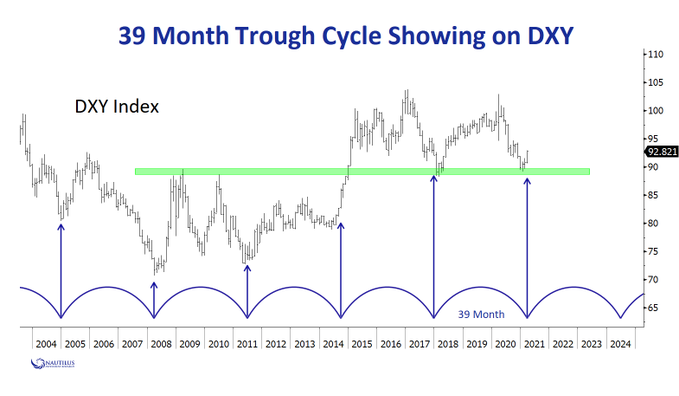