Wasn’t it boring two weeks ago? Powell & FOMC did a little bit to enliven things on FOMC Wednesday afternoon. But that was baby stuff compared to the fireworks set off two days later by the flame throwing Bullard. Not only did he entertain us but he also delivered an opportunity for some real profitable trades, at least for the cognoscenti. Just think if you were like BlackRock’s Rick Rieder, what could you  have bought & sold on that Friday afternoon &/or on Monday morning?

Actually Rick Rieder did come on CNBC Closing Bell on Monday & say that Friday provided (to him & this cohort) an opportunity to buy & sell. But he didn’t even hint at what he bought & sold. And no CNBC Anchor pressed him on that. Guess CNBC remains a for & by forum for the pezzonovante!

So it does feel as if we are back to where we were two weeks ago albeit with a bit more conviction – that inflation is indeed high right now (Core PCE up 4% yr/yr) regardless of where it might go. So short maturity rates are unlikely to go down much. In fact, some are calling for the 5-year yield to cross 1% on the upside. Seems easy enough so some just as it seemed easy to others to think of the 30-year yield breaking 2% on the downside.

So what do we do? Wait for next Friday’s Non Farm Payroll number. 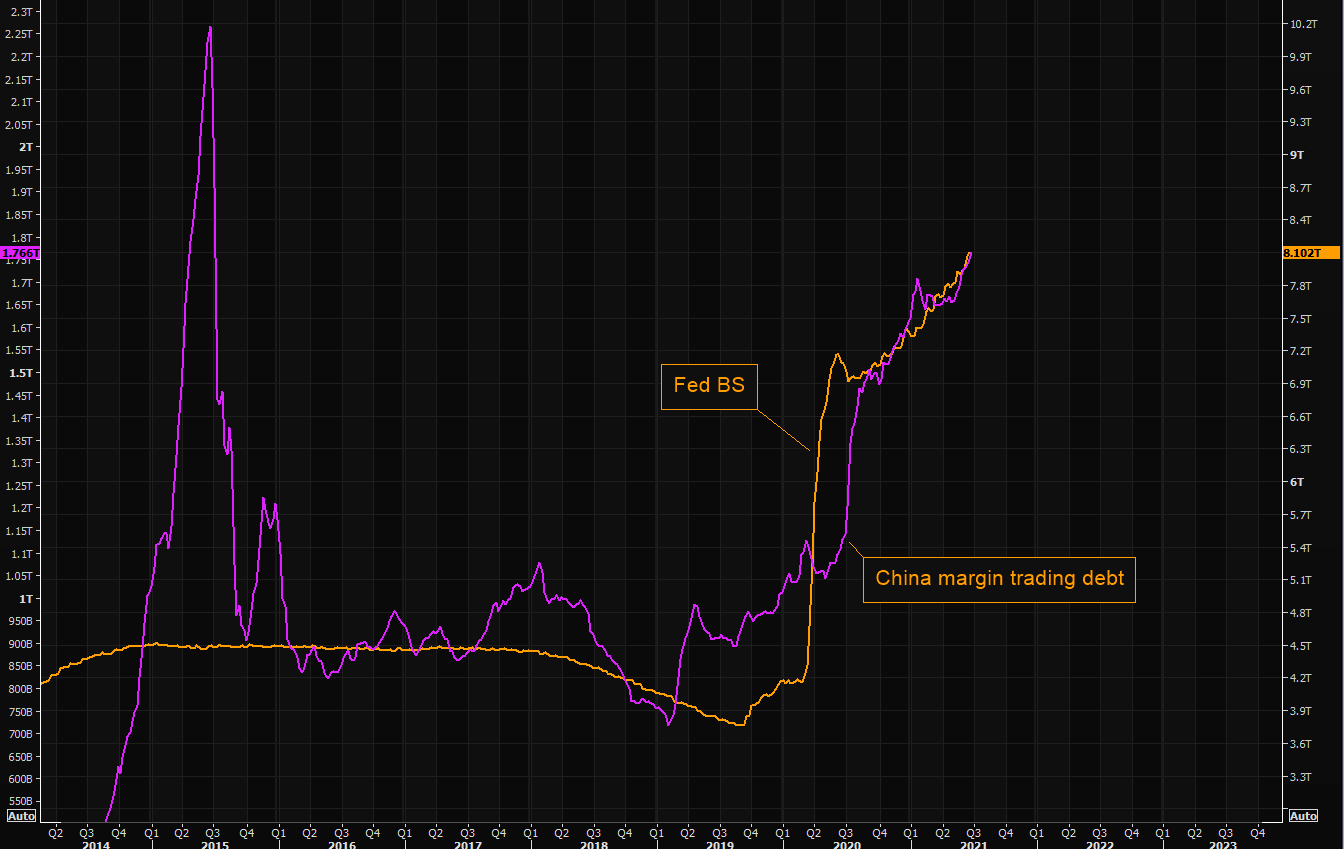 Some might remember our old discussion about the MC/BS measure – Market Cap to Fed’s Balance Sheet. Below is looking another way at the same concept to gauge the actual rise in S&P for the past 13 years: 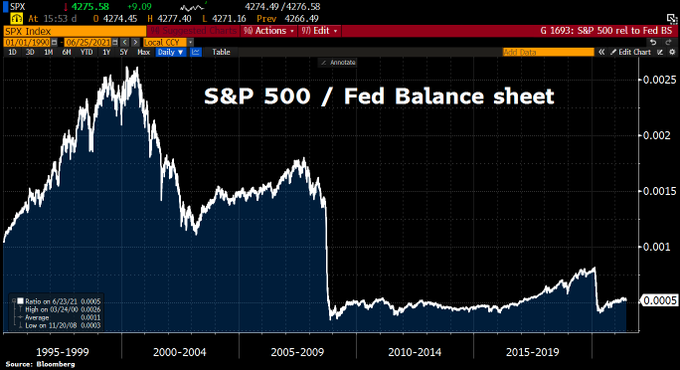 Look at this & understand that the Fed’s Balance Sheet is not coming down unless we actually get sustained inflationary growth for more than a couple of quarters. Perhaps that is what Chairman Powell means by evidence-backed FOMC monetary action instead of prediction-based action. Others might look at the last 13 years and blame the Fed for being the main driver of increasing wealth-income inequality in America.

We owe another thanks to Signor Bullard. He did end up scaring a lot of people by showing what might happen to stocks if Powell were replaced by another Chair later this year. Did you notice how  Congresswoman Maxine Waters was humbly polite to Chairman Powell and actually requested him to keep advising them? We do hope that the Biden brain trust also got the same message that replacing Powell might prove risky for 2021.

First, the positive from Tom McClellan & his article – VIX Open Interest Is Falling, Which is NOT a Feature of Price Tops.

But does that also rule out short corrections? We don’t know for sure but we doubt it. 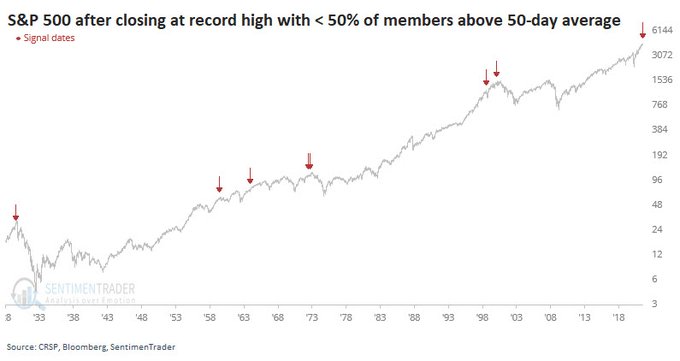 Similar story for the Nasdaq: 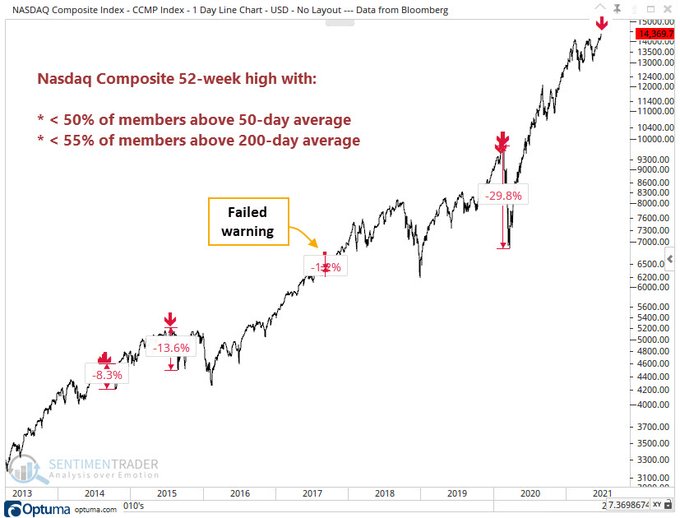 Where are the daily sentiment numbers, you ask?

How are DeMarkians looking at this? 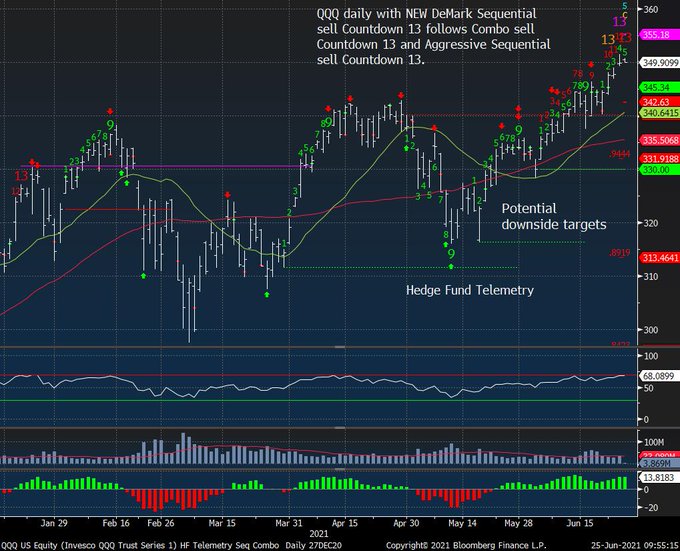 But with all the above negative stuff, is there any thing missing? According to J.C. Parets, New Lows Remain Nonexistent. He compares the expansion in new lows in 21-day chart (month) & 63-day (quarter) chart. He saw “a spike in  21 day lows last week … an expansion all the way down the cap scale, from large-caps to small-caps“.

In contrast, he added – “Where we’re NOT seeing this is in the 63 day lows. It’s an absolute ghost town.” 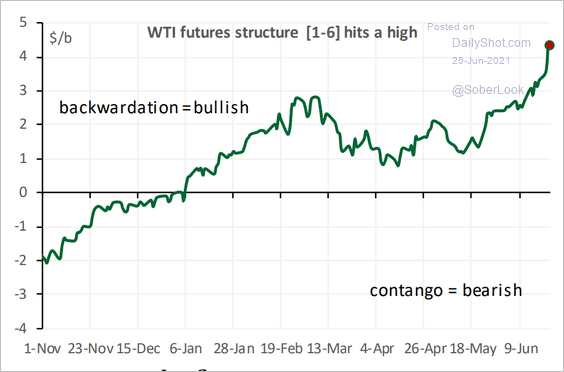 In contrast OIH, the Oil Services Holder, is down 2.7% in the last two weeks while XLE is virtually unchanged.

We are not going to get into the trading of Bitcoin. But we would like to recommend the clip below for an overview and a glimpse into how institutional talent & practices are coming into Bitcoin. Hear from a former regulator who is now a Bitcoin fund manager:

**Please note the change in email address for feedback. We are going to try free business gmail account instead of paying for email.