Friday June 4, or NFP Friday, was a “a wonderful day for the $QQQ + $TLT portfolio” as Bloomberg’s Brian Chappatta tweeted that day. That continued for this entire past week with TLT up 1.7% (EDV up 2.2%) & QQQ up 1.6% last week . So we should look at TLT first, in fairness as well as in relative macro importance.

The U.S. 10-yield broke hard through the 1.50% level to close at 1.454%, down 10 bps on the week. The 30-year yield fell 9 bps to close at 2.143% despite a ho-hum auction. The simplest & hence the best comment came from Carter Worth (resident technician of CNBC Options Action) who said “this is so unexpected for consensus that it’s got more to go“. How much more? To 1.25% said he in the clip below:

Another chart comes from J.C. Parets in his article Divergence City + Bonds Break Out!

And the Fed is doing their own thing and MOVE, the bond-VIX (for short) is responding as the VIX does: 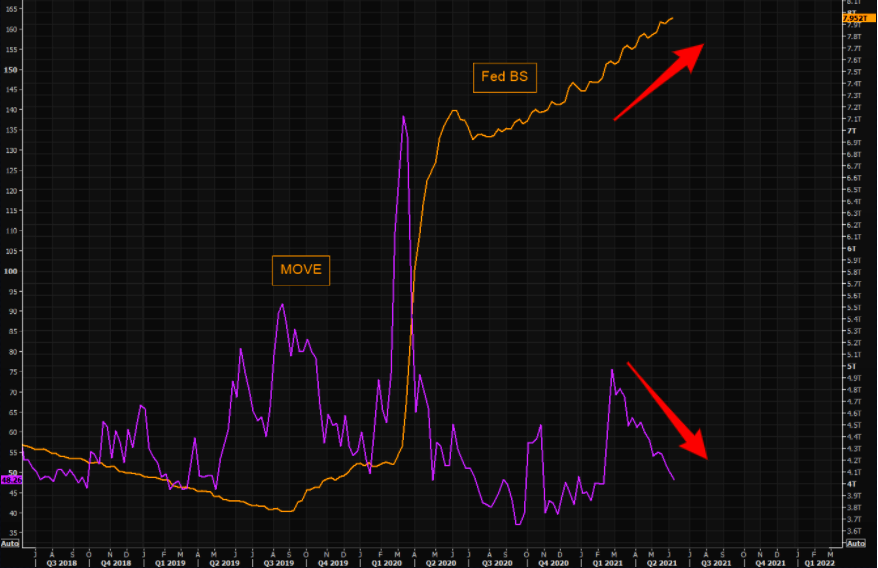 Besides the covering of massive shorts in Treasuries & the increasing attractiveness of U.S. rates to foreign investors, there may be another reason, a nasty reason, for the fall in Treasury rates. 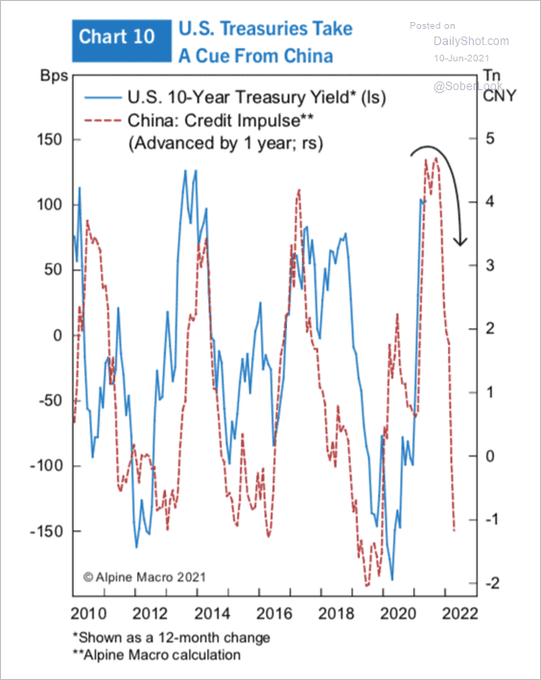 Now if China rolls over, then US ISM could peak & roll over as Raoul Pal said this week on RealVision. He also said that the DeMark monthly chart hit a 9 this week and added that “the monthly 9-signal has a 100% track record for calling a top in yields” and so tech stocks that “look like zero-coupon bonds to infinity (duration)” will do well and “if growth is not as high as we thought, they are going to explode“.

That brings us to FAAMG & QQQ, the first part of Chappatta’s “QQQ+TLT portfolio”.

Tom Lee upgraded FANG from Underweight to Overweight for a simple reason. How simple? He pointed out that FANG took it the hardest from the rising rates move and now with that interest rate headwind gone & their secular growth story, it should be great for FANG. He added:

Hmm; is “trimmed” the right phrase for what investors have done with tech stocks, per BofA via The Market Ear? 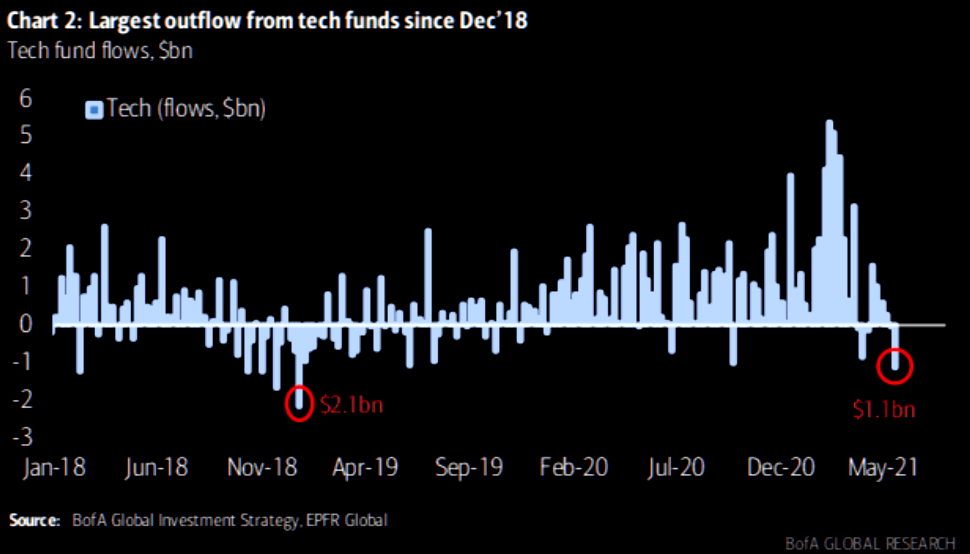 OK, so what is a target for the NDX? 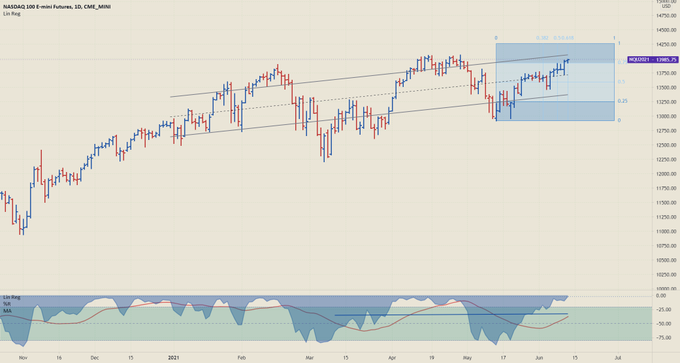 High Kudos to Jim Cramer & Larry Williams for the call to buy AMZN on Monday, June 7. Cramer relayed this Williams call to viewers of his Mad Money show in his Off the Charts segment. Needless to say CNBC is so ashamed of this call & these types of segments that we can’t find any trace of this clip on CNBC.com. But the stock & its investors listened clearly as the 5-day chart shows:

Finally slowing of or in China is not as much of a negative for FANG as it is for the broader S&P, or the industrial sector. 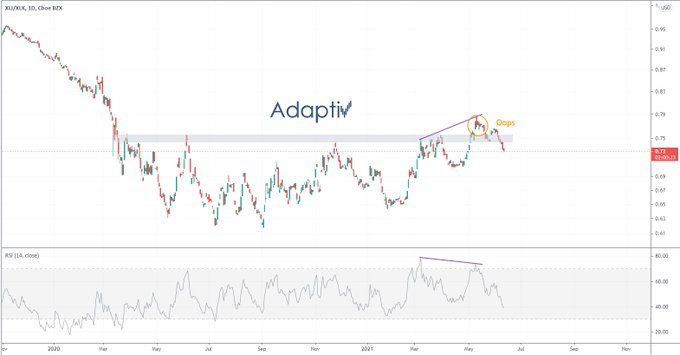 But is the steep fall in interest rates bullish for the S&P? Look at the early Thursday morning reaction in the S&P to the stunningly hot inflation report.

The 10-year yield had closed at 1.489% on Wednesday. After the stunningly hot CPI number came out on Thursday morning, the 10-year yield jumped about 3 bps to 1.52% plus and stocks jumped up as well. But as the 10-year rate began falling, the S&P fell as well as the above chart shows. And the S&P meandered till the last 15 minutes or so on Friday when it made small vertical move.

We wonder whether the steep fall in rates is making the market a bit nervous. And it is not as if the system is short of cash liquidity. Far from it: 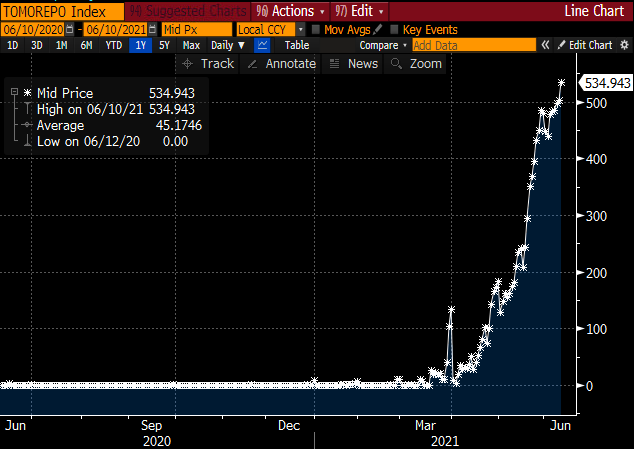 Look at the above picture and look at the one below: 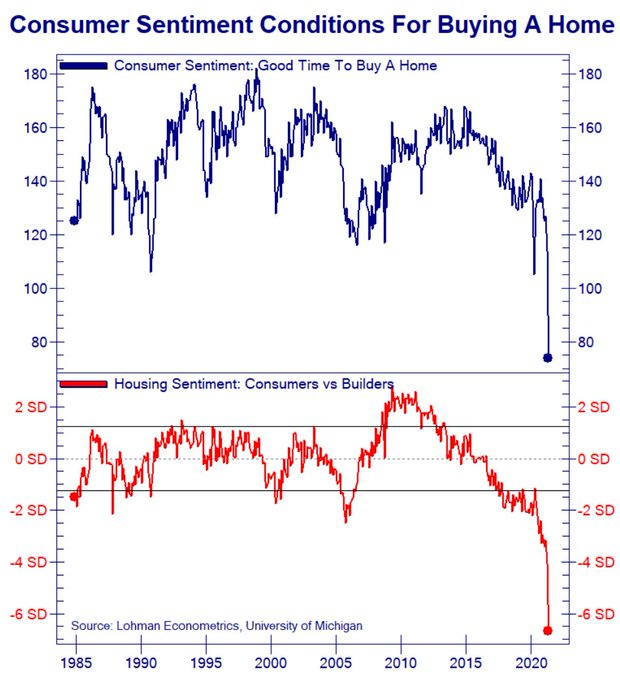 And look what we see despite the determined buying of houses all across America by Blackstone, BlackRock & cohort (courtesy of J.C. Parets): 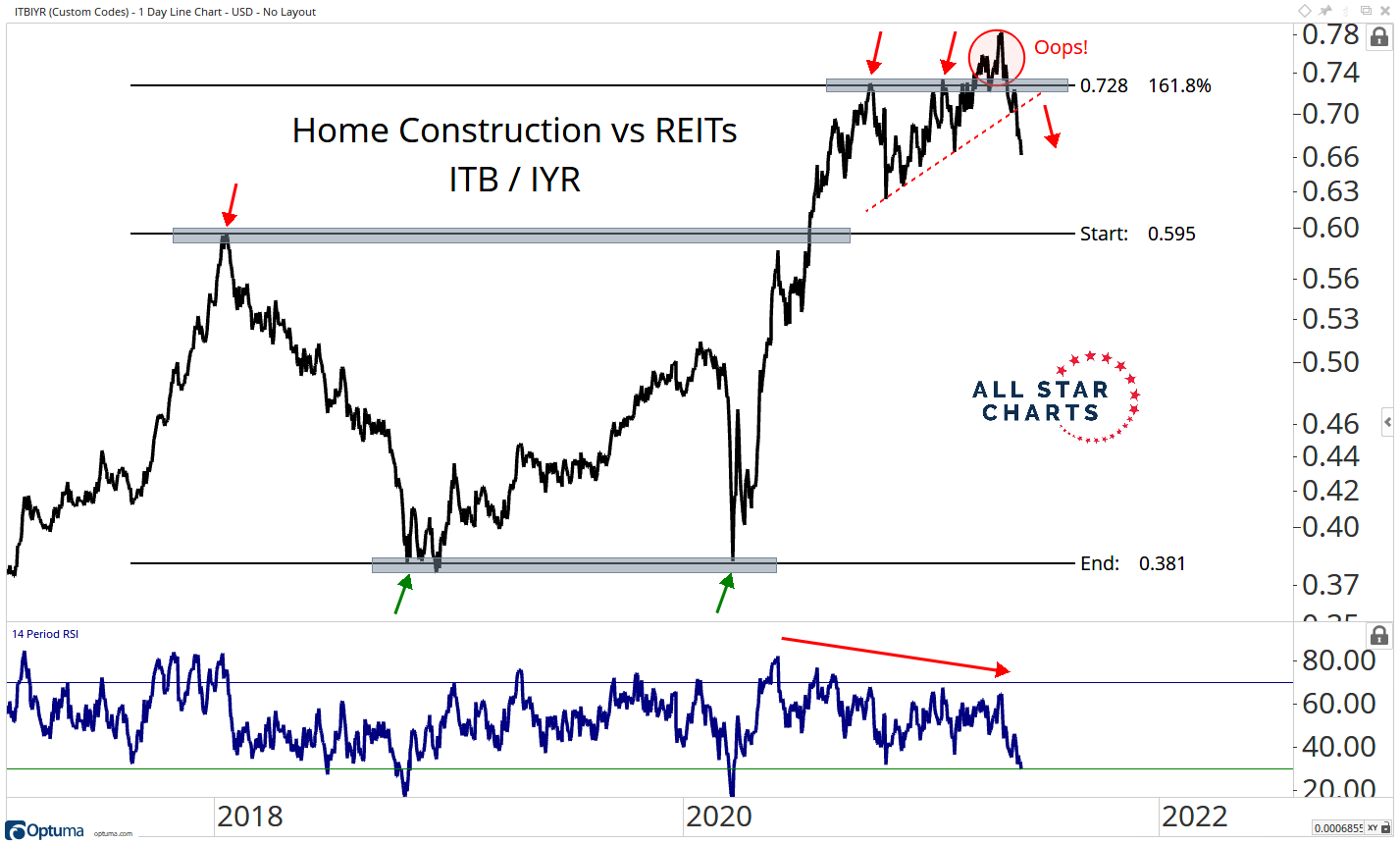 But that is just housing. Cars look great given the action in GM & Ford, right? 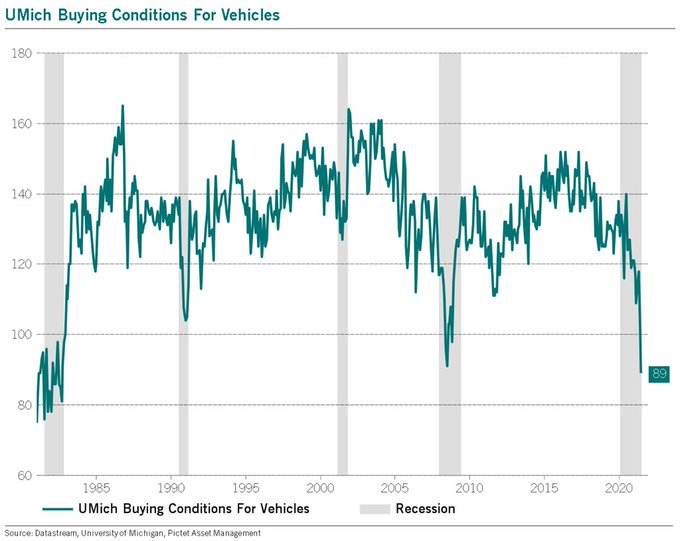 Is this a case of high inflation in a highly leveraged economy becoming deflationary or is the above a sign that income support from the government has already peaked? Or is the economy saying the Biden team is nowhere close to getting a real stimulus deal that will put incomes in the pockets of middle class Americans?

So, all of a sudden, next week’s FOMC statement & the Powell presser became more interesting.

What did a veteran observer write about the S&P?

One sees a consolidation resulting upwards: 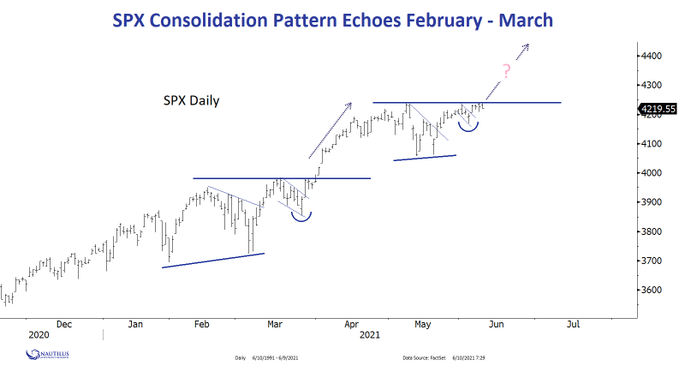 We all have realized that the bond market was ready for a hot CPI number.  The question now is whether the stock market is prepared for a correction. 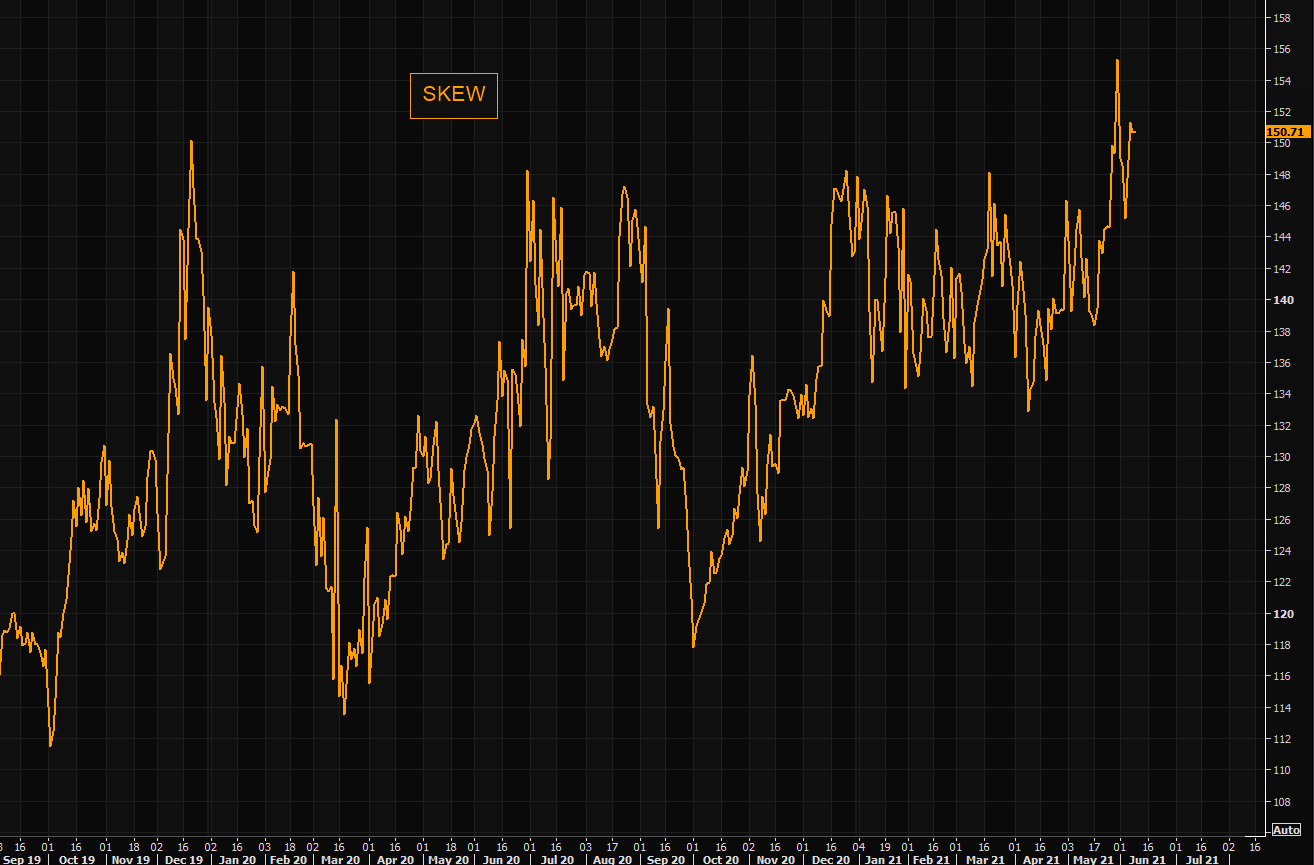 What about the VIX? Lawrence McMillan writes:

What is DeMark saying, you ask? We have no access to him but Jim Cramer does. Cramer reported on Friday that S&P is at Demark 11 count and needs 2 more up days to get the 13 peak signal. But it also has to reach DeMark’s upside target of 4335-4344. On the other hand, if it sells off too soon or if it doesn’t hit his price target, then this whole set up goes out of the window.

After all this, the real question is what does the Fed signal on Wednesday June 16? Do they fell cornered by the fall in Treasury yields? Or does it strengthen the hands of those who want evidence & not predictions before they talk about talking about taper? We will find out on Wednesday.

Both Jim Cramer & Josh Brown noticed this week that the Indian stock market is on fire. Below is a sensible answer by Josh Brown to a question by a viewer about buying ICICI Bank.

Raoul Pal gave a similar answer to a question about when to buy into the Indian Stock market. That answer, that clip and a more detailed discussion about the Indian market rally is in our adjacent article – Financializing 1.3 Billion People; Corona Virus 2nd Wave & Indian Stock Market.

Now sadly back to a discussion we are fed up of.

We have been critical of both networks & view both as having a hand in anti-India regime-change efforts of the US Media. While we feel Bloomberg.com has more dedicated anti-India opinionators on its payroll, the broad Bloomberg.com network does cover India in a factual manner.

Look at our adjacent article about Indian stock market that features not just one but two factual & useful Bloomberg articles about Indian Central Bank. Also we covered in detail an excellent interview on Bloomberg TV on May 6 by Anu-bhuti Sahay, a Standard Chartered Bank economist in Mumbai. That interview was crucial to our view of how the 2nd wave was affecting the Indian economy. We urge all to watch it:

Now compare the above to the pathetic, in fact appallingly stupid, video published on CNBC.com this  Thursday, June 10, a video that is the work of one Timothyna Duncan, Multimedia Journalist at CNBC.

Timothyna Duncan, a proud Ghanian ” journalist” & hence a specialist on India, asks in the beginning “ … thousands of people were losing their lives every day, but a second nationwide lockdown was nowhere to be seen?“.

Yes this was being published & distributed on June 10, this past Thursday, the same week when the entire world is talking about India’s stunning recovery. This “journalist” also uses CNBC’s India coverage anchor in Singapore to support her unbelievable stupid video clip. 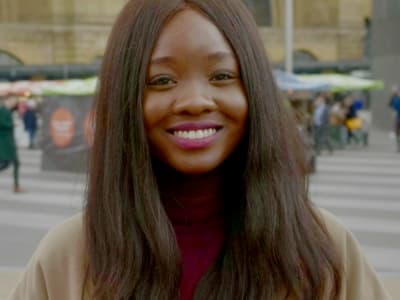 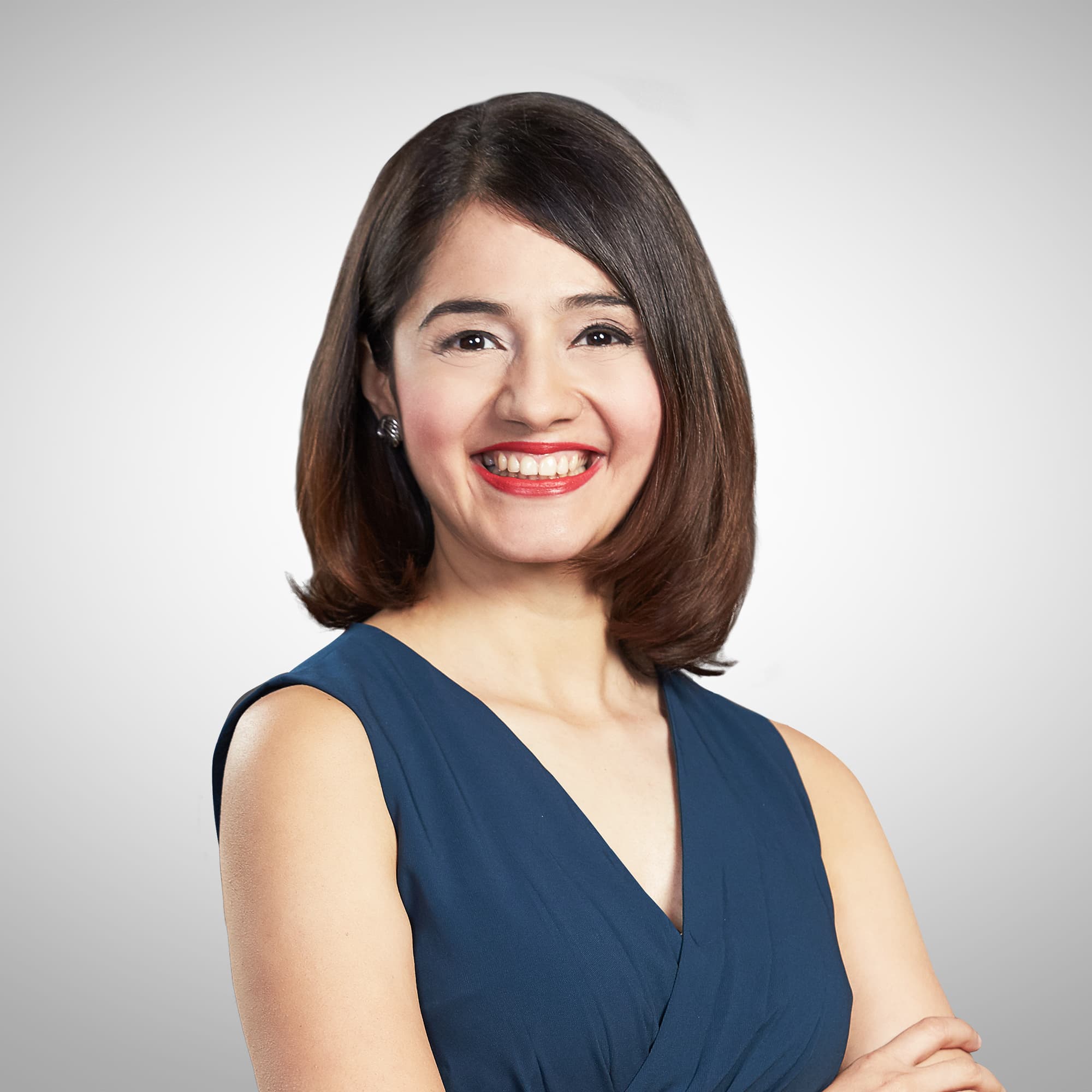 Now you see why we never ever watch CNBC Asia but usually watch Bloomberg Asia TV in our late evenings. We find CNBC’s coverage appallingly bad.

How did we find this Duncan-Gill video? It was featured at the heart of a Friday, June 11 CNBC.com article about daily deaths in India. The article was centered on a photo dated April 26, 2021 about a patient wheeled into a hospital for Covid-treatment! And the article begins with:

That wasn’t it. CNBC’s Tyler Mathisen featured a solitary center doubling its daily death total from an earlier count. Apparently, per Tyler Mathisen, that center had omitted to report 4,000 deaths on one specific day.  Mr. Mathisen then expressed concern that previous figures from India may not have been accurate.

Understand Mr. Mathisen is no newbie. He is probably the most veteran & seasoned anchor at CNBC today. And, he used to be the Managing Editor of all of CNBC. So we cannot ignore his slants as we might of a lower level un-informed media journalist like Timothyna Duncan. Why does his expressed “concern” bother us?

Note that neither the CNBC.com article nor Tyler Mathisen pointed out that even by doubling the entire number of Indian deaths, the figure would remain short of the corresponding per-capita deaths reported in America. And do you think either the CNBC article or Mathisen or Duncan even mentioned the raging discussion about deaths in America miscounted in states like Michigan or New York? Of course not.

So what was the point of the “concern” expressed by Tyler Mathisen or of the article on CNBC.com? It certainly does not seem motivated by humanitarian issues. No indeed. To us, both seem to have one purpose – cast mud on Indian Government.

We do have a slight soft corner for Tyler Mathisen because he was the main trigger for our Blog. Back in 2008, we had a couple of conversations with him which told us that talking to him was useless. So we began this Blog. We don’t think he is a bad guy. Actually he is quite a decent guy based on our interaction with him. But he is set in his mind about Indians as a race and he is unwilling to accept that he knows nothing about Indians or India to use a famous CNBC phrase of Cramer. That’s fine too. But then why let him opine on India on CNBC TV?

Finally, CNBC allowed its Chinese correspondent Yunice Yoon to call the current outbreak in Guangzhou as due to “India virus”. But, to our knowledge, no CNBC correspondent has been allowed to label the Corona Virus as China virus or Wuhan virus. Could it be because CNBC China is a huge network inside China while CNBC is almost not in India?

But wait a minute – CNBC is a large nationwide network inside India with the CNBC brand while CNBC, to our knowledge, doesn’t run a network in China. Yet, CNBC disparages India and allows its Chinese correspondent to use India virus strain terms while banning China Virus or Wuhan Virus terms on CNBC!!!

If this is not utter contempt of Indians, what is?