What happened between about 1:50, ten minutes prior to FOMC statement, and Friday’s close?

Apart from again killing volatility in all markets, the Fed did something important: 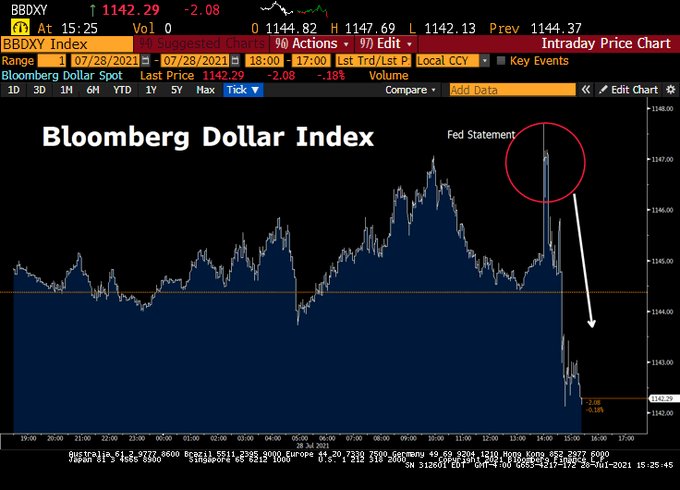 Despite this performance of Jay Powell and his commitment to increasing employment & incomes, the idiots in the Biden coalition keep arguing that Reappointing Powell to Chair the Fed Is a Bad Idea.
2. U.S. Economy
We focused first on market movement post FOMC because we all know the Fed is more focused on markets than the economy. But, just for the heck of it, let us look at a couple of charts about the economy: 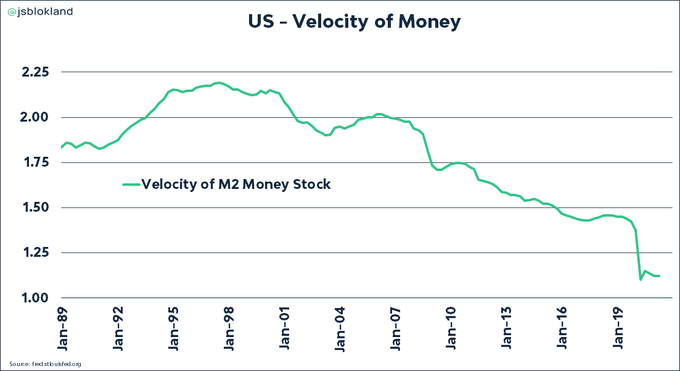 That is just one factor. What about an economic index? 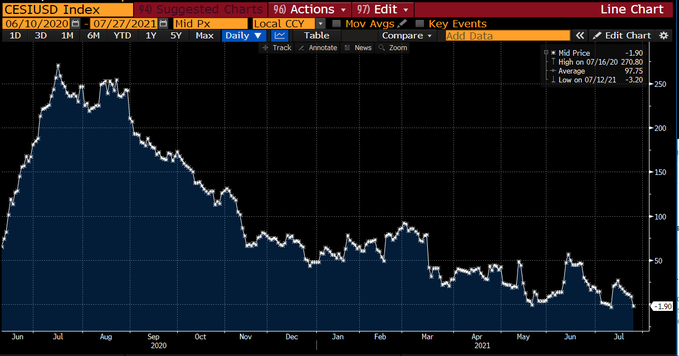 How about some words, highly descriptive words?
That doesn’t sound all that bad. What will make Powell-Biden throw in more money?
That’s one hand of the economy. Is there an other hand? 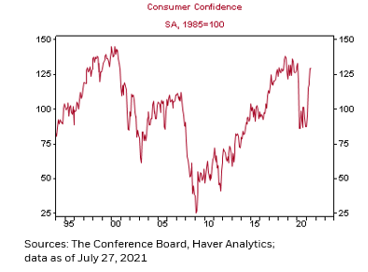 But isn’t the economy now structured around the stock market? 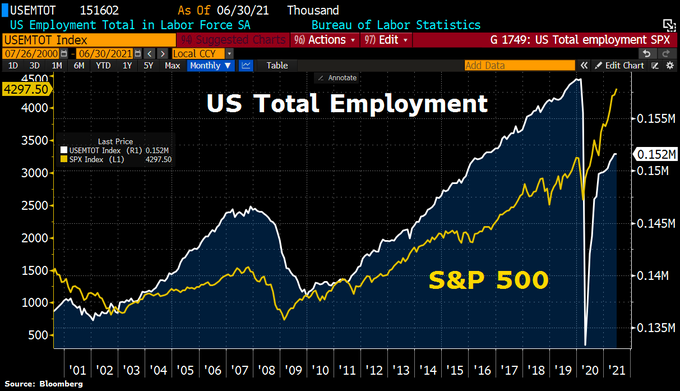 3. The Big Factor for the economy

Sadly the brain trust that came to power last November is now proving to be both clueless & pathetic about the Covid mess in America. The viral spread of the Delta virus strain is casting serious doubt on where the country stands & whether the FDA-CDC have any clue. We have been appalled at the apathy & political indecision we see in the people in power.

It has been well documented that the efficacy of the vaccines, especially the Pfizer vaccine, drops to 84% within 6 months of vaccination. As we recall Pfizer announced a third booster shot to those who have taken the first two shots a few months ago. But both the FDA & CDC dismissed that idea, clearly for political convenience of their masters.

Frankly, Cramer was neither direct enough nor angry enough for us. The most descriptive fact we had heard is that this Delta strain distributes 1,000 times more particles from an affected person’s nose than the original virus did. That should persuade everyone to wear a surgical face shield like the one Doctors wear in hospitals. Such a face shield is the only way to protect your face, nose & mouth from such high frequency emission of particles, at least to our simple way of thinking.

To be honest, we personally have been wearing a face shield AND a mask for the past several months, even during the summer. We got a few looks especially in parks at children’s activities. But New Yorkers being polite, no one has said anything. Now look what we heard after Friday’s close – CDC study shows 74% of people infected in Massachusetts Covid outbreak were fully vaccinated. The article added,

So it seems to support what we had heard earlier that this Delta strain sends virus particles through the air and, as we recall the quote, “they breathe near you & you get it“.

Wonder what CNBC’s David Faber thinks now, the same Faber who mocked those who kept wearing masks a few weeks ago? Fortunately, his sometimes colleague, Sara Eisen was smart enough to ask the U.S. Surgeon General about the 3rd booster shot in America, something that Israel has done already. His reply was OK but not as positive as we would have liked:

What has been the experience of other countries that fought the Delta strain? 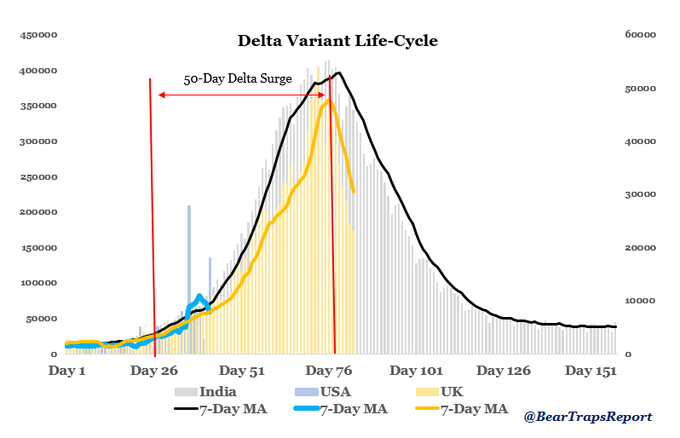 But there is a caveat, as we recall. The above life-cycle was based on the involved governments panicking near the peak. As of now, all we see in America is a panic to discuss & debate. That is why we can’t wait for the morons in DC to act.

One positive note was sounded by the balanced and sane Dr. Scott Gottlieb despite his scary statement about 1 million Americans getting infected every day:

Below is what we had written two weeks ago on July 17:

This week, the Fed clearly refused to taper. Inflation does seem to be cooling down. May be it is now Sinema & not Manchin but the infrastructure bill seems to be farther ahead now. What if the Delta virus behaves in the US as it did in other countries & starts falling off by August end? And, hoping fervently, President Biden reappoints Powell to another term? Will that finally trigger a rise in the 10-year yield?

We may not need all that because we did get a powerful signal from a “stealth bond king” this week. Look what happens when Apple sells bonds? 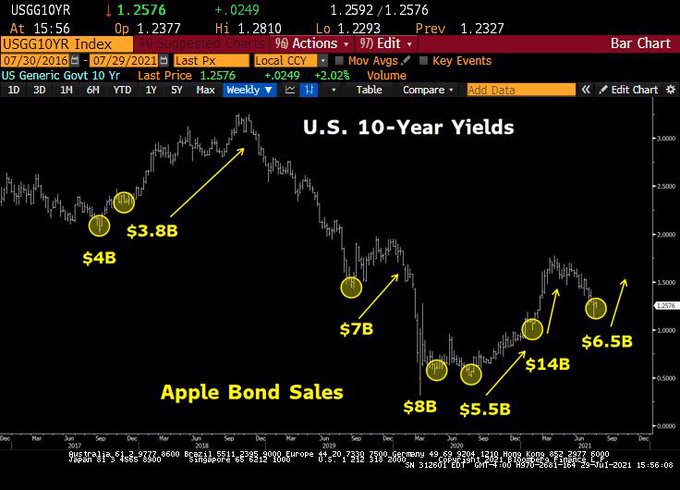 It was polite of Larry McDonald to tweet the below:

It was polite but misplaced. Actually the above-mentioned shoutout was first from Lisa Abramowicz, a co-host of the Bloomberg show. When she spoke on air about the above chart, Jonathan Ferro asked her to forward the chart to him. We get that these three are big-shots while we are simply ordinary viewers of Fin TV. But we do think in our simple manner that credit should be given where credit is due. And the credit for the shoutout of the above chart of Mr. McDonald goes to Ms. Abramowicz & not to Mr. Ferro.

But is there any piece of evidence that might support the above trigger? 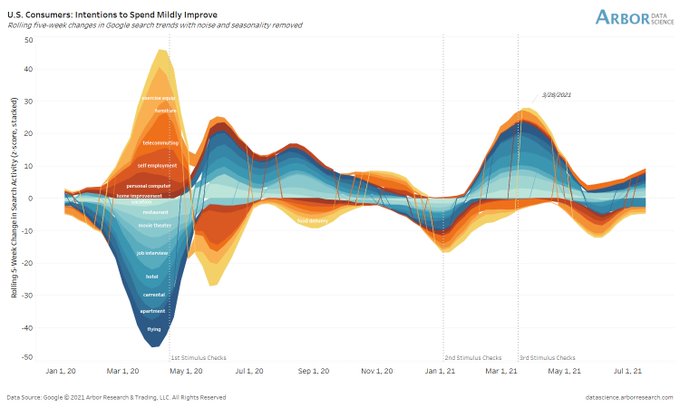 5. Stocks
Big stock indices meandered this week despite some earnings fireworks – Dow was down 36 bps; S&P down 39 bps; NDX down 1%; Russell 2000 up 72 bps. The Dow transports were down 2%. The real & unsurprising debacle was in EM indices with EEM down 1.7%; EWZ down 2.6%; EWY (Korea) down 1.6% and Chinese ETF down 5% or so. The major Indian ETFs were flat to up on the week.
Lawrence McMillan of Option Strategist wrote on Friday:

On the other hand, Bob Lang of Explosive Options had an email warning of sorts:

Going more specific, what about Small Caps & their message for the S&P? 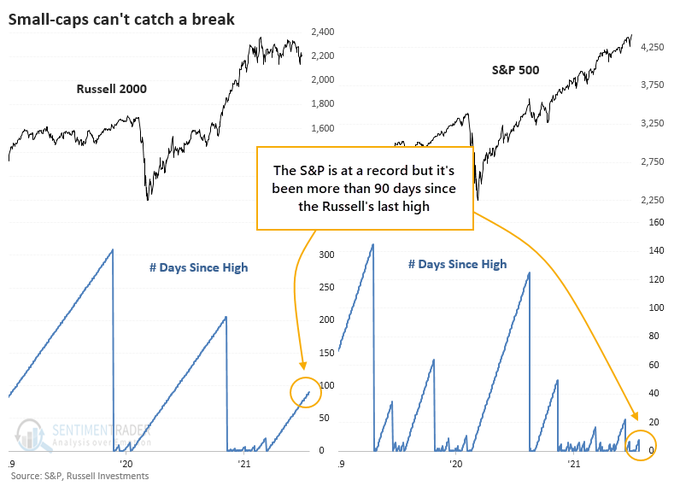 In the linked article with the same title, Sentiment Trader wrote:
Their next point was about the new relative low of financials: 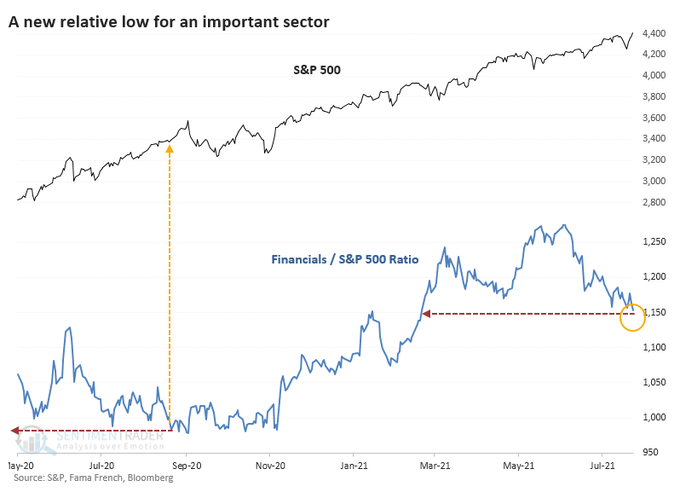 The linked article points to a reversal:
What about Emerging Markets, you ask? 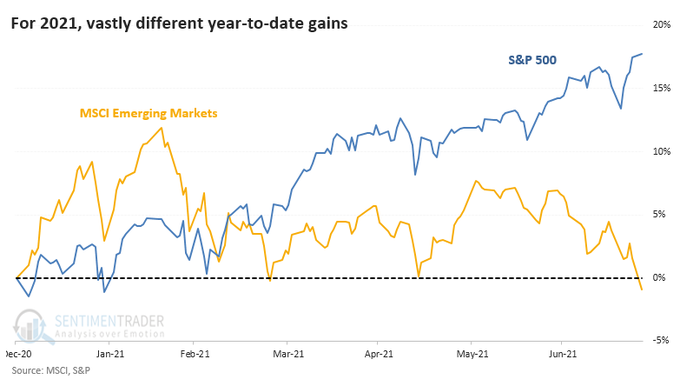 What is the conclusion of the linked article?
We must add that a few smart people have stepped up and said buy Chinese ETFs, including veteran Dan Niles. It is a trade that makes sense for a bounce. But fundamentally, U.S. – China are veering apart further & further. Also we think we must make China pay for the steep losses the Chinese Government inflicted on US Investors.
But should investors really be in stocks at this point? Not really said J.C. Parets in his Friday missive: 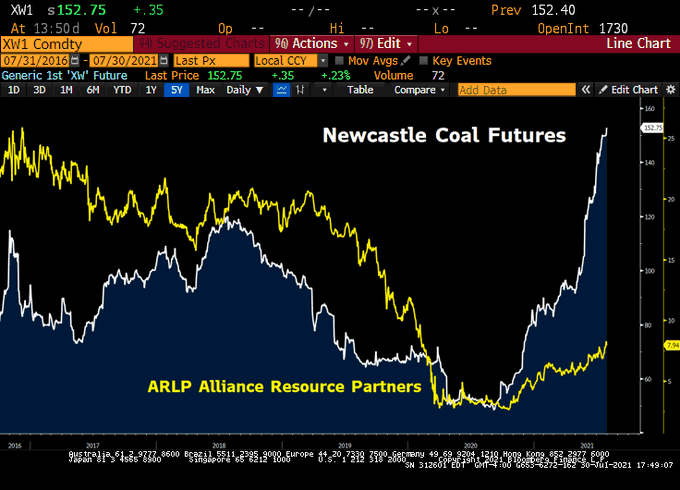 Going from base to precious, we have: 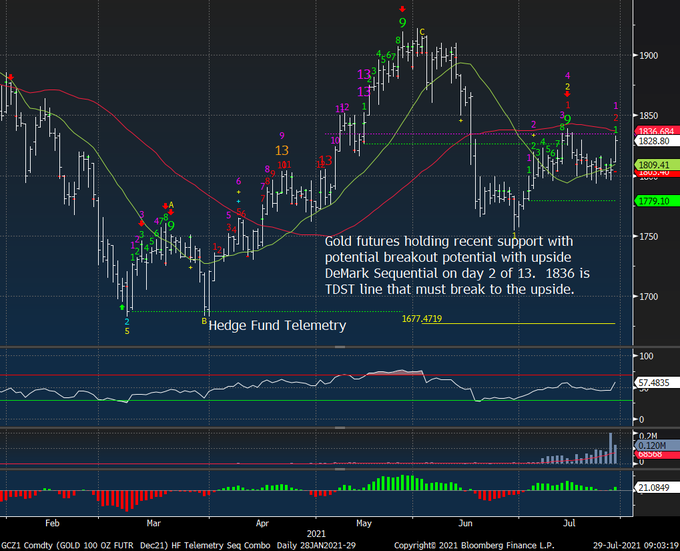 This week Jim Cramer featured the stock ideas of Bob Lang of Explosive Options in his Off the Charts segment. We recall an earlier such segment in which Cramer discussed the Semiconductor  recommendations of Bob Lang. Any one who bought AMAT and/or LRCX after that segment is probably very happy now. So we were curious to see the new calls of Bob Lang – Starbucks, McDonalds & Yum Brands. It is a clip that should be watched.

Starbucks is a heavy favorite with CNBC Anchors & their shows. They can’t stop talking about it as the stock to buy. Guess that is the Peter Lynch phenomenon. All these rich anchors buy Starbucks coffee & adore it, perhaps because it costs over $5 a cup, an elite product that the elites love & can’t stop talking about. And it is popular in China, a country they admire. So its a perfect come together of elitism.

We are simple folks & have never bought a Starbucks coffee. We love coffee but the simple instant kind. That is also true of food & of the food stock we like. The elite-seeking crowd we know despises this simple food offering. But the stock of our non-elite food has wiped out the stock of Starbucks both this year and over several years. Look at the evidence if you don’t believe us:

And this past March gave us all a terrific opportunity to get DPZ on the cheap between 320-350 (closed on Friday at $525).

This week we found out that Bill Ackman actually swapped his Starbucks holdings to buy Domino’s around $330. The clip below explains why he did so far better than we could.

Allow us to add something Mr. Ackman did not mention. One mega trend we see is the long term secular increase in incomes of ordinary Indians in smaller urban towns all over India in addition to the big metros.

And Domino’s Pizza is the best play on this mega trend. Not only is their delivery system just as good as it is here but you find Indian families stopping in to have dinner at the locations as they pass by. And unlike McDonald’s, Domino’s is purely vegetarian. So their stores can be located anywhere, even near temples.

Finally, how good has DPZ been as a growth stock & not merely a restaurant stock? See the 10-year comparison between DPZ & GOOGL:

While many emerging markets got hit this week, the Indian stock market was flat to up. And Mark Moebius said on BTV that India was their largest allocation. One of our favorite plays on secular rise in Indian incomes has been private Indian banks like ICICI (IBN) & HDFC (HDB).

Now compare the 1-year, 2-year, 5-year & 10-year charts of DPZ (Domino’s) to those of IBN to see why we consider DPZ to be a premier secular play on rising Indian Incomes.

We are really interested in the etymology of the name “Pisani”, as we have written before. It is the only non-Sindhi “ani” ending name we know while we know at least 15-20 “ani”-ending names from Sindh (now inside Napakistan).

Look what we found this week while reading some commentary from Harvard about the Great Epic Mahaa-Bhaarat or the first known world war. Factually about 3.1 million soldiers died in that 18-day war  and two generations of Kings & Princes died in that war that involved the entire known world of that time (from today’s Iran to today’s Xinjiang to today’s Sichuan (in China) to Southeast Asia & all of the entire northern Indian Subcontinent). There is no epic of this size & greatness anywhere as even the worst Hindu haters have written.

We found a reference to an Italian Professor named Vittore Pisani & his book “Rise of the Mahaa-Bhaarat”. We intend to see if we can contact him and learn some about the Pisani heritage. Who knows, we may find that the world is kinda one after all.