Remember the stunning call by Jeffrey Gundlach on CNBC Half Time on Friday, October 22:

Stunning as it might sound, for the entire week CNBC Half Time Show & its “investment committee” completely ignored this totally out of consensus call made on their air time.

But the Treasury market listened. And Treasury rates acted:

And that is not the biggest surprise of all – the 30-yr yield INVERTED vs. the 20-year yield on both Thursday & Friday. Granted, it is a mere 4 bps inversion. But still the 30-year yield is the most sensitive measure of future inflation. So when it inverts (closes lower) than the rate of a shorter maturity, it sounds an alert of not just lower inflation but lower inflation PLUS lower growth.

And that lower growth signal may not be merely a U.S. one. The German 30-year Bund yield FELL by 10 bps while the German 2-year yield ROSE by 6 bps, a 16-bps flattening on the week.

But the 6 bps rally in German 2-year was nothing compared to the explosion in 2-year yields across weaker European economies and Australia. PIGS 2011 redux? 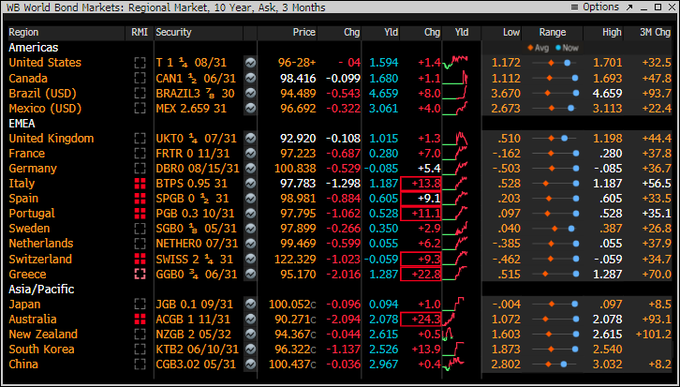 Now look at the 3 bps rise in U.S. 2-year rates & marvel. CNBC Half Time show seemed completely oblivious to this and its host Wapner kept reiterating the crap from the huge speculators who are demanding hawkishness pronto.

They & the Fed heralds keep telling us that tapering is NOT tightening. But even host Wapner agrees that tapering would reduce buying from the Fed even though he keeps telling viewers the Fed will still be adding liquidity for months. Guess he is satisfied with the amount of liquidity in the Treasury system. Strange given  what happened to Treasury liquidity this week: 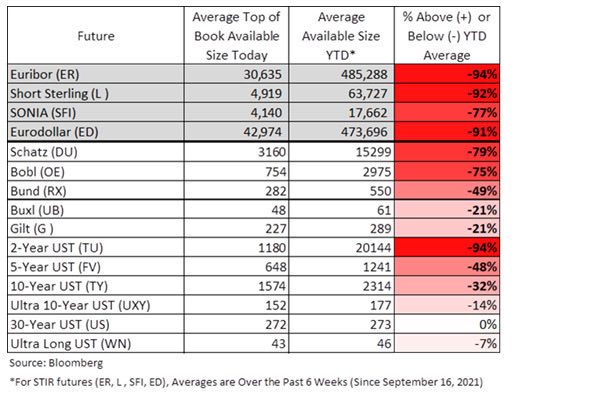 And in the midst of this, Fed Chairman Powell is expected to announce a taper of Fed buying (meaning reduction of market liquidity) and speak hawkishly about a rise in rates next year!

If that is not all, the Fed has consistently & silently tried to keep the Dollar down in the past. After all, to use the words of Larry McDonald, a strong Dollar is a wrecking ball for the world. 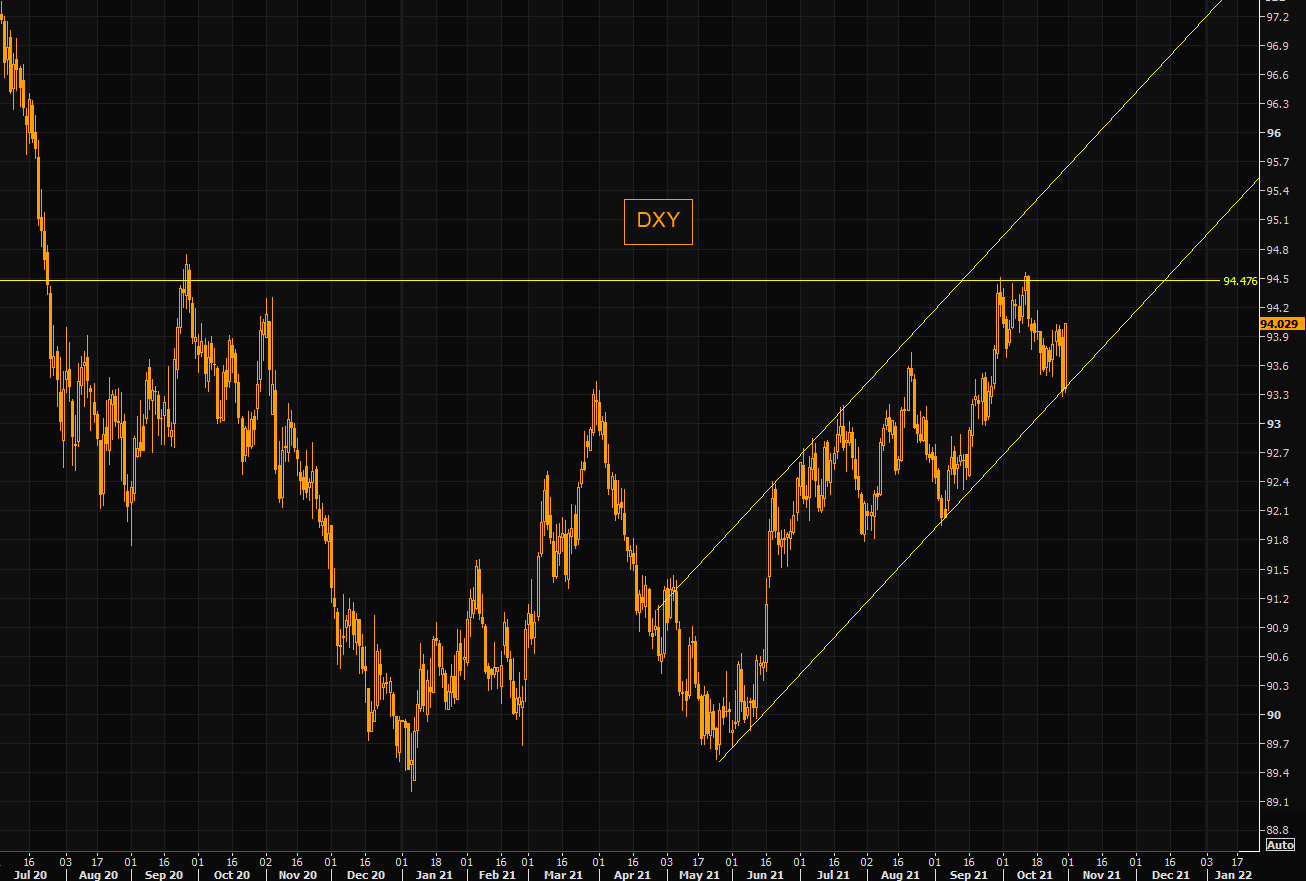 Normally with all this and a 91% drop in Eurodollar liquidity this week, we would argue that Chairman Powell is likely to surprise with a less hawkish statement. But a couple of things make us wary of assuming common sense & focus on market stability:

So all we are going to do today is merely point out what a big week we face next week:

Remember how the elites were thinking at the beginning of October 1? Read what Andrew Ross Sorkin, the elite of CNBC elites, said on October 1 to strategist Anastasia Amoroso:

What did VIX do over the month of October?

Kudos to Ms. Amoroso for that call. Any one who followed her gutsy call presumably did very well with the collapse of the VIX & the rally in S&P in October.

This final week was a merry one indeed for the big indices with Dow up 40 bps, S&P up 1.3% and NDX up 3.2%. Wait a minute. How could the NDX be up 3.2% & beat the S&P so badly this week given FinTV’s trumpeting of  Götterdämmerung or Twilight of the Big tech Gods on Friday?

That gets cleared up when you notice that Apple & Amazon were both UP for the week, Apple up 88 bps and Amazon up 1.2%.  The only way this is twilight of AA Gods is in comparison to the brilliant noon of MA Gods with Microsoft up 7.4% & Alphabet up 7.1% on the week. Add 6.5% for Netflix and you got to admit this all looks like MANAA from stock market heaven to simple folks who have believed.

What might lie ahead for true believers in seasonality?

Aren’t we taught that true believers are the ones who get to heaven? And markets provide true believers something that no theosophical religion provides – Puts. Or a marriage of puts with stocks to protect the downside while believing in the upside. And puts seem to be cheap with VIX around 16.

Does that require a positive sounding comment that is actually signaling negativism? 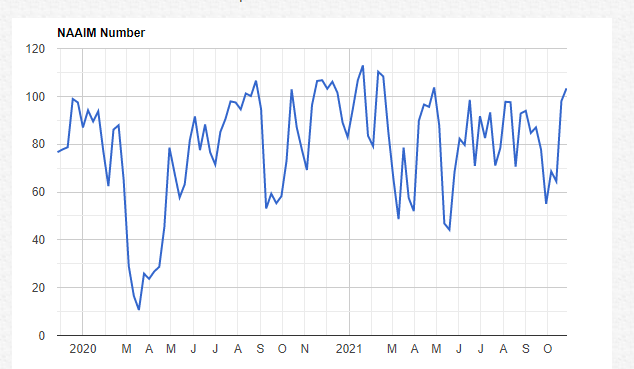 But does history suggest that crossing 100 is actually a bullish sign? According to the below, the S&P rose 16/17 times over the next 5 weeks after that sign: 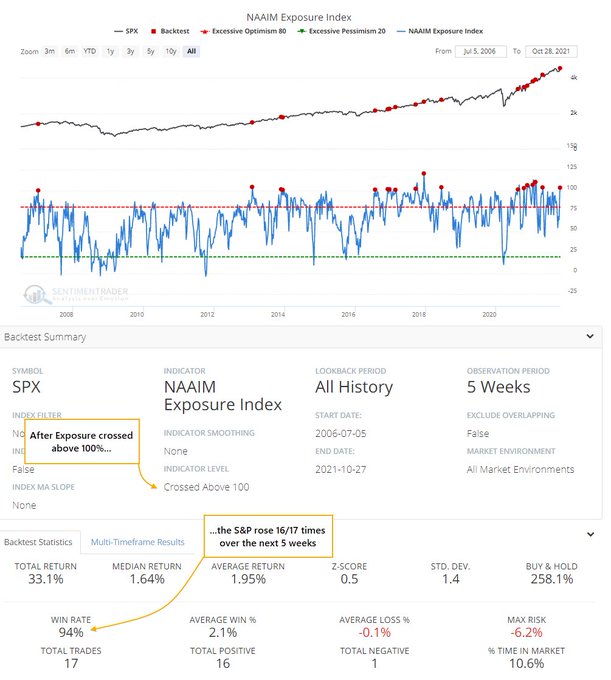 This week wasn’t merely sweet for indices. The S&P 500 Advance/Decline line hit a new high this past week. What does that suggest for true believers? 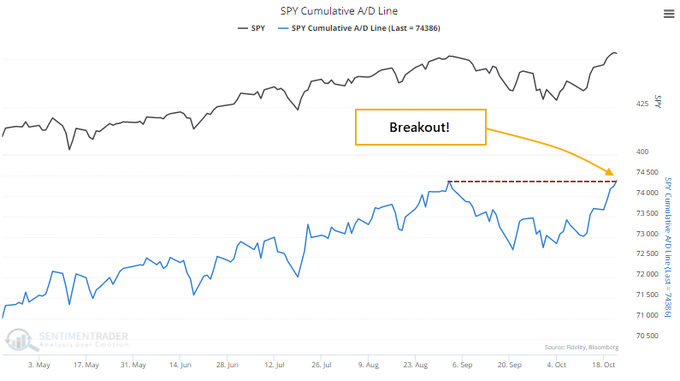 But probability is not certainty, especially with a wounded Chairman Powell on deck and with