Look what happened on Friday, the day Fin TV was all agog about Treasury rates screaming higher,

What gives? Aren’t rising Treasury rates a negative for tech stocks, especially high-PE tech stocks? Is the correction over already? 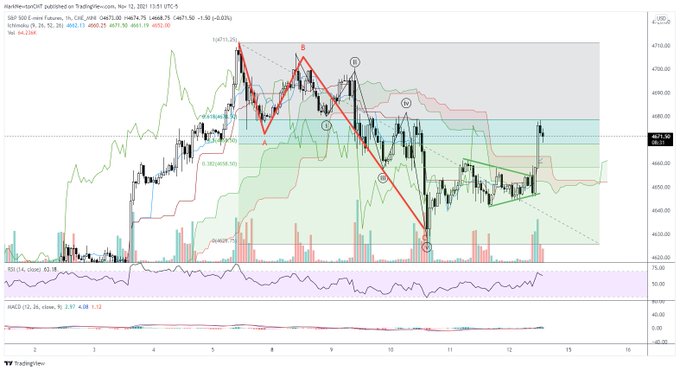 Or are the festive days here again per the chart below from The Market Ear? 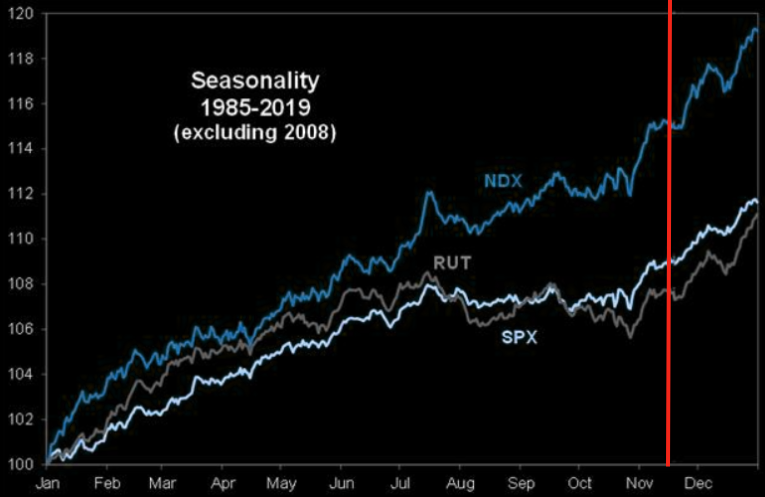 In a bit more detail, 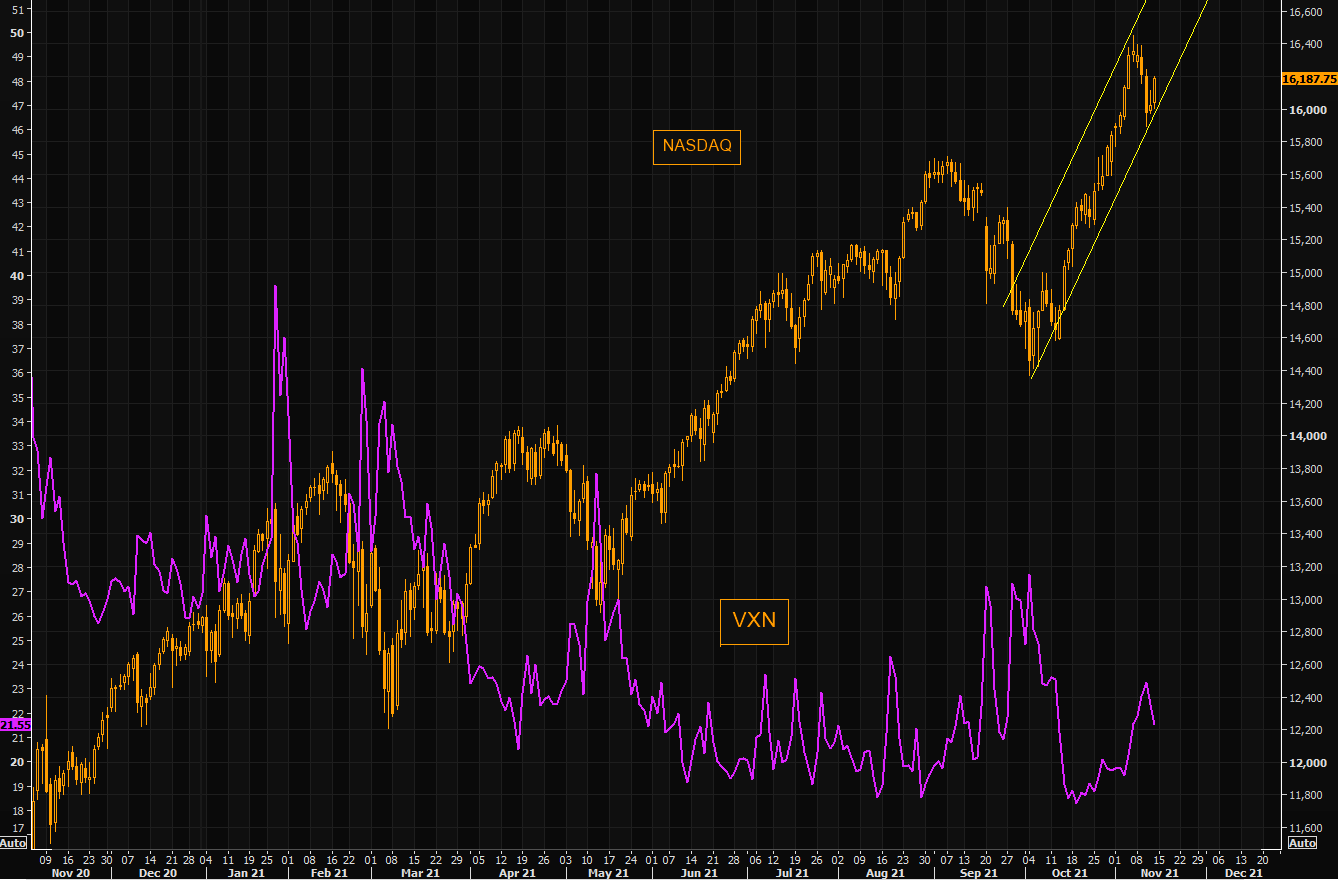 But is there something “techy” that is actually oversold & has been building a base for the past few months?

Ok, but is there fuel for a liftoff? 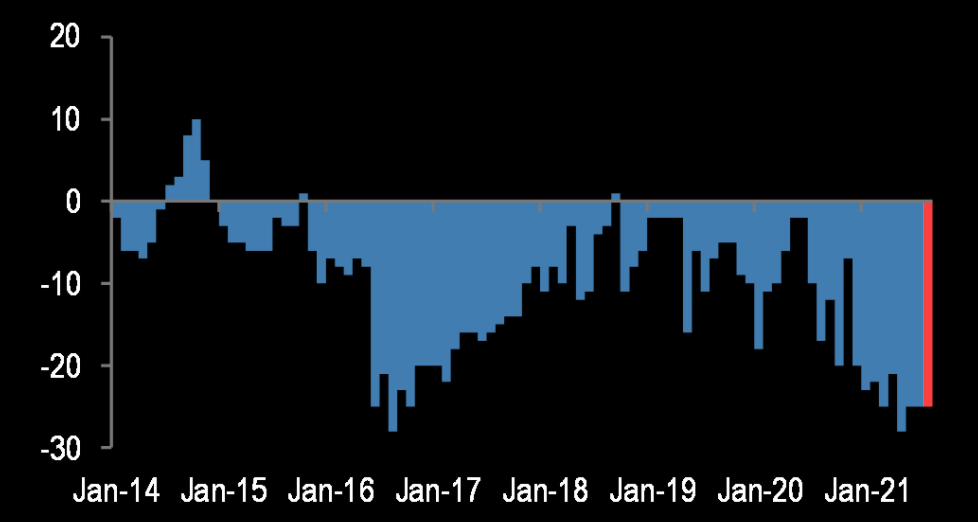 But is there a catalyst? What about the upcoming “jaw-jaw better than war-war” video summit between Presidents Biden & Xi? Will a reduction in US-China tensions act as a catalyst for this group?

How hot was the CPI report this week? So hot that David Rosenberg termed it as “super-hot”.

Man, the 30-year yield must have rocketed up! Yes it was up nearly 10 bps on Nov 10, CPI Day. Actually, it had fallen after rising after the 8:30 am CPI report. The big fast up move happened after the awful 30-year Treasury auction per LA (sorry, but writing Lisa Abramowicz so often is too tiring for our not-so-fat fingers): 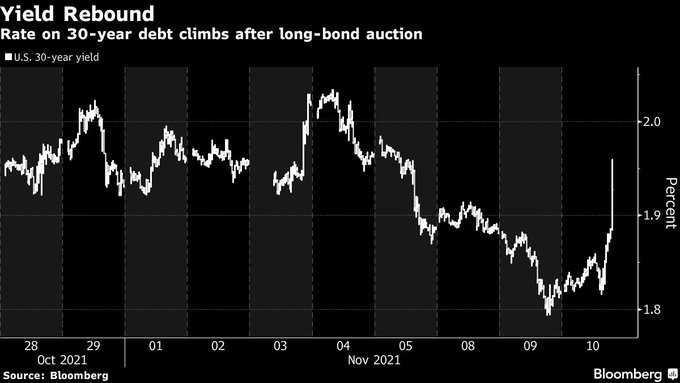 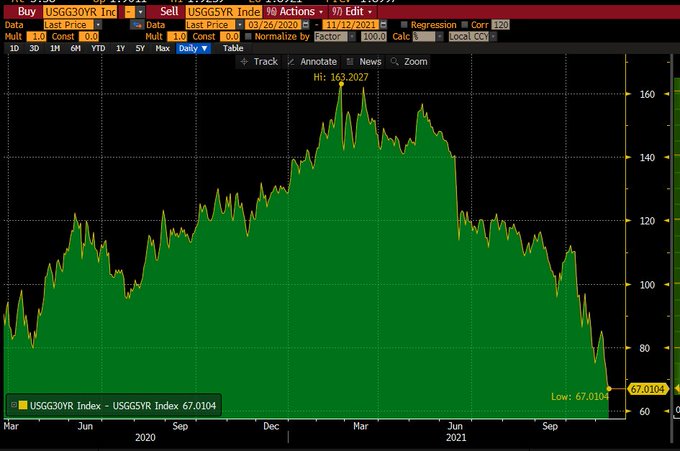 Once again, the front end of the bond market is calling what it thinks is Fed’s bluff, to use the Priya Misra term. Did the Fed buckle in two of the previous high inflation occasions?

If that is true, shouldn’t they buying the long end of the Treasury curve? 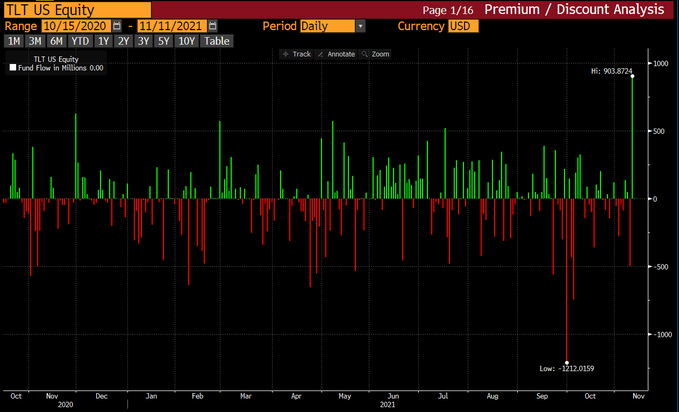 Guess Ms. LA can say & tweet so because she is at BTV. Would anyone at CNBC be free to utter such blasphemy? Not under the rigid quasi-religious orthodoxy of CNBC Half Time Report, its host Scott Wapner & his big-big-money controllers who are leading a destructive campaign against American middle class & our champion Jay Powell by demanding he raise rates now & through out 2022.

Are we being a tad unfair to Mr. Wapner & his backers? Perhaps or even probably so. But we confess it is a lot of fun. We have always been against orthodoxy (be it Sorkin’s BrIndian Brahminisim or Wapner’s head-long “damn the middle class” campaign). So, while we don’t have the power to change it, we can at least laugh at it.

Unfortunately for Chairman Powell, the “super-hot” CPI report came a week after the November FOMC meeting & his presser. So he looks bad or too timid despite having delivered a terrific performance in his statement & presser the week before. In contrast, the December 15 FOMC meeting comes AFTER all the release of all critical economic data – Non Farm Payroll on December 3, CPI on December 10 & PPI on December 14.

If that data even slightly creates the possibility of “crescendoing” of inflation pressures (using the Gundlach construct), then he & more importantly the American middle class get lucky. But if he gives in even an inch to the barbarian hordes, then his reputation will be tarred and Biden & Co. will turn on him.

The reality is that much of this inflation is the consequence of Biden-team policies. When you shut down energy pipelines, when you rail against oil drilling, you create commodity shortages & inflation spikes. Now even in France the people are far angrier against high gas prices & low availability than they are against global warming. Tensions are ratcheting up in Eastern Europe with Belarus threatening to shut off gas to Europe & US-Russian troop movements are increasing on the Ukraine border.

That doesn’t even address the real inflation crisis, the onset of which has been evident since 2021 began – Food prices: 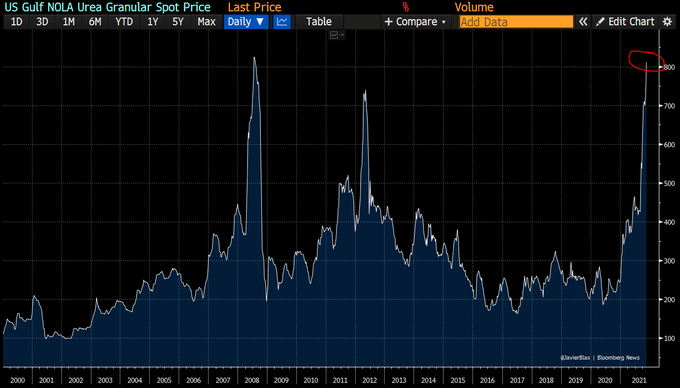 What tools does the Fed have to increase oil supply or food supply? Zilch.  So by what earthly logic does the Fed need to raise interest rates & raise cost of credit on the American economy?

We recall the pressure on Chairman Ben Bernanke in early 2007 to get hawkish. He did & a few months later Cramer let loose his “they know nothing” tirade. We see a similar dynamic in that the American middle class & lower middle class is already suffering. That is being seen in the underlying trends of the US economy.

The biggest task before this Fed, in our opinion, is to protect against the downward trajectory of American net disposable incomes & consumer spending. And the Treasury market is screaming this message by its relentless flattening of the 30yr-5yr spread.

How do Treasury yields behave from Monday, November 15 to the December 15 FOMC? How do they react to the incoming economic data before the FOMC meeting? That is what we will be watching.

A few weeks ago some one (Collins of PGIM perhaps?) said on BTV Real Yield that the Fed Funds Rate will stay at ZERO during this entire cycle meaning the next recession will occur before the Fed raises the Fed Funds rate. That seemed a little nuts even to us. Then this week, we saw someone come from a so far hawkish mindset to utter the same sacrilege (why isn’t this smart guy on Fin TV literally every week?):

We think Chairman Powell understands this. Remember the great Flood of about 10,000 years ago. Today we have a huge debt mountain in the world, a mountain that is $30 Trillion higher than it was the last time Fed hiked. Chairman Powell does not want to trigger the melting of this gigantic mountain. That may release the Flood that washes away the global Central Bank edifice.

Frankly, the multi-billionaire crowd that controls Wapner’s mind understands this. After all, they have all made mega-monies when dangerous Fed rate hikes create turmoil in high yield credit & stocks. They want to see corporate credit blow up & stocks get torched so that can get in & buy cheap, very cheap.

Can Chairman Powell resist this intense pressure or will he finally give in at just the wrong moment? That may set us up not only for the Santa Claus rally but for a turbulent 2022. 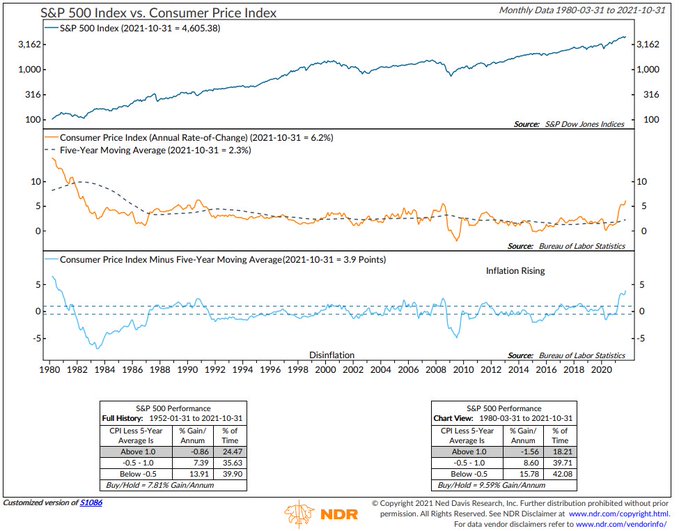 We are once again close to 4700 on the S&P. Do we get to 4800 before the Dec 15 meeting or do we sell off first & then have a Santa Claus rally to close this great year? Many are in the 2nd camp including,

Why such a title? 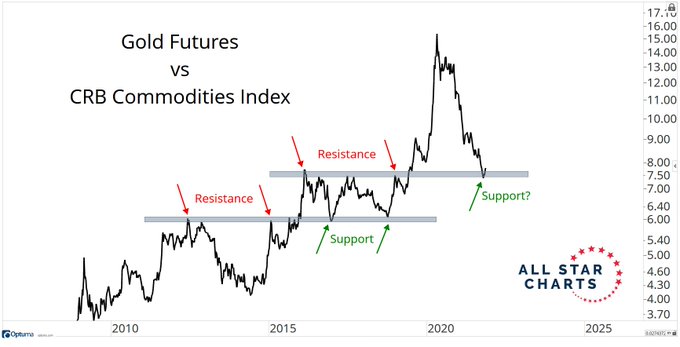 But is Gold about to beat bonds too? It certainly did so this week with Gold up 2.7% and 10-yr note futures down. 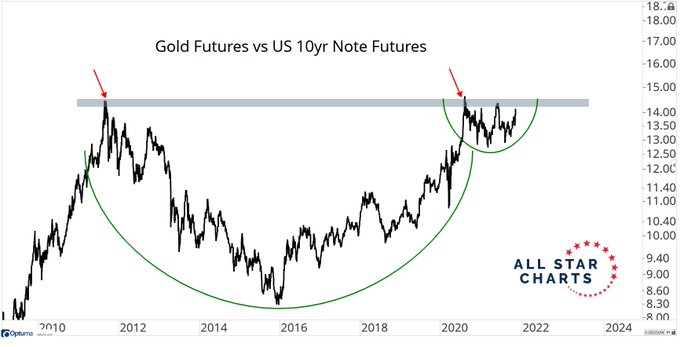 Will Gold also beat this year’s champion? Again it is so this week with Gold up 2.7% vs S&P down 32 bps. 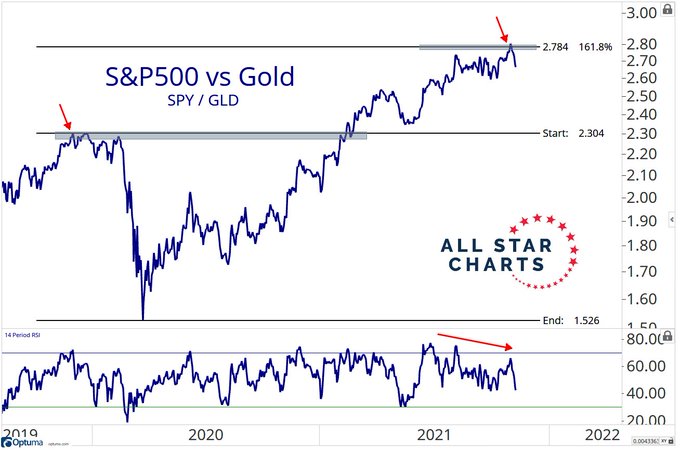 If Gold does so, then Gold Miners will too? 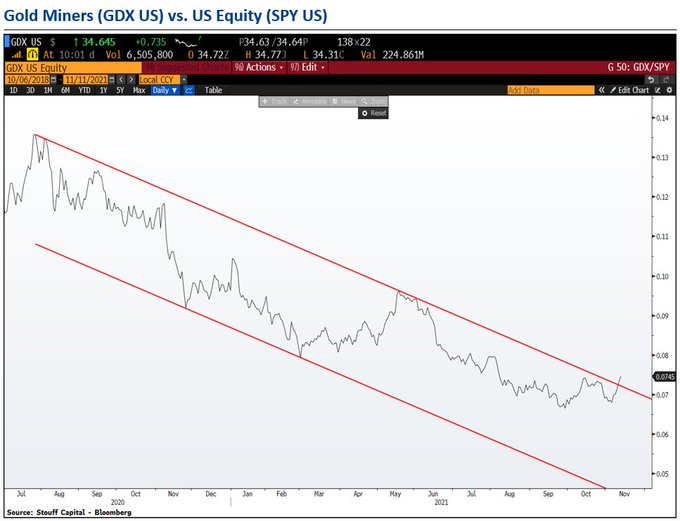 Then can Silver be far behind? After all, Silver was up 4.7% for the week. 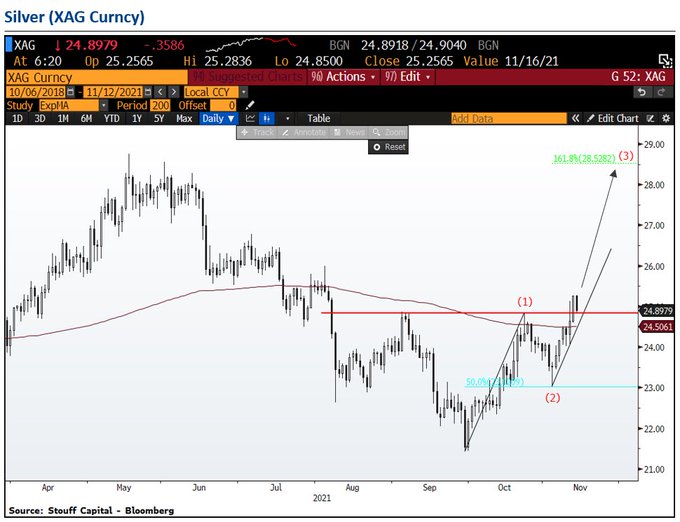 One star among metal stocks was Freeport (FCX), up 12% on the week. Could below be one reason? 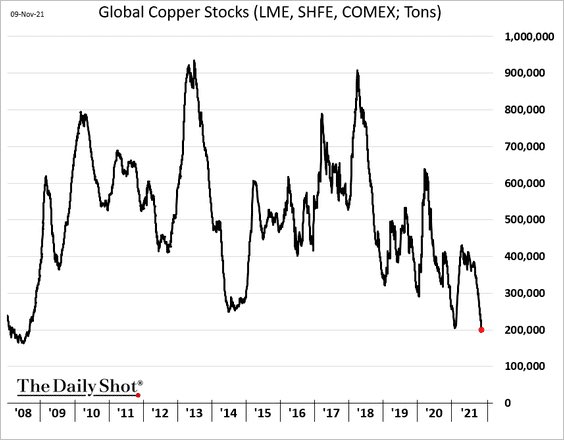 Speaking of gold, how can we resist the temptation to include a song spoofing gold & its attraction for women?

Apart from a kinda ho-hum spoof, the real gold in the above clip is Katrina Kaif. Why does Katrina rank a mention in an investment clip? Because Katrina launched the Kay Beauty brand & served as its sole brand ambassador.

What is so timely about one brand? Because Kay Beauty is 50% owned by Katrina Kaif & 50% by Nykaa, the beauty-related company that was formed in 2012 by Ms. Falguni Nayar.

Nykaa went public in India this past week in a stellar IPO that doubled on the first day with a $13 billion valuation. Ms. Nayar owns 50% of Nykaa making her one of the twenty richest Indians. Not bad for an ex-investment banker who left that business of taking other companies public to start her own company. 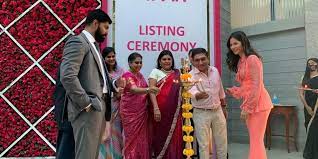 Not so bad for a British actress born in Hong Kong as Katrina Turquotte who moved to India to begin a modelling career. She entered Bollywood without being able to speak Hindi (the language of Bollywood films). Laughed at & mocked initially, she became one of the top superstars of Bollywood and now a successful brand manager & investor.

How does a British young woman, born & grown up in Hong Kong, play a gorgeous come-on village girl with an explicit message in a 100% rustic Indian setting? See for yourselves. You don’t need to understand the words (even though they are terrific) to get the message she conveys:

Her come-on line “yeh to trailer hai, puri film dikhane aai” or “this is just a preview, I come to show [you] the whole picture” is now a cult line in Hindi, even business Hindi.

As we said, not bad for a young British-HK woman who came to India in her twenties without knowing any Hindi & without any film experience. Not surprising because India has been the land of immigrants since about 1500 BCE & perhaps even earlier. Perhaps a reason why Indians have little trouble blending & succeeding in America?