Remember the protests by North Indian Farmers against the new farming laws passed by the Indian Government in September 2020? It was a major visual event. And one that brought out the entire phalanx of Hindu haters in US & Global Media. The Indian People, while broadly sympathetic towards farmers, saw through the vicious anti-India nature of these global protestors & supported Prime Minister Modi. Also the farmers in the 23 other Indian states did not support the farmers lobby in the 3 protesting states in Northwest India.

With that backdrop, look what happened on this Friday, November 19!

Prime Minister Modi announced that they had decided to repeal the three farm laws passed in September 2020. The key statement in his short speech to the Indian People was:

Meaning it was his fault that he was not able to explain the benefits to the small & medium sized farmers of the new farm laws. And so, in view of his failing & in deference to the fears of the farmers, his party had decided to repeal the new farm laws.

That, in our opinion, was absolutely true. The new farm laws changed the current mandated food purchasing system to a new de-regulated system in which buyers, corporations included, could directly purchase food from farmers instead of being forced to go through the current middlemen system. The trouble was that the change was too abrupt & too potentially destabilizing.

We were not surprised at this reversal by PM Modi.  He is an exceedingly astute man who is aware of the serious danger that the world, especially the developing world, faces in 2022. And his government was already taking steps to help out neighbors like Sri Lanka, as Geopolitical Futures had reported in their Daily Memo on November 10, 2021:

Given this reality, it was very smart to earn the emotional support & loyalty of northwestern farmers by repealing the new farm laws & apologizing to them. This act of repeal also puts him in an excellent position to increase monetary aid to farmers in early 2022, four-five months ahead of the crucial midterm elections in these northwestern states.

Just like the Covid outbreak in April-May 2021, the fertilizer shortage is global & almost forced on not just India but on the entire developing world. As with Covid, the biggest risk, according to Geopolitical Futures is “panic-induced inflation in food prices” in China. Broadly speaking, they write:

The fears of political unrest go back to the Arab Spring of 2011 when riots spread because of food prices. Like then, the real pain was felt in emerging markets both due to their financial difficulties & because their weak currencies doubled the impact on food prices they had to import: 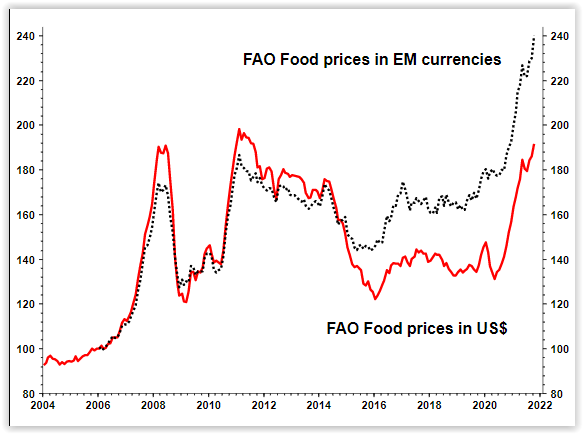 The impact on America may not be as potentially scary as that on EM countries. But it is serious enough as discussed by Geopolitical Futures in their November 16 article Fertilizers and Food Insecurity:

Are such high food prices good for farmers? Not really, explains the article:

So what is the U.S. Government doing?

If political costs of food pricing are high in America, how much higher are they in Northwest India, the food belt of India? So we view this week’s repeal of unpopular farm laws as a battle signal from Prime Minister Modi to help farmers in the key election states & reduce food costs for Indian consumers.

The one positive is that fertilizer stocks have fallen by about 15% in the last few weeks from their peak in late October:

But what if we get a repeat of 2011 or, God forbid, if we get what anything close to what we saw in 2007-2008 due to the rapacious appetite of China & Emerging markets?

Now wouldn’t that bring about Global Warming & Climate Change in the World, the political world that is?