Most of us saw what happened on past Sunday late afternoon. For those who didn’t or don’t remember, here it is:

The above was the 3rd phase of the game. The first phase was a romp by Tom Brady & Tampa Bay; the second phase was a poor performance by Tom Brady & Tampa Bay enabling the Bills to tie the game. It was as if a completely different Brady was revealed in that 2nd half. And this was no ordinary game. As Tom Brady himself admitted, the game against the Bills was the most important game of the rest of the year.

Then Brady got the chance to score when he got the ball in overtime. The game was on the line on that 3rd & 3 play, the play of the game as CBS analyst Tony Romo said. Watch the above clip from 0:40 to 0:50 & notice that Brady froze out & misdirected Bills No. 49, Trumaine Edmunds, into taking a wrong step. That was enough for Perriman to separate, catch the pass in stride & run for the game-winning touchdown.

Think about it & you will see Chairman Jay Powell did precisely that on Wednesday in his presser. We all saw a positive winning Powell in his first phase. We actually featured him in our Diwali article in early November. Then a completely different Powell was revealed via Fed minutes on Wednesday before Thanksgiving. That Powell was confirmed & emphasized by his creating the meltdown the following week in his Congressional testimony.

Think, what was the monetary policy equivalent of the thrashing Bills administered to Tom Brady & Tampa Bay in the 2nd half to tie the game? It was the 3-week brutal flattening of the Treasury curve with the 2-5 year yields going up & the 30-10 yr yields falling in fright of a major blunder by Powell.

Then came the day of the December FOMC meeting, Wednesday, December 15. It was the most important FOMC meeting of the year with comparisons with 2018 Powell running all over Fin Media. The FOMC statement was true to the Hyde-Powell revelation. But as we see now, that was a misdirection & a freezing of the bad guys.

Because when Powell began his presser, it was the beginning of the winning play of the game. And the markets, like us, were shouting Go JP Go as the presser went on, the monetary equivalent of Run BP Run shouts from Bucs & their fans in the clip above.

The Bills team in this case (with apology to Bills fans & especially Bond King Gundlach) was the flattening of the Yield Curve. And that was trounced by Jay Powell just as speedily & as decisively as Tom Brady had trounced the Bills.

Yes, in that presser, Powell achieved his goal, a goal emphasized by the line “Powell: FOMC Rate projections don’t represent a plan on BTV screen”. The 30-2 curve steepened fast & hard during his presser & that continued the day after as well.

But are we just being fanciful? Was there any one who actually noticed what we were clapping for during the presser? Read what Jeffrey Rosenberg of BlackRock said on BTV Surveillance Fed Special after the Powell presser (from 2:07:37 of the clip):

How did the yield curve theorem act the next day, Thursday December 16?

A more than 10-bops steepening of the 30–3 yr Treasury curve. Happy Days are here again was our reaction. But Jeffrey Rosenberg was more prosaic after the presser on Wednesday:

That is a heck of a conclusion from Jeffrey Rosenberg, one that very very few on Fin TV will concur with even now, two days after the Fed.

Finally, what might the Fed’s political masters be thinking of this financial stability over inflation preference? Watch the conversation between Brian Deese, National Economic Council Director, with CNBC’s Sara Eisen on Friday, December 10 & notice that, in the latter half of that conversation, Deese himself characterizes inflation in somewhat of a past tense. That suggests to us that Biden-Dems have decided they cannot risk a stock market debacle because of a policy mistake by a Biden re-nominated Fed Chairman.

2. Mistake the Fed was about to make

Recall that we & some others have been using the descriptive term “bond market screaming in terror” for the intense flattening of the yield curve in response to Powell’s rhetoric.

Why was the Treasury market screaming? The best line came on Friday from ECRI’s Lakshman Achuthan who said that the Fed was “tapering & tightening into the teeth of a sustained cyclical slowdown“. Watch & listen to this really simple & straightforward amplification:

Achuthan made a couple of more important points that CNBC, in their unique wisdom, seem to have deleted from the clip below. He pointed out that the tension today stems from a conflict between a cyclical upturn in inflation that is happening coincidentally with a cyclical slowdown in growth. He added that he means cyclical inflation upswing not structural inflation and states that the pace of increase in inflation is topping out. He also pointed that this is happening in the backdrop of a global slowdown with China & Europe and the global industrial cycle (forward indicator) isn’t showing a bottom.

Now you understand why the Treasury market was screaming in terror of what the Fed might launch?

And let us not forget that mountain of low-coupon debt that is the world is bearing. We have said before that we think the Fed may be on the verge of a big mistake a la 2007. But there is a stark & dangerous difference between now & 2007:

So what is the big difference? 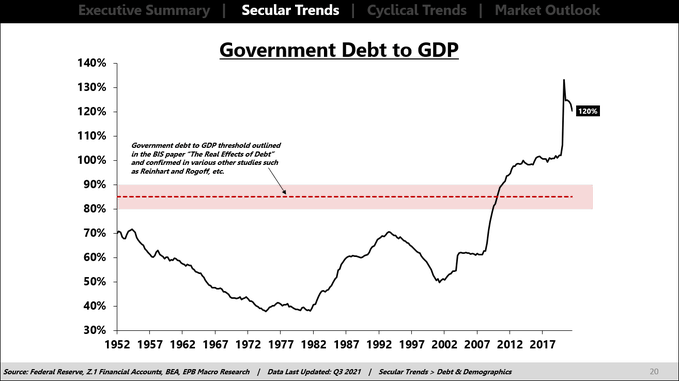 How are we going to deal with this ginormous level of Government Debt? Find another galaxy with a much bigger bond market where we can refinance our earthly government debt at a lower coupon? Barring that it will keep acting as a pull down of real economic growth here on earth. So forget about raising rates big time?

Wait a minute! Wasn’t there another time this was the case? We were not around then, but fortunately some one brought that case up in the minutes before the Powell presser began. That some one is Scott Minerd of Guggenheim and this is what he said on the BTV Surveillance Fed Special on Wednesday, December 15 afternoon::

Now you see why people like David Bailin of Citi Private Wealth are telling us to expect real interest rates to be negative for the next decade?

That & the general oversold condition prompted Tony Dwyer to suggest that we are “closer to the end of the correction” and the “correction is due for a bounce“. He pointed out that Russell 2000 is as oversold as it gets & may be that’s why Russell 2000 was up 1% on Friday. He also pointed out that the advance/decline in the Nasdaq is back to October 20 levels. His opening point was when they come for the defensive leaders (MANAA), that suggests it is probably the end of the correction rather than the beginning. Watch for yourselves:

A stronger message below: 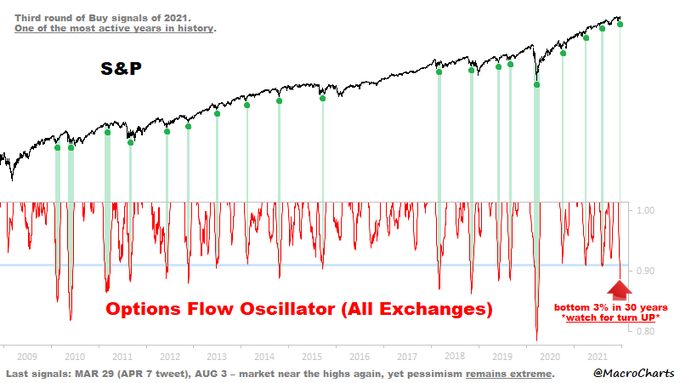 Apparently there are lots of people who jump aboard a derailed train: 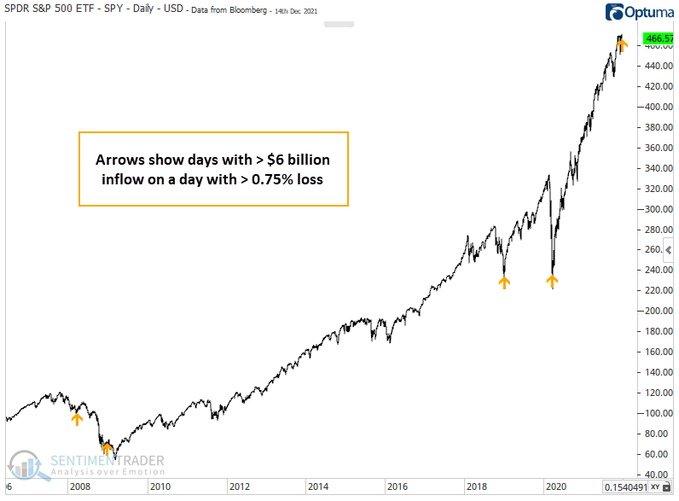 We heard a comment from Jim Cramer this week about something Kelly McGillis said to Harrison Ford in the film Witness. We don’t recall the specific comment but it triggered the association with the film Paap. Witness, as most know, is a male-oriented film about a Police Detective sheltering a young boy & his mother from other rogue cops in his own precinct. He takes the boy & his mother back to their Amish area to hide. The rogue cops come, two die in the shooting & the boss surrenders. The detective goes back to the city.

How can this fast male-oriented film be transformed into a tender female-oriented film about a young girl who has just begun to blossom into a woman? Enter filmmaker Pooja Bhatt & the result is Paap (Sin). Change the story slightly by making the young woman a caretaker of the young boy instead of his mother, a  young woman who is going to be a lifelong nun in a Buddhist monastery. Then keep every action scene exactly the same and you get Paap, a tender love story about a young woman who suddenly is forced to confront her romantic feelings about a man she is nursing.

The young woman is so brought up that she is not allowed to have a mirror & she ends up writing her thoughts in a book that she is forced to hide. The film introduces her in the beautiful clip below.

Remember how Rachel (Kelly McGillis) & Book (Harrison Ford) accept the feelings between them?

This was simply not possible for Kaayaa (the young woman)? So words were never said & feelings were always in dreams:

Remember the ending scene in Witness? That was natural for that story.

What about the ending of Paap? Does Kaayaa’s father force her into the monastery or does he accept it is wrong for him to impose that on Kaayaa? You don’t need subtitles for the clip below:

We have a tremendous respect for the art of filmmaking & the ability filmmakers have to tell a story from their own point of view. That is a reason for our pseudonym Cinema-Rasik, rasik means one who loves the essence of what one looks at.

All this from an offhand comment from Cramer! So if you found this section even a tiny bit interesting, thank Cramer. If not, blame us for wasting your time.