Think back to the last couple of years of the Obama Administration when antipathy to Russia almost forced Russia to consider an alliance-type relationship with China. While that has happened to a certain, mainly visual, degree, we have generally been skeptical about the depth of the Russia-China relationship.

As strategists have taught for at least 2,300 years, neighbors really don’t make allies. And Russia-China have a 2,600 mile long border with a history of battles that involved gain-loss of boundary areas. Secondly, the disparity between China & Russia is widening at an alarming speed, as the world and both countries see. China today sees itself as a global power virtually on par with America while Russia, to President Xi, is at best a junior regional power. And we all know how President Xi treats junior powers in its orbit.

So we have been waiting for a visible signal from Putin to Xi, a signal that can be read by the entire World. Putin’s Russia has been sending a few early signals since the summer of 2020 but they could have been discounted as basic commerce. Now we have all seen the visible almost dramatic signal early this past month, a signal from Putin himself, a signal that sidelined even Lavrov, his veteran foreign minister.

While this process was developing for over a year, the catalyst for the timing, we believe was this past summer’s sudden & stunning exit of U.S. forces and the handover of Afghanistan to the Taleban.

1. Russia vs. or with China

Read what Elizabeth Wishnick, a professor & a Indo-Pacific research scientist wrote on November 8, 2021 in her article on War on the Rocks:

Peaks in Geopolitical relationships, like peaks in Macro Markets, are significant events, events that force analysts & participants to increase/decrease their exposures & future paths. So what suggests a “peak” in the China-Russia quasi-alliance and how do we measure the direction of this critical geo-strategic relationship?

Ms. Wsihnick addresses this in her article:

Take a look at the map below of the China-Russia border, especially the Central Asian region on the left where the new & increasing reach of China meets the existing influence of Russia. 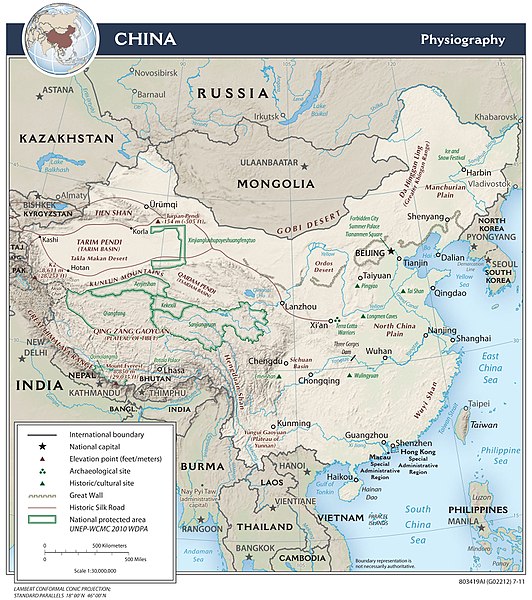 Notice that Russian influence in Central Asian states, Chinese Xinjiang, China’s entry into NaPak-occupied Kashmir & Indian outreach all meet in the land called Afghanistan. The American control of Afghanistan had kept this pot of regional influences dormant. Now it is beginning to stir.

This to Ms. Wsihnick is a real litmus test:

That was on November 8, 2021. Did Putin himself provide an answer in December?

Look back to May 2020 when Indian & Chinese forces fought in a skirmish in which 20 Indian soldiers & reportedly 40-45 Chinese soldiers died. As a result, tens of thousands of troops were mobilized & positioned across the Himalayan border with air forces & missile batteries activated.

At that time, Indian Defense Minister Rajnath Singh visited Moscow ostensibly to participate in the 75th anniversary of WWII victory. During that visit, Mr. Singh reportedly gave the Russians a list of 10 pieces of military equipment that India needed to fight the Chinese Army.  That was the time when President Trump & PM Modi had built a strong relationship & while Russia & China were partners.

Fast forward to December 2021 and see President Putin fly to Delhi to meet with Prime Minister Modi and sign a series of agreements. Note that Putin has not met Xi since the Covid outbreak. In fact, the only foreign trip of President Putin has been to meet President Biden in Geneva. 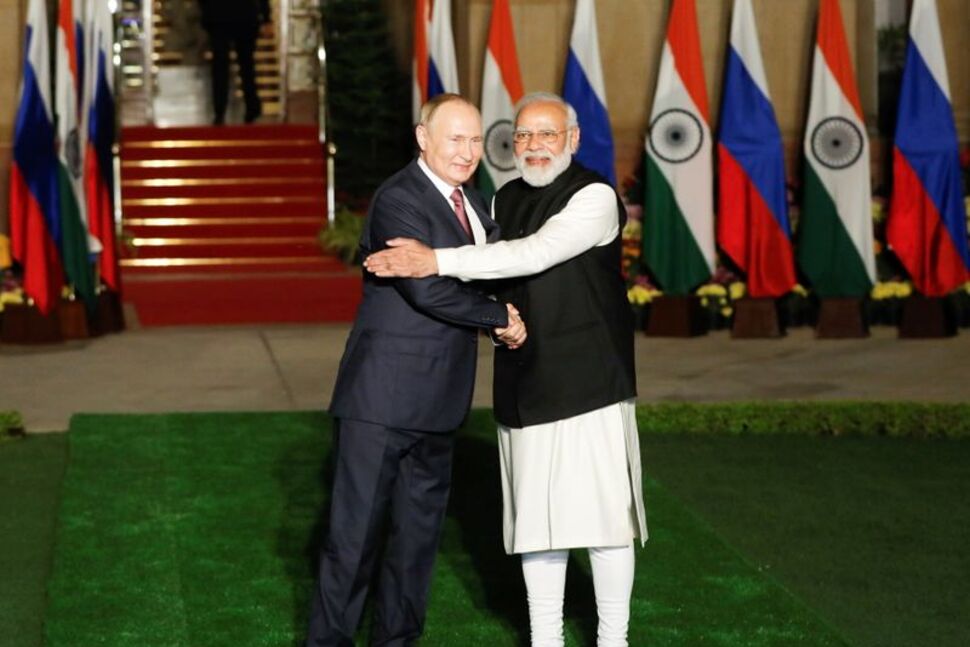 But these agreements could easily have been signed by Foreign Ministers Lavrov & JaiShanker. President Putin did not have to fly for that? So why did he?

One reason, according to Russian analysts who spoke off the record with veteran reporter Jyoti Malhotra, is that Putin wanted to meet Modi to understand for himself the direction in which India’s foreign policy was moving. She points out that the two foreign ministers, Lavrov & JaiShanker, have not been able to establish chemistry and that Lavrov & his team had been condescending towards India.

Malhotra argued in her article on December 6, 2021,

What about Xi? Malhotra writes:

Notice that, within days of Putin returning home, Prime Minister Modi Modi participated in a virtual Democracy Summit called by President Biden, to which neither Putin nor China’s president Xi Jinping were invited.

It shows that the world is becoming a more multi-lateral arena in 2022. India is a major partner of America in the big challenge ahead from China. At the same time, India is signaling that it remains a partner of Russia in keeping Chinese influence from spreading in Central Asia. And that begins in Afghanistan & more importantly in NaPakistan.

Speaking of terrorism-friendly NaPakistan, remember the ethno-linguistic map of that “land of the spiritually pure“? 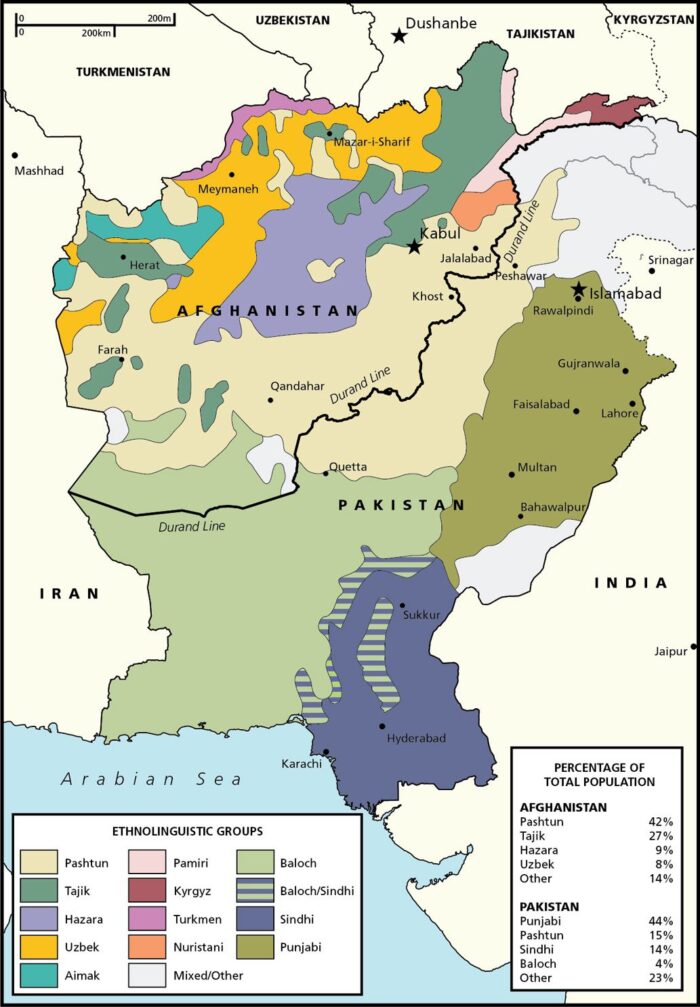 The “Pashtun” section in yellow shows clearly how the British partitioned Pashtun territory into two parts by creating an artificial border called the Durand Line. When they went away, the British left behind the Durand line as the “border” between today’s NaPakistan & today’s Afghanistan. NaPakistan never respected this “border” & kept infiltrating fighters into Afghanistan, first to fight the Soviet occupation and then the American occupation.

For their part, no Afghan government has accepted the Durand line as their border with NaPakistan. And the Taleban demonstrated this week that they also do NOT accept the Durand line as the border of their state of Afghanistan. And that they intend to keep going back and forth between today’s Afghanistan & the Pashtun areas occupied by today’s NaPakistan.

The videoclip below shows that the Taliban fighters dismantled the fencing put up by Napaki forces to demarcate the Durand line. This actually led to a skirmish with Napaki forces. Guess the Taleban might have been created & nurtured by the Napaki military but they have been Pashtun nationalists first.

Now go back about five weeks to the regional conference of National Security Advisors organized by India to discuss the situation in Afghanistan:

Notice who is missing? The NSAs of China & NaPakistan! The Taliban leadership was NOT invited because India does not recognize the Taliban. So the Taliban must have been livid, right? Guess again & watch the clip below.

Specifically read the statement about this conference from Zabihullah Mujahid, Taliban Spokesperson:

“On its own” meaning NaPakistan stay away & China don’t exploit our mineral resources? How will the Biden administration act? Will they stay away & leave it to Afghanistan’s neighbors or will they get tempted to re-enter in a new war against terror in Afghanistan by re-funding old friends in the NaPakistani military? Who knows?

The real message might be that the story of the aftermath of US withdrawal from Afghanistan is merely beginning to be written.

The above was an exercise in positive thinking about the future. Now to today’s stark reality. A reality that America has forgotten about the lesson from the great FDR. It was the smart pragmatic & cold realistic genius of President Delano Roosevelt that won World War II against the enormous might of Nazi Germany.

FDR had no illusions about Stalin & his Russia. But he understood that Stalin was the smaller enemy while Hitler was the Big Enemy. A battle with Stalin was not existential for US supremacy but the war against Hitler was. Had Hitler won, America would have been cast out of Europe & could possibly have lost the Atlantic Ocean to Germany. Compared to this, the challenge from Stalin was trivial. FDR also understood that having Stalin’s Russia fight a battle against Hitler’s Germany was a huge blessing for America. That is why FDR sent all supplies & war material Stalin needed.

FDR’s party is in power now but there is no sign of FDR. Actually there is every sign that FDR’s successors among Biden-Dems are the complete opposite of FDR.

America’s existential battle today is against China, a true global superpower in the making. If China succeeds, America will be cast out of the Southern Pacific Ocean & instantly become a 2nd-rate power. The entire thriving ASEAN region will become a Chinese vassal state & its reach will extend across to Middle East as well. Compared to this, Putin’s Russia is not even a second-rate issue. So it is an unbelievable level of asinine folly to threaten a war against Putin’s Russia.

Strategic Ambiguity has been a core principle of U.S. foreign policy. It prevents a small state from forcing America to fight a war for that state. This principle continues to be used today in the case of Taiwan. But now Biden-Dems are close to jettisoning this ambiguity on behalf of a corrupt Ukrainian regime against Putin’s Russia?

Read what Geopolitical Futures wrote in their article titled Ukraine, War and American Doctrine on December 10, 2021:

Think about the utterly disastrous stupidity of this. America tolerated deaths of & severe injuries to thousands of American troops in Afghanistan because of NaPak’s support of Taleban fighters. But that was not considered a valid reason to attack & punish the Napakistan military. We read comments about how Napak’s nuclear arsenal was a big reason to exercise caution.

And now, Biden-Dems are ready to confront the only nuclear military in the world capable of wiping out all of America and for what? A crazy Ukrainian leader who will be the first to fly away in the case of war? Any one who doesn’t understand the risks involved should hear the 8-minute clip below:

Is Putin even remotely right in his refusal to accept the status quo? Look what Geopolitical Futures wrote in their Ukraine, War and American Doctrine article:

If the U.S. cannot go farther west than the plains of Poland, why is it engaging in this level of asinine brinksmanship? In any case, the Russian military is incapable of occupying even western Ukraine, then why the drums of war? Because, we think, there is a huge war lobby of NeoCons & NeoLibs in both parties that  wants a conflict with Russia. It is their holy grail or the unholiest of grails. And we have a Biden-Dems wing in power that seems to be petrified of being roasted as “weak”. So they might be coerced into this Quixotic adventure.

And look what a gift this has been to President Xi of China? He was publicly & globally praised by Putin as a true global leader & Xi gave his unequivocal support to Putin against America & NATO! See the coverage of this in the Singapore-based clip below:

There is no way Putin wants a war but he is stating clearly that, if forced, he will act. In the meantime, he has sent proposals to the Biden Administration for further discussions. What did Geopolitical Futures opine about that in their article The Russian Treaty Proposal on December 20?

That might be so. But this week’s call between Biden & Putin seems to have been positive and talks are supposed to begin soon.

Neither we nor any one else knows. But our guess is that between Europe, Putin & America some sensible back door discussions will take place in early 2022 and this “crisis” will subside with Putin getting some of the results he has demanded. This will be done in such a way that every leader can appear successful. That will avoid the Bigger change we discussed in Section 4.

In that case, we think the Big change we discussed about Russia slowly inching away from China, at least in Afghanistan & Central Asia, will take place slowly & quietly. And the focus will then shift to a serious upscaling of economic & military forces against Chinese military adventurism.

If not, the biggest change of 2022 will be an unwillingness to trust or rely upon America, at least upon the current Biden-Dems leadership. The utter mess in Afghanistan, this near disaster in making about Russia-Ukraine and the general aura of ignorant dysfunction will make it hard on any national leader to bet on America.