Notice that interest rates behaved calmly during these two different weeks – with long rates up small during the week before while falling small this past week. The 2-3 yr curve was up during both the weeks. The 30-2 yr curve flattened by 10 bps the week before while it flattened by 8 bps this week. So same trend with small amplitude during both weeks suggesting interest rates had little to do with the big difference in the two weeks.

That brings us to VIX. But what is so special about the VIX now when it had similar moves many times in 2021. Those VIX eruptions quickly resulted in VIX “spikes” which were buy signals. What is different now?

Take a look at the 30-day VIX chart below:

You see the first big jump on Wednesday, January 5, 2022. That jump in VIX subsided a bit and then jumped again on Thursday, January 13. Since that day, VIX has continued to rise & rise hard.

Something interesting happened on Friday morning. A Bloomberg article highlighted the inversion in VIX vs. VIX futures. The article pointed out that “Such an inverted curve has occurred four other times in the past year and all coincided with market bottoms“. Since pictures are worth many many words, 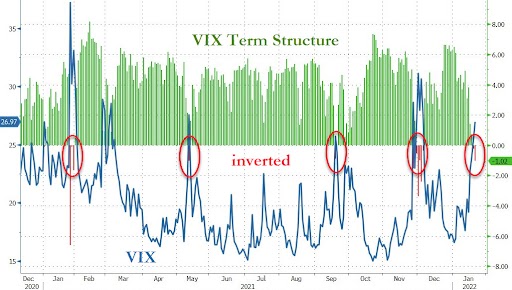 Will this January 2022 jump in VIX be a buying opportunity similar to the four in 2021 or is there something different this time? Why not ask the Guru who was right about this in 2021 and see what he says?

That Guru is Mark Sebastian, Cramer’s techni-pal. He doesn’t think, per Cramer, that the above is a VIX spike like the four in 2021. He says this January 2022 VIX move is a Swell and points out that Swells are ugly. Sebastian also points out that VIX futures have gone into backwardation: 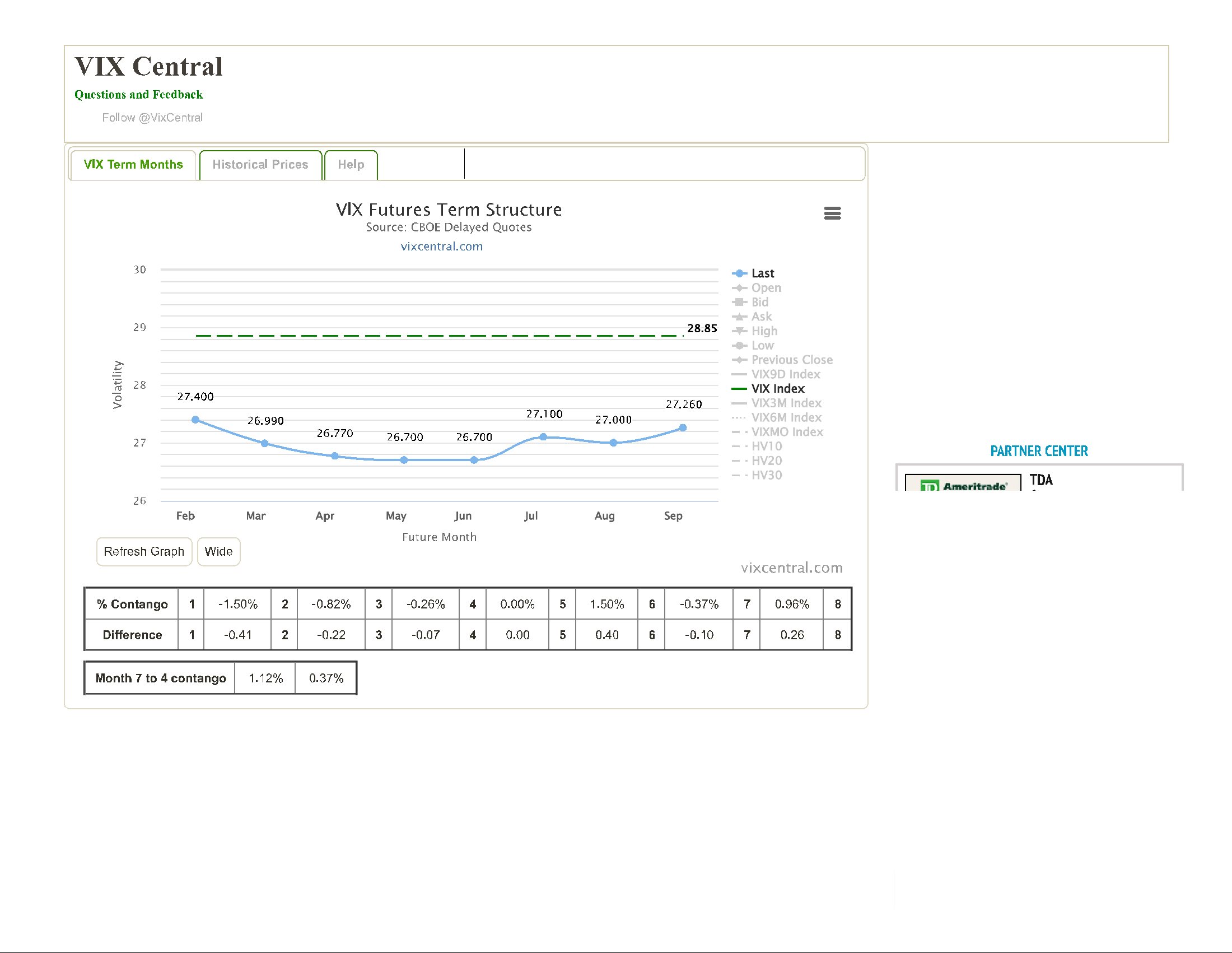 Sebastian says, per Cramer, that “such a backwardation means the market is becoming irrational .. it can mean a significant bottom or be the beginning of a hideous breakdown … In that case, it suggests that we are only 1/3rd of the way down …”

That seems consistent with what Carolyn Boroden said to Cramer last week on Tuesday, January 11, that her support for the Nasdaq 100 was 15003-15162  & if that got broken, then downside would be ugly.

This month’s VIX Swell, per Sebastian-Cramer, is more like the March 2020 fall in S&P or like the October 2018 fall. So how long might this January 2022 pain last? Until early February, said Sebastian-Cramer.

Hmmm, we say. Because 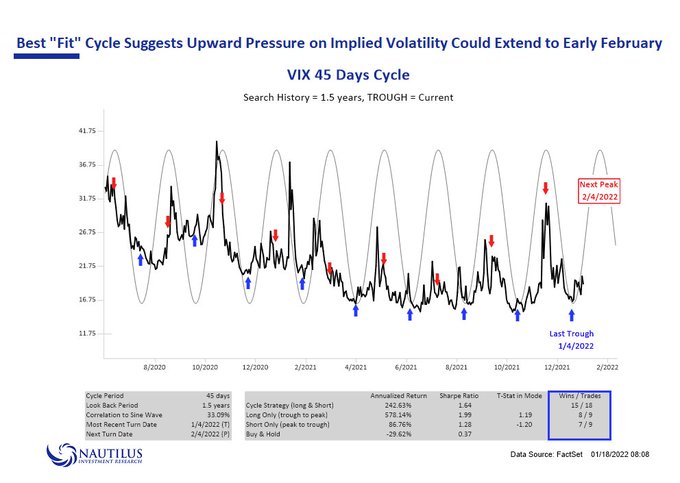 Sorry to  put a bit of a damper on this optimism about early February, but remember that, per Larry Williams & Cramer, the next big opportunity will be in late February.

On the other hand, stocks are very oversold here. As Cramer says above, that his favorite oscillator is now minus 6 and so he suggests doing some buying at these levels.

But how big could the bounce be & what to do after the bounce? Veteran Hedge Fund manager Dan Niles said on CNBC Closing Bell that he has covered all their shorts and the next 3-5% is UP on the S&P but the next 10% is down. And that might take us into early-late February, right?

What could make the Nasdaq bounce next week?

That brings us to the Big Change for the VIX.

Let us look again at the 30-day VIX chart:

As we see, the VIX rise began on Wednesday January 5 & became a Swell on Thursday, January 13. What happened on Wednesday, January 5? The new Fed “minutes” (or “updated minutes” to reveal revised Fed thinking) came out & stunned the markets with the new & stunning discussion therein about reducing the Fed’s Balance Sheet. That sent a shudder through the stock investor base because it is a tautology to say that the rise in the S&P is perfectly correlated to the rise in the Fed’s Balance sheet. So the mere thought of a brought-forward reduction in the Fed’s balance sheet rallied the VIX.

But that was just talk. Would the Fed really risk a fall in the S&P? It was hard to imagine two weeks ago. Now fast forward to Thursday, January 13 & notice up move in VIX. Wasn’t that the day Dr. Lael Brainard, the Fed Vice Chair nominee, spoke? She & Mr. Waller made it publicly clear, crystal clear, that they were not at the Fed to support Chairman Powell but to rigorously pursue the politically mandated killing of inflation regardless of the consequences.

Brainard/Waller are political appointees to the Fed and they, with the backing of 1-2 others, seemed determined to NOT let Powell remain a moderate. Having just said that, are they likely to let Powell become less-hawkish on inflation in next week’s FOMC meeting? You can see that VIX severely doubts it.

Hiking rates is a visible act of the Fed. In contrast, BSR (Balance Sheet Runoff), is an under-the-radar action. And, at best, it will act as a brake on the S&P rise. So this past week factored in 4 rate hikes, QE reduced to zero and a potential move to BSR. Are you then surprised that we are seeing a VIX Swell?

Is this week’s action & the 7% fall in the S&P enough to shake the now politicized Fed or pFed as we now call it? Even if it is, will they have the courage to backtrack within such a short time? We would be happy if they did but we doubt they will.

Then, in a week & half after the FOMC, we will get the jobs report & then the CPI & PPI reports. What if these reports show a slowdown in the economy? How will the Fed, even today’s pFed, address that? Read what Peter Tchir said to Tom Keene on BTV Surveillance on Thursday:

And Peter Tchir added – “I am actually bullish on Treasuries .. we are going to see a big risk-off move.”.

What about those who have been short duration for a while? One of them, the calm & smart Kathy Jones of Schwab, said on Monday on BTV Surveillance that “we are actually telling people to start legging into a little bit more duration … at these levels; …. we got a slowdown in the economy coming; fiscal policy changes… ; rollover in certain areas of manufacturing … “

What does that say about this interest rate cycle? 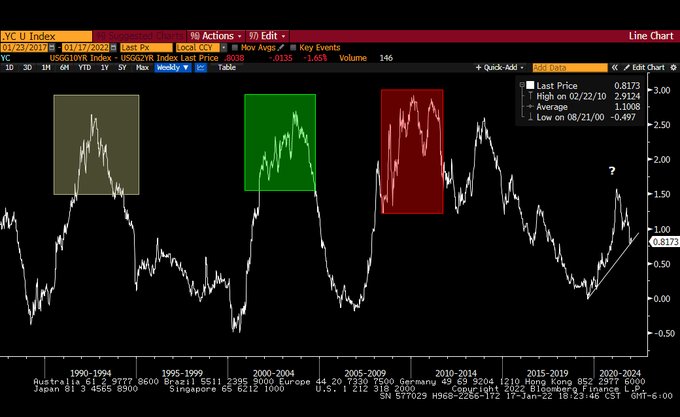 And what if it is indeed a shorter cycle?

Did someone say something similar from an equity-strategy viewpoint? 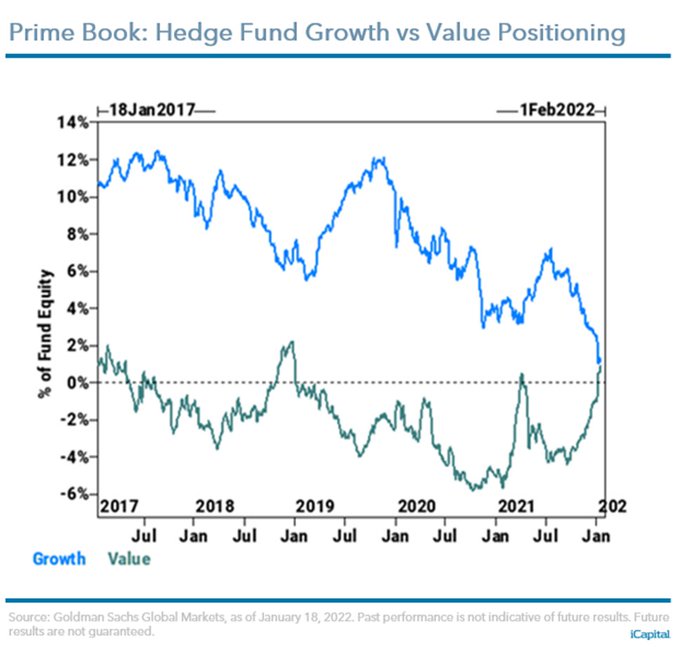 Where all this leading to, you ask? To the chance to wear Diamonds:

What might be the fuel for such an up move in Bonds? As The Market Ear pointed out this week – “Everybody is short bonds and only bonds“.