The war Americans would first think of is the 1776 defeat of British colonial armies by George Washington & the American patriots. But that war did not change the World. It gave America the time to grow. And it took about 170 years for America to become the Superpower.

That reality was utterly demolished as a result of WWII. Britain surrendered itself & its global naval reach to America. Western Europe was the biggest loser of the war in every way. Yes, it is still a rich continent but its is de-militarized and at a shell of its pre-WWII dominance. Think about it – an entire continent was ravaged & has fallen its from strength & influence for 175 years without showing any chance of regaining its glory.

The clear winner of that war was United States of America, the world’s richest, strongest & most dominant power today even after 175 years after Europe blew itself up.

The answer is simple – the World’s largest war of the 18-century.

Look back to the World’s GDP in 1700 in the chart below courtesy of Geopolitical Futures: 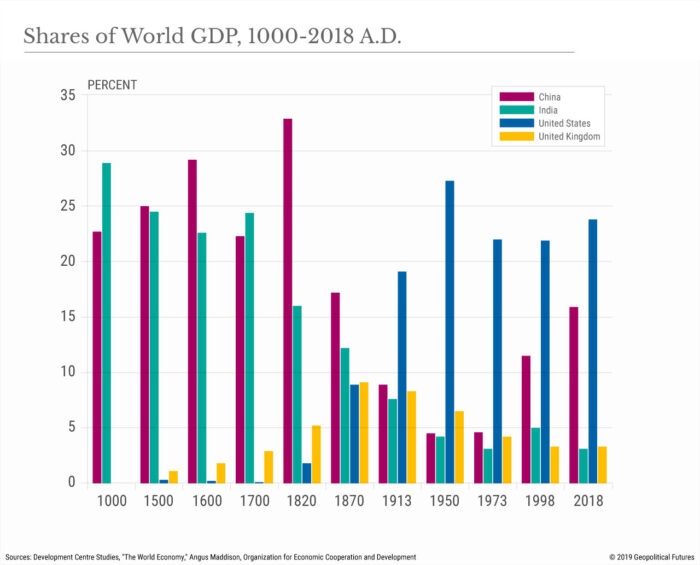 India was the richest country in the World, followed by China. Yes, India had lost its big lead in 1,000 CE over China, thanks to 500-years of invasion from Afghans & Uzbeks. But it was still the richest manufacturing power in the world. As Nick Robbins writes in his book, The Corporation That Changed the World:

Late 17th century & early 18-century saw the rise of the Marathi Confederacy that became dominant in most of Northern & Central India. The British East India Company was becoming entrenched in the north-western province of Bengal. In 1757, the Marathi armies went into today’s Napakistan & conquered the region up to the Khyber Pass. 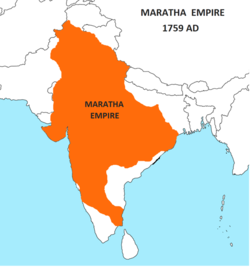 This conquest of today’s Khyber-Pakhtunkhawa was foolhardy. Like today, it was an Afghan province that was core to the ruler of Afghanistan, Ahmed Shah Durrani (“Abdali”). So Abdali, a veteran general, gathered a large army and came south to recapture the province of today’s Panjab of Napakistan.

The map of the Indian Subcontinent in 1758 looked as below: 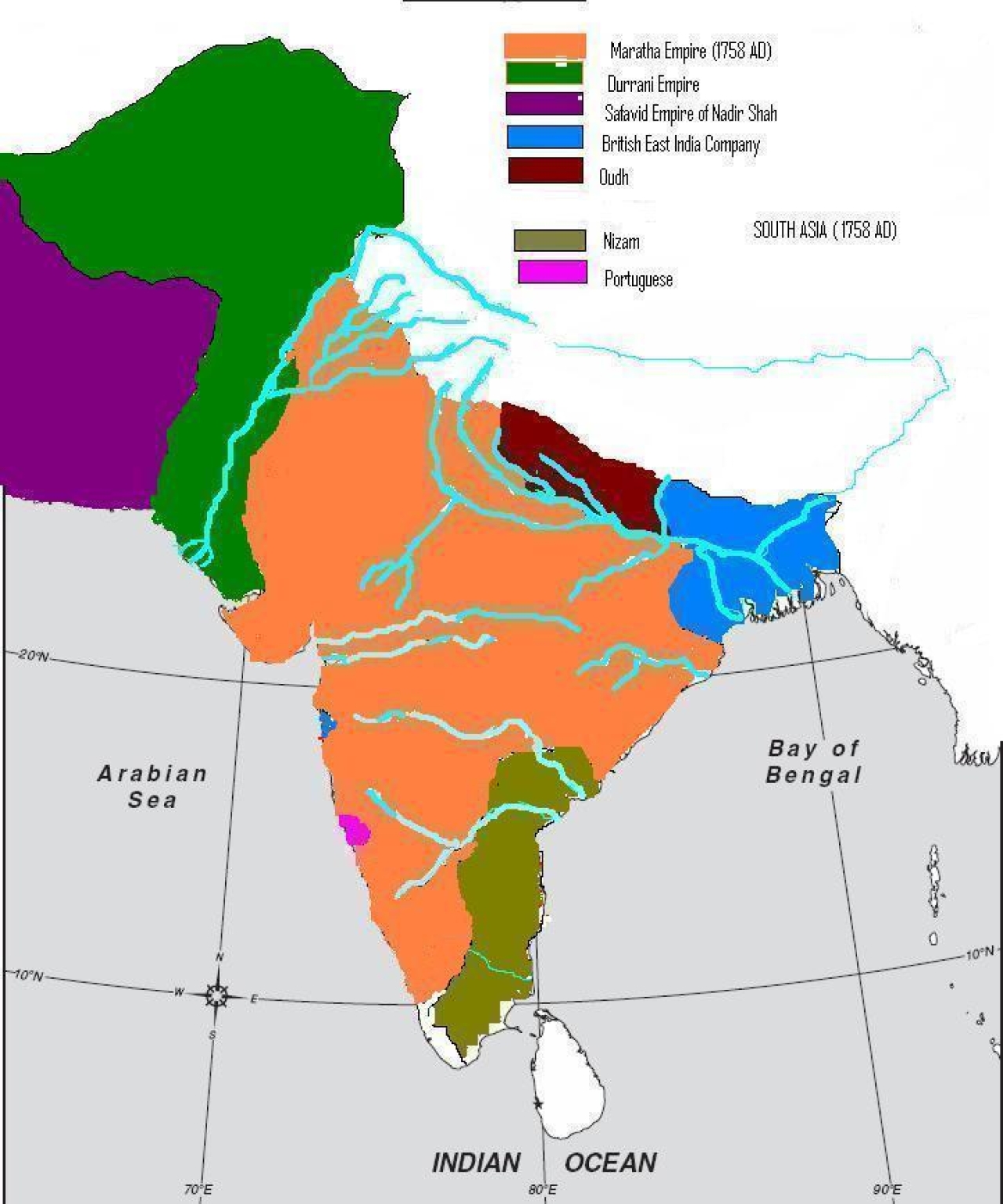 In 1760-1761 Abdali marched into North India and captured Delhi. Unlike the previous Afghan invaders, Abdali did not leave India quickly despite amassing huge plunder. He was persuaded to stay behind to fight the Marathi forces by some princes in North India.

2. The Disastrous Mistake by Marathi Leadership

Notice, the small pink blot in the southeastern coast of India in the above map. It represents the Portuguese colony in & around today’s Goa. Why is it so small? Because the previous generation of Marathi leadership had destroyed Portuguese armies & banished the Portuguese to a tiny colony around Goa.

Into the middle of that, marched Afghan ruler Abdali into North India & captured Delhi. That hurt the pride of Marathi Leadership which considered itself to be the protector of North India. So they made the asininely stupid decision to send a large army from Pune to Delhi (1475 km or 915 miles) to engage Abdali & defeat him.

All they had to do was to wait for a few more months for Abdali to go back to Afghanistan and then go north-east to wipe out the British & seize Bengal, the riches province in the world at that time.  But arrogant pride often overrides common sense & the Marathi Peshva (ruler) decided to launch a war against a smart, experienced, veteran commander like Abdali in North India without enough money, without adequate supply lines, without adequate knowledge of the terrain & without any local political support.

The final battle was magnificently fought by the Marathi army. The Marathi forces won the morning but the afternoon saw more reserves put into the battle by Abdali (not that much unlike Waterloo) and the result was a disastrous defeat.

3. A gift for the new winner – Britain

Amazing valor does not trump competent generalship and that was the final story of that battle of Panipat on 14 January 1761. Afghan forces under Abdali won but suffered badly too. In fact, that battle was the end of Afghan conquests into India. Abdali himself passed away and Afghanistan became weaker & weaker.

By 1800, “85-90% of Bengal’s external trade was in the Company’s hands“, per the detailed book titled The Corporation That Changed the World. And

Today’s India is not even considered to be anything resembling a manufacturing workshop, not even 170 years after the British plundered Bengal.

The Marathi Confederacy did not fall for another 55-60 years after the disastrous battle of Panipat. But the British became impregnable in their north-eastern region and slowly extended their reach across rest of India. How did they view India? Nick Robbins writes (page 3 of his book):

The lesson is that wise rulers focus on the longer term enemy, the existential enemy over even a larger near-term enemy. The invasion by Abdali was not an existential danger for India or the Marathi Confederacy. Britain was. Had the Marathi leadership recognized this, they would have destroyed the British base in Bengal instead of fighting a stupid battle against Abdali’s large army.

The reality is that certain enemies take an emotional toll and thus get deemed far more important than they are. Sadly focusing on these emotions about a non-existential enemy causes a long term disaster as Panipat caused to the Marathi Confederacy.

While this is going on, Xi Jin Ping of China has to be smiling & getting ready to be coronated as President for Life of China. If a conflict with Russia makes America weaker or less resolute against Chinese expansionism, then it would be an invitation for China to slowly dominate key south-east Asian countries & march towards Northern Pacific.

Fortunately, we are beginning to see some sane voices in the Bidenosphere warning about getting less resolute against China because of focus on Ukraine & Putin.

Read Chinese thoughts, watch Chinese actions and you will hear echoes of colonial Britain. You will see parallels to how Britain began expanding its influence after the disaster of 1761. As the original quote of Santayana reads “Those who cannot remember the past are condemned to repeat it.”

That is one reason why we think every geostrategy school should study & teach about the ginormous disaster the 1761 Panipat Battle proved to be. It was the single reason Britain went on to become the global British Empire.

How is that NOT worth studying?