This week was ugly. And uglier was the leadership with S&P down 2.1% vs. equal-weighted RSP down only 1.3%. And the ugliest of all were our MANAA with Microsoft down 5.6%, Alphabet down 5% and even the outcast FB down 5.5%. But nothing felt ugliester than semiconductors with SMH down 3.5% this week after being down 7% the week before bringing its 2-week fall to above 10%.

The above chart highlights the new Numero Uno factor in markets – the factor that was broadcast to the world on Tuesday April 5. Since Dr. Lael Brainard threatened to launch Rapid QT (or sale of Bonds from the Fed’s inventory) on the morning of Tuesday, April 5, the markets have been falling.

But wait. Since QT is about selling Treasury bonds, how have they performed since the Brainard bombast?

Actually this looks uglier than the QQQ chart and it should. Because look what the long-duration Treasury yields have done for the past 10 days:

But wait a minute. Isn’t this mainly because of the Fed’s threat to raise rates by 50 bps during the next few meetings because of inflation? What is the Treasury maturity that is most sensitive to the Fed’s threat to raise rates? The 2-year Treasury, according to most experts. So the 2-year Treasury yield must have skyrocketed during the past two weeks right?

What gives? Is it the old Mafia dictum that people are more scared at the thought of being shot than after actually getting shot? In fact, look at the Tuesday-Wednesday action this week in the above 10-day TLT chart. Treasury yields fell hard on Tuesday (2-yr down 12.5 bps) & also on Wednesday (2-yr yld down 3 bps) despite horrible inflation numbers. Isn’t that a typical reaction to inflation news already factored in?

Then came the deluge again on Thursday after the inflation news was already factored in. Notice also that QQQ was flat-up on the same Tuesday-Wednesday as TLT was flat-up. Then on Friday, QQQ fell hard & SMH was shot as Treasury yields rose hard again.

If we are right about the primacy of the fear of QT, then the “peak of inflation is behind us” type calls this week from Gundlach & Minerd may not be as actionable now as they might have been during a classic Fed tightening.

The best description of the action in Treasuries came from 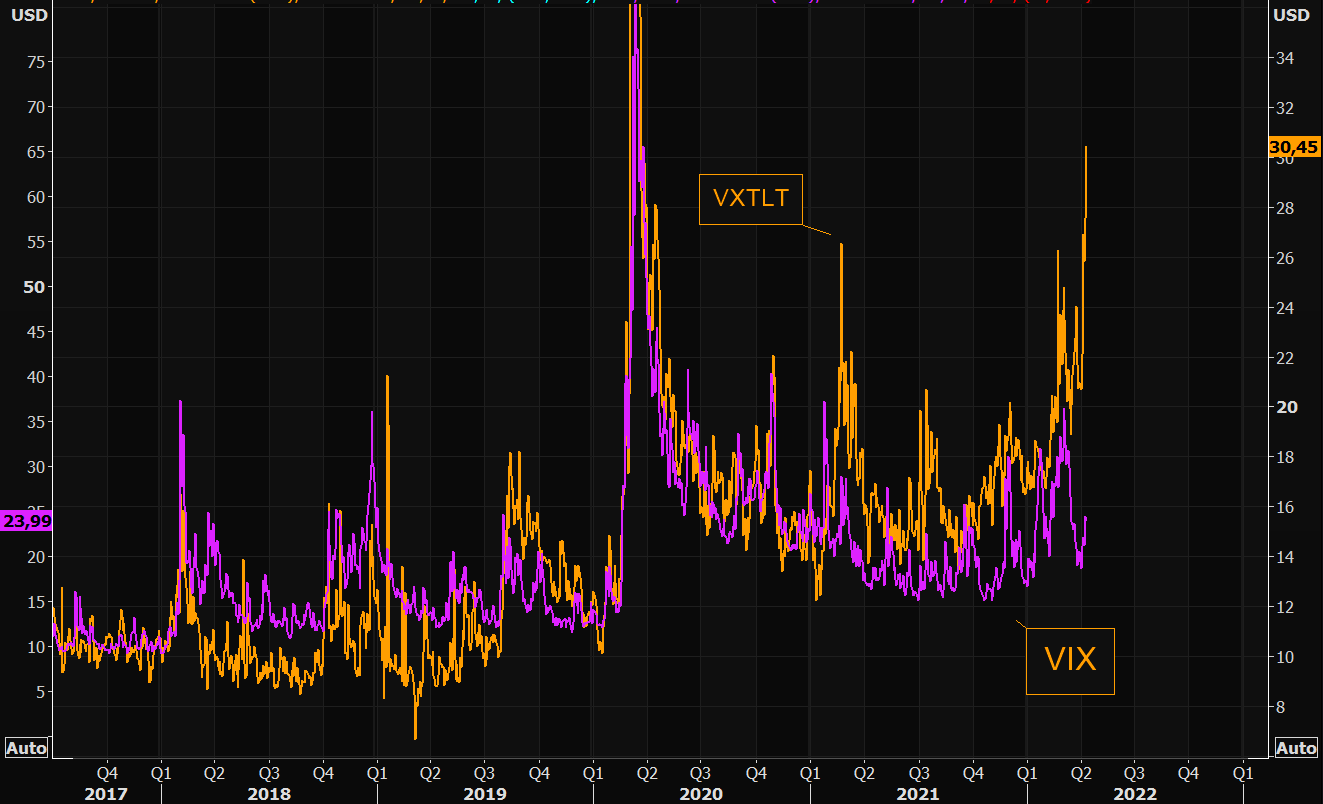 Looking back, the fear in TLT described by TME on Tuesday as “unstoppable”, “extreme” was lower than what we saw on Thursday afternoon. And that fear was also transmitted to the SMH which was virtually outcast as a leper that afternoon. The nature of that fear was discussed by a few gurus but the only public expression we could find was: 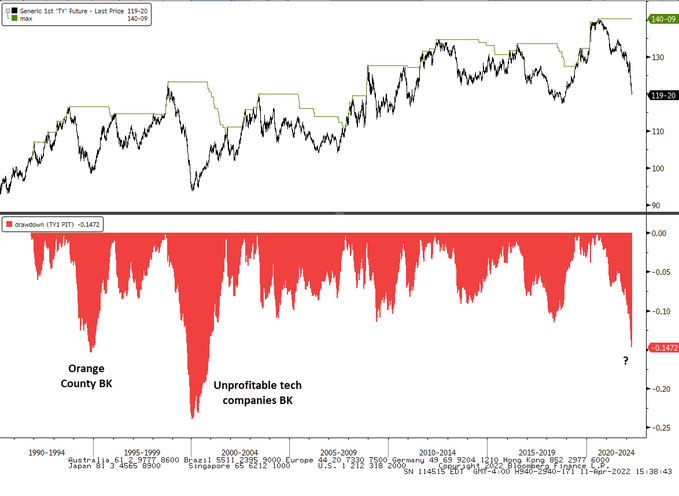 Once again, if April 11 was “forced selling”, what was April 14 afternoon? A Treasury Mariupol? On the other hand, what if this “extreme” fear & “forced selling” continues for the next 2.5 weeks? Will the FOMC still summon the courage to launch QT on May 4? Or will they run scared again & talk semi-reasonably?

Will the smart big players buy TLT Calls ahead of the March 4 FOMC? Hopefully the Najarian semi-twins will tell us of any such “unusual activity”!

Look at this tweet from Ian Bremmer on Saturday April 16:

Mr. Bremmer is way way way above us in every grade we can imagine – wealth, income, influence, reach, intellect, smarts, ability to come across as likable & reasonable – except one – Simple Mind & its Simplicity of thought.

The question is why Mr. Bremmer posted such a tweet, a tweet that seems to contradict the passion with which he used to discuss the US determination for Putin’s removal, the defeat of Russia & even a severe damage to Russia’s economy.

But we agree with at least what we understand he is saying in his tweet. That the best outcome for the US is for this conflict to end immediately. That means, in his view, the consequences for US or at least the effects of the Ukraine war for USA could only get worse from here; progressively worse.

Let us count the reasons he could be right beginning with an earlier tweet from Mr. Bremmer:

President Biden is indeed correct in arguing that the family budget of Americans, the ability of an American to fill up his/her tank should NOT hinge on what Putin does. But he does NOT seem to care what US actions to help Ukraine fight this war are doing to billions of family budgets, the ability of billions of families to afford petrol/gasoline in Africa, Middle East, Latin America & Asia.

Perhaps Mr. Bremmer is noticing how the world is beginning to express anger at the United States & even  sympathy for Putin. And the core reason is the use of financial sanctions as a weapon by USA.

More importantly, even the American family is beginning to get frustrated at the man & party they put in power. And that includes

The two stunning lines from the article to us are:

If Putin is going to remain president for another year then this American war against Putin will only get messier & much more expensive, leading possibly to oil prices remaining high for a whole year & food prices remaining higher with the loss of Russia-Ukraine food production.

And not to mention,

Will America & EU step up for Africa & Latin America while their own people are suffering from high food costs, gasoline costs & weaker economies?

Is this why we are seeing at least some steps to stop the isolation of Putin? Steps like Indonesia saying clearly that Putin has the right to attend the G-20 & they would welcome him? Notice how Macron has now stopped calling Russian actions as “genocide” and described Russia & Ukraine as “brother nations”. What if Maurine Le Pen wins? Isn’t she saying France should pull out of NATO?

Then we see an outbreak of violence in Jerusalem. And Lebanon can’t afford to feed its people. Does that tempt Hezbollah into action that might force an Israeli retaliation? And Egypt, one of the largest buyers of Ukrainian wheat, is reportedly contracting the purchase of one million tons of wheat from India. What does that mean for the rest of the Middle East?

But wait a minute. Russian forces in Ukraine are in deep trouble, right? Surely if they can’t protect their flagship from an Ukrainian missile, they have to be totally incompetent, right? Not necessarily, at least according to one Pentagon assessment:

This to Mr. Bremmer has to be the really bad news. As this bloody conflict goes on for months, the risks for & the frustration of the Biden Administration can only increase while the support in America for this long & far away war keeps going down.

Remember the proposal by the Israeli Prime Minister to let Russia keep Donbass, Luhansk, Crimea & the belt from Russia to Crimea? It seems Ian Bremmer would support that now despite his then absolute demand for Putin’s ouster. This is not a criticism for Mr. Bremmer but another evidence that wars are not be waged on emotion & morality. Because as America found out in Iraq, even a quick & decisive moral victory over a really bad guy can become an eventual defeat if you can’t get out after the initial victory.

But the Russian people have to be even more sick of this war, right? So couldn’t a regime change in Russia take care of this mess? That was the question Lisa Abramowicz asked Nina Khrushcheva on Bloomberg Surveillance. The answers surprised us.

Regarding regime change, Ms. Khrushcheva said that now Putin, the Security Apparatus & the controlling state power are one of the same, while that was not true even in the days of the all-powerful Stalin. In practical terms, this means Putin is the State & even if he is removed, another one from the same group takes over. That means the name plate might possibly be changed if things really deteriorate but the regime will be the same.

The more difficult point we heard from her is about the support for this war among Russians. She said:

This we think will be the abiding result from this war. That crippling financial sanctions may sound great & costless in theory but their consequences can be horrific to both on whom they are launched & to the launcher. It is our desperate hope that we are wrong but we keep wondering whether these financial sanctions will spread financial contagion on every nation just as Corona Virus has spread havoc on ever nation including the one that launched it at the world.

Getting back to Russian support for this war, read the tweet below with our small edit & without the attached video

We suspect this is what many in the Russian military are asking. And that is not conducive for a quick end. And neither is the scenario discussed in the sensible discussion below from Ret. Lt. Col. Daniel Davis on Fox:

Regarding the sinking of the Russian flag ship,

That brings us to the ISW’s  RUSSIAN OFFENSIVE CAMPAIGN ASSESSMENT, APRIL 17. Their headline reads:

The other headlines read:

Combine this update with the clip above of Lt. Col Davis & you might conclude that this war would probably last for weeks or even months. Not ideal for either the elite Ian Bremmer or simple folks like us.