Any one who has any knowledge of US-India relations over the past decades knows how a new crisis can erupt & seriously damage positive progress made over prior years. For its part, Washington DC is used to its allies & partners subordinating their interests to fall in behind US imperatives. And India has always insisted on subordinating US requirements to its core strategic interests. As a result the US-India relationship has been subject  to sudden & intense crisis eruption.

This is why we have used a paraphrase of the title of a book we reviewed in 2014  Forged in Crisis – India & the United States Since 1947, written by Rudra Chaudhuri, a lecturer in Strategic Studies at the Department of War Studies and the India Institute, King’s College, London.

In that book, Chaudhuri made a point that we described then as “the most important and most difficult especially for the NeoLib community in the US.”

Guess what, the more things change the more they remain the same. Note that our review of Chaudhuri’s book was written in 2014. That, coincidentally, was the same year the pro-Putin elected leader of Ukraine was toppled by the Euro Maidan protests & Ukraine turned decisively from a pro-Russia stance to a pro-US stance. President Putin retaliated by taking over Crimea & making it a part of Russia.

Fast forward to March-April 2022. President Putin has sent his military into Ukraine and the United States with US allies have hit him with devastating financial sanctions & delivered effective military aid to the US-trained Ukrainian military. In addition, the US-EU alliance has sidelined “the very notion of sovereignty” and tried to coerce all nations to follow what US-EU demanded of them.

And once again, to use Mr. Chaudhuri’s words, India represented and advocated “an alternative set of arguments“. That inflamed not only the NeoLibs, the most organized & prominent US enemies of India, but even others who have not traditionally been anti-India.

A summary of the US views was published by Geopolitical Futures on April 18 in their article “India’s Defiance of Washington’s Russia Strategy“:

None of the above made any sense to India and Indians. And this time India was represented publicly by an articulate & firm External Affairs Minister JaiShankar.  He pooh-poohed the concern over Indian purchases of Russian oil by a sharp, concise & devastating riposte:

And there was zero chance that India would let its military relationship with Russia get negatively affected simply to placate America. The reality was simple & both sides knew it. As an article in War on the Rocks pointed out:

And the Indian public opinion was solidly behind PM Modi in refusing to kow-tow to America. Even Suhasini Haidar, hardly a Modi-supporter, titled her 18-minute WorldView presentation as Why won’t India budge on Russia?

This seemingly intractable chasm brings us back to Chaudhuri’s central point in his book Forged in Crisis – India & the United States Since 1947:

That is exactly what happened again in April 2022. Both America & India managed to remain sure-footed & resilient. This has been due to the Biden-Modi meeting and the subsequent 2+2 meeting between foreign policy & defense policies heads of America and India.

It seems clear that, instead of being disrupted by the Ukraine crisis, the US-India relationship might have been been re-forged to a higher & more mutually beneficial level.

What core interests does America see in the relationship with India? A decent summary comes from the article India’s Defiance of Washington’s Russia Strategy from Geopolitical Futures:

A simple consequence of this is the recognition that USA cannot allow differences in the Ukraine-Europe theatre to derail ties in another, more consequential China theatre.

On the other side, as Sreemoy Talukdar wrote in his article in Firstpost.com, India sent a clear signal that “the US remains unequivocally its preferred partner“. He added that “Prime minister Modi told Biden that as we celebrate the 75th anniversary of our diplomatic ties, “I am confident that friendship with the US will remain an integral part of India’s development journey over the next 25 years.””

And Indian Defense Minister Rajnath Singh stated publicly that “India will be very careful to ensure that US core national interests are not affected adversely due to our relations with another country.”

The bottom line according to Talukdar is:

Regardless of what might be said publicly, it is obvious that reducing its dependence on Russia will be a major focus for India’s Defense Establishment. India was already on this path but the Ukraine war has made it an urgent priority.

But India is unlikely to simply move to another foreign supplier from a current proven supplier. India’s drive will be to build its own defense industry with joint ventures. India had already begun discussions with France to structure a hub in India to maintain, support & repair the Rafale fighters France has supplied to India, Abu Dhabi & Indonesia.

That was emphasized after this  2+2 meeting, as Talukdar reported on April 15,

Within 5 days veteran journalist Manu Pubby reported the following in the Economic Times on April 20,

The strongest  relationship between the US & Indian defense forces has been between the two navies thanks to joint exercises over the past several years & progress in interoperability. In fact, India had already begun buying platforms the US Navy uses like the deal in 2020 to  buy 24 of the Sikorsky-built MH-60R helicopters that the U.S. Navy uses for anti-submarine warfare. 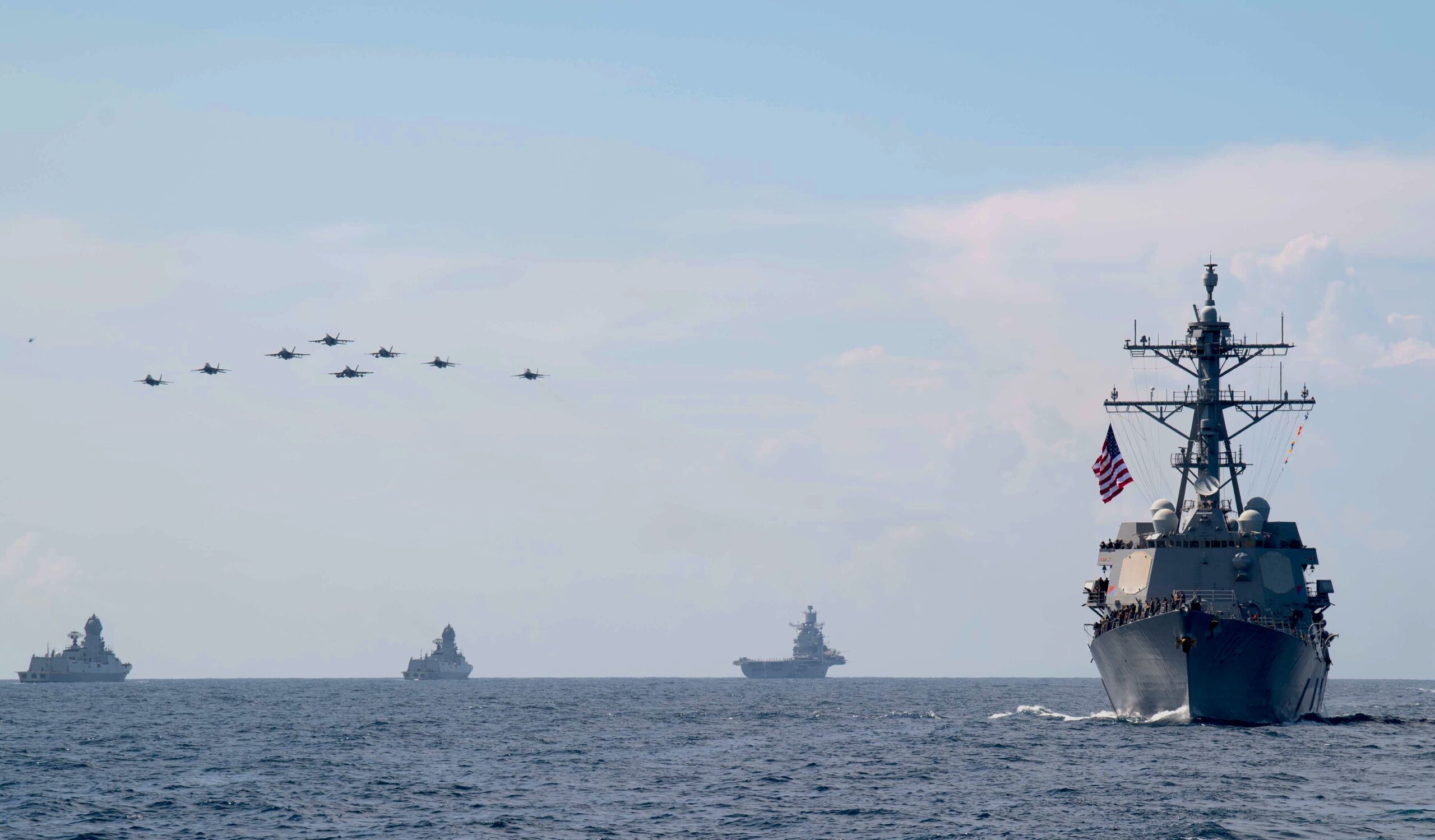 Australian, Indian and U.S. ships sail past each other as fixed-wing aircraft from the India and U.S. navies conduct a flyover during Malabar 2020 on Nov. 20, 2020. US Navy Photo

Given this recent history, we were not surprised to see the article by Mallory Shelbourne of USNI News titled India Considering Repairing U.S. Military Sealift Ships Following 2+2 Dialogue :

The clip below from Hindustan Times highlights the boost this would provide to US-India Naval relationship:

Perhaps motivated by the success of the US-India 2+2 meetings, Russia took the unusual step 6 days ago of delivering the 2nd regiment of the S-400 anti-aircraft system to India ahead of schedule. The message to India is clear that, despite its war in Ukraine, Russia is both willing & capable to delivering armaments to the Indian military. This is even more notable because this 2nd regiment of the S-400 system is going to be deployed to cover the airbases China has established in Tibet.

Despite such Indo-Russian military purchases, the United States realizes, according to Talukdar, that

If even half of the above gets realized, then “the Ukraine war” would clearly end up “further galvanizing bilateral ties” between USA & India.

Now look what happened at the end of this week. During the visit of British Prime Minister Johnson to India, he said that “Britain will issue an open general export license to India, reducing bureaucracy and shortening delivery times for defense procurement“. “This is our first OGEL in the Indo-Pacific region,” he added.

None of this would have been feasible without the understanding developed in the US-India 2+2 meetings & the decision to upgrade the US-India defense relationship. So the Johnson visit confirms our sense that the Ukraine crisis is actually galvanizing the USA-India relationship to a higher & more meaningful level.