Tuesday was a negative with Walmart surprising on the downside. But what Target reported & said on Wednesday was utterly stunning. Because Target is not Walmart. We never see Walmart shopping bags in Manhattan (not sure if they even make one) but Target bags are everywhere. Walmart sells lots of groceries and Target sells higher priced stuff to more affluent customers. That may be why Target’s guidance was received so badly by investors.

Interest rates of course fell hard & actually kept falling into Friday’s close. Once again, it was like old times. Dow, S&P and NDX down 3% and TLT up 2% on the week laughing at those who keep saying old 60-40 is for the history books.

Jim Bianco is not sure. He wonders what will Treasury yields do when stocks do see a bounce. His guess is that Treasury yields go up again. If so, then we know it is back to old 60-40. Bianco says the Fed is now actively shooting against employment & wages. Their put is going to be based on how much unemployment they see rising & how much wages are falling. Their “target are the people who have to live on fixed-income“, to quote Jim Bianco. This may be why macro folks like Frances Donald said on BTV Real Yield that “every indicator we have says it is going to get worse“. What makes you money in that environment?

Is that a signal of sorts from the Fed? 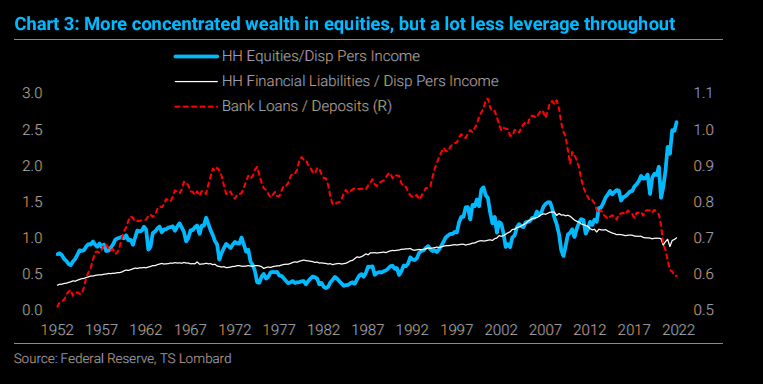 The question is whether the Fed has also been targeted into speaking more softly. If so, then a simple indicator might be sending a signal: 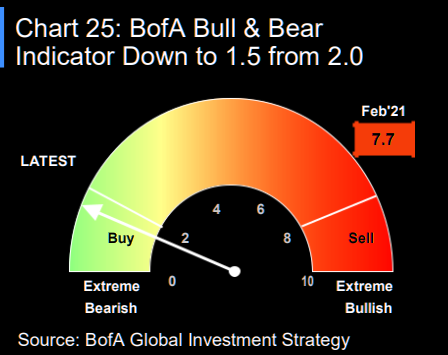 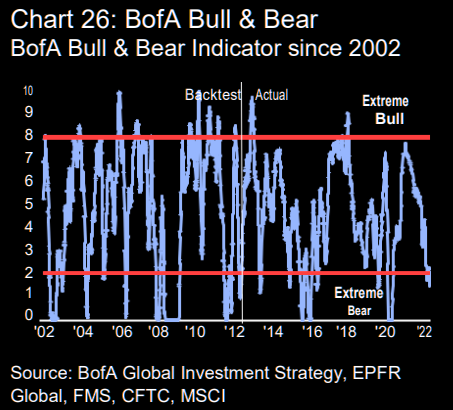 Then you have another extreme: 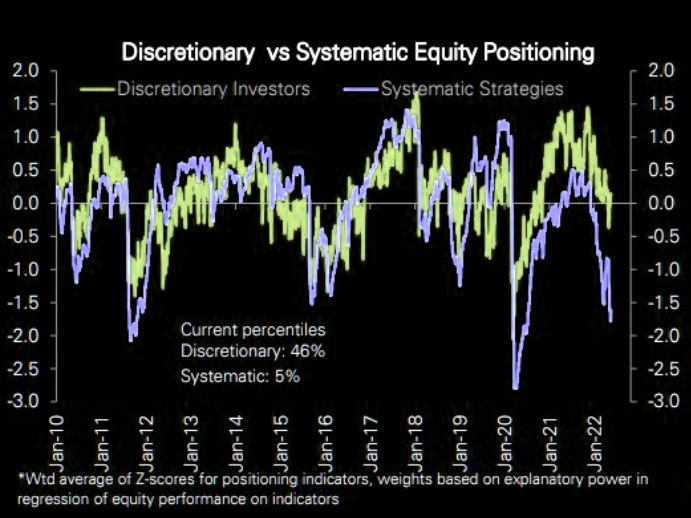 But what about the G-term we keep reading about? 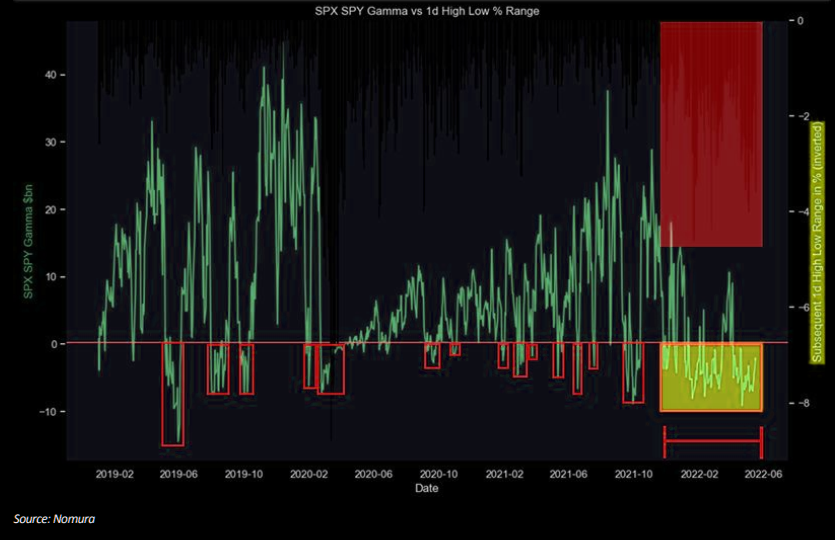 Is there a timing event that might create buying? It is the old-fashioned Month End. What is expected at May’s month-end? The Market Ear reported a few estimates of “month-end flows” from “various banks”:

But what might make better buys? Barry Knapp pointed out this week that Tech is now at same valuation as Staples and, in that case, he would take Tech every time. Within tech, he specifically likes Semiconductors.

What about commodities you ask?

That is an indicator we can accept. We recall a standing room only conference in Manhattan in 2000 about Telecom stocks with focus on fiber changing the world for good. And we also remember a huge ballroom filled with investors in Delhi in February 1994 listening to great potential of Indian stocks. This was after a glorious 1993 in which Pfizer India, Glaxo India etc. were up 100% plus & selling at crazy multiples.

Sri Lanka was declared in default this past week. Among the years of mismanagement was the Chinese One Belt & One Road debt piled on by Sri Lanka for Chinese investment projects using Chinese companies & Chinese labor.

What country was even a larger recipient of such Chinese economic aid? The utter mess of a so-called state whose currency blew past the psychological barrier of Rs. 200/- vs. the $ this week. If that was not enough, look what happened a few days ago to one of the more important projects of the China Na-Pakistan Economic Corridor.

And it wasn’t even a mega flood, just one solitary flooding of one glacier lake, one lake out of some 7,000 such glacier lakes in the Himalayan section of NaPak-occupied Kashmir.

As a local article reported:

Apparently governments of states like Sri Lanka & Na-Pakistan viewed Chinese investment as semi-free money & never really planned for repaying it. That may be why so much of its ended up being mal-invested. Now these states are in a debt bind. Would (EU-US majority) IMF really loan large sums of money that would probably used for repayment of Chinese debt? Or would China agree to forgive or re-schedule its debt to give these states room to recover?