This has been a topsy-turvy year. Whether you mean “upside down” or “chaotic” by that term, this year has been that. The proven wisdom over the years of 60-40 stock-bond allocation was shown to be dangerous. Seasonality patterns were torn apart. And, as this week showed, the “Sell in May & Go Away” dictum may need to be turned upside down to “Buy in May & Come In”.

Smart people have been coming on Fin TV and calling for a sharp & strong rally for the couple of weeks. Finally the stars got aligned and we got a rip-roaring rally this week, more specifically during the last 3 days of this past week.

The balance was restored this week with,

And the “most accurate contrarian buy signal”, as it was dubbed last week, is even more bullish now: 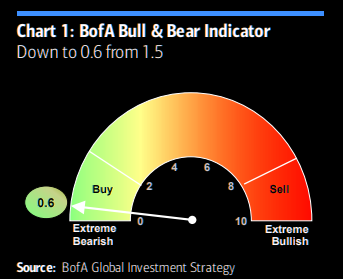 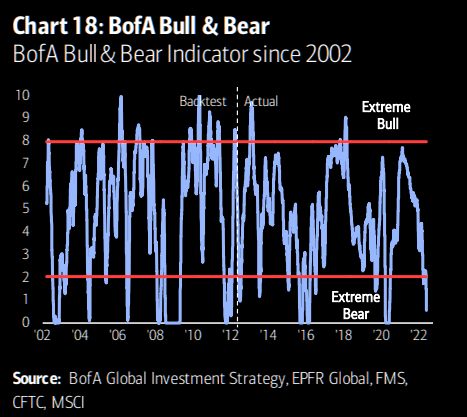 But signals don’t create rallies by themselves. Actual buying does. Last week the talk was about sizable month-end buying from investment banks. That should exhaust itself by Tuesday May 31. Is there another source of buying or forced buying which is buying of the most painful kind? 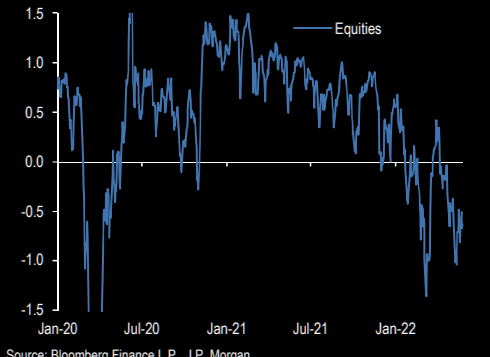 What is another source of buying, now that earnings are out & corporate windows have opened?

But all the above is secondary. Just a quick glance at this past week shows the primary & dominant trigger in the market:

Notice that the stock indices were virtually flat on the week until the Fed minutes were released at 2 pm on Wednesday. And then, Voila!

“Thank you Jay, if we may fondly call him so” was what we wrote on May 8. We thought his performance was superb in his presser on Wednesday, May 4. We had added then – “Our point is that Jay Powell was being sensible in saying that the Fed was not considering a 75 bps increase in the next FOMC.”

Unfortunately for him, the next day was a disaster of sorts because of the unholy combo of falling productivity & steeper inflation. And the Treasury market puked on Thursday & Friday – 30-year Treasury yield rose by 18 bps, 20-y yield rose by 20 bps, 10-yr up by 18 bps, 7-yr up 17 bps & 5-yr up 15 bps. And VIX jumped up to 35 on Friday morning.

That was bad luck for him but good news for Treasury investors because that was the local peak in Treasury yields. David Tepper closed his Bond short, as he told CNBC on following Monday morning. And Treasury yields have now fallen for 3 straight weeks since Friday May 6. And TLT is up 5% since that Friday.

And look what Bond volatility has done: 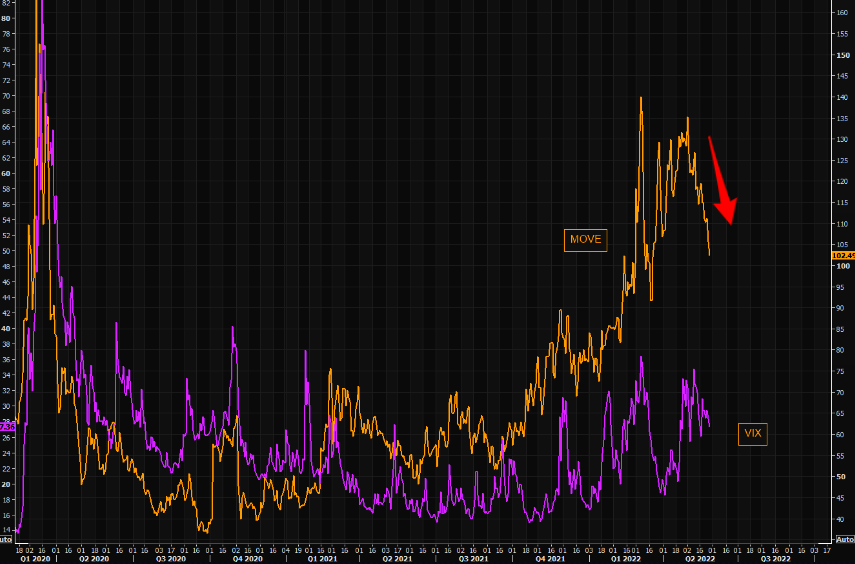 In accordance with Jay’s updated FOMC minutes that followed, Bostic went softish on Monday. And then we saw Frances Donald of ManuLife speak of a Fed “pivot” in September to CNBC’s Kelly Evans on Tuesday:

Two days later, Priya Misra of TD Securities spoke of a 3rd regime in interest rates this year (1st being short rates going up, 2nd being long rates going up) on BTV Surveillance:

Ms. Misra was calm & unruffled as she spoke about tightening in financial conditions on Thursday morning. In stark contrast, Prof. Jeremy Siegel was anything but calm as he spoke with CNBC’s Scott Wapner on Tuesday after the close about what he saw – “the 2nd largest monthly decline in the money supply in more than 60 years” and said “the Fed is withdrawing liquidity perhaps a bit too quickly“. Watch this clip. It is important but also humorous with Wapner’s stunned consternation at Siegel’s pivot:

Then came Ian Lyngen of BMO on Thursday morning on BTV Surveillance (minute 50:50):

By the way, the 7-year auction was just white hot. Santelli couldn’t believe that only 6% of the auction was left for the Dealers to buy. Does that justify the “Yield FOMO” term Ian Lyngen used on Thursday morning?

Ian Lyngen also answered the “where are the buyers” question Dominic Konstam had asked on Friday May 7 on BTV Surveillance: 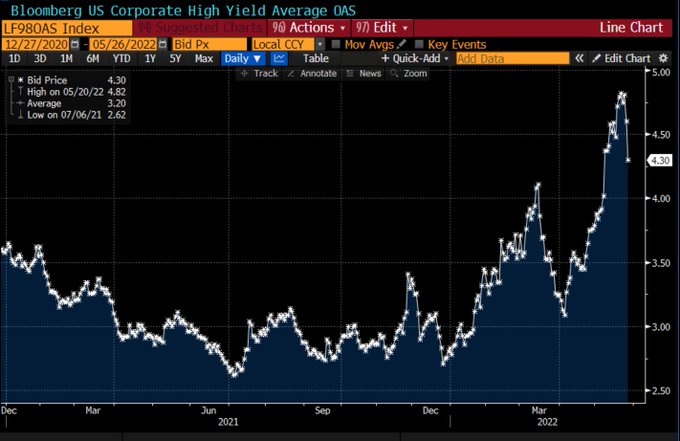 Frankly, we don’t get Scott Wapner, the host of CNBC Half Time & Over Time. The key to excellent Fin TV are guests, smart guests, who add value and Wapner has delivered that probably more than any one else. But he seems to go overboard at times like when he abused JPM’s Dubravko when Dubravko was right & Wapner didn’t understand his point. And since then, he has been petty in not bringing back Dubravko on his show.

Now this week, Wapner went the other way in praising Barry Knapp, a frequent guest on CNBC. Knapp is smart & often makes good points. But Wapner went overboard for some reason calling this week’s rally as “the Knapp Rally”. How nuts is that? Many smart guests spoke of a rally given the abysmally oversold conditions. So did Knapp last week in a “I am beginning to buy” kind of a way on CNBC Squawk Box.

Actually the two smart points he made were DELETED from the clip posted by CNBC Squawk Box as they often seem to do. Those points were what we featured last week – that Tech was valued similarly to Staples & so Knapp would take techs over staples any day at the same multiple & his call on buying Semiconductors which worked out well this week.

With that, we confess wondering whether Knapp had the gumption to complain to CNBC Squawk Box about deleting his smart actionable points from the posted clip of his remarks. Probably not would be our guess. Because guests probably don’t get re-invited if they complain about actions of CNBC shows.

With all that, we do highlight what Knapp said this week to Wapner. It is a different & more meaningful reason than the ones expounded by many rally proponents:

If Knapp proves right about his productivity thesis & margins holding up throughout the second half of 2022, then this may well end up being the bottom of the stock market for this cycle.

The contra example was provided by Jonathan Krinsky on May 25 (before the 2 pm Fed minutes release that sparked the huge rally) who had called the steep correction we have seen in the past few weeks:

We certainly don’t have a clue but, in our simple view, what the Fed does with QT will end up being far more important to markets than what they do with interest rates. If they stay on the QT road while the global economy keeps slowing down, then we might get a different market reaction than what we might see if they postpone QT or make it much more gentle as the economy slows.

Those who like feeling a shiver down their spine might enjoy the clip of JPM’s Christyan Malek on BTV Surveillance on Friday (at minute 2:05:00). His upside target on oil is $150 in second half 2022 & he says gas prices across the U.S. will hit $6 in 2H22. He points out that “we have never been below 5% of global spare capacity in the world; that equates to a much bigger premium for oil than what you would expect it to be“.

He made an interesting case about emerging markets saying

But what about emerging market countries who hardly have the currency needed to buy oil? Malek did not address this but we all might have to especially when a particular emerging market state has the 4th or 5th largest nuclear weapons arsenal in the world; a state that has only $10.2 billion in reserves but a $90.12 billion in debt; a state that unsuccessfully tried to persuade the IMF last week (in a meeting in Doha) to provide a loan of $3 billion dollars. And a state that is now in the midst of a political civil war?

They could have done it more smoothly but how smart was the Biden Administration to get out of Afghanistan & the need to suck up to Na-Pakistan for the overland & air routes to Afghanistan!