1.Inferno! “recognition & rejection of sin … to journey towards God”

Thursday was really really bad thanks to the ECB living up to Europe’s history of plunging the world into a mess. Then came Friday morning with the twin shocks of CPI & UMich Sentiment & hell broke loose. The last two days reminded us of Dante’s Inferno with the destruction of wealth & confidence we saw. 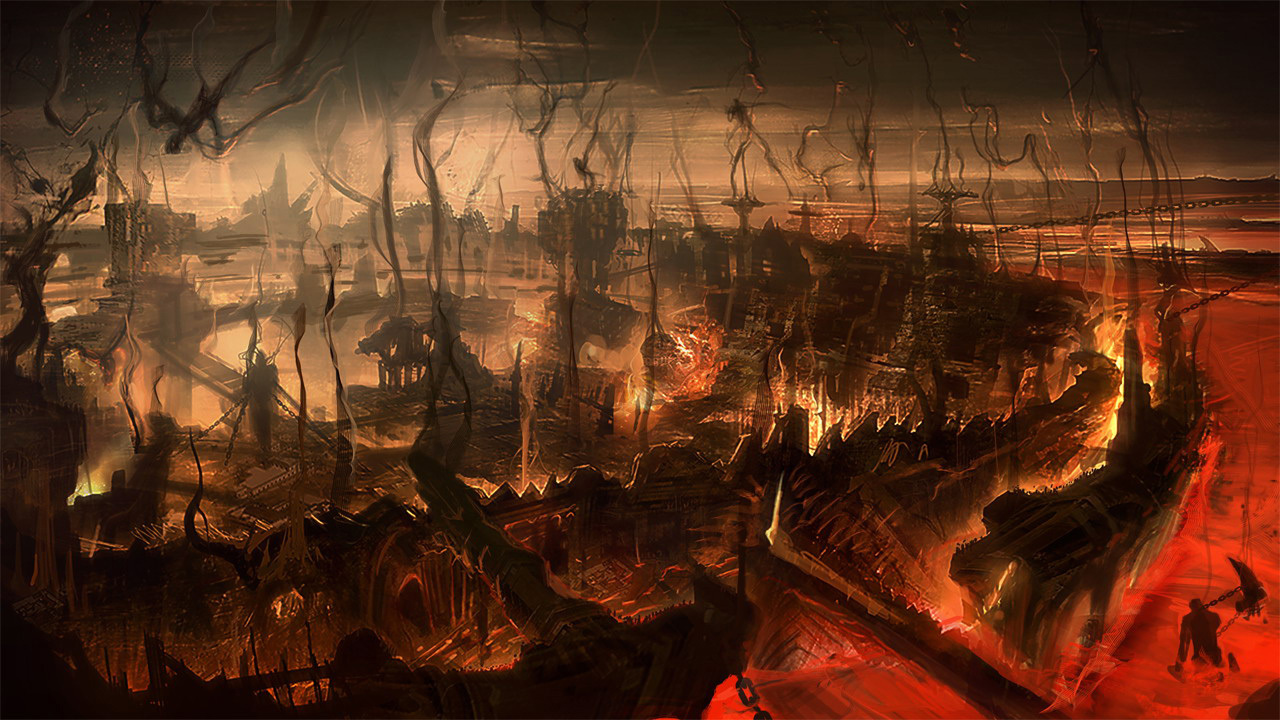 Remember that Dante’s epic poem “Divine Comedy” represents “journey of the soul toward God, with the Inferno describing the recognition and rejection of sin“. Replacing God with monetary morality & prudence, replacing Dante’s sin with the unnecessary & reckless pumping of liquidity, you could perhaps use Dante to describe what happened last two days as an inferno!

If you think what we wrote above is bilge & nonsense, then you are like us. Because we have been revolted by the moral-sounding sagacity displayed on Fin TV by elite talkers who have never succeeded at money management. Ergo, we thought we would go a step beyond them by quoting Dante.

First & foremost, we are even more firmly convinced about the destructive moronity of Europe. Not being content with destructive foreign policy moves about Ukraine-Russia war, the ECB is now taking pride in their plans to raise rates by 50 bps twice in the next few months. ECB was the principal reason for Thursday’s carnage despite the success of the 30-year Treasury auction at 1 pm Thursday.

Then came Friday’s shocking CPI print, the adjective being a synonym of what we heard on Fin TV. But the shock might be to those who refused to get into the components of inflation details:

Actually the statistic causing the “sin” analogy is not inflation; it is the L-word: 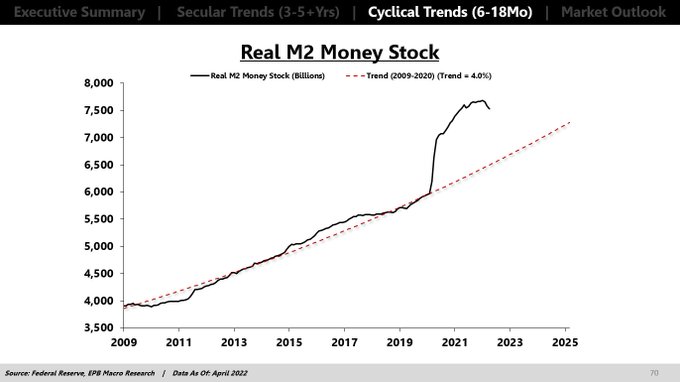 Our own view is that the Fed should just hold Real M2 growth flat into 2025. That is sort of what the Fed did after the end of WWII. After all, the Fed is not an agent from God. Their mandate is given to them by the American People. And look what this insane “inflation focus” based curbing of liquidity is doing to the American people: 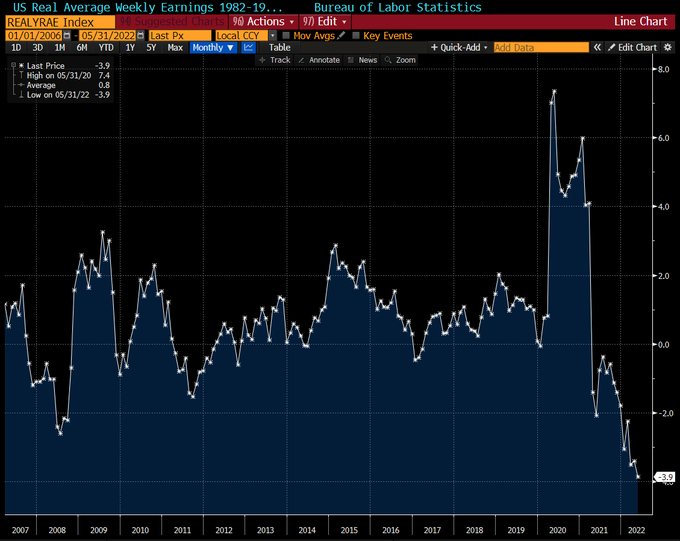 Guess how American consumers are feeling about this double pincer? 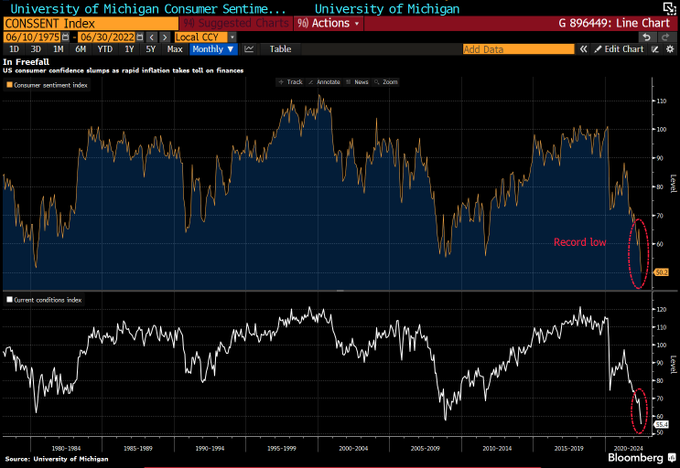 But some point to light at the end of the tunnel via their vision of a final ditch to cross before reaching the promised land:

In other words, hope has to be shed & gloom has to pervade before we can start to see the end. Bernstein is not talking about ordinary folks who already are in financial misery. He is talking about the elite FinTV stalwarts who are now flooding the screens with moronic ideas. When they come on & start saying it is too late, that may be the first hopeful sign.

In other words, look for (our symbol for American Brahminism) Andrew Ross Sorkin of CNBC Squawk Box-NYTimes beginning to talk in a different & all-hope-gone tone & Becky Quick challenging him instead of backing him.

In the mean time, what are the regional Fed centers talking about the most? 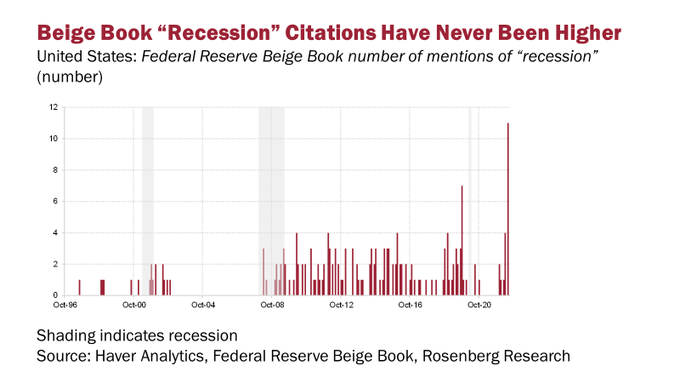 Wasn’t it merely a couple of weeks ago when we showed how Bond liquidity had fallen? Today is starkly different. As The Market Ear showed on Friday evening that “Bond volatility, MOVE index, is surging and VIX needs to catch up some. The gap remains huge..” 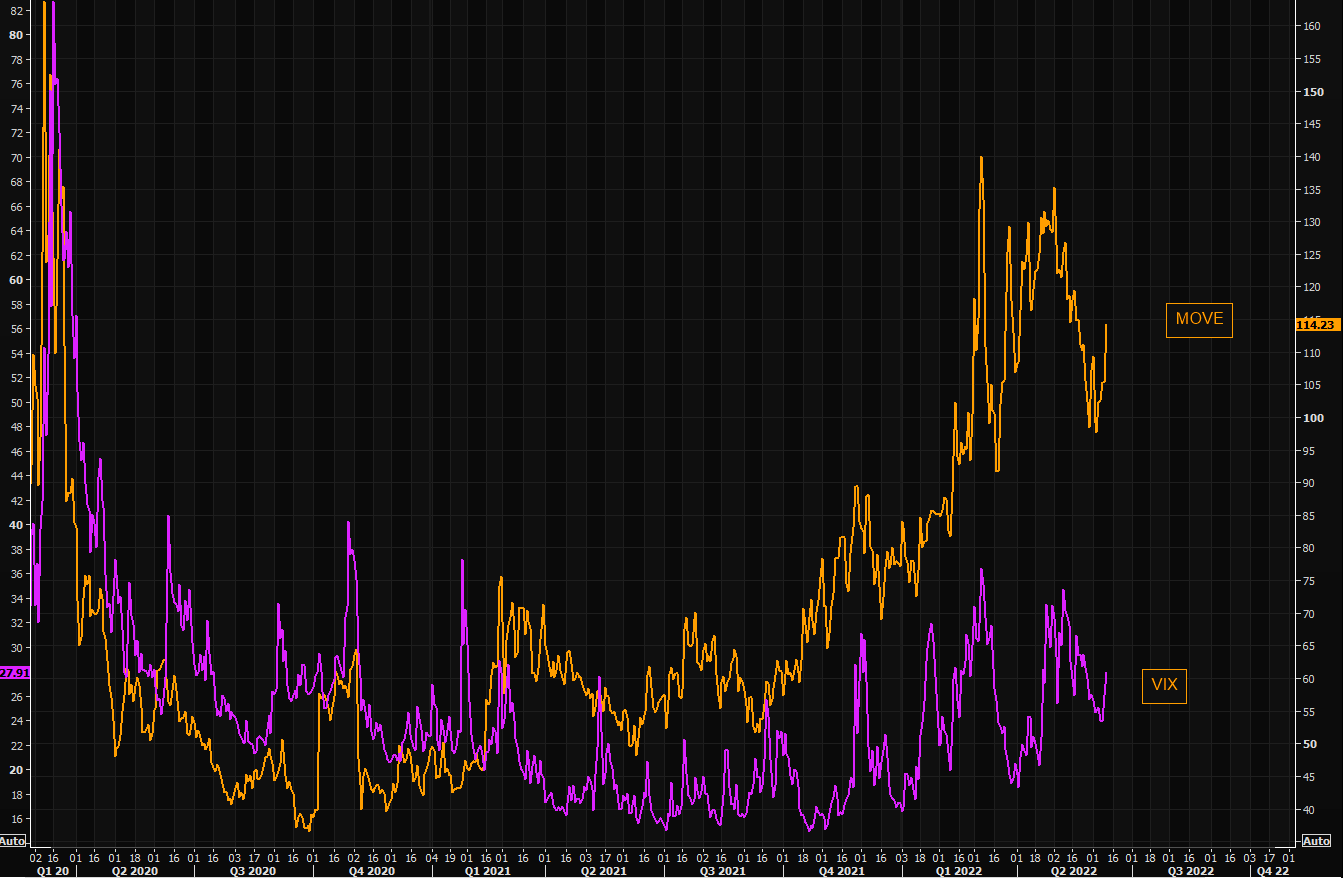 What about the rally in credit ETFs? The Market Ear tells us “The roundtrip in HYG is now gone…HYG remains a vulnerable space and SPX is looking closely. Second chart shows high yield issuance.” 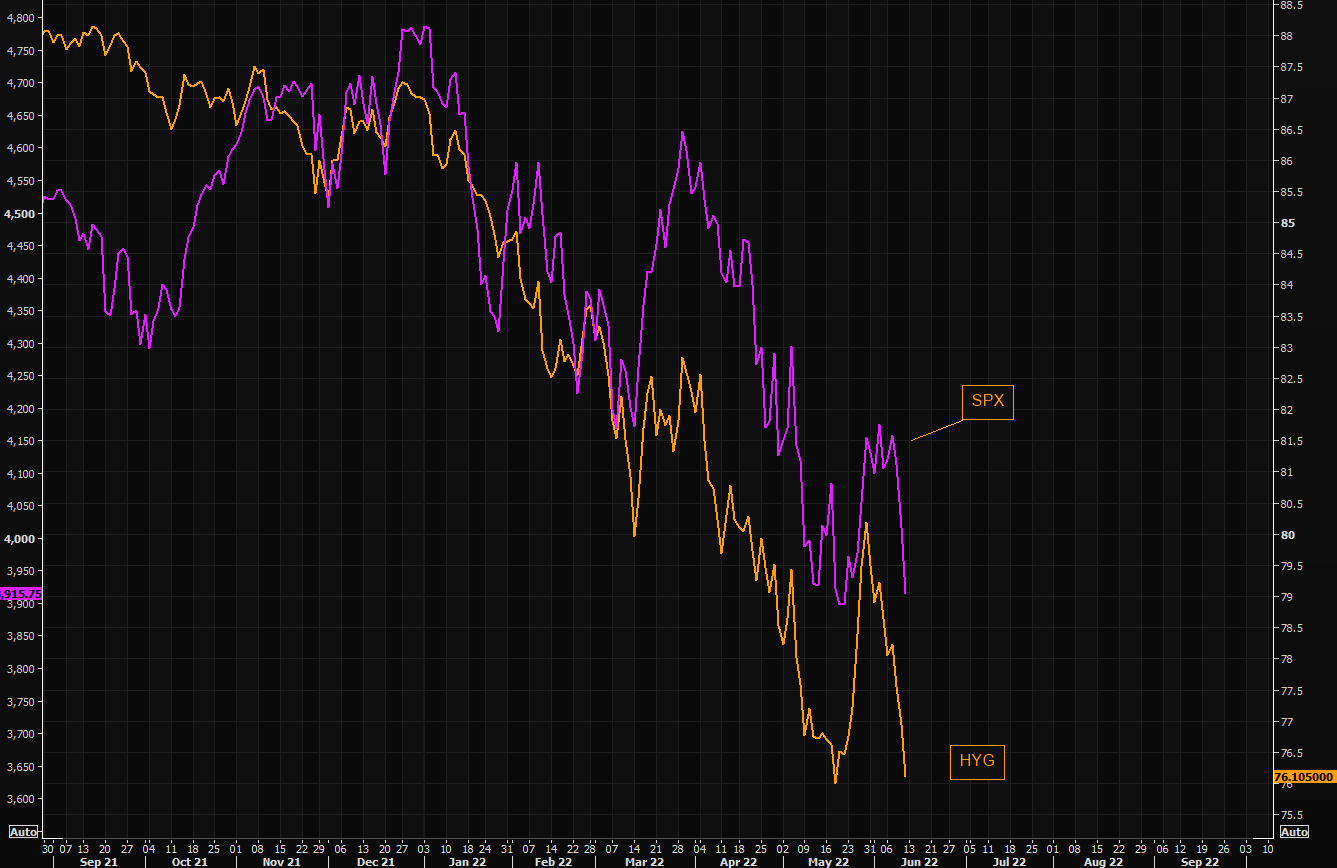 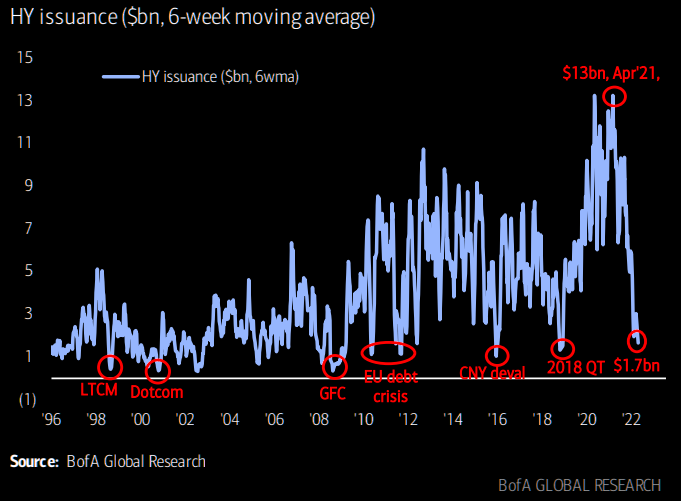 Look what happened to Treasury rates this past week:

How did the Treasury Bond ETFs perform, both standalone & in comparison to credit ETFs?

What will the ECB do in the next few months, you ask? TS Lombard calls it the “summer of revenge” and write via The Market Ear

“On the blow out of spreads the investment bank writes: “However, the problem with this cunning plan is that without a spread blowout, it will remain hard to legally justify ECB spread control as it would appear indistinguishable from deficit financing.””

So under the guise of raising rates & curtailing liquidity, the ECB plan will actually act as “deficit financing”? Naturally the Euro fell vs. the Dollar despite this “revenge” plan?

Actually it was a sort of “revenge” against America & American consumers. Because it was the ECB talk & plan that catapulted U.S. Treasury rates higher.

Eric Basmajian discussed above the concept of liquidity as it affects Real M2. What about a liquidity indicator that affects stocks?

For an excellent discussion, we urge all to read Tom McClellan’s article on June 10 titled Anemic High-Yield Bond A-D Line. A few excerpts are below:

Being simple & thinking simplistically, we hardly ever have the opportunity to feel smart. This week is no exception despite one wish of ours from last week coming true:

That’s us. Only negative prayers of ours get answered. But that is why they invented drinking on Friday evening.

Even the darlings in the commodity sector got brutalized:

How did investors treat German stocks & other international stocks in this summer of “ECB revenge”? 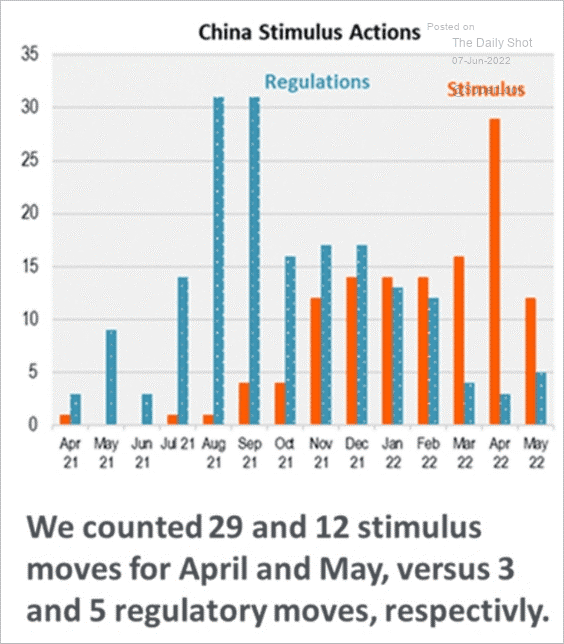 This week was so bad that anyone who came on Fin TV to articulate their views about stocks proved very wrong by Friday’s close. So the ONLY clip we feature in this article is the Friday after-the-close clip of Mark Newton on CNBC:

If buying TLT starts working, then other assets will. If TLT keeps getting clobbered, then the Inferno will get hotter. That we think will be the bottom line for the next few weeks.