We have seen this frequently since Lael Brainard essentially declared war on stock & bond rallies on April 5. We saw it again this week after a terrific 8% rally in stocks & a fall in Treasury rates. Bostic came out & took back the dovish statement he had made earlier. Weller promised more rate hikes even after achieving “neutral” rate. And Lael Brainard came out on Thursday & dismissed the notion of a Fed pause in September.

This opinion of ours & many others found emphatic support from Bloomberg Real Yield on Friday June 3:

Talk apart, what is the Fed doing?

And there is little question that the news has deteriorated hard & fast. The speed of the deterioration might be behind a “hurricane” warning from Jamie Dimon & Musk’s admission of his “super bad feeling” about the economy in a memo titled “pause all hiring worldwide“. Musk also said it might be necessary to cut 10% of jobs at Tesla.

That might not isolated to a couple of billionaires. Read what Rick Rieder of BlackRock said on BTV on Friday:

But what about the solid NFP Report? That’s where Rieder began his comments on Bloomberg Open on Friday between 9:00 am & 9:30 am:

A “negative print” in jobs added over the next 3-4 months and a Fed that continues to tighten & talk hawkishly into this decelerating trend? Perhaps that is giving Musk a “super bad feeling” about our economy & making Dimon focus on the strength of JPMorgan’s balance sheet!

Some look at this another way & say that Fed is not done until a negative payroll print: 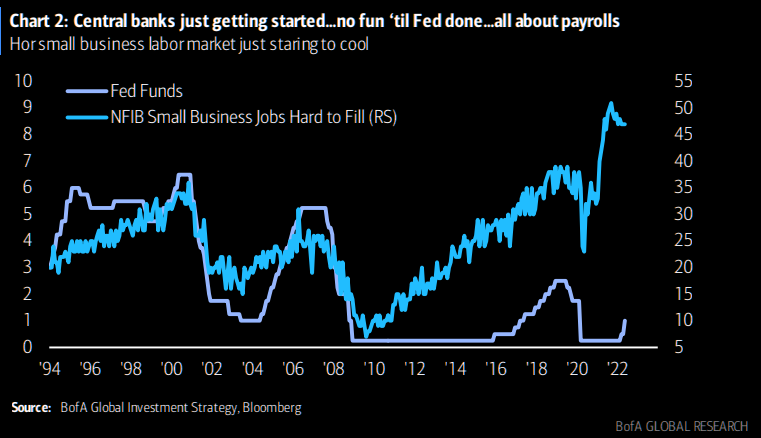 What Rieder sees as a “turn”, Rosie sees as “arrived”:

His colleague of many years mocked this call after the NFP report: 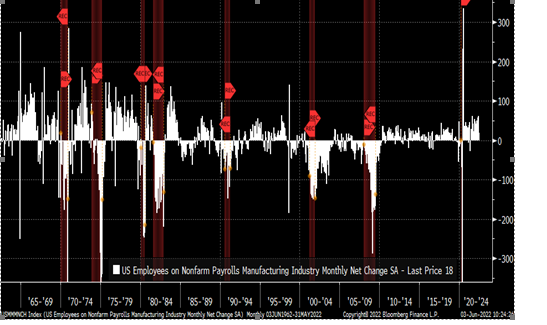 Remember the long period in which European yields, especially German low yields & then German negative yields, put downward pressure on US Treasury rates. Now the pressure is in the opposite direction. German 2-yr yield rose 31 bps this week followed by German 10-yr yield up 29 bps & German 30-yr yield up 27 bps. And the ECB is expected to raise interest rates by 25 bps or even 50 bps.

Look what the huge move up in German rates & the hawkish talk from Fed officials did this week:

With all the hawkish talk & the 10-yr already at 2.94%, the expected targets for the 10-year peak yield must be way high, right? Not really. Three different experts with different views came up with the same 25 bps range:

Is this why Bond volatility is going down? Because much of the damage is done? In more technical terms, has Fixed Income Duration already been “cleansed out” to a large extent? Notice (go up 6-7 line above) Bob Michele is saying Yes & hence he sees “more money coming into credit and adding duration to portfolios“.

That leads us to Equity Duration Cleansing:

We are actually happy that Microsoft, Apple & other equity duration stalwarts are now facing earnings downshift fears. Those who are bullish on stocks should actually pray for a violently down week & half into the May 15 FOMC meeting.

The above section makes it clear that everyone now sees an economic slowdown coming. No one knows whether it is going to be a moderate slowdown or a “technical recession” a la 1994-2011 kind OR a 2007 type deep recession. This year that will be up to the Fed and what this Fed deems to be its real mandate – to protect the economy or to protect its image. The first deals with the economy & the second is an existential risk for the Fed. We will know more about this in a week & half.

Speaking of now, “the broader backdrop” to Dubravko Lakos & the JPM team, “doesn’t suggest a full-fledged recession; it suggests at most a technical recession“. Then Dubravko clarified by saying

What might you look at if you are as “open-minded” as Dubravko? 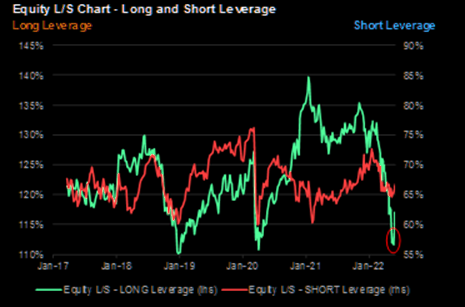 That is what Mark Newton said to Scott Wapner on CNBC Overtime after Thursday’s rally – that “lows could be in for the year“. He then added in technicalese – “lot of cycles suggest that late June is important“.

Interestingly Mike Wilson is not that far away from Dubravko. Wilson has repeated often that he is NOT calling for a secular bear market. That means he is not looking for a deep recession either. He is probably in sync with KKR’s Henry McVey who said a “transition is underway from inflation concerns to degradation in earnings“.

But there is a big difference between Dubravko & Wilson about the level of de-risking in equity positioning in the market. Dubravko & his JPM team focus on institutional or asset trading community. So they see a high level of derisking in their work. Same might be true of technicians like Mark Newton.

To Mike Wilson that is not broad enough. As he said on CNBC Fast Money agreeing to what CNBC’s Tim Seymour’s point:

Wilson said that at his 3,400-3,500 level he would get aggressive in adding risk. This is similar to David Rosenberg’s target of 3,500 and his personal statement that he would put his money in at 3,500.

So what might one do if one agrees with both Wilson & Dubravko? Follow what Rick Rieder said he is doing at BlackRock – “sell volatility 15% below from here“.  Mr. Rieder no doubt deals with highly esoteric forms of volatility trades. What might a simple investor do to at least mimic what Mr. Rieder might be doing? Wait for a really bad day in stocks & Sell January 2023 SPY 350 puts, keeping enough cash in the account to pay for buying SPY at 350. You keep the entire premium you get if SPY trades above 350 in January 2023 expiration. A more aggressive trade might be to Sell October 22 SPY 340 or 350 puts, aggressive in that you are more likely to be forced to buy SPY at 340/350 if Wilson’s target is actually realized in Q3.

Finally we point out that the famed Larry Williams called for a rally in the S&P that could last until August based on proprietary cycle work of his. Jim Cramer featured this on his Mad Money but hid all the relevant & important chart work from the clip CNBC posted for CNBC’s viewer. Guess viewers that make CNBC money from commercials are prohibited from getting even a cursory look at this important call unless they are paying up for Cramer’s for-money-only Club. Ethically rotten in our opinion.

Recall Dubrakvo’s statement about their earlier recommendation to investors to move to short duration stocks. He specified in the clip we highlighted above that Energy was their favorite short duration equity trade & added:

What about natural gas, you ask? Read & hear the man who we think embodies “simplicity” of thinking, a trait we hugely admire.  Mark Fisher is a legend, we hear, in commodities. If you could bottle the wisdom you hear in the clip below & drink it before every trade you put on, you probably would improve your trading:

Mr. Fisher also gave what he thinks would be a sure trade. Buy the dip that will occur when Russia-Ukraine war gets a ceasefire or peace…. We guess the thinking is that almost every trader will sell nat gas on that news, sell & sell hard creating a price drop that does not take into account the fundamental demand – supply imbalance… That’s only our guess, We wish Scott Wapner had asked Mr. Fisher to elaborate.

Now from one brilliant commodities mind to another across the world. Back in 1999, Mukesh Ambani’s Reliance commissioned a refinery in Jamnagar in his native Gujarat, India. With its current installed capacity of 1.24 million barrels per day, it is currently the largest refinery in the world. Juxtapose this with the statement this week of Chevron CEO that there may never be another refinery built in America.

Now ask yourselves, how asinine is EU’s public embargo on importing Russian oil while forcing Russia to sell to private refiners around the world like Reliance & then buying refined products like Diesel at much higher prices from Reliance et al?

But Indian citizens have no reason to be happy because they buy gasoline from stations owned by State-owned companies like Indian Oil that are forced to buy from existing suppliers. It is only private refiners who can buy discounted Russian oil on the open market & then export refined products to EU.

Are you surprised Reliance is up 20% this year?