Some regions have a history of creating havoc by their own internal actions & then sending destruction all over the world. For this & the last century, that region has been Europe. The First World War was destructive but the damage was to a large extent limited to Europe. The Second World War was truly a World War. It was justified within Europe as the war to end all wars.

And it ended Europe as a world power. Germany was broken up. France & Netherlands were driven out of Asia soon (in a geopolitical sense) thereafter. Even British were reduced from running an area on whom the sun never set to an island which owes its influence only as America’s special “friend” or suzerain.

2. “The End of the Beginning” for Europe?

Why was the crisis in Ukraine so utterly stupid for Europe? To answer that, you first need to ask what is Europe? Or more specifically what drives Europe’s financial strength? The answer is the Euro, the currency that every one in Europe cherishes. Even the haters of Germany in Poland, Hungary, Italy will not give up the Euro because they all remember the currency chaos that reined before Euro. That remained true even during the European financial crisis of 2011-2012.

So you would think the Europeans, especially the EU, would do everything in their power to NOT destroy the global confidence in the Euro. Sadly the Europeans are again proving their ability to cause incredible damage to themselves & to the rest of the world.

Because “the Euro has virtually collapsed“, as the veteran Gary Shilling said on Bloomberg this week. Why is the world facing so much financial turmoil? Because the currency of the second largest economic region in the World has collapsed quickly & disastrously. And that is leading people to realize, as Michael Shaoul, CEO of Marketfield Asset Management, put it on Bloomberg this past Monday:

What do you do with your holdings in a “voluntary currency” that is now in serious existential jeopardy? Unless you are suicidal stupid, you sell it to buy a stronger currency. Is this why the Euro has collapsed so fast & the Dollar has surged, as some argue?

We frankly don’t care about why? The big question after last week is whether the fall in the Euro over? One guy who studied this literally forever, used the Churchillian phrase to opine: 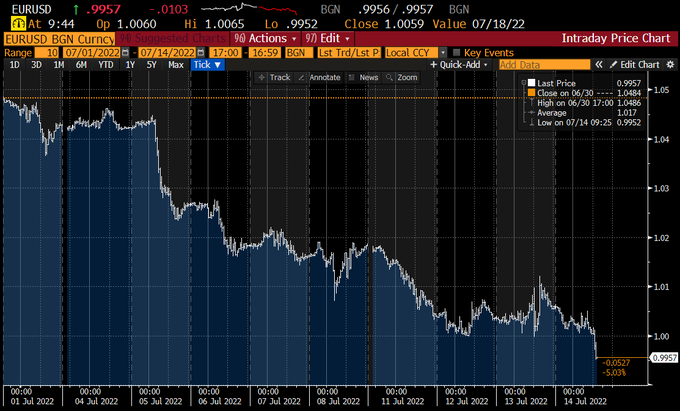 If you think that is dire, look what Robin Brooks tweeted on Sunday, July 17: 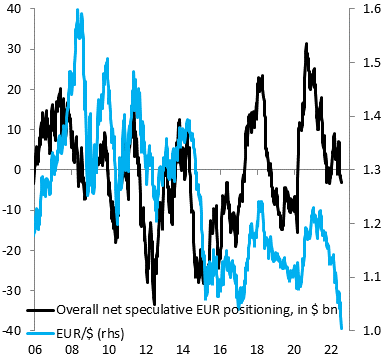 Look at how far the black line in the chart above has to fall to meet the blue line to see what might happen to the Euro. A word for caution, it is possible for the Euro/$ to rally up to meet the black line as a trade, either due to speculative traders seeing a quick opportunity or a joint Euro-US intervention.

But as Gary Shilling said this week on Bloomberg:

The Euro doesn’t have to go that far. No one wants a multi-year decline in the currency of the second largest economic region of the world. But,

The most scary alert came from Michael Shaoul this past Monday on Bloomberg:

Ask yourselves, when was the last time Europe was deemed a Systemic Risk to the World? Militarily in World War II. Now it is so financially.

Note: For coverage of what this currency crisis has meant for emerging markets, please see our adjacent article Interesting TACs of the Week (July 10 – July 16, 2022). We recognize the extent of the damage but, in our opinion, that is not Systemic for the world as the Euro crisis could be.

Think back to March 1 when Putin was described as “humiliated” in a way he had not been for decades. That was also the day Brigadier General Mark Kimmitt said the following on Bloomberg, we reported on March 4:

In that interview, as we reported on March 4, BTV’s Jonathan Ferro asked & Kimmitt replied:

If Eurasia Group said the above on March 1, where was its founder Ian Bremmer for the next 5-6 weeks? He surfaced on April 16 with the sensibly smart tweet below:

We were surprised at this tweet given Mr. Bremmer’s passion but, as we wrote on April 17,

We don’t need to tell anyone what USA has suffered since that tweet – Inflation has exploded to extreme levels, interest rates have shot up, the stock market has fallen hard from 4,500 to 3,800. And Bremmer conceded on July that Russia inches closer to taking the Donbas.

But Bremmer resolutely keeps up the fight in his Donbas article:

Bremmer is safely ensconced in Manhattan in the warm embrace of accolades from affluent left-of-center Manhattan elites who might well be spiritual descendants of “let them eat cake” Marie Antoinette. But the financial realists know what is coming: 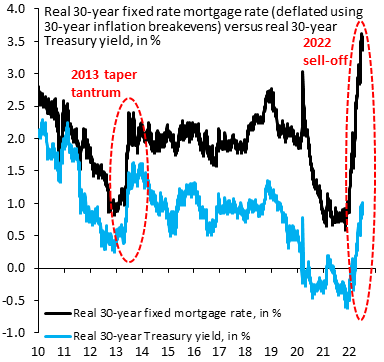 By the way, Robin Brooks might actually be as much of an insider as Bremmer. Look at his Twitter bio – Chief Economist@IIF , former Chief FX Strategist, @GoldmanSachs   & Senior Economist, @IMFnews. And Mr. Brooks is actually a defendant of the economic sanctions imposed on Russia and argues that those would have done the trick had the sanctions Not Carved out an exception for Europe buying Russian oil.

But therein lies the difference between a finance guy who must deal with markets reality & an intellectual descendant of Marie Antoinette. In that vein & because the European crisis is about natural gas, may we suggest a short one-month course for Mr. Bremmer?

How we wish Mr. Bremmer had been able to persuade President Biden to end the Ukraine war as his tweet on April 16 wished? That’s the sadness of the “if wishes were horses” proverb.

4. Financial World War – How are the global winds blowing?

In contrast, read what one of most successful & highly respected Bond investors tweeted last week:

What Bremmer & so many miss is that this World War is NOT being fought militarily anywhere except Ukraine. And it is being fought all over the World (ask Sri Lanka or Thailand if you have any doubts) in financial markets of which currencies & commodities are the spear.

To put it simply, America and Europe have weaponized currencies & ability to access their financial markets and Russia has weaponized energy & food prices and access to Russian (& now Ukrainian) commodity markets. That is why this war has to be viewed as a Financial War.

See why Europe is the most hard hit by this financial war? Nobody in the world, including Americans, want own the Euro in this mess while Europe desperately needs access to Russian energy & even food.

While Europe is at the center of the meltdown, every single country is affected by this Financial World War. The role of the Dollar as the World’s Reserve currency makes it so and the size of Russia’s ability to supply energy & food makes it so as well.

We urge all to re-read the quote from Ian Bremmer in Section 3 above. If you do, you will notice that Bremmer ONLY writes about America & Europe, or the trans-atlantic alliance.  Can’t blame Mr. Bremmer for that because that is both the center & horizon for the Manhattan elite.

If Mr. Bremmer thinks back to pre-2008 world, he might recall a term that was quite popular then. Now all of a sudden, BRICS is back in the limelight, the World’s limelight. Look at Geopolitical Futures reported this week:

Brazil & Russia have been around for a long time & both are founding members of BRICS. Their sudden agreement is a direct consequence of this Financial World War and the desire of most nations (except EU) to not get caught on one side or or the other. And why should India & Russia go through the U.S. Dollar to buy each other’s products & services?

If that wasn’t enough, wonder what Saudi Arabia is doing now that the Biden visit is behind them? Saudi Arabia is reportedly preparing to apply formally for membership in BRICS. After all, China & India are very large customers of Saudi Arabia and Russia-Saudi Arabia carry the casting share of OPEC.

We think research commentaries like ING’s BRICS: The new name in reserve currencies are pipe-dreams. But there is no doubt that BRICS might benefit from this Financial World War by becoming a trade-hub in local currencies. That, by itself, might end up being a win for Putin’s Russia, something Bremmer’s trans-Atlantic blinkers prevent him from noticing.

If you really want to go nuts, think of a country that is financially very dependent on selling automobiles & industrial goods to China & is simultaneously very dependent on Russia for energy, especially natural gas. Can you even imagine Germany applying for membership in BRICS and that too with Deutsche Mark as its BRICS currency to avoid EU sanctions? Stranger things have happened & all leaders must do what it takes for their country to survive & prosper, right?

Already we see the U.S. Congress taking sensible steps to prevent collateral damage to countries they deem important, perhaps such as India which is extremely central to Indo-Pacific (USA, Australia, Japan & India) and important to I2U2 (India-Israel-USA-UAE);

Already India prevented the recent BRICS summit in China from adopting an anti-US tone that Russia wanted. Think about it – India does not want BRICS to be anti-American & neither do South Africa & Brazil. Russia itself wants support from India to prevent itself from being deemed in China’s orbit. Frankly, addition of Saudi Arabia would be an asset in making BRICS focused on trade vs. geopolitics.

No one knows what will happen in the next few years but it seems clear that this Financial World War is going to re-write the map of the world, first financially & as a result geopolitically. One big question is what happens to Europe?