1.Next Week, Next Month?

Look at this past week:

And corporate earnings news was bad, bordering on horrible led by FedEx. Shouldn’t interest rates, especially at the long end of the Treasury curve, have come down hard? They didn’t. Yes, short term rates rose hard & fast leading to an even more inverted curve.

What gives? Is the Fed’s out-of-sight sleeve gun firing? It seems so to us. Witness the comments on FinTV about poor & worsening Treasury market liquidity! So the stage seems set from what Scott Minerd warned a week & half ago & what the more sedate Michael Hartnett of BAML reportedly wrote this week:

Purists might welcome that and so would many many traders who are short and, like Larry Williams, see a “significant intermediate term low” ahead and then “Up, Up & Away“.

On the other hand, ask whether the Fed might take steps to prevent such a political disaster? We seriously doubt that. Remember the same Powellard trading ZLC has already shown a super-DeMarkian ability to  reverse peaking trends. But, as many say, reversing what has been priced in about rate hikes could be a credibility disaster.

So what’s this trading outfit to do? Simple, we think. Raise rates by 75 bps on Wednesday, maintain a strong vigilant data-dependent verbal stance AND very softly (or quietly) postpone QT to January 2023 citing, if asked, the problems with year-end liquidity pressures.

We suspect that would create a bounce in the S&P coming out of the FOMC & Powell’s Presser. And the stage might already have been set according to gamma-folks:

Does VIX have anything to say about this? VIX by itself doesn’t seem to but the VIX Spread seems to: 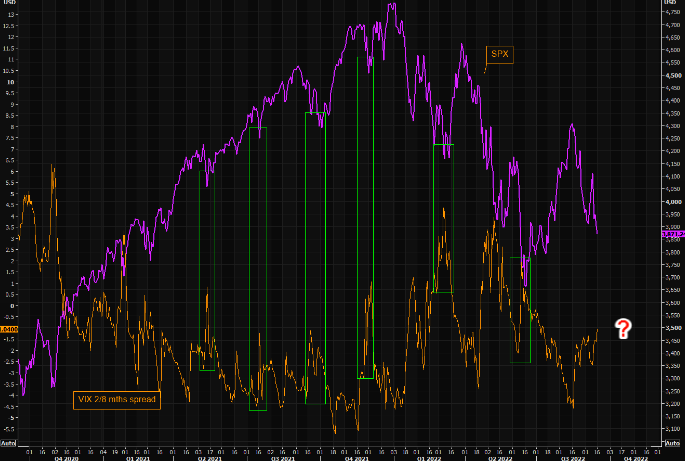 We cannot help looking back to a precedent when there was confusion about whether the problems in the economy & housing would lead to a recession. Going into that October, there were worries about the damage October would inflict on the stock market. Instead, thanks to a less than tough Chairman Bernanke, the S&P made a high for 2007 in October before rolling over in November as bad economic news overrode optimism.

The Powell Fed does not need to get dovish next Wednesday. They can wax eloquent about their determination to stamp out high inflation by raising 75 bps and promising to raise rates no matter what it takes (but mentioning the data dependency caveat).

A rally in stocks in October would minimize the risk of a confidence-killing stock market crash at least until the November 2022 election. The Fed owes that to the nation and, of course, to the sitting Congress.

A more detailed & positive view of inflation ahead & what yields might be suggesting was laid out by the renowned Larry Williams a week ago in this clearly-titled clip Down, Then Up, Up & Away:

Going back to 2007, wasn’t that mainly triggered by housing? And wasn’t that a far more serious & public matter than the much smaller community that holds stocks? So isn’t it sort of cavalier of us to throw out 2007 references?

That might well be so. But we are simple-minded and we tend to remember what we heard, like the analogy made by Dominic Konstam on Bloomberg Surveillance on May 6 – that in 2007 it was housing that severely affected the stock market and in 2022 it is the stock market that could severely affect housing. We recalled that when we heard Barry Sternlicht use phrases like “crash of unprecedented proportions in the housing market” & “the economy is breaking hard“:

The answer is QT. And that doesn’t address inflation. It simply attacks asset prices & may actually lead to  economic contraction. It also may provide a short term way to play the politics of inflation (as Central Banks have been playing) vs. focusing on the economics of inflation, as Wei Li of BlackRock laid out on Bloomberg Surveillance this week.

We were supporters of Chairman Powell’s “transitory” concept earlier this year because we believed that the soundest course of monetary policy was to tolerate higher levels of inflation. That would have worked, we still believe. But possibility was destroyed by the war in Ukraine, more specifically with the monetary & economic sanctions imposed on Russia. Russia, in turn, weaponized its energy reserves causing severe price explosions in energy & everything derived from energy.

The damage to the global economy has been massive. And the intensity of consumer anger drove the politics of inflation to the forefront. While that looks like it is abating, we wonder whether the economic damage will last longer & be deeper than most accept. And that doesn’t include the enormous damage that would result if the Fed is really serious about driving inflation to 2%. Wei Li of BlackRock detailed their estimates of the damage at Bloomberg Surveillance:

And that is in America. Forget what that would do to Europe & Emerging Markets. If it gets that bad, then we might see a re-enactment on 2008 with Treasury Bonds doing fantastic. If we see a slowdown or a mild recession, then credit might do very well & better than Treasury bonds. That is why Jeffrey Gundlach said in his webcast that “The capital gains potential is the best in the last 15 years… Bonds are the place to be“.

That might change if the S&P drops to 3,020 in a month, as Hartnett of BAML reportedly said. At that level, even a confirmed recessionist like David Rosenberg has said he will come out of the bear cave & become a bull.

We heard Stanley Druckenmiller say that “this is the craziest environment” he has “ever encountered” and added “odds of a global recession & a change in the macro economy is as high & severe as I have seen in decades“. If he thinks this is a crazy environment, then it must be .

So we will simply wait to get some clarity this week from Chairman Powell & let the markets tell us how to think about the intermediate term, especially FX & Bond markets. Because those markets have shown the most volatility, while VIX has been relatively subdued.