That is essentially what the British Central Bank did on Wednesday, September 28. They reversed their QT to a new & rapid QE by buying British Gilts to stabilize the disaster unfolding at the British Pension system. And it worked better than what Draghi ever delivered in a single day. The yield of the 30-year British Gilt plunged by 106 bps on Wednesday. Has any one ever seen anything remotely approaching this?

The 106 bps fall in yield raised the price of British Gilts substantially &, at least for this week, stemmed the margin crisis in the British Pension system. The British pound paid for it but Liz Truss, the British PM, remained unfazed and reiterated her determination to cut taxes on Friday morning.

So have the margin calls been met & is the problem behind them? 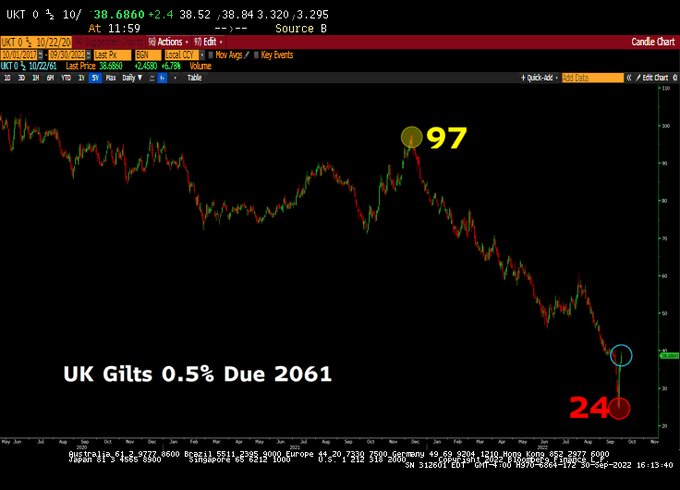 While Mr. McDonald did not use scary words, Mr. Robin Brooks of IIF did: 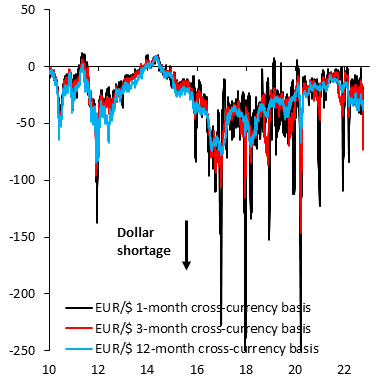 Can the Euro see funding pressures without affecting the global financial system?

We guess Liz Truss & her team have never heard of John Madden, but we hope Jay Powell & his band might be aware of who Madden was. If they are, then they should re-learn his “speed kills” dictum. Markets move with far greater speed than policy impact. And this speed leads to reduction or disappearance of liquidity leading to worse disaster just as the “shouting fire in a crowded theater” phrase warns.

But Powell is not an academic. That shows how so-called independent outsiders get eventually sucked in by the huge bureaucracy filled with several hundred Ph.D.s. What an atrociously dangerous move to inject $95 billion per month of QT into this rocket-like spike in interest rates? Impact of rate hikes takes time to be felt, as smart guys tell us. But QT is a direct artillery hit on asset prices. And doing that in this size & speed creates a UK like accident.

On the other hand has the UK near miss created at least some fear into the know-it-all Fed brain trust?

But isn’t institutional “credibility” of paramount importance to every institution, especially to the Federal Reserve? Wouldn’t they need an “accident” or a “near accident” of such scale that all Americans get zapped with fear? Then the Fed can run to the rescue of America as Bernanke did in 2008-2009!

Remember David Rosenberg’s tweet of September 24 saying “We could be building towards an Oct/87 crash, led by an aggressive Fed & surging bond yields“! How many remember how badly the stock market closed on Friday October 16, 1987? Sort of like the close this Friday, September 30:

Did Friday’s close remind a smart manager to hark back to October 87?

Of course, the Fed & all powers that are have to be watching this ready to step in to avoid the deluge. This might be why we might see this disastrous broth remain percolating for awhile without coming to a fast boil.

Stock market crashes are scary & cause serious damage. But they are not as systemic as crashes in credit or bonds-currencies. Those who are fearful of Treasury yields shooting up from here might take some comfort from what Komal Sri Kumar said to CNBC’s Joe Kernen on Wednesday. He had predicted on January 5, 2021 after the Georgia Senate Race that Treasury yields will go up. This past Wednesday, he changed his opinion. Watch-listen to his reasoning:

Too many people on TV argue that US markets are independent of what happens in Europe. Mr. Sri Kumar disagrees & our experience suggests he is right. We have also noticed that the open in NY markets is influenced much more by how European markets are behaving rather than the previous close in New York.  Perhaps one reason is below: 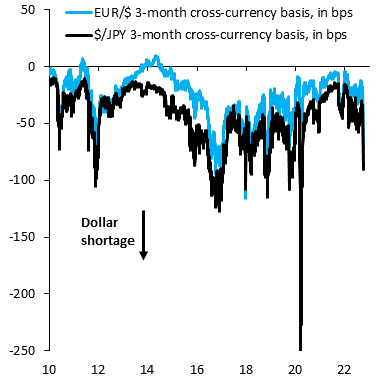 Europe remains a huge economic region & its impact on American economy & U.S. companies is sizable. What about the 3rd largest economic region in the world? Is that in any position to help the U.S. economy? Watch-listen to what Jim Chanos said at CNBC’s Delivering Alpha:

Finally, a look into 2023 from the viewpoint of someone who has been extraordinarily successful for decades – Stanley Druckenmiller with CNBC’s Joe Kernen:

Following Mark Fisher on CNBC Half Time, we wondered last week about the possibility of a Russia-Ukraine-EU ceasefire blessed silently by America. Two things now suggest it is not even worth the speculation. First is the attack on NordStream pipelines in the Baltic Sea. Second is an analysis of further mobilization of troops by Russia & Ukraine in this week’s article by Geopolitical Futures titled Russia’s Mobilization May Be a Game-Changer. Key excerpts are below:

Does this support Druckenmiller’s forecast of a hard landing by the end of 2023? It certainly does not negate it!