Frankly, we have no idea what Dr. Yellen delivered. We did not hear anything materially different in her statement, prepared comments or in her answers. She did come across as confident and in control, both intellectually and in presence. The confidence & poise she delivered may have been a slight unpleasant surprise for markets which have been groupies of the soft, dovish Yellen portrait. May be that is why they all got so spooked on Wednesday afternoon.

But action in a couple of areas was intense. Money center banks rallied hard, Brazil & Mexico rallied  and the belly of the Treasury curve exploded. In fact, Brazil’s Bovespa rallied all 5 days this week, and was up 5.5% on the week until the sell-off on Friday afternoon. The 5-year & 3-year yields rocketed higher to close up 13 bps fro their Friday levels. Surely, the vicious sell-off in interest rates should have been negative for emerging markets as weak as Brazil & Mexico.

Perhaps the answer is simple. The Yellen composure made large institutions lose their composure and they took their positions down. Large institutions that had taken refuge in the belly of the Treasury curve were definitely spooked by the threat of earlier than expected interest rate normalization. That explains the vertical lift-off of 16 bps on Wednesday afternoon. But what about the rally in Brazil, Mexico? As Elliott Wave pointed out mid-week, these two markets were at the bottom of a long channel and poised to rally. So all the heavy action could have been nothing but position unwinding.

In the classic the dog didn’t bark manner, the 30-year Treasury yield actually fell by 5 bps from its pre-Fed level while the 5-year yield exploded up.  The Santellian manner of describing this was:

It would be interesting to see how the 3-7 year yields hold up in the couple of weeks ahead. What about the long end? Santelli explained

A similar explanation is offered by Abigail Doolittle in her article 10-year yield is the Tell:

An emphatic if simpler statement was the tweet from Keith McCullough of HedgEye on Friday afternoon:

What about the flattening of the yield curve?

That may be the key to the outperformance of the 30-year Treasury – the finest indicator of inflation. Guy Adami of CNBC FM has said that the action in Treasury yields seems to be suggesting deflation ahead. This week GaveKal Capital voiced the same concerns in their article Deflation Storm Clouds. The charts in that article are interesting and lead GaveKal to remark:

Of course, all these concerns can be wiped out by a strong payroll number on April 4 as  Paul Richards of UBS said on CNBC FM-1/2 on Friday:

The payroll number is still two weeks away. The bond market will weigh each piece of data till then and get positioned for that huge
number.

The best call of last week was by Paul Richards of UBS who exhorted CNBC FM viewers to get long risk last weekend. What did he say this Friday?

Ralph Acampora was cautious with Maria Bartiromo on FBN on Monday, March 17:

Cramer’s concern about froth and the overall concern about investors being “all-in” is best described by the charts from Elliottwave International article titled 13 Eye-Opening Finance and Economics Charts You Will Not See in the News: Getting to interesting tweets, the first is binary: 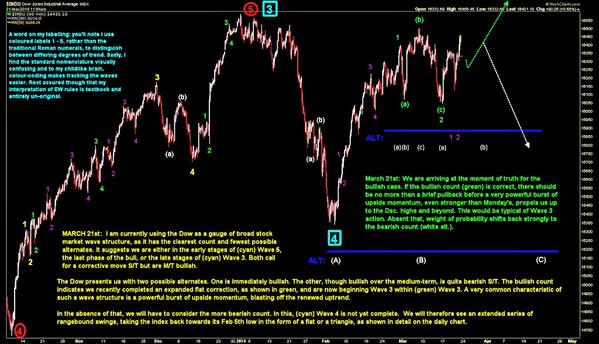 Last week, Jeff Cooper wondered whether that action marked a top. He tweeted a similar thought on Friday:

Cooper also wrote about a turning point in March in a free article on Minyanville.com:

This turned out to be the worst week for Gold in 2014. GLD fell by 4% this week while miner ETFs GDX & GDXJ fell by 9%. So kudos to three tweeters who advised getting out on Friday, March 14 – @Convertbond, @JeffCooperLive & @Vconomics.

Carter Worth, resident technician of CNBC Options Action, didn’t have to play Hamlet on Friday:

No one beats Tom McClellan in discussing seemingly irrelevant but empirically interesting correlations. Read his latest title Gold Bugs Cheer The Rain. His chart doesn’t tell the story as poetically as he does:

Last week, we discussed a far out scenario that might appear tempting to Putin if US-EU sanctions end up damaging Russian economy. That scenario was:

This week we found that this far out scenario was considered as remote but likely by GaveKal. Below are quick excerpts from an article by Louis Vincent Gave via the e-letter of John Mauldin:

A direct conflict between Iran & Saudi Arabia is very unlikely. The stakes are so huge that everyone will have to get in. So it is likely that, if it came to that, these two would first fight a proxy war in Bahrain. Look at the current proxy war being waged in Syria by Iran & Saudi Arabia backed by Russia & USA resp. Look how horrible that is in human terms. A proxy war in Bahrain that is 10% as brutal would take Oil to about $125 a barrel. That is far better than the $200 target discussed by GaveKal from any direct clash between Iran and Saudi Arabia.

This is the time for US-EU and Russia, especially the US, to shout & threaten to act in a semi-theatrical manner and then slowly take the volume down. That is assuming President Obama does not give in to the fever gripping both right-wing neocons and left-wing HR interventionists.

There is probably no one combines investing and entertainment as Marc Faber, the editor of the Gloom, Boom & Doom report. The detailed summary below is courtesy of Bloomberg TV PR.

MATT MILLER: Hang on. So Marc, are you calling for a Chinese report of 4 percent or are you saying it’s more realistic that we’ll see 4 percent and the Chinese will come out with a report or their own numbers that are closer to the 7, 7.5 that’s expected?

REGAN: Yeah, and if you’re China, you’ve got some muscle there to count what you want. But at the end of the day, investors, they have a tendency to see through these things. Marc Faber, do you believe investors are seeing through this? Have they disc
ounted China enough in your view?

REGAN: Let’s talk about what’s going on over in eastern Europe right now as we watch Vladimir Putin take over Crimea. How – how big might this get in your view and how should investors be thinking about Europe right now as a result of these moves from Putin?

REGAN: I’m sorry. He did the right thing at the right time. What do you mean by that, Marc?

REGAN: So he – he needed to save his warm water ports? He went in and took over this region, which you see as a logical political move. I guess the big question is is he going to do more.