Summary – A top-down review of interesting calls and comments made last week about monetary policy, economics, stocks, bonds & commodities. This week, we review the Federal Reserve meeting, Russia-Ukraine situation & the decline in the stock market. TACs is our acronym for Tweets, Articles, & Clips – our basic inputs for this article.

Thursday came seemingly out of the blue. What caused the 2% fall in major stock indices on Thursday? Was it the hawkish-sounding statement of the Fed on top of strong data? Or was it the fear of the impact of US sanctions on German, European companies, & more broadly on global trade? Had it been the latter, then Treasuries and Gold should have rallied on Thursday as stocks cratered. Had it been the Fed, then stocks should have rallied on Friday after the non-hot NFP number.

Perhaps, it was a classic stampede of a cattle herd on Thursday, as Mark Grant of Southwestern Securities put it on Friday morning on CNBC Squawk Box. Perhaps, it was that proverbial last straw on the camel’s back, what is described in Complexity Theory as the snowflake that finally causes the avalanche. The stock market system has been getting into a “critical state” for weeks, with divergences building, with Russell 2000 making a double top & giving way, with high-yield bonds getting sold off, with breadth deteriorating badly.  The stage was set for a sharp fall and it happened on Thursday.

Is this decline the real thing, a serious correction? Or is it just a passing storm like many we have seen since August 2012? The first sign will be whether Friday’s deeply oversold condition of the S&P is a “good oversold” that leads to a meaningful bounce or a “bad oversold” which just gets worse.

This is definitely a major concern of the stock market. The rally in stocks off the bottom on Friday came as word of the Obama-Putin phone call came through. The Cognoscenti tweet-wrote their views on Friday:

Some worried about much more than financial impact of sanctions:

This was a succinct summary of McDonald’s comments on CNBC Closing Bell on Thursday afternoon:

When we have questions about Eastern Europe, we turn to a man who has forgotten more than we would ever know, George Friedman of Stratfor:

No wonder stocks rallied when news of a Obama-Putin jaw-jaw was released on Friday.

The 3-year & 2-year yields closed at 1.02% & 56 bps post-Fed on Wednesday compared to 77 bps & 39 bps on December 31, 2013. In contrast, yields across the 30-5 year curve are well below their 12/31/2013 closing levels – with 30-yr yield down by 69 bps. This is the ytd reality despite all the Fed-head talk and expert opinions. This week’s reality is that the vertical rise in yields on Wednesday was nullified by a huge bull-steepening fall in yields on Friday. So this week might end up as just noise.

This is why we don’t really worry about which guru thinks the Fed was hawkish or which guru thinks the Fed was dovish. Gun to our head, we would say that the members of the FOMC are divided & confused about whether the economy will keep gaining strength or whether Q2 GDP might prove to be the peak for 2014. With multiple guns to our head, we would state our conviction that Chair Yellen is worried about her tightening actually causing a contraction in the economy and so she plans to keep rates at current levels until she is absolutely forced to raise them.

We really don’t know whether the 10-year will get to 2% as Mark Grant of Southwestern Securities said on Friday morning or end the year at 3% as Ira Harris of Credit Suisse said on Friday afternoon. So we let the Treasury market do price discovery for us, subject to Santelli’s 2.44%-2.66% range. . 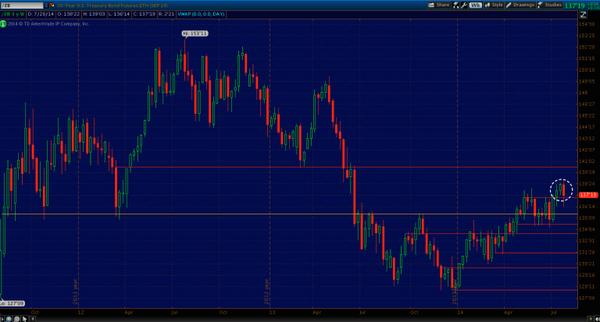 The biggest bullish factor for U.S. Treasuries is the ugly action in the High Yield bond market. .

We get valuation correction but this ugliness is pointing to some ugly swampland in the economic landscape. The story is the same in European High yield credit: 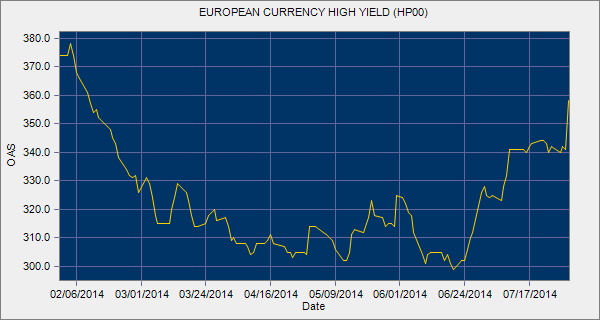 To those who think the action in High Yield & European High Yield is like 2008, Rich Bernstein said on Friday morning:

On Monday, Ryan Detrick warned us in his article Here Comes August, Get Ready:

What did Detrick tweet-write on Friday? Others seem to concur:

Lawrence McMillan turned negative with the break of his support levels:

So how far could stocks fall? Mark Hulbert’s article says 20% based on simultaneous flashing of 3 signals:

Tom McClellan discusses a composite indicator he found recently and explains why he found it scary.

It was hard to find a trader or guru who said buy stocks, except: 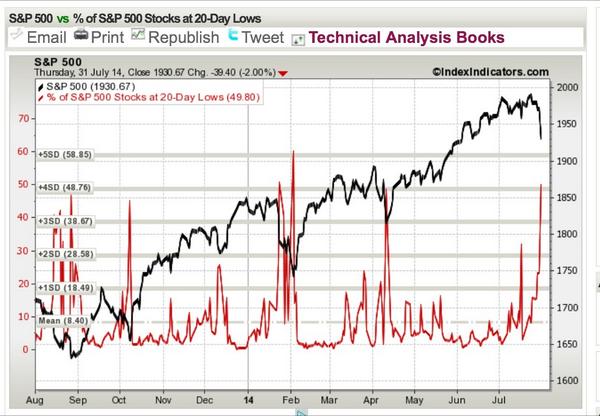 Empirically speaking, when we find it hard to find/include a bullish stance, the stock market rallies the following week. Will this pattern hold next week?

Both precious metals & Oil acted badly this week. Was it simply the strength in the U.S. Dollar? Silver acted really badly on Friday when compared to Gold: 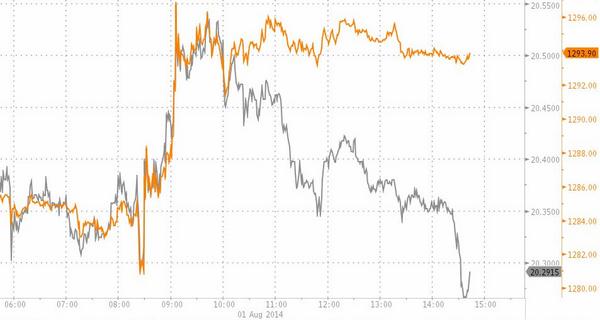