1.  “at a level previously thought unthinkable“

said Jeffrey Gundlach this week about his biggest surprise of 2015*:

If it comes true, this will be a major event for the economy & markets. We recall Barton Biggs describing an ‘Ice” scenario in late 1990 that had 3-month T-bills falling to 3% within a couple of years. That was when the yield curve had flattened just above 9%. At that time, a 3% T-bill was dismissed as laughable. Three years later, the 3-month T-bill did fall to 3%. That was a major bull-steepening move & not a flattening. The yield curve flattened around 5.25% in June 2007 and we know what happened afterwards. So a flat yield curve is a bad thing that often leads to a recession or a serious slowdown.

So for the yield curve to flatten in 2015, short rates have to rise in 2015. To what? 2%, 2.5%? Very few are calling for the Fed to raise rates with such clarity as to send the 2-year yield up by 200 bps. So that suggests, the 10-year & 30-year yields have to come down to say 2%. The only way the treasury curve flattens at 2% or below is what we have been dreading for awhile – that the Fed makes a mistake and longer maturities viciously trade down in yield in response.

Gundlach concurs & adds why, in his opinion, there aren’t any fundamental reasons for the Fed to raise rates next year:

So what then could persuade the Fed to raise rates according to Gundlach?

But that is very different than raising the rates to 2%. So for Gundlach’s call to come true in 2015, the 10-year has to fall to about 1.5%, right? Frankly, we don’t believe Chair Yellen will gamble on raising rates hard in 2015. What might happen is that short rates might rise on a growth spike in 1st half of 2015 and the 10-5 year spread could narrow to 25-50 bps or so – a semi-flattening if you will.

We got a taste of how bonds can react to stronger economic data after a stronger than expected 3.9% print on Q3 GDP on Tuesday:

But what if the economy is not that strong?

So either way, bond yields fall? That doesn’t happen unless positioning needs to unscramble.

Rick Santelli said “Treasurys love ‘short shorts’” and explained why the 10-year yield could drop to the pivotal 2.14% yield by year-end. The 10-year closed at 2.17% on Friday. So only 3 bps to go for Santell’s forecast to come true.

* The most important line in Gundlach’s commentary & CNBC.com webmasters dropped it from their clips. Another reason how CNBC keeps failing its readers. Their mandate is short videoclips & they don’t care whether their clips omit critical comments.

Not ours at all.And yes, the tweet below did come with a photo of Sean Connery as Bond.

You can’t argue that Long Bond has been the winner this week and this year. Recall Santelli talking about the Treasury flash crash of October 15 and now ponder the reality that Friday’s close of 30-year Treasury yield at 2.898% has already fallen below the close on Wednesday, October 15, of 2.92%. The rest of the on-the-run treasury curve is still above the close on October 15th. The 5-year yield is still 15 bps higher than the 10/15 close, for example. So the 30-year bond is the champ:

Next comes the payroll report.

David Rosenberg talked about a soft patch in Q4 & 200K payroll number. In the other corner we have, Ian Shepherdson on CNBC Closing Bell on Tuesday:

At the other extreme, we have: 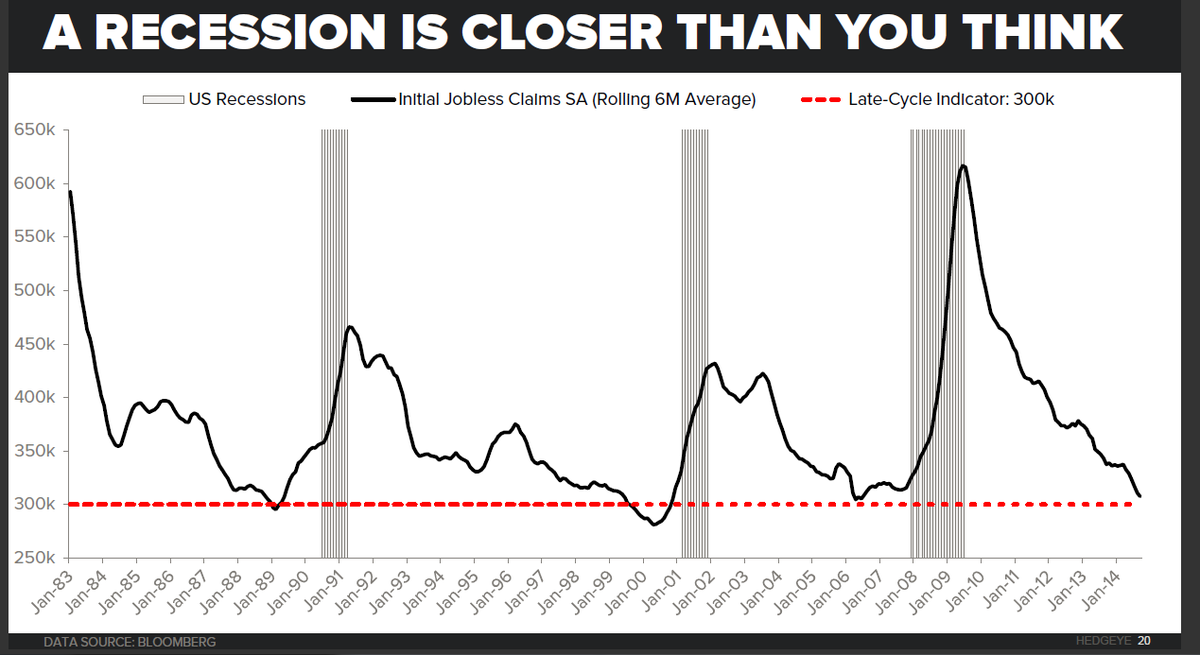 You don’t need a recession for a fall in Treasury yields. A fear of contagion can suffice:

Silly us. We actually wondered last week whether EM would lead the beta-chase to year-end. Instead EEM fell by 1% this week. Oil & commodities collapsed on Friday & commodity EM markets from Brazil to South Korea to South Africa dropped by 3% or more.

Normally, fall in Treasury yields is bullish for EM Debt. But not on Friday. The EM debt ETFs, both sovereign & high yield, fell sharply in price while the 30-year Treasury rallied by 1% or so. Is this an EM-version of Larry McDonald’s canary in the coal mine (see section 3 above)?

Oil fell by 10% from Wednesday to Friday – that’s not just OPEC’s refusal to cut. It simply says that the world is awash in oil and that OPEC led by Saudi Arabia is going to take down oil prices to hurt competitors. Remember that can only happen in a slowing economy. Rick Santelli is probably right in his prediction about “permanently bending the cost of energy” but that good news is for the future. Today’s reality seems really bad for EM.

And Europe that should benefit big is acting badly. European bond markets are literally screaming deflation. The German 10-year closed at 70 bps for the first time ever. And: 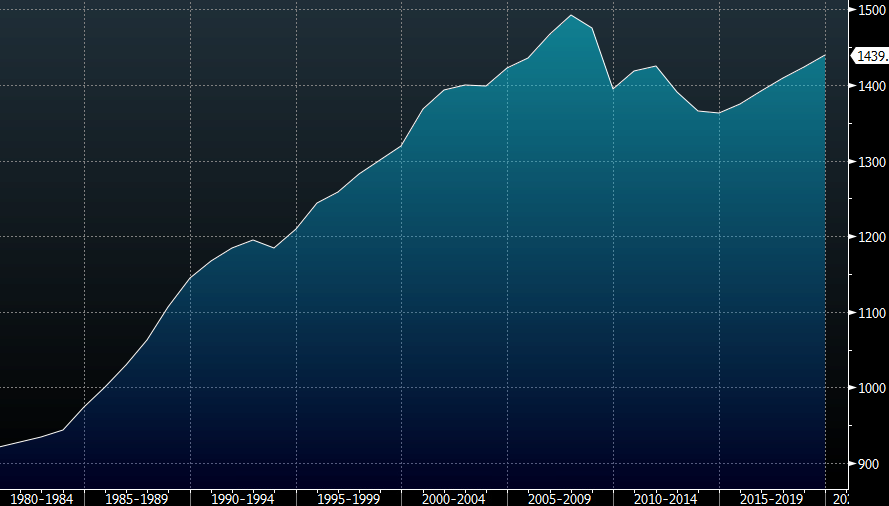 Does this force Draghi’s hand this Thursday? Will it be bullish if Draghi announces additional buying of corporate/asset-backed bonds or even sovereign bonds? One skeptic voice: 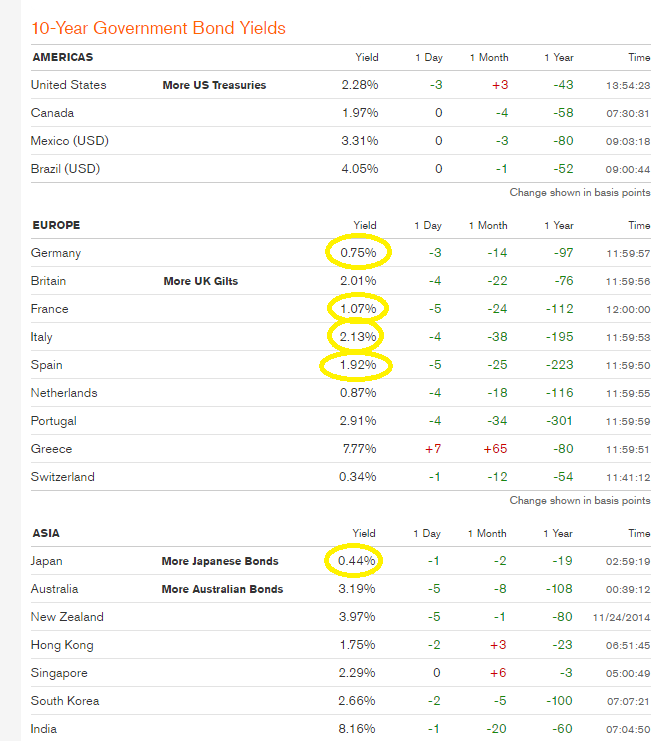 The leading developed market in the world was placid this week. The outlier was the 1.5% fall in RUT on Friday – just a part of the growth scare? The other curious action was the rally in European banks versus a decline in US mega banks. The regional bank ETF was down almost 2%. Next week should be less placid with Draghi & payrolls.

This week Dana Lyons amplified the view Chad Gassaway had expressed last week about big gaps at the open in US indices: The major event is the Swiss Referendum on Sunday. Assuming it fails, the real test of seasonality described above will come next week. Friday’s action was scary enough – GLD fell by 2.6% & SLV by 6.5%. And gold miners fell more than Oil ETFs – GDX fell 8.7% & GDXJ fell 12% on Friday. Perhaps, people were getting out of the way after seeing how Oil & Energy stocks fell.

On the other hand, a big sell off could be a buying opportunity. Tom McClellan discusses an interesting indicator for Gold on Thanksgiving day in his GOFO Squeeze article: