The U.S. Economy printed a whopping 5.0% Q3GDP this Tuesday. Treasury yields rose by 10 bps on Tuesday at the longer end & the 30-5 curve steepened by 3 bps. The 5-year note auction was disappointing and rated “D” by Rick Santelli. So far so sensible. The Jobless claims number came in stronger on Wednesday morning and Treasury yields rose again. Sensible again. Then came a disappointing 7-year auction on that early close Wednesday. Makes sense right?

(5-minute chart of TLT for the week)

Then came the stunner. Long-duration Treasuries began rallying after that auction and closed positive on the highs of the day on high volume. And the curve flattened on the day. The rally continued on Friday and so did the flattening. The 30-5 year curve closed at 106 bps on Friday, a full 5 bps flatter on the week.

The last time we saw this was after the 6.9% growth in October 2003. We recall how Larry Kudlow & Michael Darda proclaimed this number as evidence of a strong economy and predicted a rout in 10-year yields. It didn’t happen then and it is not happening now.

All that is right but still – why couldn’t Treasuries this week with that stunningly strong data? Is this basically Europe or does the bond market smell something about the U.S. economic recovery? Greenspan did begin tightening 6 months after the Q3 2003 GDP and Chair Yellen seems focused on raising rates in Q2-Q3 2015. It took another 2 years before the yield curve flattened around 5%-5.50% in June 2006. When does today’s yield curve flatten & at what level? Gundlach is already on record with his prediction for a flattening in 2015 “at a level previously thought unthinkable“.

The Russell 2000 has been the star of this move from December 16.  This week, it closed above its March 2014 high for the first time. Chad Gassaway discussed the small-caps on Monday in his article The Technicals, Sentiment, and Seasonality Heading Into 2015.

So. where could the S&P go in this run?

Small-caps “beginning” a rally, IWM outperforming SPY, risk re-entering the market at these levels – doesn’t it seem like 1999? That’s what David Tepper wondered this week:

Remember, Greenspan began tightening in 1999 but did it so slowly that the markets ignored him in 1999. We expect Chair Yellen to raise rates slowly if at all in 1999. So we could have QE in Europe, inexpensive oil, a Fed that will tip toe into a tightening. the 3rd year of the Presidential cycle, an year that ends in 5 – so Tepper could prove right about a 1999-type 2015, especially the individual investors come in with both hands in 2015.

On the other hand, David Rosenberg wrote on Wednesday:

Mark Fisher, the veteran commodities trader, was smart, interesting & gave some outlier ideas on CNBC FM 1/2 that could pay off big, if they work out: 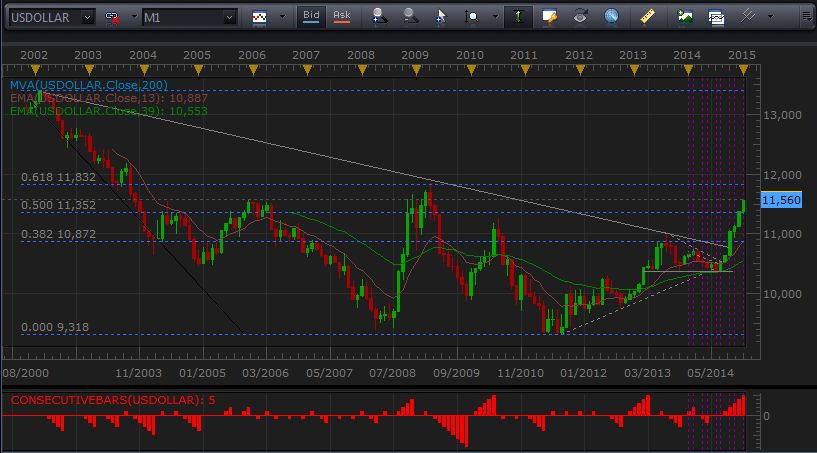