In our contagion article on October 11, 2014, we suggested that “… financial markets are smelling something malignant and they are running scared.” That fear created the flash-crash in Treasuries on Wednesday October 15 and prompted Fed President Bullard’s talk about postponing the final taper on October 16th. Coincidentally or otherwise, the stock market bottomed the same day and proceeded to shoot up in a vertical rally for seven straight weeks.

This Thursday, Scott Minerd of Guggenheim Partners seemed to smell what we did in October:

The close on Friday seemed panicky to us and it came after the worst week of the year. Treasury yields fell below their closing yields on flash-crash Wednesday, October 15. So will the Chair Yellen follow Mr. Bullard’s precedent this coming Wednesday and lessen the rise in rates built into the markets for 2nd half of 2015?

We have maintained since 2013 that tapering is tightening. The clearest evidence is the inexorable flattening of the 30-5 year yield curve in 2014 from 223 bps to 122 bps on Friday – a full percentage point. This is what happens during a sustained tightening by the Fed. This reality has been hidden this year because of the steady rally in the US stock market. But this week’s decline prompted Scott Minerd to consider it as a possibility in his article Oil, Roil and Turmoil:

The objective of a tightening campaign is to kill inflation expectations. The Fed’s taper-based tightening has achieved that: 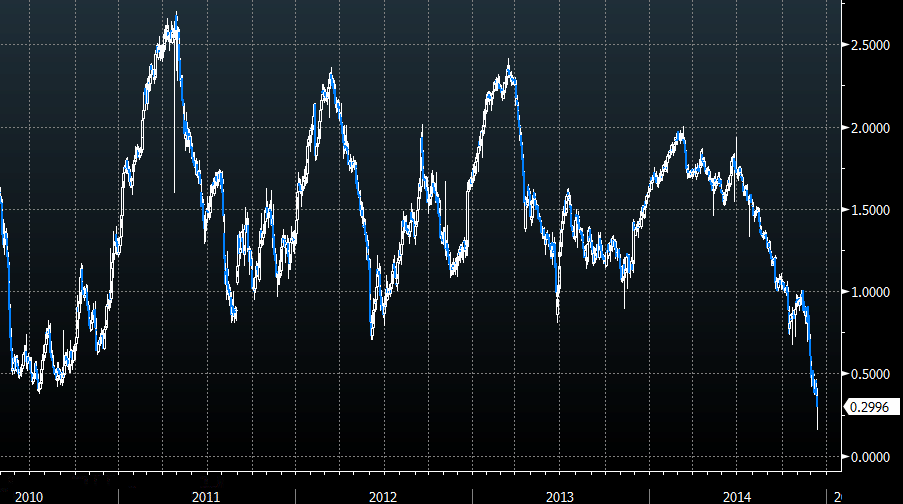 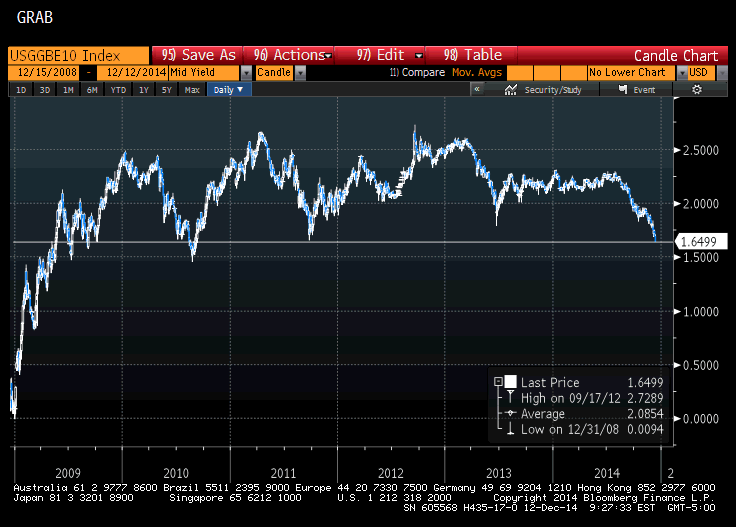 What happens near the end of a sustained tightening campaign? Carnage in some areas of the bond market.

A drop of 50% in the price of the bond. And this is not a unique case: 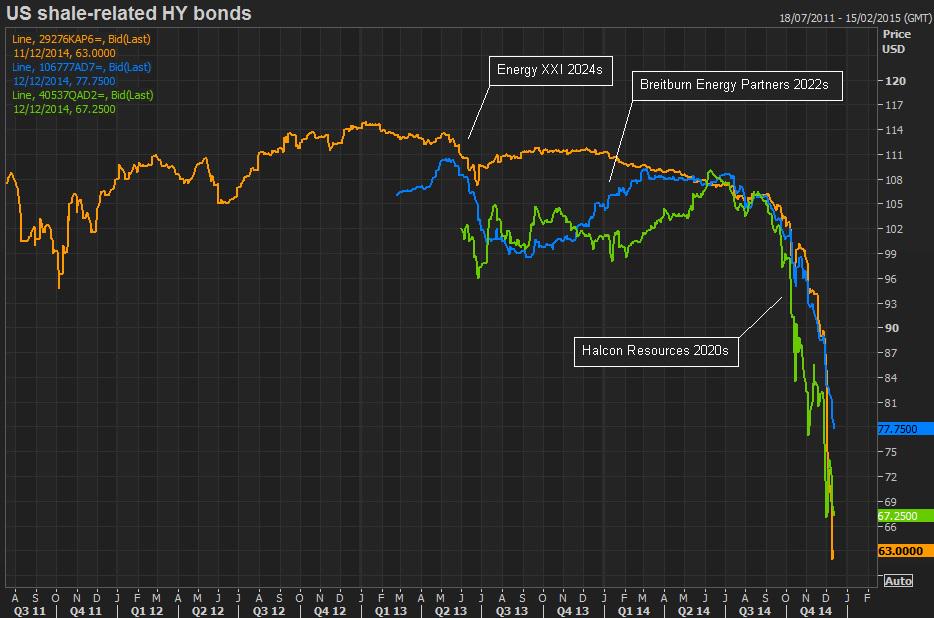 To summarize, the taperized tightening campaign of the Fed has flattened the Treasury yield curve, virtually killed inflation expectations via plummeting breakevens, and created carnage in a highly leveraged area of the corporate bond market – isn’t it time to end the Fed’s tightening campaign?

One guru said yes on Friday.

This stunning prediction came from David Rosenberg of Gluskin Sheff after Friday’s close on CNBC Closing Bell. Stunning because it is, in his own words, a “real fundamental shift in my view“.

Bill Gross didn’t say it so explicitly but he sort of implied it in his comments to BTV’s Tom Keene on Friday: 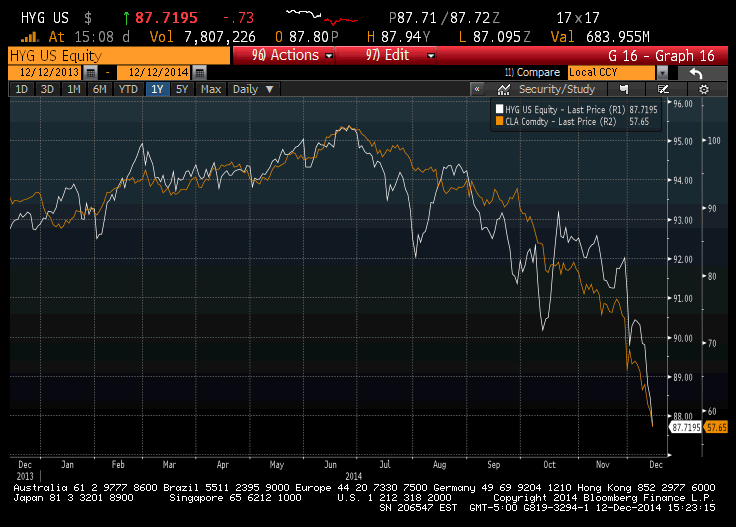 Ok. So when does Oil bottom? We got essentially the same answer from two people. First Rick Santelli used price & time to argue:

Later on Friday on Mad Moner, Jim Cramer conveyed the Hemachandra-Fibonacci numbers based analysis of his fellow technician to argue:

Larry McDonald told CNBC Closing Bell that you can get a 10%-15% bounce even in bear markets and we are getting very close to that point. (In their infinite wisdom, CNBC webmasters deleted this critical point from their clip of the McDonald interview).

Getting back to credit spreads,

So what about the VIX? This move seems different from the previous declines because VIX is leading the S&P. That could be because investors are not selling their positions because of the looming year-end but hedging them via VIX.  At least that seemed to the view of some traders on CNBC Options Action.

The key again, according to Larry McDonald, is:

So what we need is a magic wand that would tighten credit spreads, steepen the yield curve to help financials, lower the Dollar to help oil, reduce the fear embedded in the VIX and get a stock rally going!

That magic wand may be only 3 days away. What if Chair Yellen pulled a “Rosie” & signaled a dovish turn in her statement or presser on Wednesday, December 17? Wouldn’t it achieve all of the above?  The short-end of the curve will plummet in yields thereby steepening the yield curve; credit would rally; Dollar would be sold hard & even Oil may rally. Remember Cramer’s bottoming day for Oil falls between Tuesday & Thursday of next week. And you have:

The markets are convinced that the Fed will tighten in 2015 and the data supports that. David Rosenberg reminded us on Friday that the Greenspan Fed had a tightening bias through out the 1997-1998 Asian contagion with GDP growth at 4% and unemployment at 4%. Then came Long Term Capital & Greenspan stunned the markets with a rate cut. The current GDP is running at 2.5%-3%, unemployment is at 5.8% and wages are stagnant with inflation expectations falling. So why can’t Chair Yellen stun the markets as Chairman Greenspan did in November 1998?

Then you have the signal with a perfect record of forecasting year-end gains: As Dana Lyons writes in his conclusion:

On the other hand, every horrible close on a Friday brings a twinge of fear of a far worse Monday:

Who are we to question a veteran technician like Jeff Cooper? But we do wonder whether his apparition is more relevant for next weekend assuming Yellen remains hawkish. That could be a scenario in which longs liquidate rather than hedge.

As Oil ETFs fell by a horrific 10%, GLD & SLV actually rallied on the week.