This week’s feature story was Brazil. The Brazilian Real suffered a waterfall decline & the U.S. Dollar soared like a rocket against the Real as the chart posted by ‏@DavidSchawel shows.

The damage extended to the entire emerging market universe. 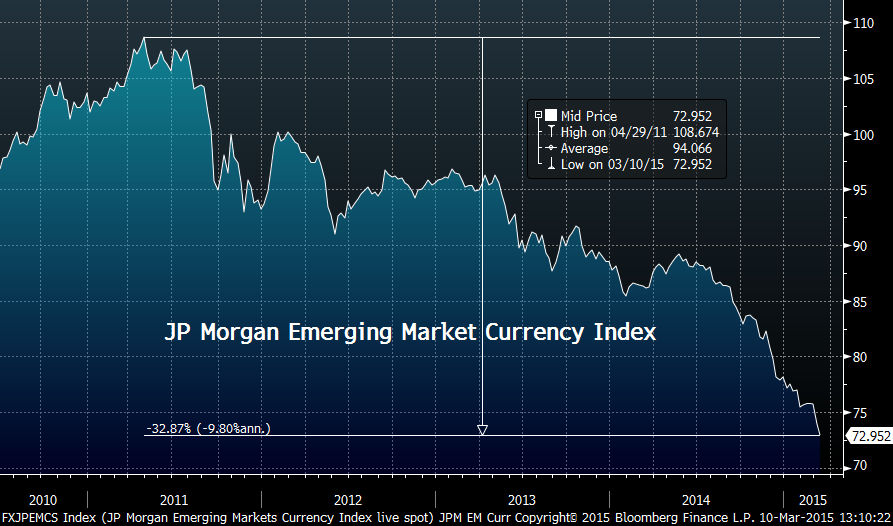 We felt then that the major trends in EM were about to reverse and opined that “fallen angel” India would be the first BRICS country to fly again. One year later, the Indian Rupee crashed to an all-time low of 68.60 against the Dollar and India was again plunged into despair. But that was an opportunity. We saw a decisive pro-India move in US markets on Wednesday, August 28, 2013 and wrote about it then.

2. Party in the Indian Stock Market

That was the beginning of the party. The Indian stock market rose from 17,996 on Wednesday, August 28, 2013 to 29,459 on February 28, 2015, the date of our Party article. If this beautiful 64% rally is not a party, we don’t know what is. This rally reflects both the underlying micro strengths of the Indian economy and confident expectations of the new Modi-Rajan regime.

But if you look at it closely, you will see an anomaly. Yes, the Indian Stock Market is up to new highs, but the Indian Rupee is still languishing. It remains well below the 56-58 $-Rs band that prevailed before the August 2013 currency crisis. All the confidence in Modi-Rajan and all the euphoria about India’s rise has not been able to take the Rupee above the pre-crisis band. Frankly, this is good because this keeps India cheap and that may be required in this period of global currency wars. But it is also a negative technical judgement about India’s frailty, a concern that the Party may be more about hope than reality, and a deep seated worry that the Indian story could easily be at risk again.

Credit is the foundation of every economy. Debt markets fly when credit becomes abundant and fall when credit or monetary liquidity contracts.

The peak was May 2013 as you can see in the chart above. Then came the taper warning from Fed Chairman Bernanke and you see the result. 2014 was a respite but the decline resumed ferociously in 2015 as markets began worrying about tightening by the Yellen Fed.
The reality is that Emerging market countries & companies have gorged themselves on global low interest rates and borrowed in cheap U.S. Dollars. 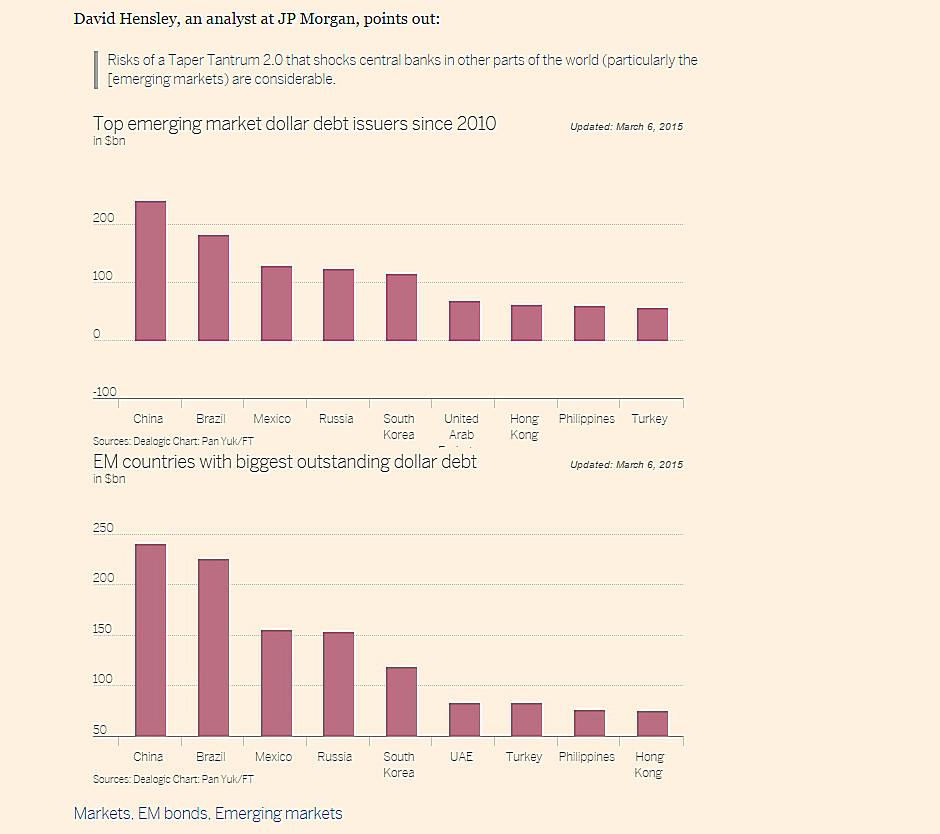 India is not among these countries. So why should we worry?

4. Why worry about India?

India looks shiny and great now. The steep fall in commodity prices has been a boon for India. The Reserve Bank of India has begun cutting interest rates. And the world is getting even more optimistic about India. This week, the IMF raised its projections of India’s growth rate to 7.2%. What country would not kill for such a growth rate?

But “jo diktha hai wo nohi hai aur jo nahi diktha hai wo hai” was a refrain of the veteran Bollywood actor Kader Khan – what you don’t see is and what you see isn’t. In that spirit, you need to probe underneath India’s shiny economic exterior to find the reality, reality of decay in the infrastructure.

That decay is a steep massive rise of corporate debt. This was discussed in an article in the Hindu BusinessLine on March 2.

Where does this reside and who takes the fall if India’s corporations can’t generate cash flow to repay the debt?

That is the crux of the problem. India’s public sector banks may not have the financial size to absorb this level of restructuring and, frankly, India’s Government may not have the financial capability to put in enough capital to both protect the banks and to provide necessary spending to achieve its growth targets. This reality could prove a problem for the Indian Rupee if the markets begin to focus on it.

Both Arun Jaitley, the Finance Minister, and Raghuram Rajan, the Reserve Bank Governor, know this and they have told the banks to not expect bailout type monies from the Government. The message has been received loud and clear as this week’s story about the State Bank of India shows:

This auction will take place this weekend. What if the auction proves unsuccessful? In any case, the auction is to get $200 million, merely 2% of State Bank’s $10 billion of bad debt. And the problem is across India’s banking sector:

The scale of the problem is being realized but it is still deemed manageable. That is why the Rupee is still more or less stable.
5. Secular Infrastructure Issue – Neglected by Governor Rajan?
Our greater concern is about the secular problem of India’s financial infrastructure than today’s cyclical problem.
Indian Corporations and India’s large public sector banks have a crony relationship that has been fostered by Indian political establishment. Indian politicians come to power by campaigning in elections. Indian elections are expensive and are getting more so with each election. So Indian politicians demand massive campaign contributions from the Indian corporate sector. In return, Indian corporations get access to loans from Indian public sector banks whose CEOs & Board Members are appointed by the Indian Government.
The majority of India’s corporate sector is family owned and the actual ownership of the family is usually quite small. This is why India’s corporate sector is loath to raise capital via equity issuance that  lowers the ownership of the family. The largest shareholders of Indian corporations are India’s public sector financial institutions who help corporations access funding. And they tend to support the family control of the corporations.
What a perfect system to generate mountains of bad loans that can be supported with deposits from India’s long suffering people? A system created for the express benefit of a crony clique of family owners, senior officials of public sector financial institutions and of course of the ruling politicians. True this comes at a massive cost to the Indian people but no one cares about the people anyway at least not until the next election.
And India doesn’t have a bankruptcy law that makes equity ownership worthless. This allows family owners to default without losing any share of their ownership or their management powers. Contrast this to U.S. bankruptcies where employees keep jobs, businesses keeps running but equity owners get wiped out.
This crony system is the secular problem of India’s financial infrastructure. Until that changes, improvements will only prove cyclical. The solution isn’t finding short term solutions to today’s problems or installing good financial governance. Because those can vanish with when this government is replaced by another.
The real solution is to build corporate bond markets that function in the open with a sensible bankruptcy law – both investment grade and high yield bond markets that can fund companies in a transparent manner. These will not replace big Indian banks but provide an alternate access to funding. This will also provide Indian people and foreign investors another way to invest in India’s corporate sector.
Very few economists and finance managers in India understand this because they have never ever experienced or participated in open bond markets. But Raghuram Rajan has and he has the experience, knowledge & authority to begin this process. Unfortunately, Governor Rajan has shown no drive to build bond markets in India. He seems content to address cyclical problems rather than build a secular, structurally strong, market-driven financial infrastructure that will live on long after he leaves.
That is a tragedy for India and will be regarded as his biggest failure.
Send your feedback to editor@macroviewpoints.com Or @MacroViewpoints on Twitter