The way we see it, the rally in stocks is a confidence game at this stage. Meaning the sustainability is dependent on the confidence in President Trump delivering regulation relief & tax reform. And of course on the Fed maintaining its supporting posture.

Just look at this week. When the mess over immigration order was clouding the picture, stocks meandered & went down some. Chair Yellen delivered an unexpectedly dovish statement on Wednesday, Speaker Ryan said in Thursday that tax reform would be this spring’s business. Then on Friday President Trump met with executives from major financial firms, decided on easing regulations & spoke about easing the Dodd-Frank burden. And the Dow had the best day of 2017 (thanks mainly to GS rallying 4+%).

But whose confidence game is it? 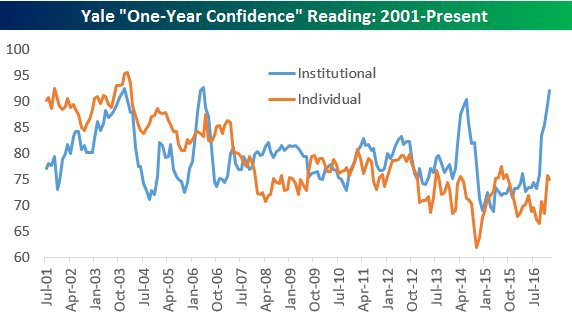 We think it might be that simple.So what’s next for the confidence in President Trump? The tweet response to the tweet below could be a positive signal.

Any statistical help for the stock rally if Mr. Atwater proves correct?

Once again, Chair Yellen went dovish in the FOMC statement when the markets were ready for a hawkish one. Rick Santelli said the Fed had “raised cautiousness to the world series magnitude“. Chair Yellen had nothing to lose by writing hawkishly about potential rate hikes. The data was strong and the markets were ready. And the March meeting was weeks away and she could easily backtrack at that time.

But she simply doesn’t have the courage to signal hawkish intentions unless she sees clearly ahead. And therefore she ends up doing so just at the wrong time.What she did accomplish is a slight steepening of the curve with the 30-year yield up 3 bps on the week while the yields along 10-2 year curve closed lower with the 5-year yield closing down 3 bps. Look at this week’s progression of the 5-year yield – 1.964% pre-FOMC to 1.938% pre-NFP to 1.92% close on Friday.

Is that what Chair Yellen wanted?

Treasury rates have been somewhat volatile but credit has been steady. Emerging Market Debt has been the best performer & High Yield bonds have also done well. In fact, Michael Contopoulos of BAML said High Yield might well prove to be safe haven even if stocks decline. There is another sector that has been steadily rising – Closed End Municipal Bond Funds. Look at the ytd chart of PNF, the Pimco NY Muni fund.

This is clearly saying that, at this stage, the Fed has very little chance of raising rates substantially. But what about a rally in Long Duration Treasury prices? The short position is still high: 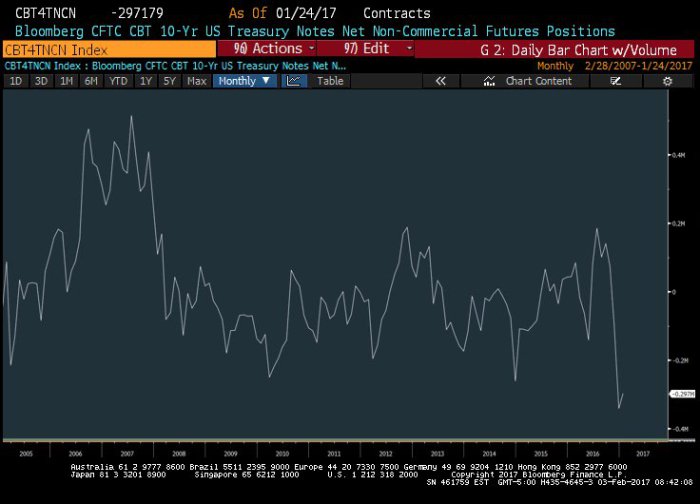 So the short position represents fodder for a rally, the Fed is out of the way for weeks & the payroll report was weak in wage growth. So will any Guru step up & say buy long duration Treasuries? One did on Friday late afternoon.

We include the above clip as the best way to present the charts of Carter Worth, resident technician of CNBC Options Action. His target for the 10-year yield is 2.15% about 32 bps below Friday’s close. This is consistent with Gundlach’s call for the 10-year yield to break 2.25% but not 2%.

Like EM Debt, EM stocks have blown away the S&P 500 this year. We wrote about the Indian stock market in our banner article last week – India – Best Structural Story in Asia. This week, investors reacted with glee to the annual budget presented by India’s Finance Minister & the Indian indices rallied by 2.8% on the week. 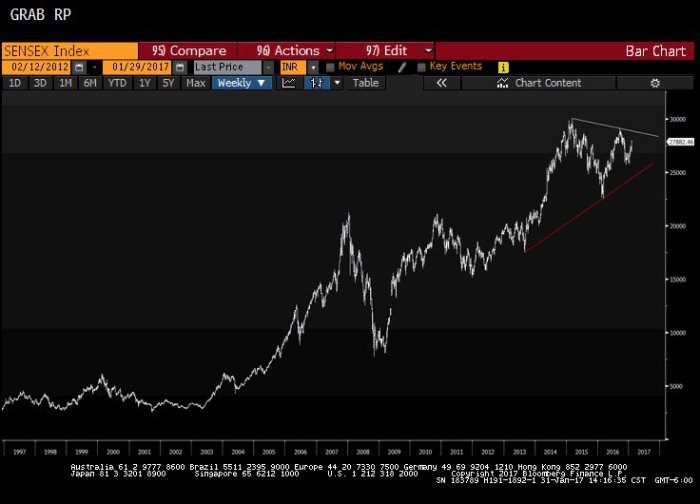 Back in November 2016, when the Indian stock market was going thru a swoon because of fears about the demonetization initiative, a smart trade stepped up and tweeted:

If EM is doing well, then how should basic materials act? 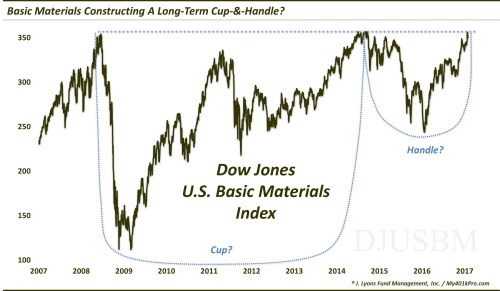 The Dow Jones closed above 20,000 once again after a correction of 250 odd points from the last breach of 20,000. What’s different this time? CNBC didn’t even say a word about Dow closing above 20,000 this Friday in stark contrast to the heady cheers in their special earlier. Does that mean, the Dow has a better chance of keeping going?

Lawrence McMillan of Option Strategist remains bullish – “For now, the intermediate-term outlook remains bullish because $SPX is above support and $VIX is below resistance.”

But more & more gurus seem to warn of a near term correction. Louise Yamada spoke this week of “an upward flag consolidation” that could lead to a 5-6% correction which should be bought.

And then you have the other Dow Theory signal: 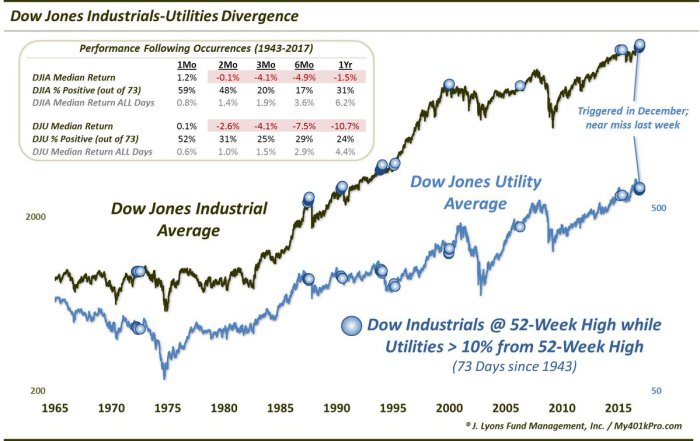 But what if Carter Worth proves correct & TLT rallies? Wouldn’t Utilities rally too? Then will the above red flag turn green?

Gold & Silver had a good week & the miners had a great week. How does a smart technician look at them now? 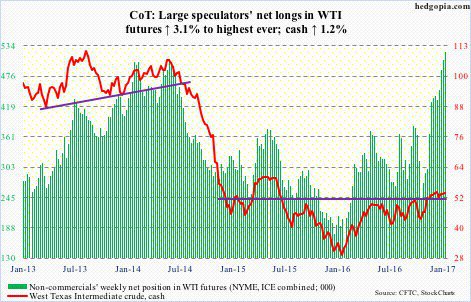 We are simple. Bill Belichick was a NY Giant & will always be a NY Giant for us and Tom Brady is Michigan, pure & simple. So when the real NY Giants are out, the Brady-Belichick Patriots are our pick regardless of the consequences. 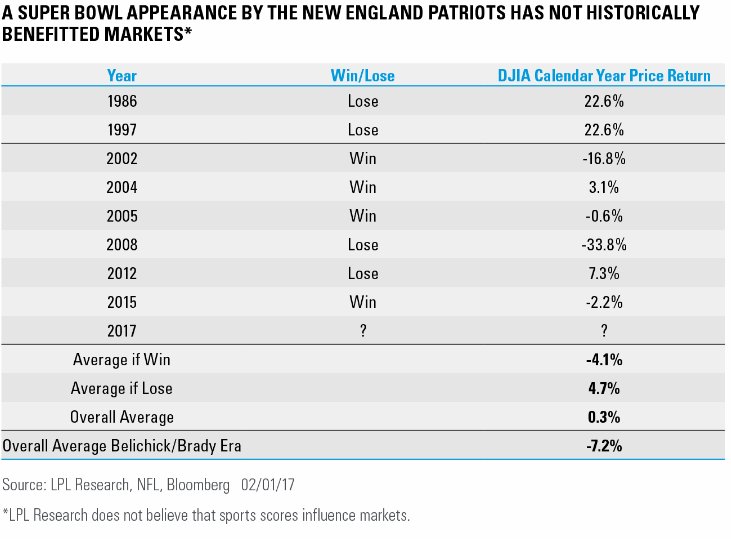