Economic panic had gripped India a mere 3-4 weeks ago. Gone was the arrogant euphoria of being the fastest growing economy in the world. Consumer demand had fallen hard and small sector companies (where 90% of India’s workers work) were retrenching & laying off workers. Gloom was not just in the air but in hearts & minds of Indians. The Indian Stock market had fallen hard in contrast to the rallies in other world markets.

That was the case a mere 3 weeks ago when we wrote our article Economic Panic in India; Is That An Opportunity Again? The answer turned out to be a resounding yes. The stock market has rebounded fast & furious. The Sensex and the Nifty 50 indices rallied to new all-time highs this week. More importantly, the small scale sector of the Indian stock market rallied harder, a sign that employment & demand issues are already improving and will improve more next year.

The first signs of recovery showed up just 10 days after our article. A preliminary September reading of India Current Activity Indicator of Goldman Sachs (calculated on 3m/3m annualized basis)  suggested that growth increased to 7.7% from 4.9% in August, suggesting a potential recovery in activity.

Was Prime Minister Modi content with this quick but small recovery? We didn’t think so. Remember what we had written on October 7, 2017?

PM Modi is not the sort of a man to take small steps. He is, in our opinion, a man who takes advantage of a downturn to launch big programs, programs that have the potential to catapult today’s India into tomorrow’s more vibrant India. So we were not surprised when he went big a few days ago.

How big? He raised the minimum support price (MSP) for wheat by 6.8%, the biggest increase in six years and he announced the largest investment ever proposed to connect India through roads.This should prove to be a big boost for the Indian economy, especially the rural & semi-urban economy. But these are traditional measures. What about a major innovative step, you ask?

PM Modi announced a bank recapitalization of US $32 billion for Public Sector Banks this week. And he did it in a smart & innovative way thereby minimizing the budgetary impact to $ 11 billion over the next two years. Such a recap has been deemed necessary since he took power in 2014 given the size of non-performing loans (bad debts) piled up during the previous Congress party rule. But it was not an easy step to take given India’s fractious political environment.

Most leaders would have preferred to retrench and wait for better conditions. That’s not Narendra Modi. His characteristics are audacity & brilliance. So he used the opportunity presented by the recent economic panic to launch this bank recap.

How important is this recap? Merrill Lynch described this recap as “a really big step for recovery“. And the sagacious Raoul Pal called it the “catalyst for the next higher phase for the Sensex“: 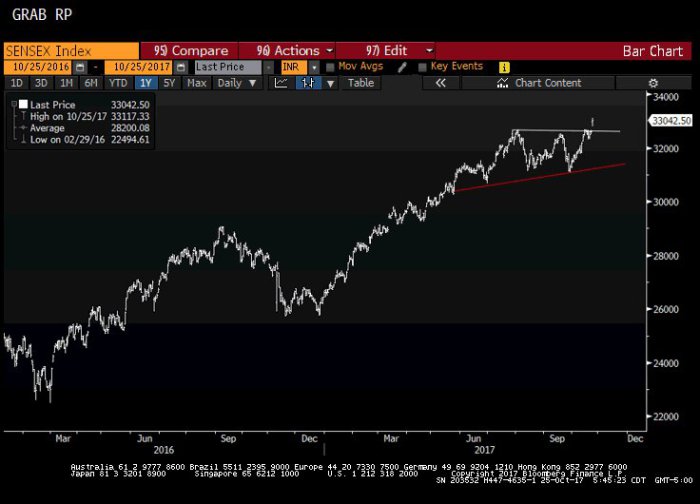 What about Peter Brandt, the smart veteran trader whose chart (& target of 11250 for Nifty index) we featured in our October 7 article? In an interview with the Economic Times of India, Peter said:

What is special about the third quarter of 2018, you ask? Only the launch of the campaign for the national election in 2019. Modi’s friend & partner PM Abe recently swept the election in Japan. So PM Modi has to do at least as well as Abe. Therefore we expect more programs to be announced in 2018 for the little Indian, the MIP (Most Important Player) of India’s Electocracy; programs that will boost the incomes of India’s poor & middle class.

So yes, once again panic in India proved to be an opportunity. However, as the Indian stock market has reached new all-time highs and smart traders like Peter Brandt have targets that are about 9% above here, it is important to remember that markets don’t necessarily go up in a straight line and that informed opinions of smart traders are only opinions.

And as the Bhagvat-Geeta (II.69) has taught the world for over the past 4,000 years, when the majority of people are in the sleep of complacency, the Saimyami or the balanced one remains awake.