The IMAG earnings were absolutely wonderful and even more wonderful was the performance of the 4 stocks on Friday morning. That’s just our limited imagination speaking. Some others were wonderfully eloquent, one of them being:

Mr. Wonderful, or Kevin O’Leary as he is sometimes called on CNBC FM, did not extend his descriptive term to discuss what science calls a refractory period, which in this case would mean an opportunity to scalp a short trade. While the naked eye reveling in the upside gushers might have missed the difference between these four, charts don’t miss much. Look at the difference between AMZN & GOOGL on Friday:

GOOGL peaked around 10:15 am & faded while AMZN kept up rising until 10-15 minutes prior to the close. Note also the heavier volume during the last 15 minutes of selling in GOOGL vs AMZN.

Notice the red candle at the end of the day for MSFT. Also MSFT showed the most volume in the sell off into the close, followed by GOOGL, then INTC and then the best of them all AMZN.

Does any of this mean anything? Will the short scalps presented on Friday morning, deliver more on Monday or will these stocks rally hard on Monday? We got to wait and see but some did notice a sort of Demarkian upside exhaustion potential for next week. Hedge Fund Telemetry saw it in INTC on Friday. 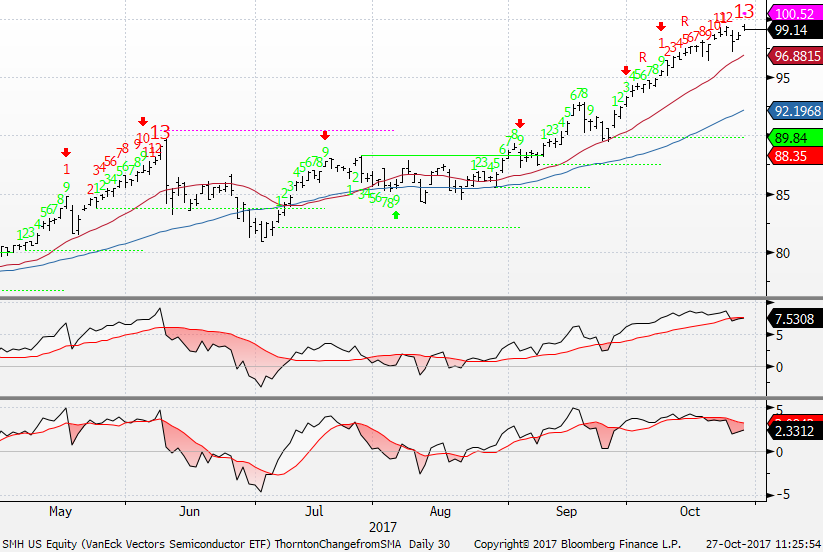 Bespoke discovered another measure in semiconductors earlier in the week: 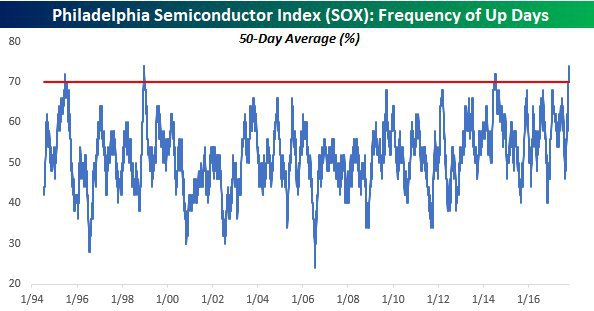 Another condition was noticed on Tuesday: 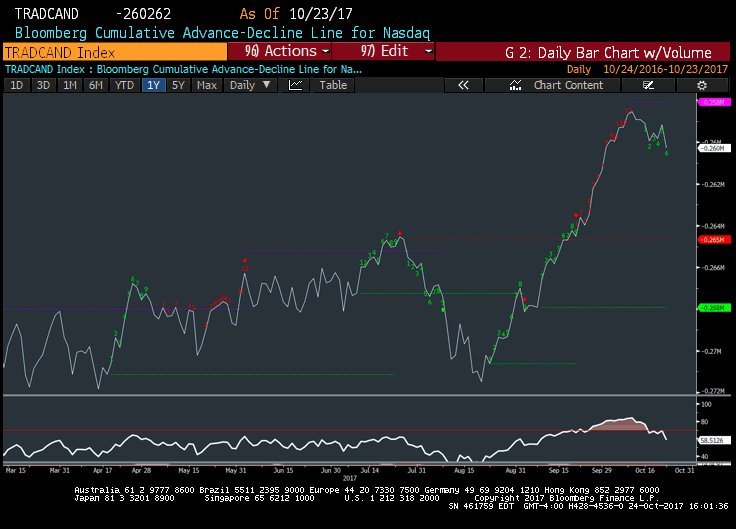 Shouldn’t the weakening of A/D lines get reflected in markets?

But Andrew Thrasher himself pointed out that these divergences have not mattered so far in 2017. That is why the smart posture has been to wait for something to change.

Mario Draghi made his move on Thursday by announcing a taper in his QE from 60 Billion a month to 30 Billion a month from January 2018. Euro fell hard against the US Dollar. Now Yellen is on deck for Wednesday. Will she confirm the start of QT? Will she do so hawkishly or dovishly like Draghi? On that might depend the performance of EUR/USD. 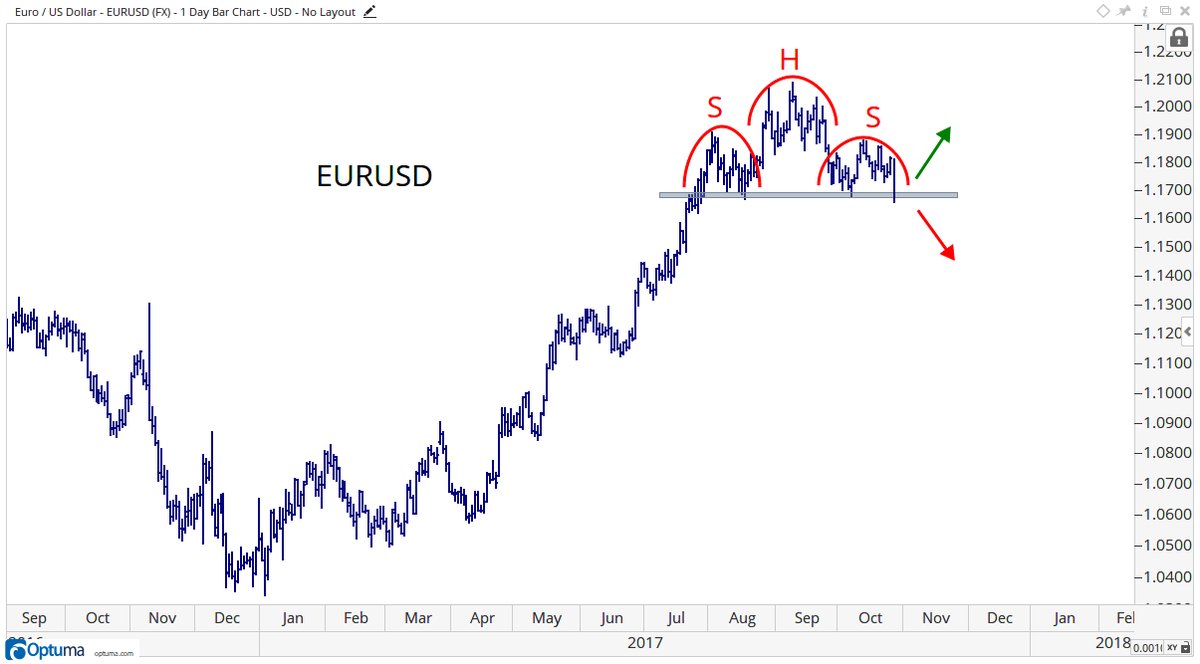 Given the formation above, whatever happens could prove big. Of course, some are clear about what is going to happen: 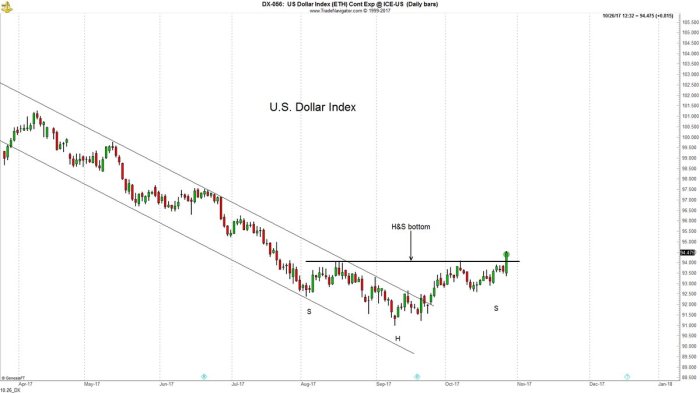 The Dollar was up 1.6% this week. So far a strong Dollar has meant higher interest rates. That has also been the case since Irma. Will that change given Draghi & Yellen?

What did Gundlach tweet on Tuesday & on pre-Draghi Wednesday, October 25?

Perhaps the fall in yields on Friday was due to guidance from those who know to expect Powell to be chosen as Fed Chair post-Yellen. Perhaps it was driven both by the fall in Bund yields and the extreme short positions in 2-year & 5-year Treasuries. 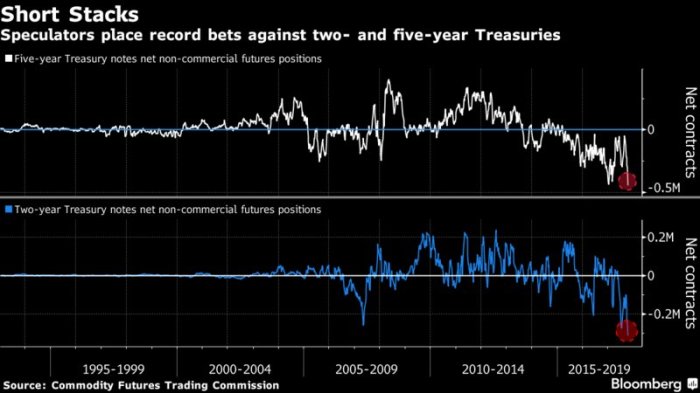 What about the 10-year? Brotherly Najarian love came to the fore on pre-Draghi Wednesday. Jon Najarian spoke during CNBC FM 1/2 and Pete Najarian tweeted: 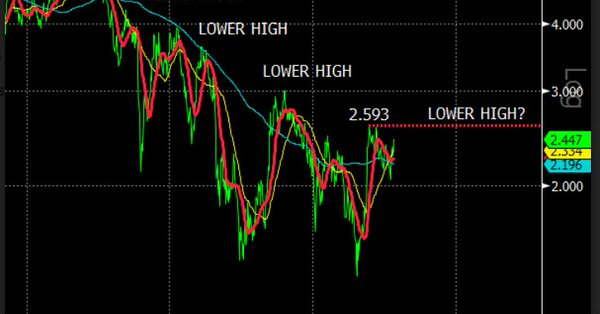 So many smart guys have said so many smart things about stock oscillators. But we had never heard any one speak or write about a Bond Oscillator until Friday. In his article Bond McClellan Oscillator Almost Oversold, Tom McClellan wrote on Friday:

So what do we need? A fast steep sell off post Yellen statement on Wednesday?

Has there been a more pathetic asset class than Gold & Gold miners for the past few weeks? But is there light at the end of the tunnel despite the up move in Gold? Hedge Fund Telemetry thinks so: 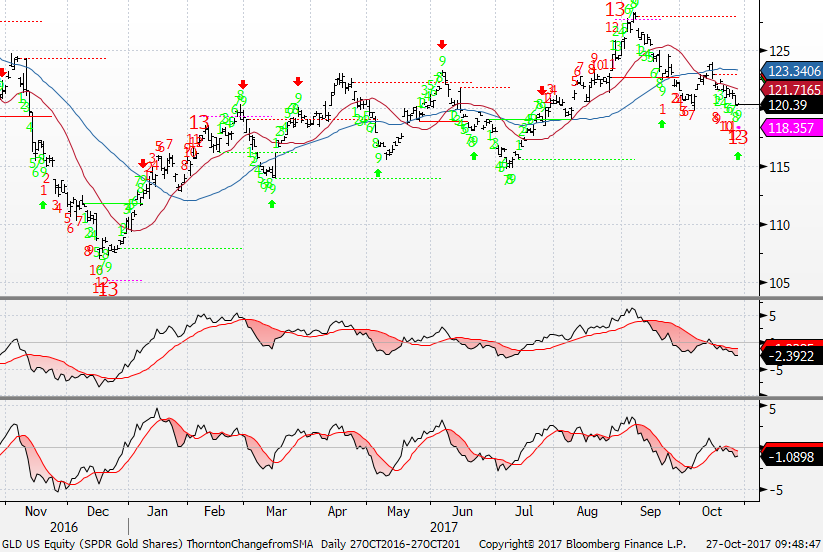 They do warn that Gold Futures have not achieved the same exhaustion yet.

The Indian indices went to all-time highs this week. The Indian ETFs were up 2-3% on the week. A better performer was INXX, an infrastructure ETF. That makes sense because the Indian Government announced the largest road-building program ever in addition to the recapitalization of the Public Sector Banks. For a more detailed discussion, please see our adjacent article – WOW! From Panic to Glee in 3 Short Weeks in India.

6. Why our change towards Demarkian upside exhaustion signals?

So why are we now looking at those signals? The answer is clear – Draghi & Yellen; more specifically their actions in replacing E by T.

The days of unlimited forever liquidity are over. Draghi announced a 50% cut in his QE from January 2018. Yellen has announced her own QT as well. If she begins this QT on next Wednesday, then she will have tied the hands of the next Fed chair at least through the the first half or quarter of 2018.

This will prove to be a major change for global markets next year. As liquidity starts getting reduced, the probability of upside exhaustion signals proving correct will rise. At least, that is our view.