1.A Bullish Turn in Risk?

The first three days of this past week were clearly bullish. It was almost as if a turn had taken place over the G20 weekend. Jim Cramer wondered whether US & China had come to an agreement and Paul Richards of Medley Global converted that belief into a call on Wednesday morning on BTV.

He then alluded to the big announcement of Tuesday – the nomination of Christine Lagarde as ECB Chair, a far more impactful position than the IMF Director position she has now. Everyone knows that the real problem at the ECB has been political, a problem of persuading the leaders to loosen the fiscal strings to complement the monetary easing of Draghi. And Christine Lagarde is first & foremost an astute politician. 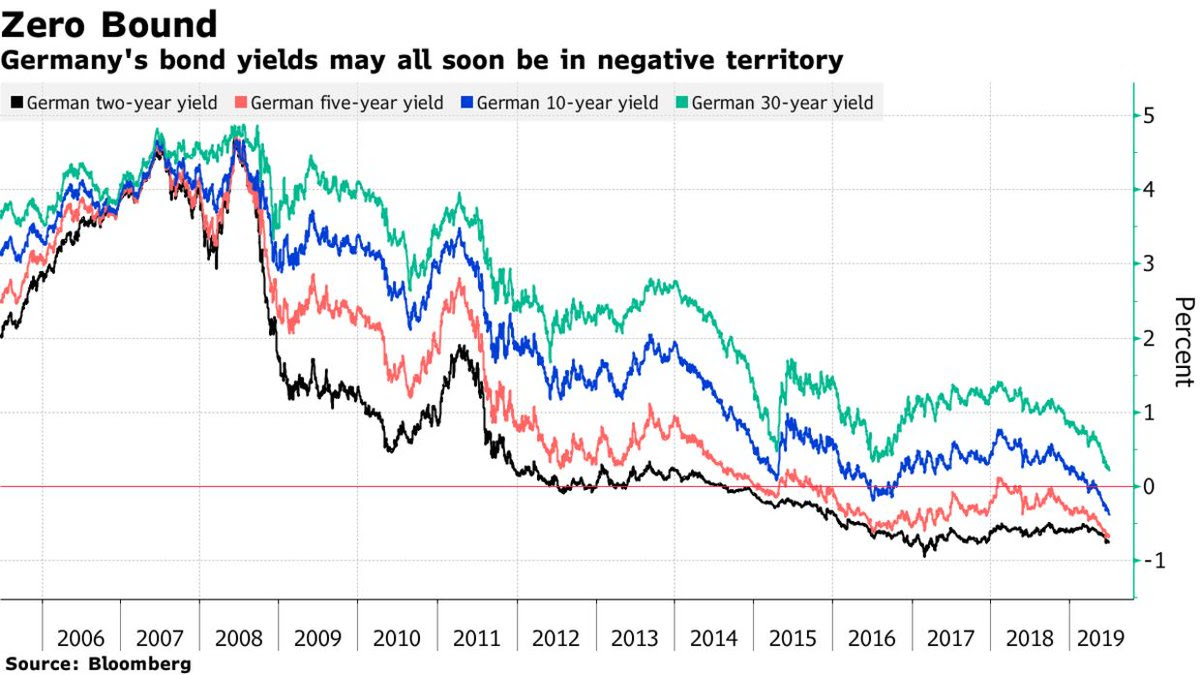 Coincidentally or otherwise, a DeMarkian asked whether the German 10-yr bund yield is actually about to go up. 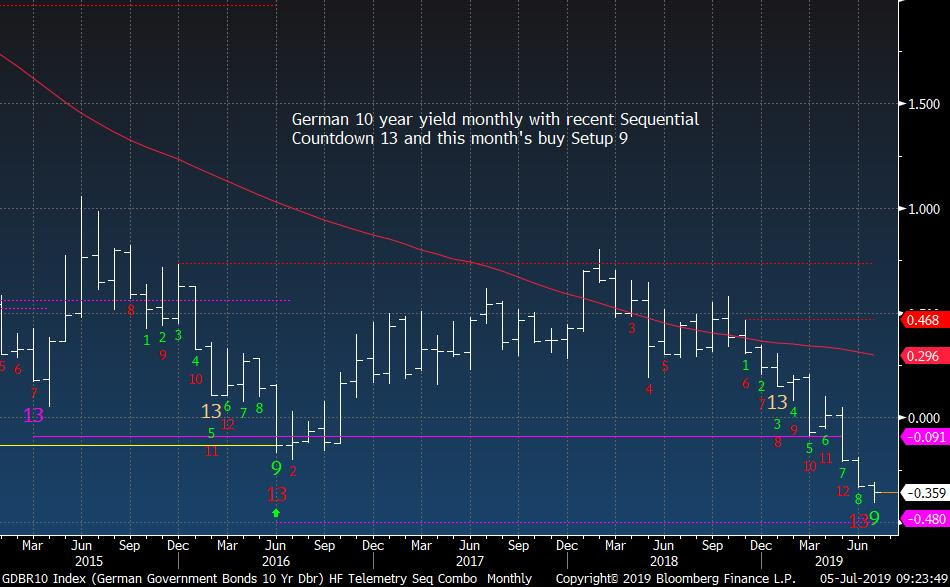 That could well be the markets reacting to Ms. Lagarde’s appointment with hope for a fiscal stimulus from Germany. Nothing would move US Treasury yields higher & faster than a rise in German Bund rates.

The S&P actually closed on Wednesday within a hair breadth of the 3,000 mark. And rates kept falling until Friday morning. Into these overbought markets came the 224,000 jobs added NFP report on Friday morning, much stronger than feared.

The Dow dropped 230 points in the morning but then began a steady recovery. The big indices only closed down about 20 bps or less, something that the bulls can regard as a victory. And this recovery came with a steady but smaller recovery in Treasury prices. The 10-year yield that had fallen almost 11 bps closed down 8 bps. But the short end rose higher in yield & the July rate cuts priced by the bond market lost much of their conviction. That stocks recovered as rate cut probability got reduced has to be taken as a positive.

Lawrence McMillan of Option Strategist wrote in his Friday’s summary:

So where could the S&P go? To 3015 & eventually into 3300s or so according to Carolyn Boroden, a colleague of Jim Cramer. Watch Cramer explain her methodology in the clip below.

With all the above, someone has to see the other side, right? 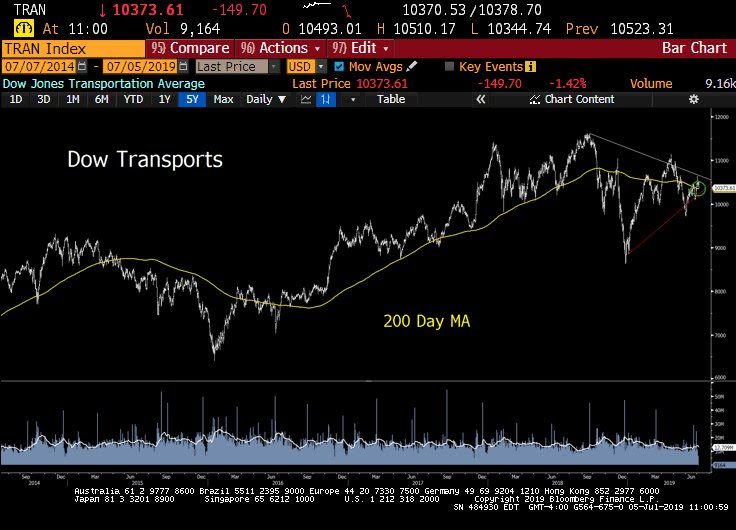 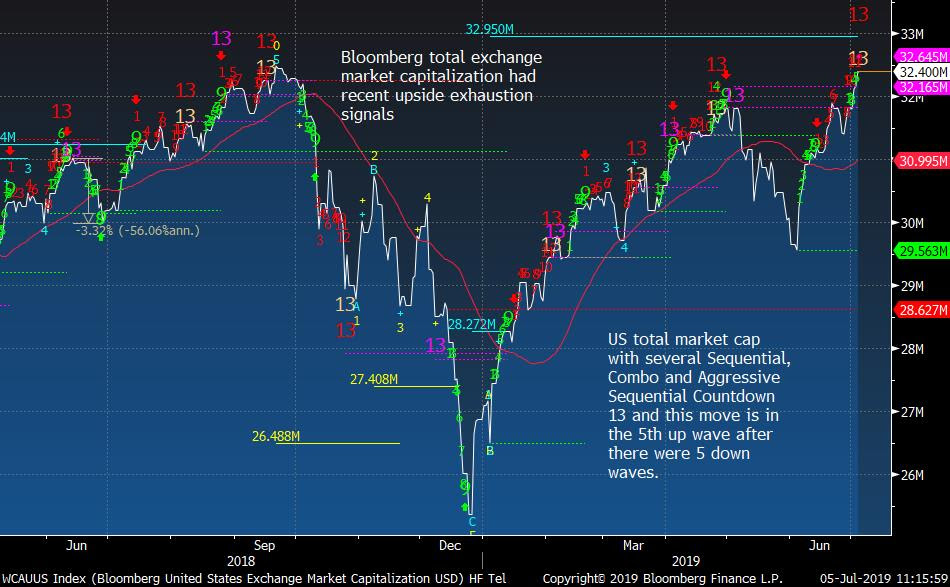 Was the explosion in interest rates as much a factor of positioning as anything else? 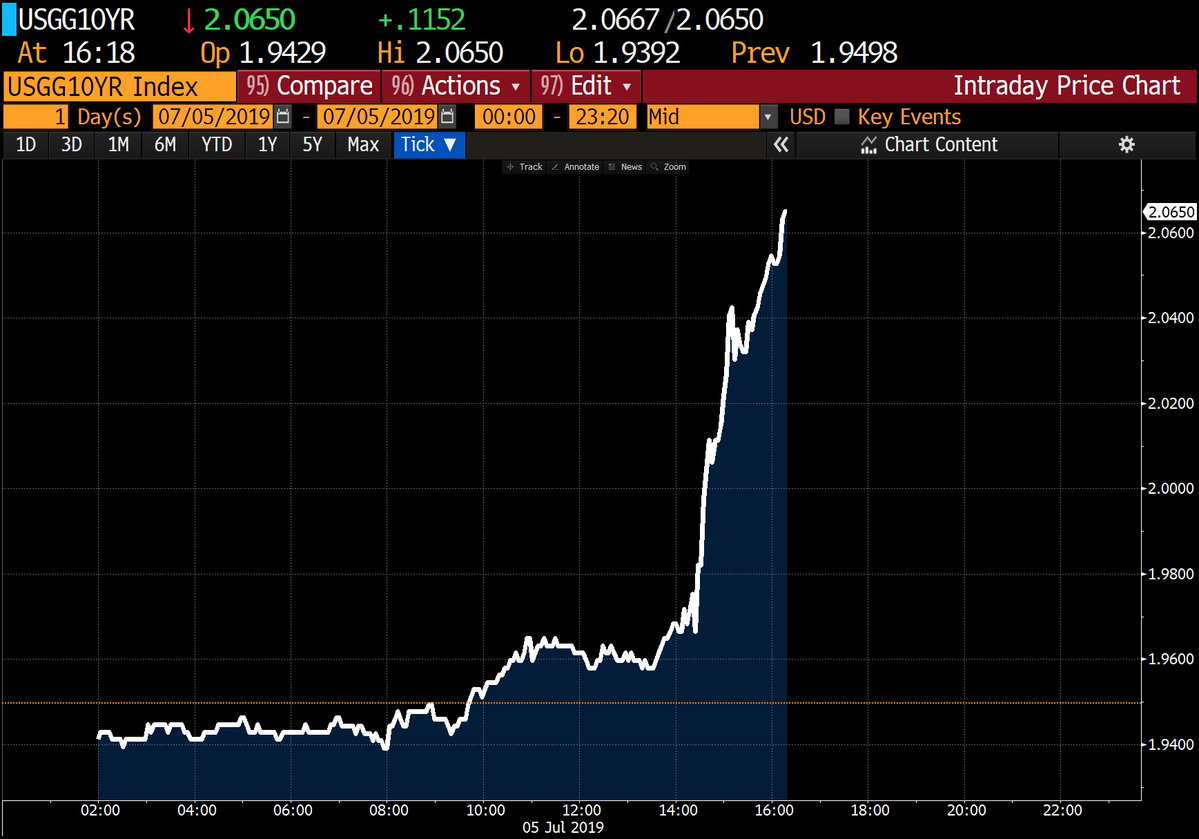 Then why did the 10-year yield closer lower by 4 bps than this morning’s level, especially when stocks were  steadily rallying? Was there a “fake” involved?

There are many who think the recent collapse in bond yields will reverse hard just as in 2016. Rosenberg dismissed that two days before the NFP:

ECRI didn’t use the “fake” adjective. Instead they were content to say “mislead”. 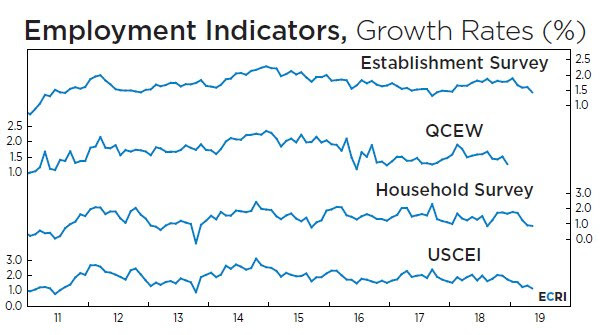 We urge all to read the article linked in the above tweet. Below we include just a few excerpts:

After all the above, is there a simple fact that simple minds can grasp?

The message from the recent ISMs was not positive. 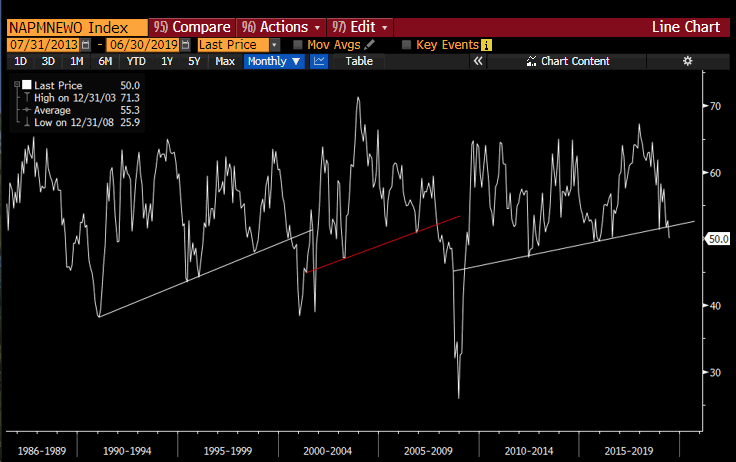 USA is an island, of course. But just for the heck of it, how is world trade looking? 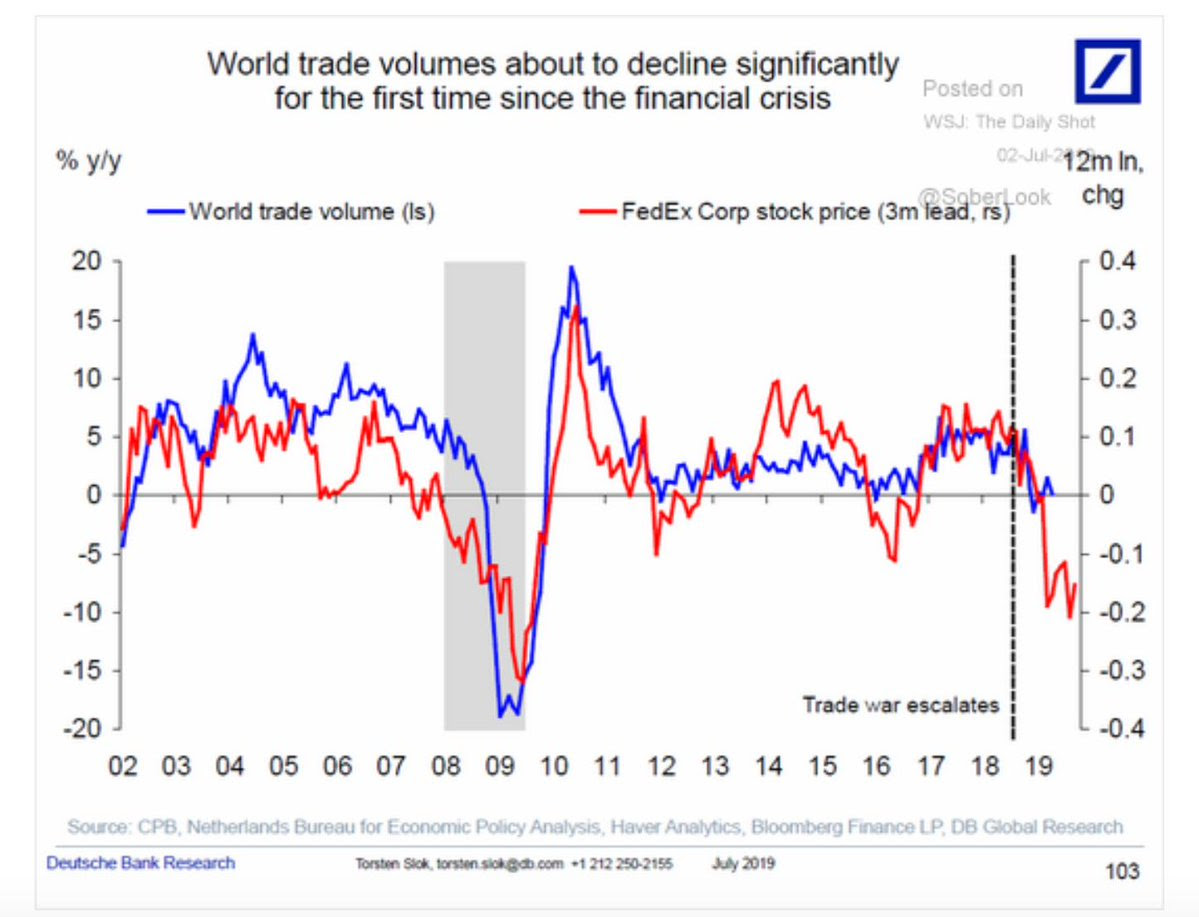 Is there a way of summarizing much of the above? 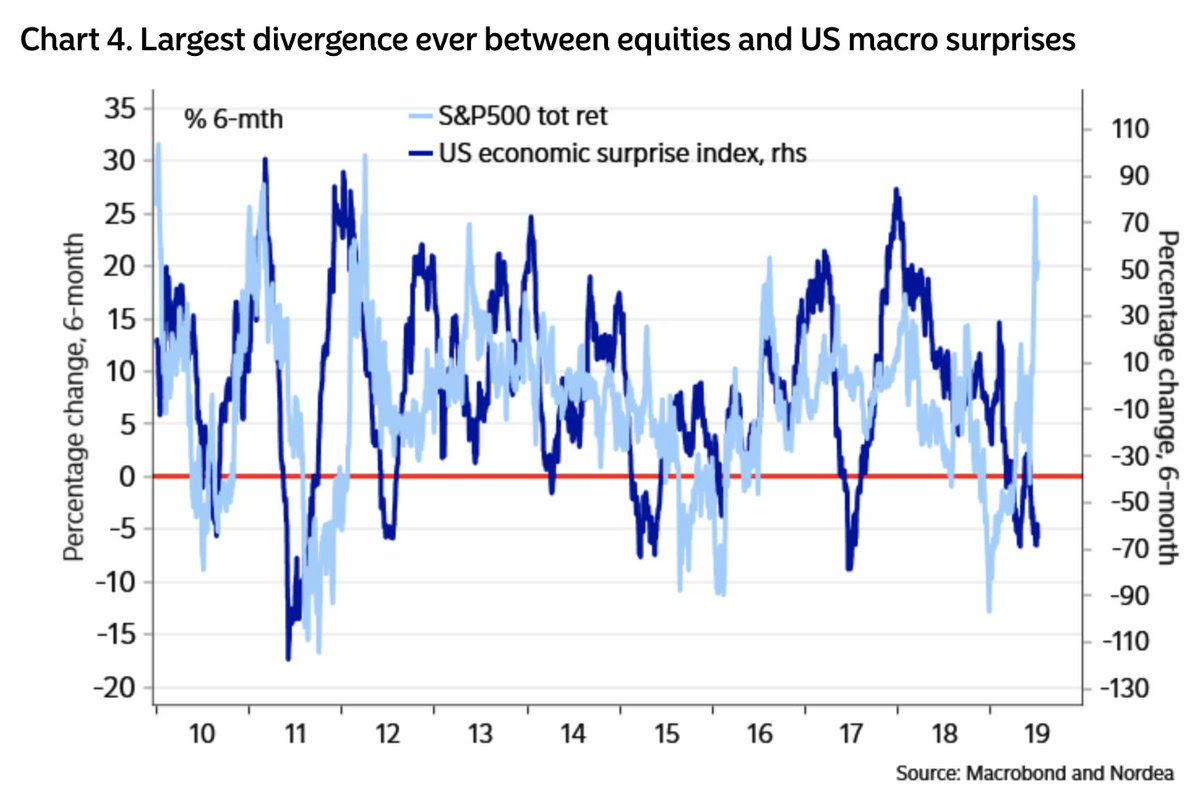 This is why we have been arguing that a back up in Treasury rates to 2.25% – 2.5% could prove to be a terrific opportunity to buy Treasury bonds.

Our worst fear for 2019 is getting closer to being realized, fear that the Fed will be too late to the easing the US economy needs to stem the deflationary slowdown spreading through its body. The Bernanke Fed was too late to recognize it and by the time he saw it, it was too late. We think the Powell Fed is following that path.

Good luck to us all. We may need it big time by the fall.

Gold may have been the one asset that was even more overbought then Treasury bonds. No wonder, Gold got shot after the NFP number on Friday morning. This was the second whacking of Gold this past week.

But Carter Worth of CNBC Options Action said “keep buying Gold” on Friday evening. He said “all the elements of a major rounding bottom” are in place. And amazingly, CNBC.com doesn’t list this video. It has been relegated to msn.com. Watch it here .