During a WhatsApp conversation about the lockdown in New York & Mumbai, we heard an opinion that post-CoronaVirus China would be a leading power while America would decline relatively. We were momentarily stunned because we just couldn’t understand how any one could think so.

On second thought, we remembered that many we know in Mumbai are BrIndians, meaning totally Brit-influenced Indians. They have little understanding of America & far little respect. It is weird that Brits have long accepted the primacy of America but their loyal & loyalty-trained BrIndians still have not. Actually BrIndians still feel angry that their master Britain has been replaced as the world leader by an America that they regard as “clearly unworthy of leadership“. They remember the clipped Oxford English of their Brit masters & think of America as “uncouth” besides being brash.

We also remembered what Jeff Smith, a sensible & balanced research fellow at the Heritage Foundation, had tweeted a few months ago. He was getting similar feedback from many countries in Asia. They all were telling him that China was a rising power destined to dominate while America was declining. It sounded just nuts to him and he wrote an article disputing that widespread notion.

Finally we were astounded to read this week what Dr. George Friedman, founder of Geopolitical Futures, wrote this week:

He described this as a “a baffling question from my standpoint” in his article Power and Rise and Fall of Nations.

2.Deja Vu all over again

Remember what happened a dozen years ago. The US financial crisis was just exploding. It led to the Lehman bankruptcy that fall and plunged America into the “Great Recession”. Virtually every major bank in America was near insolvency & Housing, the bedrock of American Family networth, was crashing in value.

Everybody in our BrIndian network began sounding the America is finished siren. China began proclaiming that their system was so superior to America’s. That message seemed reasonable to just about the entire World, including Switzerland & Europe. After all, the 5-6 years before the 2008 financial crisis was the era of limitless growth in China & China-led Emerging Markets.

Well, how does it look in retrospect? Look at the 10-year charts below. First America’s stock index vs. the entire world ex-America over the past 10 years.

Now let us focus on US vs. Emerging Market Index EEM (dominated by China) and US vs. Europe (EFA):

Instead of declining after the 2008 financial crisis, America simply blew past the entire world, leaving far behind China, Europe & Emerging Markets. What about America’s Banks who “created” that financial crisis? Today, America’s banks are the strongest they have ever been with fortress like balance sheets. In stark contrast, European Banks remain deeply mired in a slump; Chinese Banks are nearly insolvent & laden with bad debts & so are most Indian banks.

3. China vs. America today – the facts

China is perceived as a dominant military powerful soon to rise to a mega-superpower. But what is the reality? As Geopolitical Futures explains,

Leave aside America. The Japanese Navy itself would be able to hold its own against the Chinese Navy. And Japan is launching its development of hypersonic missiles and Japan is all set to go nuclear at any time of its choosing.

But what about the near future? Actually that looks even worse for China. Its overly aggressive military posture & the perception of a dominant China has forced other nations to build their own military, especially naval forces. In a global war, the Chinese Navy could find itself facing the Japanese Navy in the Pacific and the Indian Navy in the Indian Ocean besides trying to defend its homeland against US missile & air force bombers.

The one man who saw & understood China’s weakness was Candidate Donald Trump in 2016. He, as President, has been steadfast in improving US leverage over China in trade negotiations. That brings us to the biggest risk to China over the next few years.

Just as it did after the 2008 financial crisis, China is trying to proclaim & convince the world that they handled CoronaVirus better than America did and that shows their system is better than America’s. We think this will turn out to be even more false than their similar claim in 2008-2009.

They don’t seem to realize that China’s brand has been very badly damaged by its selfish & dishonest behavior about the CoronaVirus. Look what EU’s chief diplomat said recently: 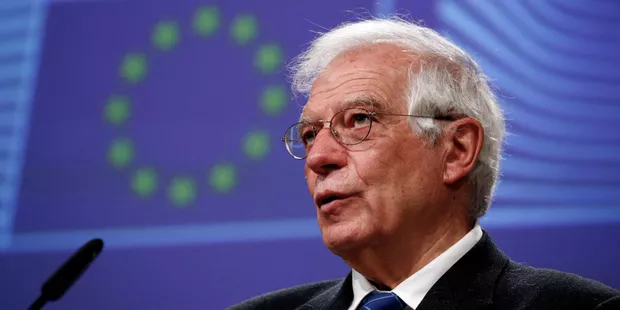 This sounds soft but it is an incredibly bold & hostile statement in diplomatic speak. This is a sign that the entire world blames China for the horrendous damage inflicted on their economies by CoronaVirus that originated in China. Not just for its origin but much more so for the lying, subterfuge & dishonesty of Chinese leadership that let the virus spread to the entire world. This is where the entire world agrees with President Trump, even though they might not like his blunt characterizations.

Clearly supply chains based in China are a great Chinese asset & have been very profitable for large US  companies. But now excessive dependence on any one country like China has been demonstrated to be an existential danger to both the multinational companies & to their countries of origin.

This realization is a grave danger to China’s dominance in offshore manufacturing. And the US is now determined to migrate its critical supply chains, esp. food & pharmaceutical chains, out of China. This can be painful & elaborate but it is not or even very difficult. All it needs is resolve and China-CoronaVirus has provided this resolve.

The Trump Administration will not rock the supply chain boat but they have already begun discussing steps to get to the eventual goal.

One big step favored by White House Trade Advisor Peter Navarro might be an executive order signed by President Trump requiring federal agencies to purchase only American-made medical products. A huge & reliable buyer like the U.S. Federal Government might suffice to force U.S. firms to boost production in America. Another step under consideration is an executive order to ban the Federal Thrift Savings Plan from investing its planned $50 billion investment in an index fund that contains Chinese companies.

Then there is the longer term strategic plan to create, per Reuters, “an alliance of “trusted partners” dubbed the “Economic Prosperity Network,” … It would include companies and civil society groups operating under the same set of standards on everything from digital business, energy and infrastructure to research, trade, education and commerce, … ”

And specifically, “Secretary of State Michael Pompeo last month said the U.S. was working with India, Australia, Japan, New Zealand, South Korea and Vietnam on how to “restructure these supply chains to prevent something like this from ever happening again.””

So the Chinese concept of crisis being another name for opportunity could actually come true for India?

The last has been a huge problem because,

“… investors keen on setting up a factory in India need to acquire land on their own. The process, in some cases, delays the project as it involves negotiating with small plot owners to part with their holding. … “

This has led companies from Saudi Aramco to Korea’s Posco to postpone or shelve their plans to invest in India, as most know. The one exception to this Indian rule was Narendra Modi during his tenure as the Chief Minister of the State of Gujarat. He became famous for clearing all bottlenecks including land to get companies to build factories in Gujarat state. Remember what he did to persuade Tata Motors in 2014?

That Modi of Gujarat is baackkk, it seems. According to a Bloomberg article,

These are coastal states with easy access to ports & a decent road infrastructure. And,

According to another article,

None of this would have been considered had the Indian economy not been forced to shut down because of CoronaVirus. We all know the cup & the lip proverb BUT an India that is a viable long-term alternative to China in offshore manufacturing would be a game changer.

We honestly & realistically believe that the election of President Donald Trump in 2016 was the beginning of a downturn in China’s capability of becoming a global superpower. We all saw that in Chinese concessions in the first trade deal between US & China. We do believe that China’s stupid & selfish handling of the CoronaVirus pandemic will accelerate this downturn. The World is now acutely aware of the risk to their societies from China, both financially & medically.

The big question is does today’s resolve & focus on China get maintained if President Trump does not get re-elected? We seriously doubt it.