This week conclusively demonstrated that the Numero Uno factor in the rally has been the upcoming stimulus. Look what happened on Tuesday when President Trump tweeted that he had pulled his team out of the stimulus negotiations. The Dow fell 500 points from that point to close down 376 points. That is not what President Trump wanted. So he tweeted overnight about his willingness for targeted stimulus for American people & airlines. That brought back optimistic hope and Wednesday saw a 530 point rally with outperformance by Russell 2000 & Transports.

Those stimulus plays hit a wall on Friday afternoon after Senate Majority leader said he doesn’t have room to do a stimulus before the election. Even CNBC’s Bob Pisani remarked “seeing a bit of reversion in stimulus plays“.

Leader McConnell has one over-riding priority – confirming Judge Barrett for the Supreme Court. The hearings begin next week. Republicans are united on this nomination and nothing is more important at this stage to Republicans. The GOP’s control of the Senate could ride on this success or failure.

Secondly, Leader McConnell’s “inability” to consider the stimulus bill is actually quite convenient to the President. He can openly ask for a much bigger stimulus bill than the $2.2 Trillion Democrats. Because the Senate doesn’t have room on their calendar, he doesn’t have to force recalcitrant GOP Senators to pass a bill that goes against GOP’s core principles. On top of it, he can realistically blame Democrats for their refusal to get a deal in the past two weeks.

Now President Trump can freely campaign on a massive infrastructure bill that will be the hallmark of his second term and promise to work on it the day after his re-election. Let’s be honest about the stock market too. The markets just need a realistic hope of a big stimulus bill coming soon after the election. And now the markets will get that regardless of who wins the Presidential election and, possibly, even regardless of who controls the Senate.

Wily McConnell! What an ally he has been for President Trump! And Pelosi can’t even go nuclear on him because he is so gently soft spoken.

Is this why BAML’s Hartnett now says that the top in S&P will come between the election & Inauguration? And that too at 3600? And he adds (courtesy of The Market Ear) that “Q4 equity capitulation driven by low and stable credit spreads and bond/fx volatility (note MOVE moved big this week)“.

But we don’t need Hartnett to tell us about low & stable credit spreads. Our own favorite indicator keeps saying that:

Leveraged DPG was up 4.3% this week while unleveraged HYG was only up 1.4%. So credit spreads are low & stable and VIX continues to fall (down 10% this week). We got visible demonstration of the “cure” that the Regeneron therapy provides and another positive news from Lilly. Why wouldn’t stocks go up under these conditions?

Speaking of VIX, look what a smart guru tweeted on Wednesday:

How bloated is the premium in November futures? According to Bob Lang, “now more than a whopping 20% difference between nov future and cash“.

What might shed that bloated premium in Nov futures?

By now everyone knows that the Powell Fed is refusing to do what they need to do to arrest the slow contraction in the slope of the recovery and dumping all responsibility on the Congress to act knowing fully well the Congress will not act before the election.

So far the bet seems to be relatively safe. Rates along the Treasury curve rose hard all week in a bear steepening:

Correspondingly TLT was down 1.4% on the week and EDV was down 1.9%. And Morgan Stanley’s Matt Hornbach (previously a bond bull) made a realistic case on Bloomberg Real Yield for Treasury rates to go higher including the 30-year yield going above 2%:

Now much of this was driven during the past two weeks because of expectations of a massive stimulus. So what happened after Leader McConnell put a kibosh on taking up the stimulus bill in the next 3 weeks before the election:

TLT was falling and rates along the 30-10 year curve were going up until comments of Leader McConnell crossed the tape after 12:10 pm or so. TLT closed up 1 point higher and the 30-yr yield gave up all the rise of the morning to close flat.

Stimulus is a hope but current inflation is the reality, especially in Europe: 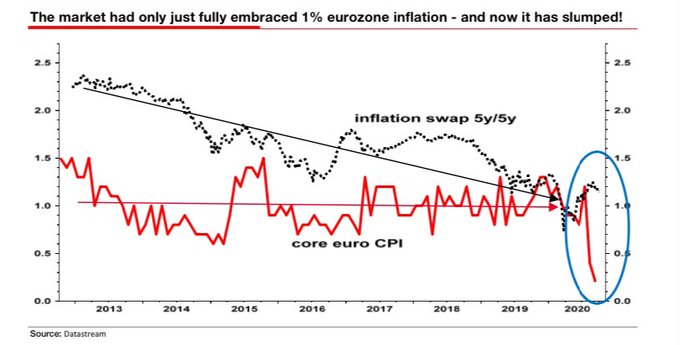 Hmmm! And this week a firm that has curve steepening as a strategic trade put out a tactical trade recommendation for a curve flattener. The Market Ear reports the key points of Mizuho:

What could be such a correlation of Treasury flatteners to say QQQ & IWM, the Russell 2000 ETF? It is widely accepted that NDX PE goes higher when 30-year Treasury rates go lower. In contrast, Russell 2000 is positively correlated to economic growth which is to rates going higher in a Treasury steepener. And IWM has outperformed QQQ by almost 6% in the past 10 days.

So is there any suggestion in the QQQ-IWM ratio that might support the above Treasury flattener trade (rates falling) of Mizuho? Since a picture is worth lots of words, below is a chart of the NASDAQ-RUSSELL ratio from Market Ear: 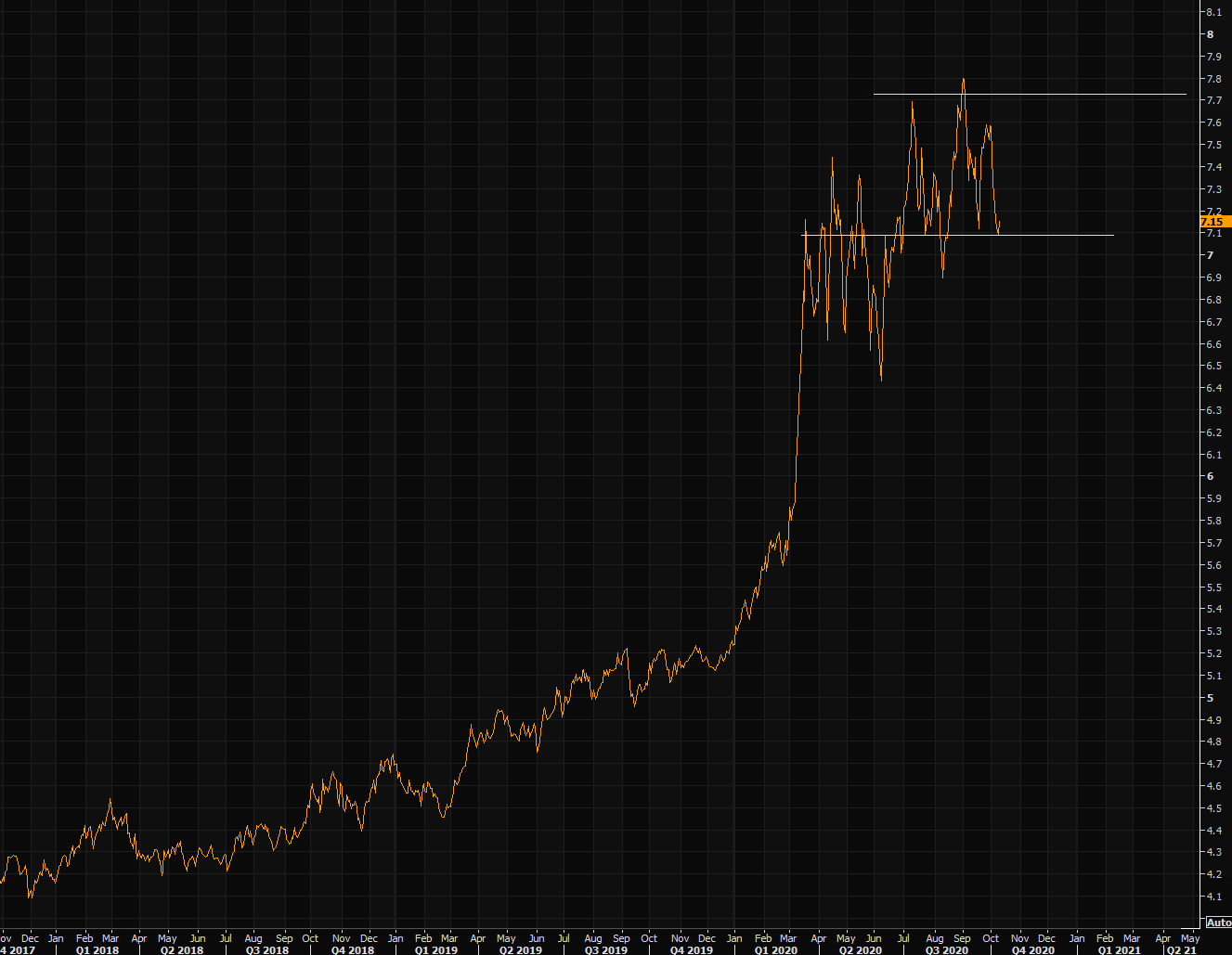 What if Treasury rates do fall and inflation data starts coming in weaker? Would you say that Powell’s bet of doing nothing but pressuring the Congress has backfired?

The U.S. Dollar fell by about 80 bps on the week. This looks worse on a chart, say like the one below: 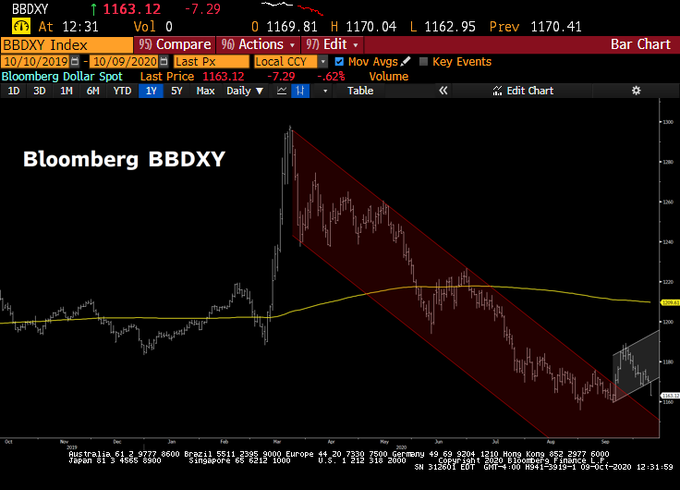 How did commodities react to such a falling Dollar?

Even the smaller & weaker parts of the energy market are looking good: 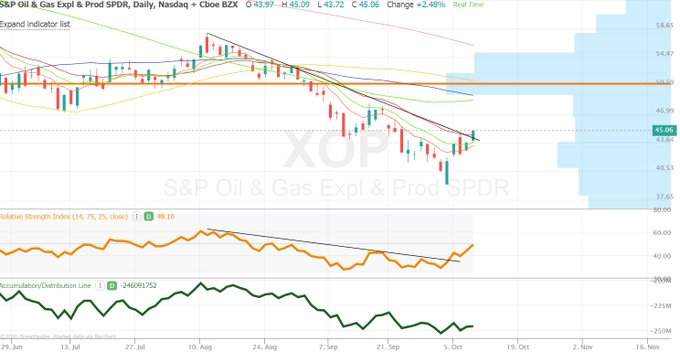 Speaking of correlation, if QQQ tactically outperforms IWM from here, if Treasury curve flattens then would the Dollar stabilize? If it does, will Gold, Silver, Copper give back a bit of their recent gains?

Did you know this week was Taiwan’s National Day? We didn’t hear it or see the Administration wish Taiwan on this day. Guess who did? It was a new & a big statement indeed. 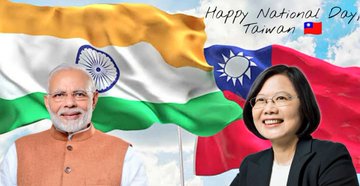 5. An example for US Fin TV to emulate?

We have suggested to a couple of Fin TV networks that they should implement a Frequent Viewer type program that delivers rewards to viewers who watch a lot of their programming. So far, no network has taken us up on this sensible & smart idea.

Perhaps they can take a page out of NDTV’s book; NDTV being an Indian TV channel in which many US media companies had invested: 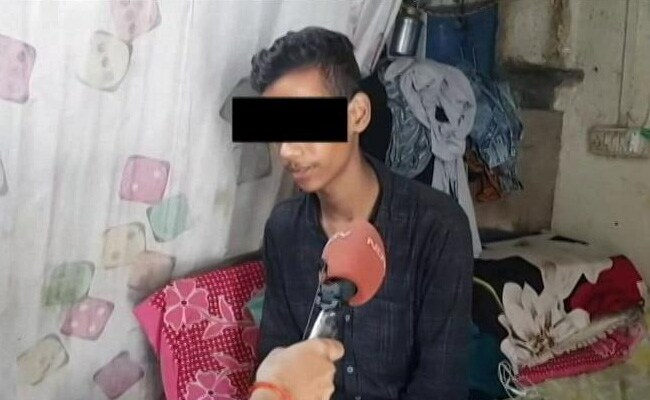