But for the month, S&P was only up 55 bps, NDX was down 1.3% and TLT was down 17 bps. So that fit the “grinding 70 bps expected return” laid out by Nomura’s Charlie McElligott on April 30, as we reminded readers last week.

The real action was in Emerging Markets both this week and this month. Broad EM ETFs beat the S&P handily on both counts. But the absolute star was Brazil with EWZ up 5.2% this week and up 9.5% this month. And the star of stars for the month was Petrobras, the stock we discussed on May 7 remembering Mark Fisher’s great call in February 2016. Yes. PBR was up 20% this month.

As we found out from @Macrovoices & Larry McDonald that India & Oil may be closely related next year & beyond despite their inverse correlation forever. More on that & Larry McDonald later.

The voice that proved right in the March decline in Nasdaq stocks spoke up twice this week. First, 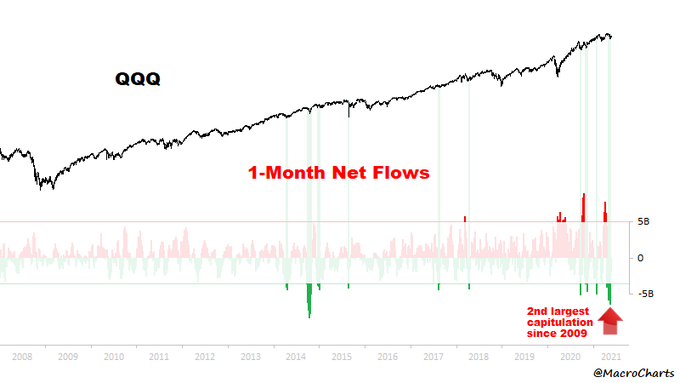 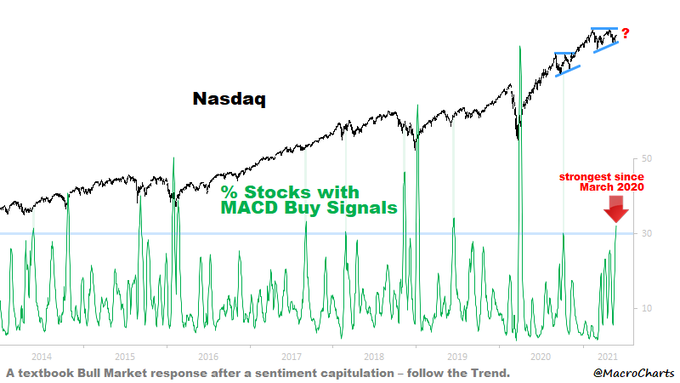 This strength might have had something to do with David Tepper’s comments as articulated via Jim Cramer – that he is bearish on Bonds but if the message the Bond market is sending is correct, then FAANGs are the cheapest stocks in the market. Except only the FMG performed this week (Facebook, Microsoft, Google).

Kinda consistent with that was the following on Friday: 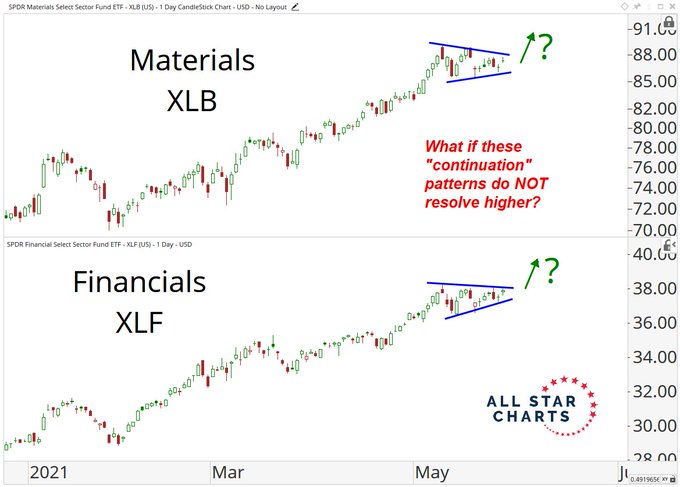 Parets elaborated in this piece:

What was one asset class (if it is actually one such class) that gave excess return this week & for the entire month? VIX was down 10% for the month and a whopping 16.8% this week. So in the VIX Spike (Lawrence McMillan) vs. VIX Swell (Mark Sebastien via Cramer) battle, McMillan is right so far:

Yes, one is not supposed to qualify signals, but could the observation below be something to ponder? 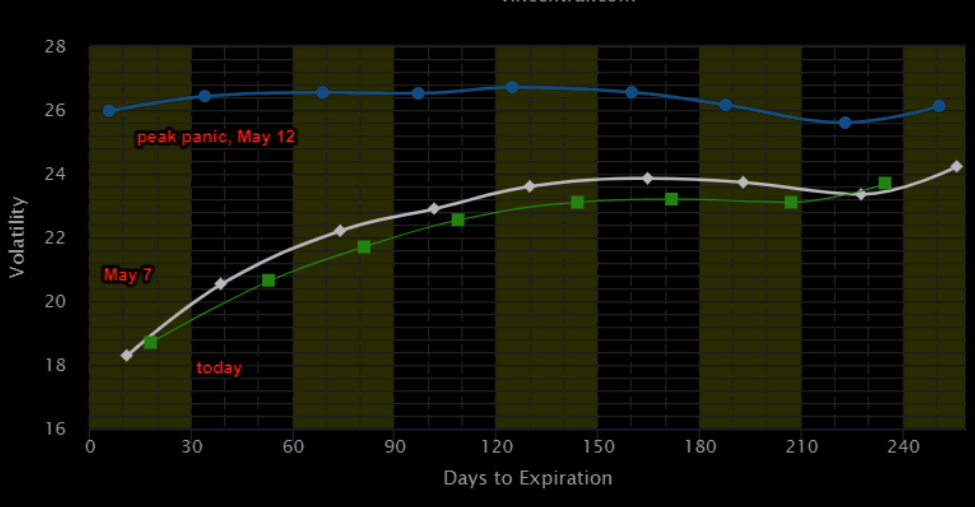 Then came the “hammer candle” observation: 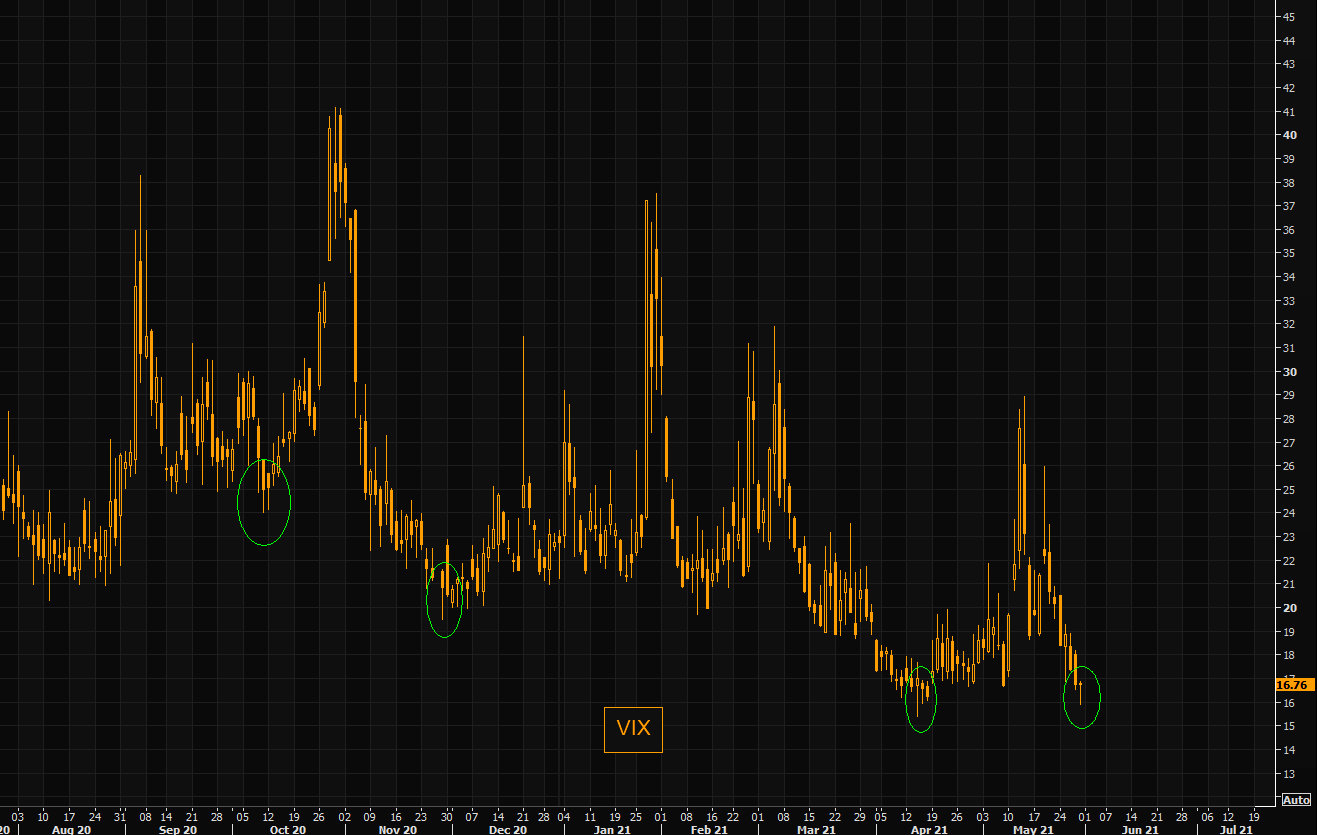 VIX closed at 16.76 on Friday just above the 16.69 low three weeks ago on May 7. And Monday is a holiday for exchanges. Mean anything? 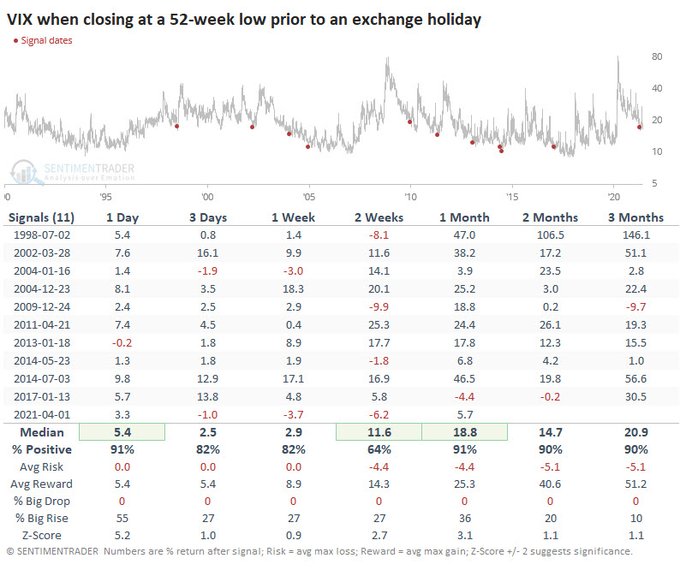 Given this conflict between gurus, how can simple folks decide? Lawrence McMillan of Option Strategist gave one way in his Friday’s article:

When might some one say something to break this range? June 16th perhaps, either in the FOMC statement or in the Powell presser?

The real action in Treasury rates was on Friday. Rates arose initially after the numbers at 8:30 am, numbers that were hotter than expected:

But then rates began to give up gains & went negative by early afternoon to close about 2.7 bps lower in long duration maturities. The rest of the curve was ho-hum for the week except for the 30-year which closed down 2.4 bps on the week. 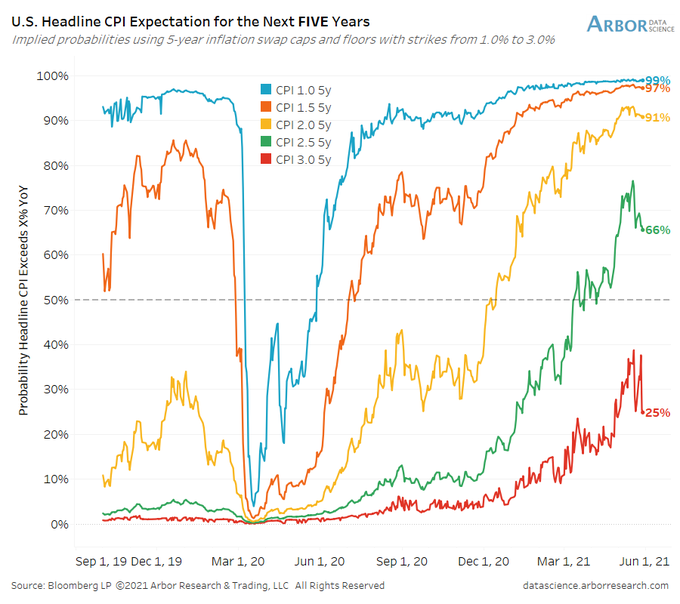 Another reason might be what Blackrock’s Rick Rieder highlighted couple of months ago that the Treasury was going to send $800 billion in cash to the Fed at the same time when the Fed was caught in a markets-DemPols pincer about the “Supplementary Leverage Ratio”.

Did anything happen on Thursday? Institutions placed a record $485 billion in cash on Thursday at the Federal Reserve’s overnight reverse repurchase facility. We urge all to read the Bloomberg article by Brian Chappatta titled “The Fed Is Mopping Up Its Own Mess in Reverse Repo“. He elaborates:

If that is not enough, look what he tweeted on Friday:

A Federal Agency paper auctioned at a negative yield? And the yahoos keep talking on Fin TV about a “taper”?

There is already a flood of money coming into money market funds from nervous investors & from these funds into the Fed. What if we get a reasonable stock market correction & investors sell, what would that influx of cash to do the Fed’s reverse repo? Why do you think the 2-year & 5-year Treasury auctions got so much demand?

Now in this mess, the Fed is going to reduce its Treasury purchases? If they do so at the shorter end, they almost have to buy the same amount at the longer end? Can you spell Yield Curve Control or a Twist? So should we cry or laugh at this utter mess?

We prefer to laugh & sing in both versions:

And the Bollywood version:

Now comes the crying, beginning with a gulp: 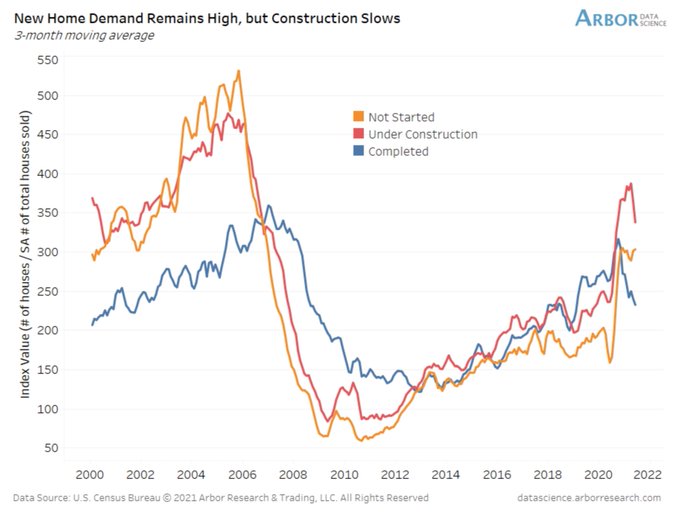 Then a scary look ahead courtesy of Tom McClellan’s article Real Estate Boom in 2021 is Fueled By Demographics:

Now tears of fear from someone utterly misnamed as “Rosie“:

Listen to this podcast, we suggest. 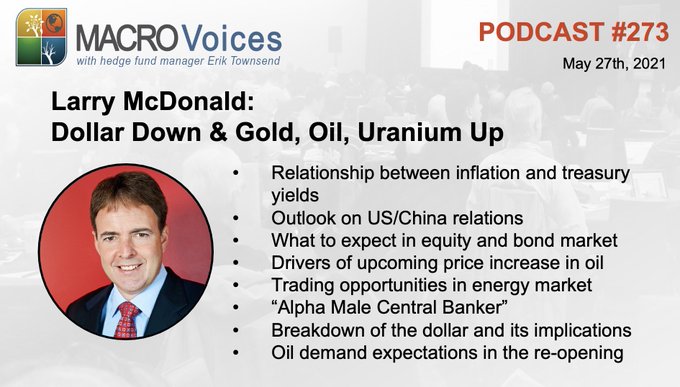 Commodities came back this week with CLF up 11.8%, Copper, Gold, Silver & Oil all up. Speaking about reopenings & commodities, look what Larry McDonald said in the above podcast:

What does this mean for or because of ESG? LarryM said:

And even a better trade from his vantage point is buying Uranium ETFs with the entire Uranium market cap being $21-22 billion.

Before all that, the big question is what President Biden does with Fed Chairman Powell. That might be a good indication of how much the Administration wants to spend before the November 2021 election.