Chuck Daly, the championship coach of the Detroit Pistons, had a dictum about his successful plays – “keep running it until they figure out how to stop it”. Those who followed this sagaciously simple dictum are feeling happy now.

What play are we talking out? As we wrote two weeks ago, the Fed, at least the power duo of Powell & Brainard, are now committed to stomping on the stock rally. Powell did it first on Monday March 21, 3 days after his dovishly bullish presser at the March FOMC. He couldn’t deliver the results. So on Tuesday March 5, Brainard threatened Rapid QT and that did the trick as you can see below:

So we wrote last week about the new Numero Uno factor in the markets – Fed posturing.  That naturally leads to a play – Buy S&P puts before Fedspeak, especially speak of Powell/Brainard. Any one who did so this Thursday & Friday was happy about Thursday’s massive reversal and even happier after Friday’s carnage.

The carnage was bad because Powell spoke twice, first on Thursday with IMF & then on Friday with Yellen. Why would Powell do this just 8 days before his FOMC presser on May 4? David Rosenberg said it succinctly & precisely on Friday April 23:

The “pure lunacy” of this was pointed out by Larry McDonald on Monday, April 18:

It was David Rosenberg who voiced the fear we felt on Friday into the close:

What play would Chuck Daly have called into Friday’s close? Buy S&P puts expiring Monday 4/25 evening. If you lose, you lose small. If you win, you might hit a mini version of Dark Monday October 19, 87.

Let us look at the week:

Treasury yields were up and furiously so at the short end:

Given the disclosed intensity of Fed’s rage against inflation, it was strange to see that basic materials & commodities were trashed late this past week:

David Rosenberg pointed out on Friday that “basic materials have not made a new cycle high since December 31“. 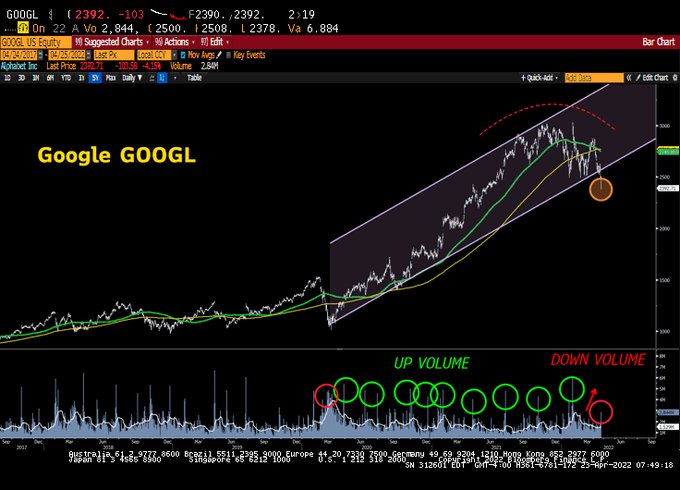 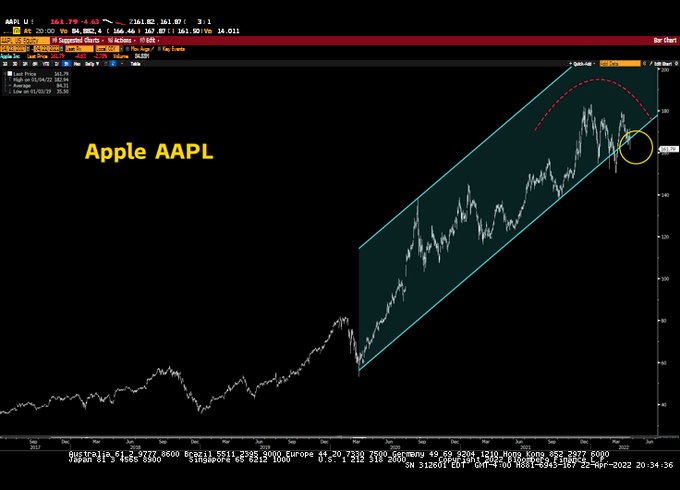 Then Carter Worth of CNBC Options Action said “its a very bad set up” and suggested another potentially 10% downside in QQQ.

Big Tech earnings on deck!@CarterBWorth charts the $QQQ for where we may be headed. @Michael_Khouw lays out a trade. @OptionsPlay's Tony Zhang gives his thoughts. pic.twitter.com/KQBO9R7PfM

Then a tweet that might be the most bearish of them all highlighting a condition that normally would be bullish but is bearish right now.

We have followed David Rosenberg for a long time. In that experience, we have learned that he is early, often way early. Sometime so much so early that following his advice early might lead to loss of quite a bit of capital. So we patiently read & listen. For example, he suggested buying 30-year Treasuries at the start of 2022 for reasons that seemed valid. Unfortunately, long duration Treasuries have suffered one of their worst starts of any year we recall, including 1994.

But there comes a time in each cycle when he begins proving correct and the economy, the Fed & the markets jointly act to make his ideas seem profitably actionable. We wonder whether Friday, April 22 would turn out to be the propitious time to listen to him and begin acting. Listen to him for 6 minutes & decide for yourselves. Some excerpts are below:

Finally as Dennis Gartman used to highlight the timeless caution from Hill Street Blues -“Let’s Be Careful Out There“.