There is such temptation to buy when you see steep declines in the stock market as we saw this Friday, April 29, & the previous Friday. But that is why one might remember the saying “discretion is better part of valor” or just listen to Carter Worth, CNBC Fast Money resident technician.

He reminded all his viewers that “the pre-condition of shocking weakness is weakness“. He also reminded viewers of the October 2008 fall of 23% in one week that was AFTER a whole year of weakness that began in October 2007 and the 17% decline in the stock market BEFORE the 20% fall on October 19, 1987. What about now? He slipped in his advice saying “its best to postpone all new buys“. Listen to him & look at his charts in the clip below:

For those who might want to know where the current selloff might end, hear Morgan Stanley’s Mike Wilson say between 3,800-3,900 on the S&P, about another 9% from Friday’s close. After Carter Worth’s examples above, this might seem like nothing to some. Wilson also says watch relative strength during the decline to decide what to buy after the bottom.

The above are symptoms in our view. The cause of all this has been one adjective & two letters. Lael Brainard threatened “Rapid QT” on the morning of April 5. Look what has happened since then:

This Rapid QT threat has been the absolute driving factor in markets since April 5 and not inflation or hike in rates. How could it not be? Look it is about selling a $9 trillion portfolio. And, as Larry McDonald said last week, this selling is being done by a group of people who have NEVER SAT in a Risk-seat. No wonder they are failing miserably at even talking about QT.

They are not the only ones. Every talking-head on TV is angrily babbling about inflation or shimflation. We keep hearing that the Treasury market has priced in so-many rate hikes etc. But we have never heard any one say the markets have priced in “Rapid QT”.

A part of us wishes that the Fed screws it up thoroughly this coming Wednesday and we get a calamitous sell-off from Thursday to the following Monday. A nice 20% fall to 3,300, or better still 3,000, on the S&P by Monday May 9 might even get Carter Worth to say Buy, especially after the Fed comes in on Tuesday May 10 morning & postpones QT.

We are not against QT or balance sheet reduction. Just like we are not against regulating ETFs. But does any one want to see BlackRock’s Larry Fink say that he is going to rapidly sell off assets in BlackRock ETFs? How much carnage will that cause as everyone front-runs their selling before BlackRock does? So why is it any different for a $9 trillion portfolio managed by talking heads with ZERO experience in buying or selling?

Finally about a G-level that may have at least a little to do with effects of selling big trading books: 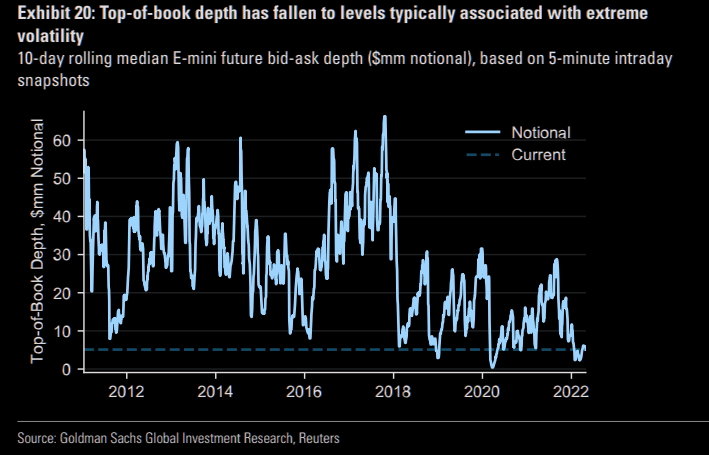 The pyre is full & ready. So a Fed that wants demand destruction has simply to light a match in Powell’s presser on Wednesday. On the other hand, the Fed can create a spectacular bonfire of the shorts by announcing a postponement of QT on Wednesday.

3. A powerful rally to highs

The almighty Dollar has raced to new highs thanks to Brainard’s “Rapid QT” threat. Why is this relevant?

A negative reality is that the rise of the Dollar & the fears of global inflation, especially food & energy inflation, is beyond the Fed. It stems from a completely untested weapon used for an emotionally moral purpose. Instead of intervening physically in Ukraine, the Biden Administration launched a war on Russia’s economy & finances using financial sanctions.

The global economy has been an unintended victim and that is now beginning to help Russia end its isolation. Russia is threatening to shut off gas from European countries unless they pay in Rubles and, as Bloomberg reports, “Europe is being to splinter” on this issue. Reportedly “four European gas buyers have already paid for supplies in rubles and 10 have set up accounts” allowing them to comply with the new Russian rules.

A New York Times article revealed the scope of the problem:

The article not only points out the impact on Africa, but also points to Europe:

This week we read that “many farmers” in Brazil “are considering cutting fertilizer usage due to higher prices and shortages. According to fertilizer industry sources, only about 15% of Brazil’s agriculture areas may sustain itself without fertilizers“.  Brazil is a large exporter of food but it is simultaneously one of the largest importers of fertilizers used in its food production.

Guess who is the biggest exporter of fertilizers in addition to wheat – Ukraine-Russia. In that context,

Recall that Odessa is the largest port in Ukraine. It is already blockaded by Russian Navy and now Russia is beginning to attack the city with missiles. Look at the Al-Jazeera map as of April 30: 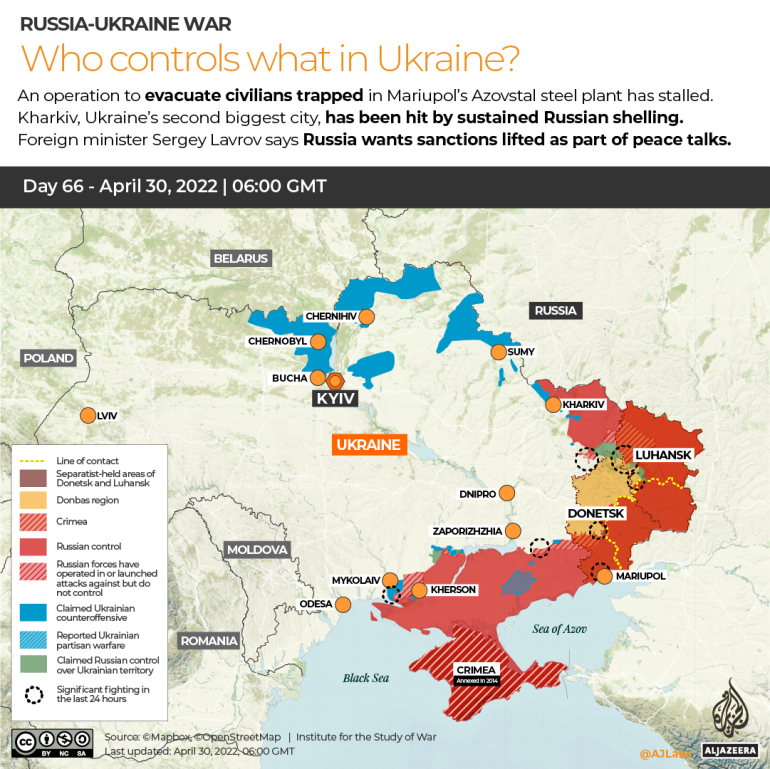 The reality is that, unlike other theaters like Afghanistan, Iraq & Africa, the Ukraine-Russia conflict is causing alarming damage to the entire world. Not just macro damage but severe day-to-day hardships. Are these hardships because of commodity-retaliations by Russia against imposition of financial sanctions against Russia? We don’t know but neither does any one we read.

But we saw one huge sign that suggests that even Europe is getting tired of this conflict.  Speaking this week at the 14th European media summit, the Foreign Minister of Austria, Alexander Schallenberg, said Ukraine should not obtain European Union membership this June.  Not membership of NATO but even of EU. Recall that Ukraine can only become an EU member with unanimous consent of all EU members.

Finally speaking to the physical war, we read something different on April 26 in ISW’s  Russian Offensive Campaign Assessment, a change from their previous negative assessment of Russian military & its tactics:

For a more updated view, watch the clip below dated April 29:

5. “a moment of strategic inflection“

Last week, we discussed the divergence between America & India regarding Russia and shared why we think the 2+2 meeting between US & India had actually galvanized the USA-India relationship to a higher & more meaningful level.

This week we came across comments about the US-India relationship made by US Secretary of State, Antony Blinken, at a Congressional Hearing by the Senate Appropriations Committee of State, Foreign Operations. A few of the comments are below:

You may a get a better sense by actually listening to Secretary Blinken make his points to the Congressional Subcommittee: