Summary – A top-down review of interesting calls and comments made last week about monetary policy, economics, stocks, bonds & commodities. This week, we review the Jackson Hole meeting, Yellen-Draghi speeches & the stock market rally. Also did Fibonacci discover the numbers or were they discovered & used 100 years before him? TACs is our acronym for Tweets, Articles, & Clips – our basic inputs for this article.

For once, the stock market did not do much after the combined vocal stimulus from Fed Chair Yellen & ECB chief Draghi. Simply because it was all factored in the prior 4 days of the week, 4 days that featured a 2% move in the Dow and a new high in the NYSE advance-decline line. This changed a one well-known mind. Back on July 31st, Tom McClellan had described a composite indicator (Shiller’s CAPE divided by Moody’s BAA yield) that suggested a major top forming in the US stock market. This Thursday, McClellan said on CNBC Closing Bell:

This is another example of how the old indicators & intermediate term technician stuff keeps getting run over by the stock market that only recognizes Fed-provided liquidity. The only technical work that has worked is the short term stuff. That is why we began focusing on such ideas & predictions for the past several weeks.

Chair Yellen may not have moved the stock market but she had a big impact on the Treasury curve. The 30-5 year yield curve steepened by 7 basis points on Friday alone with 30-year yield falling by 3.6 bps while the 5-year yield rose by 3.3 bps. The 30-5 yr curve closed at 150 bps, a level last seen in early 2009, before the big stock rally began in March 2009. This is the strongest message of slowing growth ahead in our empirical view. Others seem to agree on Friday: 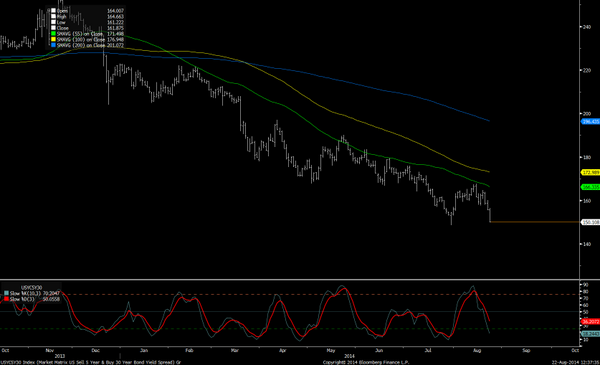 We know that David Rosenberg has described the possibility of a slowdown arising from a tightening by the Fed as “lunacy”. But the treasury market seems to differ as it differed by sharply steepening on Friday and by steepening all year.

The economic data released on Thursday also told this story based on a classic indicator – behavior of Leading Indicators vs. Coincident Indicators:

But what about the direction of the 10-year Treasury yield?

Minerd says in this article:

Rick Santelli said on Wednesday that yields of long maturity treasuries tend to be highest on the days Fed statements or minutes are released. He called it this week because the peak on yields this week came on Wednesday afternoon & the 30-yr yield fell by 6 bps from Wednesday to Friday.

We are not sure what some expected from Draghi. But they were disappointed a bit by it:

This is what “smart money” wanted according to: 3. U.S. Equities
Those who are surprised by the rally of the past two weeks should look at and remember:

This has worked because the primary force underneath the US market remains stronger than any negative forces that have hit the market.
The man who wrote about the decline in early August is now suggesting a move up: 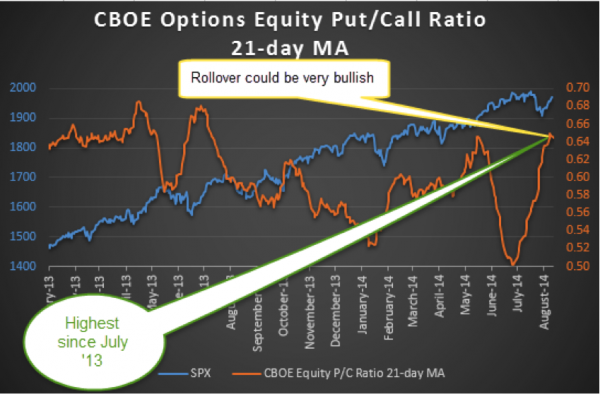 Detrick wrote:
Bulls remained bulls this week and some bears to became uber-bulls:

We could not find any negative calls this week except valuation & sentiment warnings like the couple below:
Two weeks ago, we pointed out that not finding bullish calls on the US stock market has become an empirical bullish indicator for us. Has inability to find bearish calls been a bearish indicator as well? Not really, empirically speaking.
4. Emerging Markets
Michael Hartnett of BAC-Merrill Lynch reported a tactical EM Sell Signal this week. Such signals have historically resulted in 200 bps of underperformance of EM over DM.  A warning sign also came from:
Chris Burba writes in the article:
On the bullish side, you have well-known hedge fund manager John Burbank of Passport Capital speaking bullishly about investing in Saudi Arabia. He made this call in a detailed discussion on BTV Market Makers on Monday.
On the other side of Hartnett is Peter Marber of Loomis Sayles who simply said “It is a good time to put it anywhere in emerging markets“. His own move is into China & out of Frontier Markets which are up 17% this year on an index basis.
5. Gold, Silver & Commodities
Two positive calls on Gold & Gold miners:

Jeff Cooper made an interesting point in his Minyanville article titled The True Move in Gold Has Yet to Reveal Itself.
What about Silver? Parets writes in his article:

But can Silver break without Gold breaking as well? We don’t know and Parets doesn’t say.

Manjul Bhargava (pronounced Bhargav with silent “a” suffix), a Princeton professor of Mathematics, was awarded the Fields Medal (with three others) on August 12 at the International Congress of Mathematics held in Seoul. Unlike the annual Nobel Prize, the Fields medal is awarded once in 4 years and is only awarded to Mathematicians who are less than 40 year old. This makes it much harder to win a Fields Medal than a Nobel Prize, statistically speaking.

Any one who discusses investing has heard of of Fibonacci numbers. But hardly anyone, us included, knew that Fibonacci was not the first to discover these series of numbers. Read what Professor Bhargava said in his interview with India Today:

We don’t expect any one in the US to acknowledge Hemachandra (again short “a”) for his discovery of numbers that are credited to Fibonacci. Professor Bhargava knows this only because he is fluent in Sanskrut which very very few Indians are. But we are indebted to Prof. Bhargava for teaching us what Hemachandra did and we shall, from now on, refer to these as Hemachandra (Fibonacci) numbers.

Perhaps, Prof. Bhargav may not be aware of the importance of these numbers in investing or, perhaps, he may be using these numbers to trade stocks himself.  This would be an interesting discussion either with Tom Keene or with Adami-Modi.

By the way, as more research is done about old Sanskrut texts, the world is discovering what Indians knew in the first CE millenium. For example, the discoveries that earth rotates around itself and revolves around the sun in an elliptic orbit had been made by Indian astronomers some 1,000 years before Copernicus & Galileo.

And this old knowledge was not restricted to India. It is now documented that the Piston, the mainstay of the Industrial Revolution, was used in the Roman era. PS: The name Bhargava, phonetically written as Bhaargav, means descendant of Bhrugu, one of the seven most ancient sages of Indian Philosophy. So Prof. Manjul has lived up to his illustrious last name. Kudos to him.