that Ukraine-Russia rules the roost in financial markets? The Dow was up 70 odd points on Friday morning en route to a great week when news hit the tape that Ukrainian forces had destroyed a Russian convoy. The Algos went hyper & the Dow fell 80 points or so in a couple of minutes and went down triple digits later in the morning, VIX shot up to 15 and the 10-year treasury yield collapsed to 2.31%. Later in the afternoon, the stock market rallied with Nasdaq going positive and VIX fell back to a 12-handle. Perhaps, it was an unwind of the hysteria of the morning or the news that foreign ministers of Ukraine & Russia were going to meet in Berlin on Sunday evening.

Anything is possible in the hall of mirrors called foreign policy. In that vein, the most interesting comment came from CNBC Fast Money trader Tim Seymour on Friday afternoon:

His CNBC FM colleague Brian Kelly pooh-poohed the “de-escalation” notion and pointed out:

It is clear that the markets are deeply concerned about an overt invasion into Ukraine from Russia. So how likely is it and under what conditions might it happen?

What happened on Friday morning is weird if Stratfor is indeed correct in their assessment on Friday:

If Russia is able to deliver military support to Donetsk and if the separatists could deliver a setback for Ukrainian military, then the notion that Russia meekly allowed its convoy to be destroyed by Ukraine doesn’t make sense. Unless, as Tim Seymour’s sources said, the big news of Friday was indeed a show of giving Ukrainian President a public victory. The markets will tell us what’s what on Sunday night.

Despite the above, the stock market action was really a side show on Friday. The big story was the vertical fall in Treasury yields. Was it Ukraine, was it the global economy or was it just love?

The 10-year yield seemed to argue for a bit of both – 3 basis & plunge to 2.31% was Ukraine-related and the 5.5 bps drop to 2.34% was the global economy which seemed to have stunned both Bill Gross and David Rosenberg:

Add to this comments by Fed-head Kocherlakota on Friday morning:

So what about the Fed raising interest rates any time soon? Jeff Gundlach answered that on CNBC FM 1/2 on Friday:

Rick Santelli disputed the importance of 2.35% and said:

Guy Adami of CNBC FM has said for months that TLT, the long treasury ETF, would go to $115. This week, he raised his target to $125. Mike Harris of Campbell & Co. made a similar prediction on CNBC FM on Thursday:

Gundlach also said that the fall in yields is a momentum trade now driven by relative value over corresponding yields in Europe and added that 10-year at 2% has no investment value. Bill Gross essentially concurred when he said he did not expect the 10-year trade to fall below 2% with a US economy growing at 2% with 2.5% inflation.

What has the bond market done this year in the face of such expert opinion? Trashed it with its action. So will the 10-year yield break through 2% and laugh at Gross-Gundlach?

Thursday 1:00 pm feels like ancient history after the action on Friday. But we need to point out that the move in long treasuries was triggered by the strong 30-year treasury auction on Thursday. As they say, a chart is worth a thousand words:

Remember the last week of July 2014? We could not find any bullish guru on Friday, August 1 except:

Kudos to @Sassy-SPY. In our simplistic way, we had written then:

Both our simple-minded line & the prediction of @Sassy-SPY came true both last week and this week. This shows that the buy the dip tactic still works in this market. What does that suggest?

This brings us to a set of tweets from Friday, August 8, that we featured last week:

The first of the above two tweets proved right. Will the 2nd tweet above prove correct next week? We will find out. Now what about the intermediate or absolute direction?

Then you have the financials: 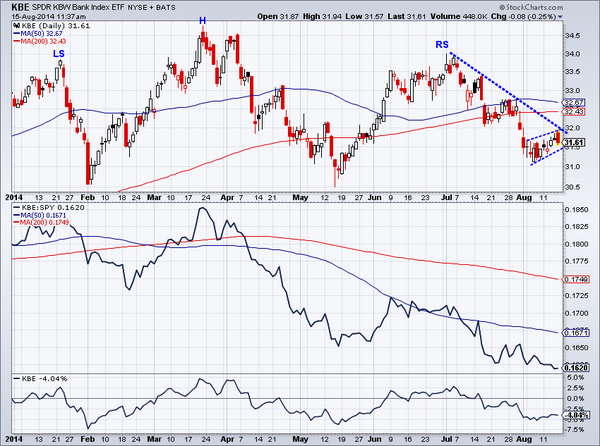 On a more positive note, Friday August 15 was Independence Day for India, one of the best stock markets of 2014. Keith McCullough of Hedgeye may or may not know that. But he celebrated it just the same on Thursday in his clip:

We admit once again that we have no clue how gold trades & why it trades the way it does. This frustration was expressed by a technician this week:

Some others took Friday morning’s slam in stride:

If Gold acts badly, Silver acts just ugly. But what about Corn?

His case is made in his article Here’s Why There Is A Trade In Corn. The trade recommendation worked this week & Parets took a bow on Friday