Summary – A top-down review of interesting calls and comments made last week about the flash crash in Treasuries, monetary policy, economics, stocks, bonds & commodities. TACs is our acronym for Tweets, Articles, & Clips – our basic inputs for this article.

Rick Santelli has seen far more bond action than we will ever see. And he said he has never seen anything like the incredible collapse in treasury yields on Wednesday morning. The 10-year yield dropped that morning to 1.86% and the 5-year yield to 1.10%. Yields sprung back very quickly but the specter of machines frantically seeking to buy Treasuries everywhere thereby creating a violent waterfall in yields will remain with all of us for a long time. The photo in the tweet below speaks eloquently: 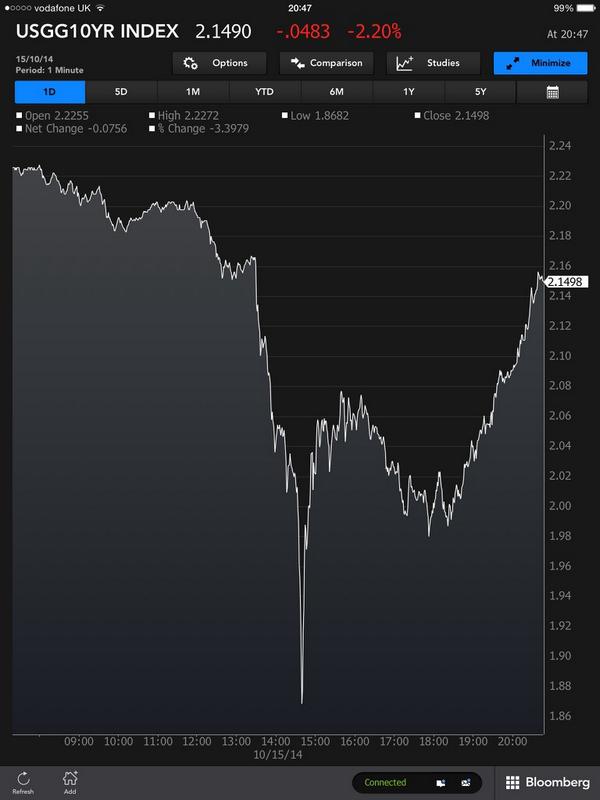 What we saw was massive liquidation of wrongly positioned assets. As soon as the liquidation was finished, yields sprung back very sharply. Rick Santelli said on Friday that the low yield levels of 1.86% on 10-yr & 1.10% on 5-yr will hold up for a very long time.

Will Treasury yields behave like that flash crash during the next couple of months or did we see the bottom in yields for 2014?

2. Wake up call for Central Banks?

Last week, we described deflation fears as a contagion sweeping the world. The flash crash in yields could be an evidence of the seriousness of the deflation scare in Europe. We have no doubt it woke up the Fed. James Bullard, President of the St. Louis Fed, spoke clearly to Michael McKee of BTV the next day:

The real question is whether the Fed will raise rates in 2015 or not. Martin Feldstein emphatically told BTV’s In The Loop viewers that the fed funds rate will rise to 1 -1.5% by the end of 2015. On the other hand, CNBC ex-anchor Ron Insana flatly said on CNBC Closing Bell that “Fed is going to do nothing next year“.

Martin Feldstein said on Friday on BTV In the Loop that he doesn’t see “anything in the foreseeable future that looks like a recession“. Rich Bernstein told CNBC’s Becky Quick on Friday that “economic fundamentals that would normally associate with a bear market or recession are nowhere to be seen“. David Rosenberg wrote on Friday that “Bear markets need a recession and that simply does not look in the cards.” This view is also the oft-repeated view of Leon Cooperman. Larry Fink said on Squawk Box this week that those who can stomach the volatility should invest in this stock market.

Rich Bernstein, Larry Fink, and David Rosenberg have been far more right than wrong in the past. And all three explicitly warned investors in 2007 about the dangers they saw in those markets. Those who listened to them in 2007 saved  themselves a great deal of money & pain. So we listen when they talk.

4. Signs of something malevolent?

In our September 26 TACs article, we had featured the following chart of Dana Lyons of JLyons Fund Management. He called his chart below The Most Important Trend Line in Equity Land. This Thursday he UPDATED the above chart as BROKEN. He wrote in his article:

Recall that the correction in July 2007 led to a new high in stock indices in October 2007 before the deluge.

Another trader sees a similar pattern evolving. In his article Shades of Grey: 2007 Edition, @NorthmanTrader writes:

We urge interested readers to read the entire article Shades of Grey:2007 Edition and study its charts. The above is merely a glimpse into the reasoning.

Until now, the powerful hand of the Fed has negated serious chart warnings of famed technicians. But now the hand of the Fed is about to be withdrawn and replaced by verbal guidance. Will that be enough to keep negating technical warnings or will the Fed/Draghi push more stimulus to prevent a roll over in the equity markets? 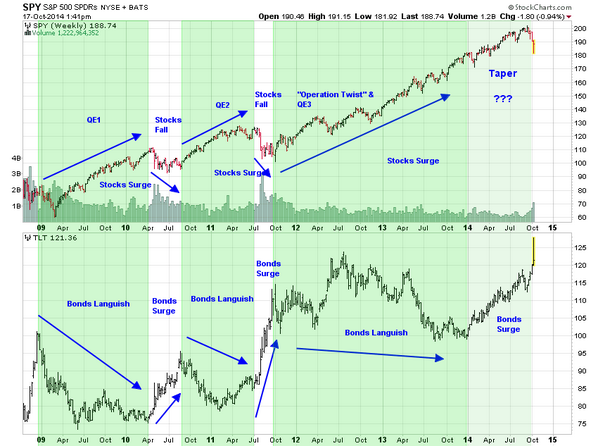 It is interesting that both the articles featured in the above section suggest another spike up to new highs. Does that mean stocks are now better than bonds? Yes, says the tweet below:

No, says J.C. Parets in his article on Thursday titled This Chart Still Suggests Buying Bonds and Selling Stocks with another 2007 reference. He wrote in his article:
What about large day traders who put their money every day where their thoughts are:
Two technicians argued that the rally that began on Thursday afternoon is to be faded already:

Speaking of the vicious rally in energy, especially XLE-OIH, Larry McDonald deserves kudos for his call and explanation on CNBC Closing Bell on Tuesday:

The stock rally on Thursday afternoon & Friday morning was indeed led by XLE & OIH. To his credit, McDonald took partial profits on the XLE & OIH trades on Friday afternoon. By the way, he is among that rare breed who are bullish on Gold Miners.

To our simplistic way of thinking, the vicious rally off the lows was led by Russell 2000 which outperformed the S&P for 3 straight days.  It was the one major index that was up 2.75% this week. But on Friday morning, it began to lose its rally and actually closed down on the day. And the S&P rally failed at 1900 on Friday and then closed below the 50-week moving average. Is this action worth noting or are we being fanciful? We will find out on Monday.

Until then, those who follow Art Cashin should marinate ice-cubes this weekend while purists like us will drink straight up.