was how David Rosenberg described the “headline and the details in the U.S. nonfarm payroll report” on Friday morning. Once again, the payroll report went against what had been built in. Bonds had been sold & yields had risen ahead of the past two payroll reports. This time, a savvy journalist like Greg Ip spoke of a softer report on Thursday evening. Such expectations had driven bond prices higher & yields lower by Thursday’s close:

The conditions were ripe for a sell off in TLT & long duration Treasuries. And they did as soon as the stunning 321,000 figure was released. TLT fell by a point and the entire treasury curve shot up in yield. Then something weird happened. Slowly TLT began to move up and by 9:15 am, it turned green. The 30-year yield was down 1 bps at that time. It did then start rising and stayed higher most of the day until it started falling in the afternoon. It closed up by a mere 1 bps despite the stunningly strong payroll report. This is tantamount to “the dog didn’t bark” messsage of Sherlock Holmes 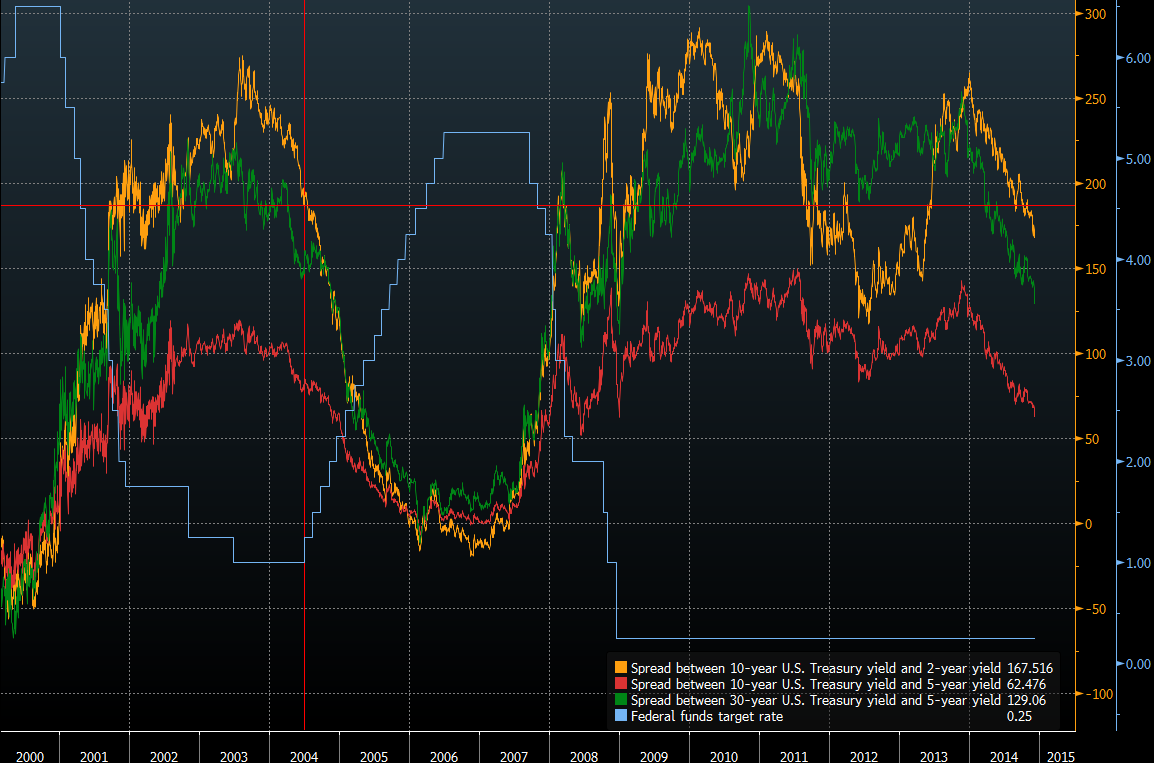 The reality is that 1-5 year curve is where the distortion is. And that distortion is being slowly removed as the data gets stronger. 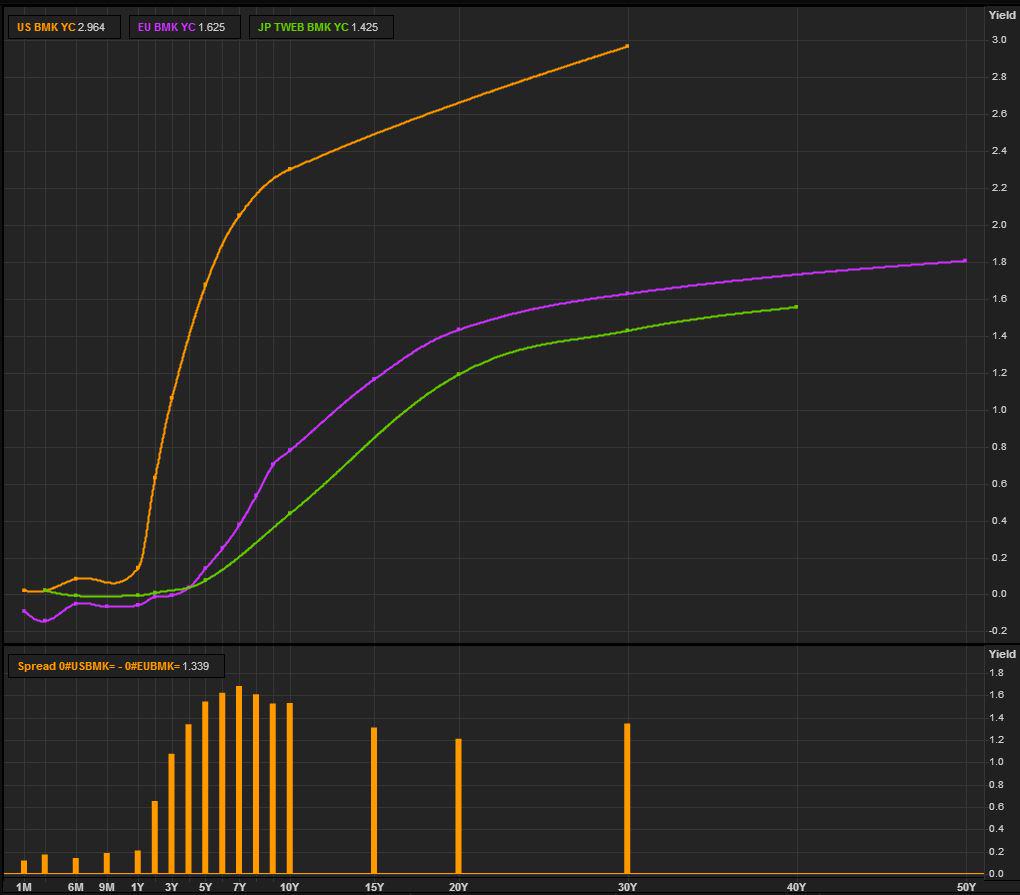 If the distortion in the 1-5 year curve gets removed by the bond market, then the Fed will finally be dragged into raising rates. And that, assuming flattening on strength continues, will end up giving us a flat yield curve “at a level previously thought unthinkable” as Jeffrey Gundlach put it last week. That is because inflation, the main driver of long duration yields, continues to go in one direction. 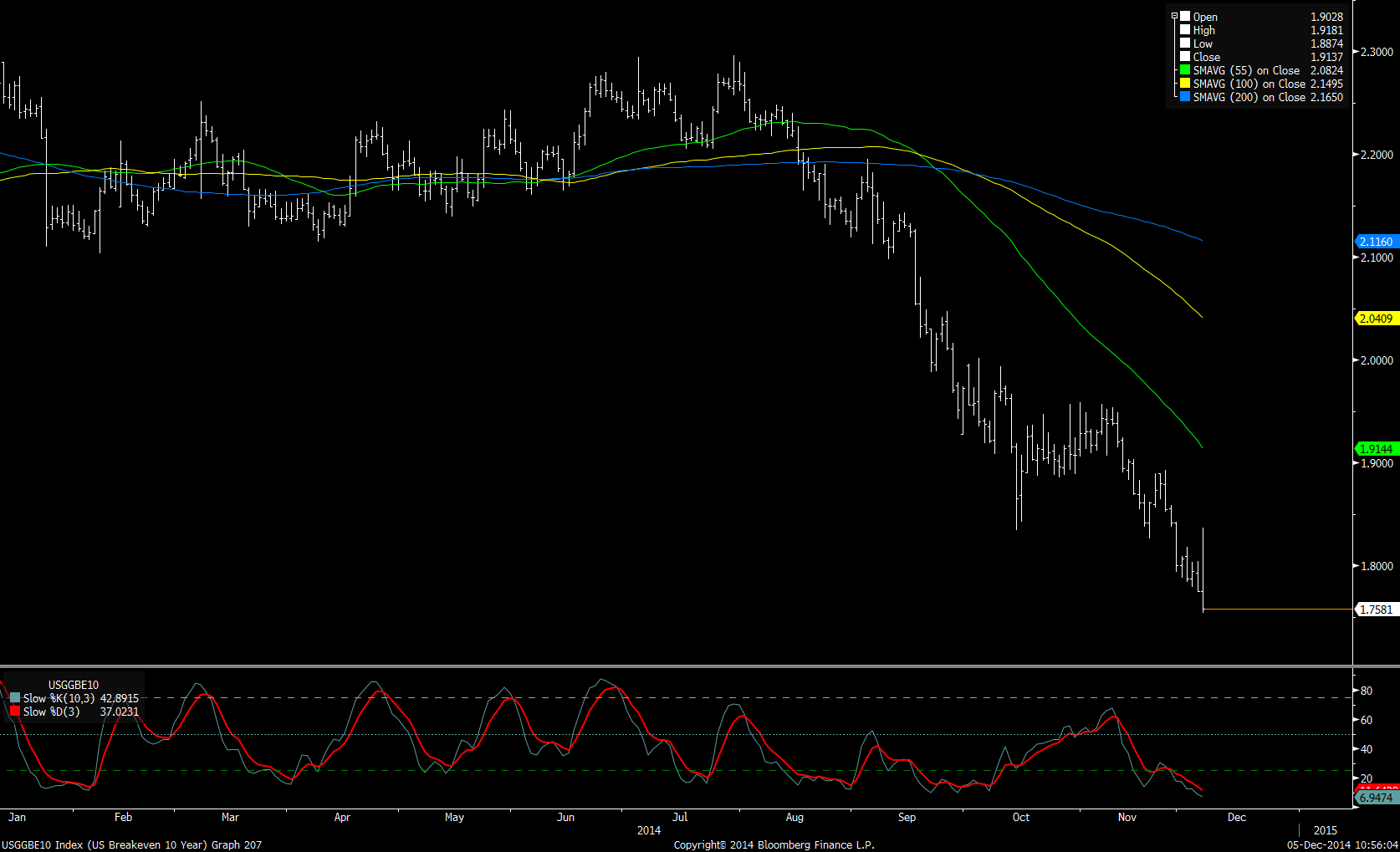 Perhaps the key to the action of the 30-year is the short positioning we described last week. Or perhaps it is due to the liability gap described by Larry Fink this week on CNBC Squawk Box:

Combine the move under 2% on the 10-year because of buying from insurance companies with a hawkish statement from the Fed on December 17 and add a strong payroll report in January – you can get a flat 2-10 curve around 2%. That would be in Gundlach’s category of “who wd have thunk it?“

The dominant trend of the second half of 2014 has been the rally in the US Dollar. And the Dollar reacted as it should have to the 321K payroll number: 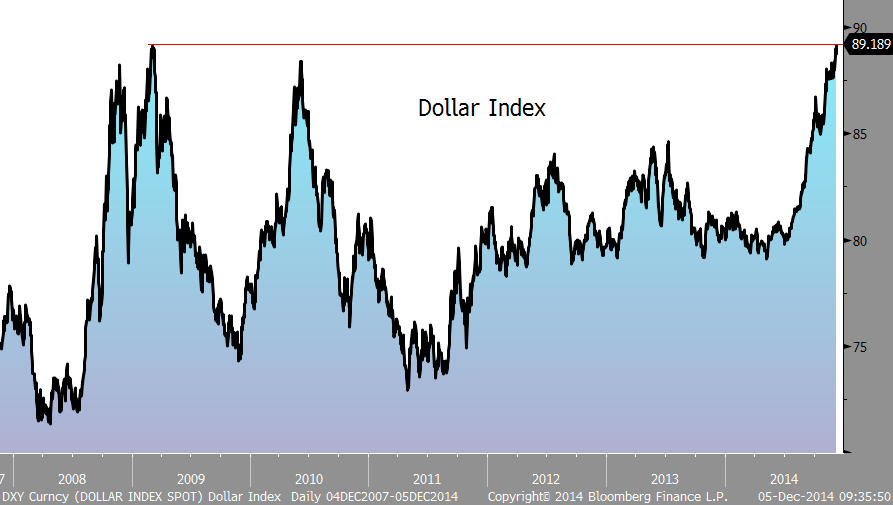 This in itself is disinflationary as far as physical commodities are concerned:

We get the drop in physical or commodity inflation. That is why Gundlach expects CPI to get to zero in 2015. But what about service sector inflation? Ian Shepherdson of Pantheon Macroeconomics had argued on Tuesday November 25 that:

Where is the inflation in domestic services? If the U.S. economy can grow payroll jobs at 300K a month for the next several months without a pickup in service sector inflation, then why would the Fed raise interest rates in 2015? Chair Yellen is a labor economist and she would like to get higher wages into the hands of US workers even at the cost of a bit higher inflation. Unless the Fed will decide to raise to rates “just to see what happens” as Gundlach said last week.

This environment is just about perfect for the U.S. economy – growth steadily moving to a higher step, low inflation, low interest rates. What’s not to like? Simple – the inexorably flattening of the yield curve.

Paul Richards of UBS was clear on Thursday on CNBC FM 1/2:

On the other hand:

The European bond markets are in the Roubini/Richards camp. The Spanish 10-yr fell to 1.80% on ECB Sovereign QE hopes. And German growth keeps getting downgraded.

Can the Dollar fail to keep rallying in the face of all this?

We are clear that we prefer doers to talkers. The tweets below from Thursday afternoon show why:

Kudos to these two gentlemen. They called it a day before the sell-off in TLT after the 321K payroll report on Friday morning. We assume if Mr. Tchir liked 5-30 flatteners on Thursday, he loved them on Friday after another 8 bps of flattening.

Next two weeks could be important for the direction of the Treasury market. The Fed meeting is on December 17 with a press conference by Chair Yellen.If next week’s data doesn’t surprise on the upside, expectations could build about removal of “considerable period” from the Fed statement. Rick Santelli is focused on next 2 days – if the 10-year yield closes above 2,38%, then it could rise swiftly to 2.60%. If it doesn’t, then it could fall to 2.14% by year-end. Dana Lyons revisited his November chart in his tweet:

His chart from November is below: The relationship between stocks & high yield bonds has been discussed for months. The prevailing wisdom is reflected in following tweet:

On the other hand, we have: 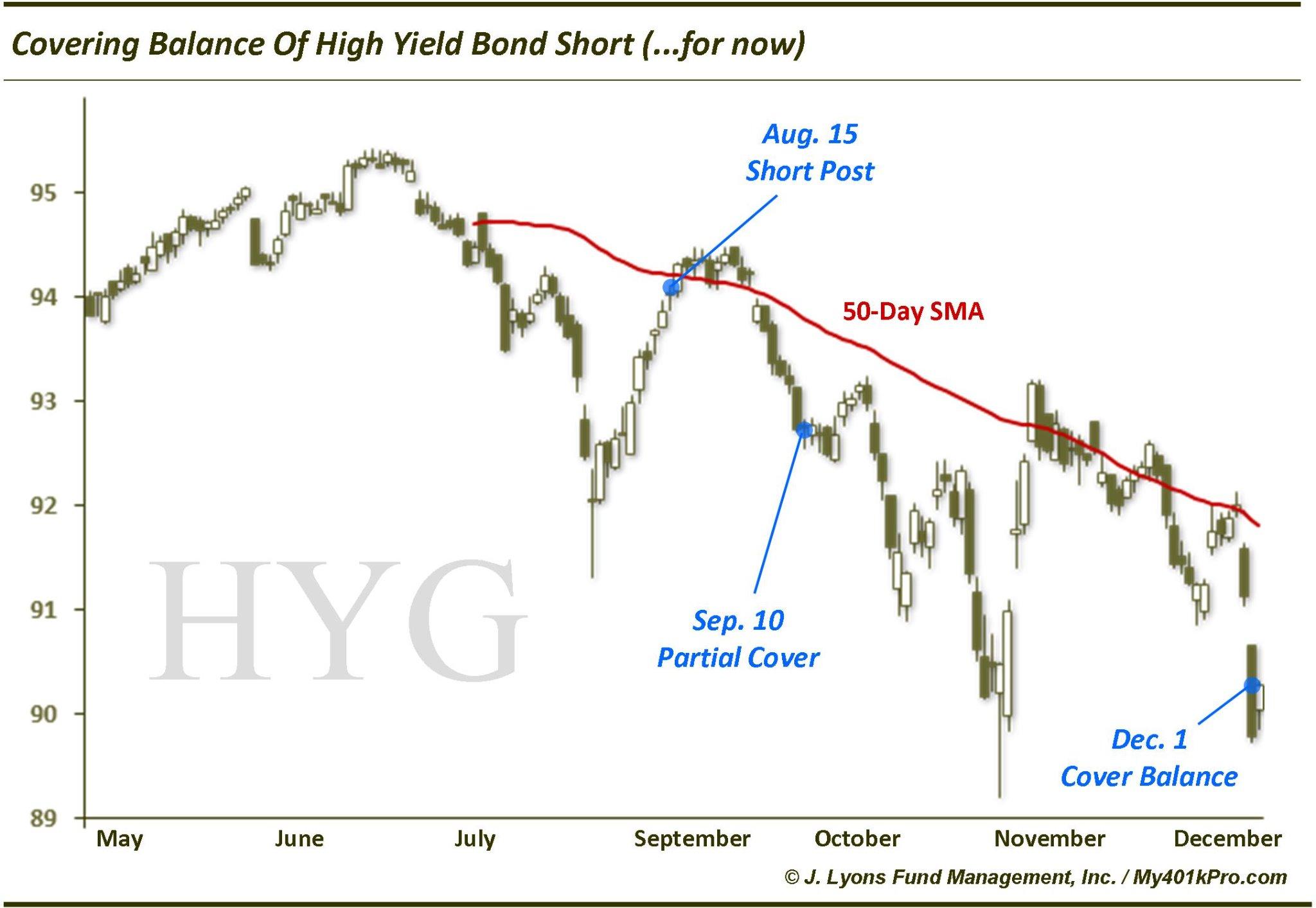 So what happens to the HYG-SPY relationship if HYG now rallies?

Can anything derail this 7-week rally? The markets expects Draghi to come in with QE in January. Kuroda now has greater room to add more QE as Larry Fink said this week. Not really seems to be what both Lawrence MvMillan & Tom McClellan wrote on Friday:

The one force that could create a sell-off is Chair Yellen on December 17. But that is a week & half away. The belief in the “certainty” of seasonality and the rally since October seems to have created extremes of both inflows & bullishness as CEO David Santschi of TrimTabs said on CNBC on Thursday:

But what if the perceived certainty of year-end rally is shaken? 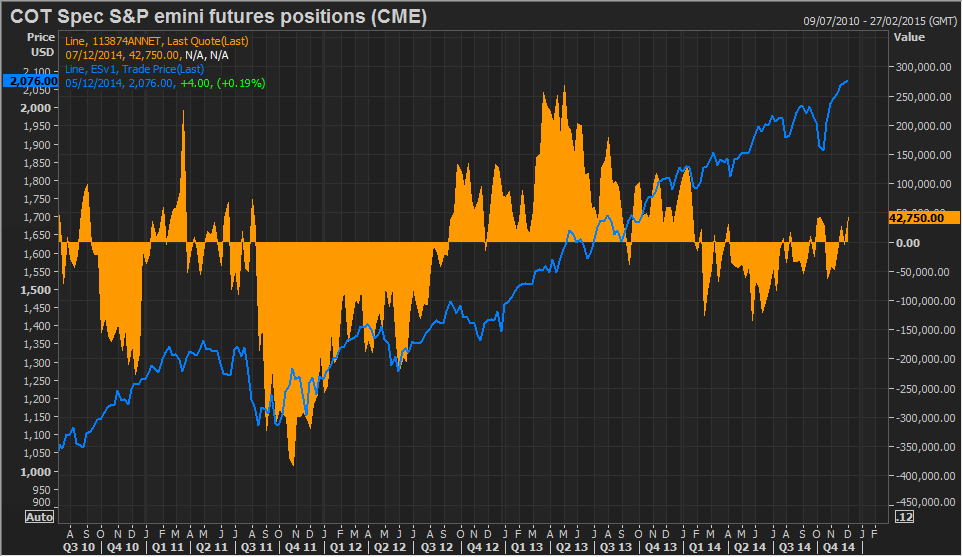 The most interesting action on Friday was the breakout in the banking sector mainly due to the big steepening in the 1-7 year curve: 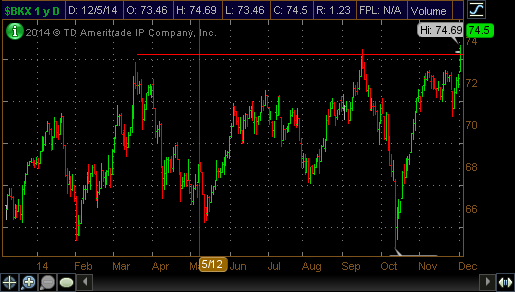 6. Oil
Friday was another bad day for Oil and Oil Stocks capping another non-positive week. Is it time to step in & buy? Tom McClellan seemed to say maybe but not just yet in his article Capitulation Not Over in Crude Oil:
On the other hand, Dana Lyons wrote two posts on Friday – 5 Chart Reasons For A Bounce In Oil Stocks and Energy Fund Assets Run Dry. Both articles are succinct and make for easy reading. The conclusion is:

Below are two key charts from the two articles: 7. Gold & Silver
The big payroll number and the rally in the Dollar hurt Gold, Silver and the miners on Friday. Is it even possible for these precious metals to rally as long as the Dollar is in its stampede? But they did manage a rally on the week with SLV up over 5%. The washout has made a old & correct bear more positive.
A quick summary of what J.C. Parets said his segment with ABC News is:
8. Oil-High-Yield-Fed-Stocks
This is an interesting and possibly a highly important topic. If Oil rallies in the near term, then the issues discussed below will seem less important at least in the near term. But they could come to haunt markets later in 2015. The intersection of these three seemingly segregated issues is simple:
These three gentlemen agree that we will see some defaults in the high yield energy market. Where they differ is in the relative size of the problem and what it may imply for the High Yield Market & the Federal Reserve:
We think all three are correct and will be proven correct at different times. Larry Fink is talking about a long term mega event for the world. Larry McDonald is addressing the short term where we will see corporate defaults in the high yield energy space and perhaps create a contagion that the Fed may have to address. Mark Chandler is addressing the middle phase where M&A opporutnities will rise after the defaults run their course in the high yield energy space.
Isn’t “forewarned is foreprepared” a proverb of sorts? If not, we can always fall back on the neo-classic “chance favors the prepared mind“.
Send your feedback to editor@macroviewpoints,com Or @MacroViewpoints on Twitter